According to Verizon, email fraud accounts for more than 90% of enterprise attacks. Why is email such a popular vector for spreading malware and malicious links?  Because it’s much easier for criminals to convince a human to click on a fraudulent file or link within an email than it is to force their way into a hardened infrastructure.

How Email Spoofing Works: The Structure of Email

However, with email spoofing, a threat actor can put whatever he/she wants into the following fields:

How To Spoof an Email

It is possible for the sender to tinker with the message header and spoof the sender’s identify so the email looks like it is from someone other than Dude1. Let’s break down how.

How To Identify a Spoofed Email 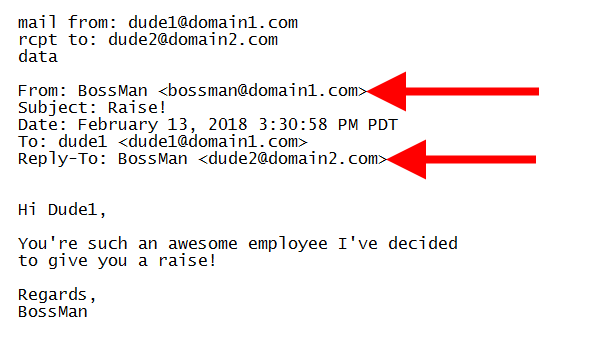 How To Prevent Email Spoofing

Email fraud success relies on human vulnerability. There are many variations of this email scam, however at the core, they are the same: spoof the sender’s identity and use social engineering to convince the victim the email is not from a threat actor, but a legitimate source.  From there, the end goal is usually the same, extracting money from the victim.