Editor’s note: Following publication of this blog, it came to our attention that AhnLab encountered what appears to be an earlier version of SDBbot, described in their recent Q3 ASEC Report as a “malicious SDB file.” AhnLab describes delivery of the malware in South Korean campaigns as a secondary payload to the FlawedAmmyy RAT. TA505 has been active in South Korea in 2019 and frequently distributes the FlawedAmmyy RAT, but we cannot verify the connection at this time.

In September 2019, Proofpoint researchers observed a prolific threat actor, TA505, sending email campaigns that attempt to deliver and install Get2, a new downloader. Get2 was, in turn, observed downloading FlawedGrace, FlawedAmmyy, Snatch, and SDBbot (a new RAT) as secondary payloads.

In this blog post, Proofpoint will detail the tactics, techniques, and procedures (TTPs) associated with these latest campaigns and provide a detailed analysis of Get2 downloader and SDBbot RAT.

These new developments are a continuation of a pattern where, since 2018, Proofpoint researchers observed numerous threat actors increasingly distributing downloaders, backdoors, information stealers, remote access Trojans (RATs), and more as they abandoned ransomware as their primary payloads.

TA505 has been at the forefront of this trend, which began with the distribution of a new backdoor “ServHelper” in November 2018, and a new downloader malware, AndroMut earlier this year.

In addition to the new malware, these campaigns have continued to innovate in other aspects: 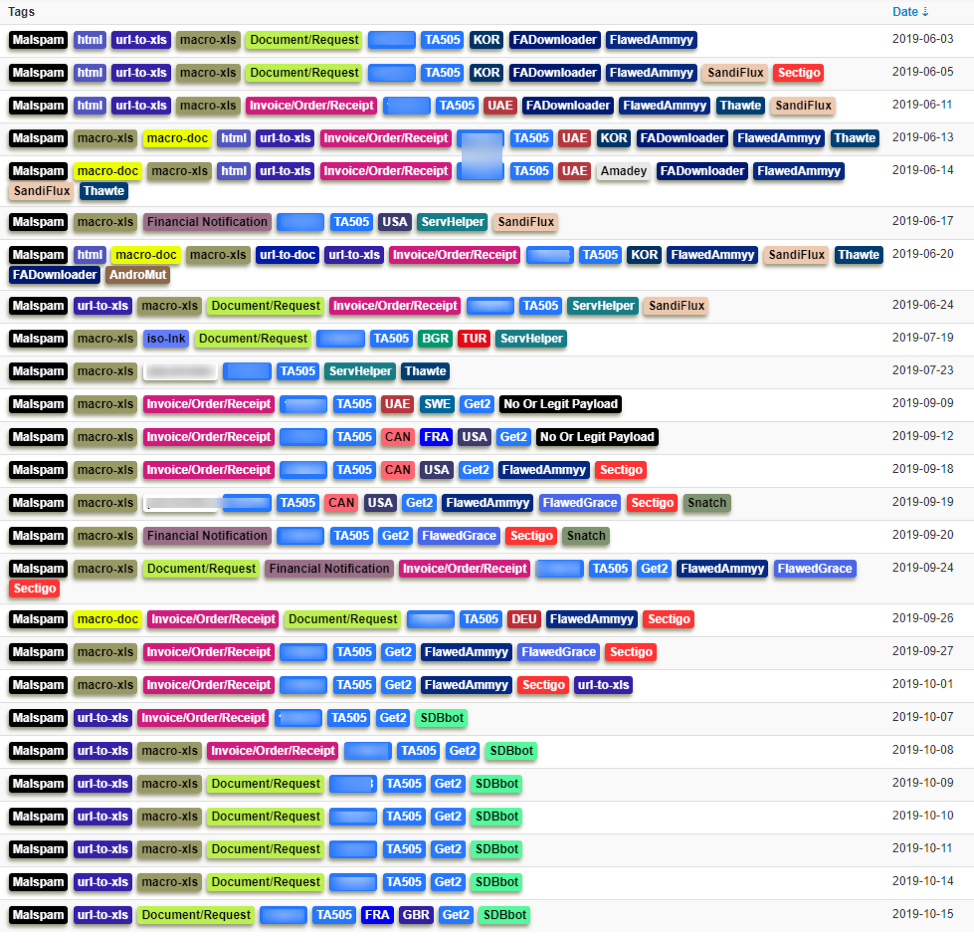 Figure 1: A selected chronology of TA505 malspam campaigns culminating with Get2 and SDBbot in September and October of 2019.

Below are the details of several notable malicious email campaigns.

The emails used the following example subjects and attachment names:

This was the first campaign where the new downloader Get2 was observed. However, in Proofpoint’s testing, the later stage payloads were not observed at the time. 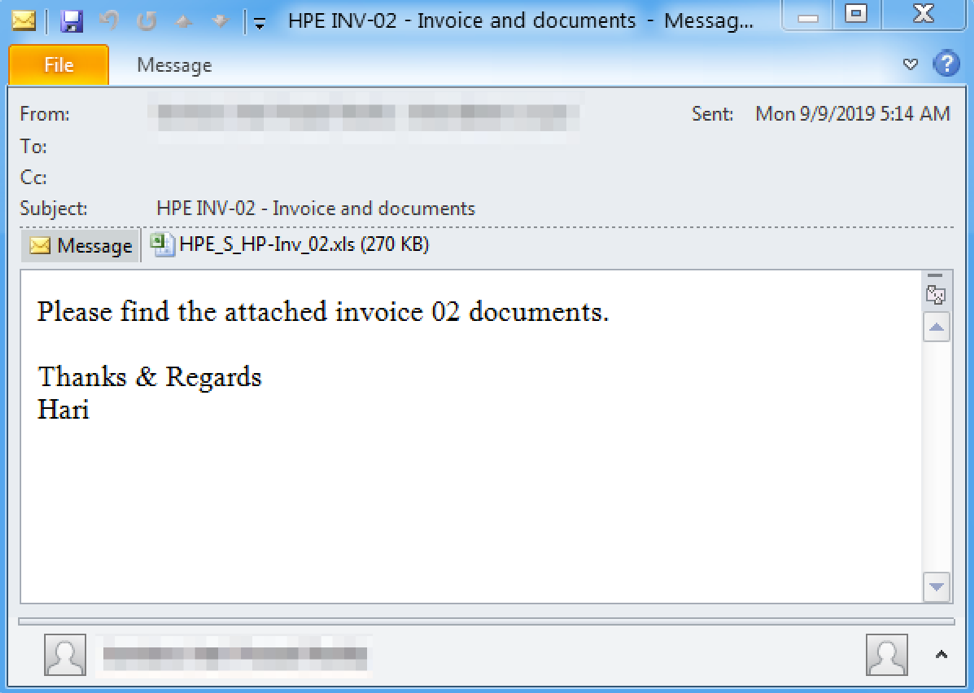 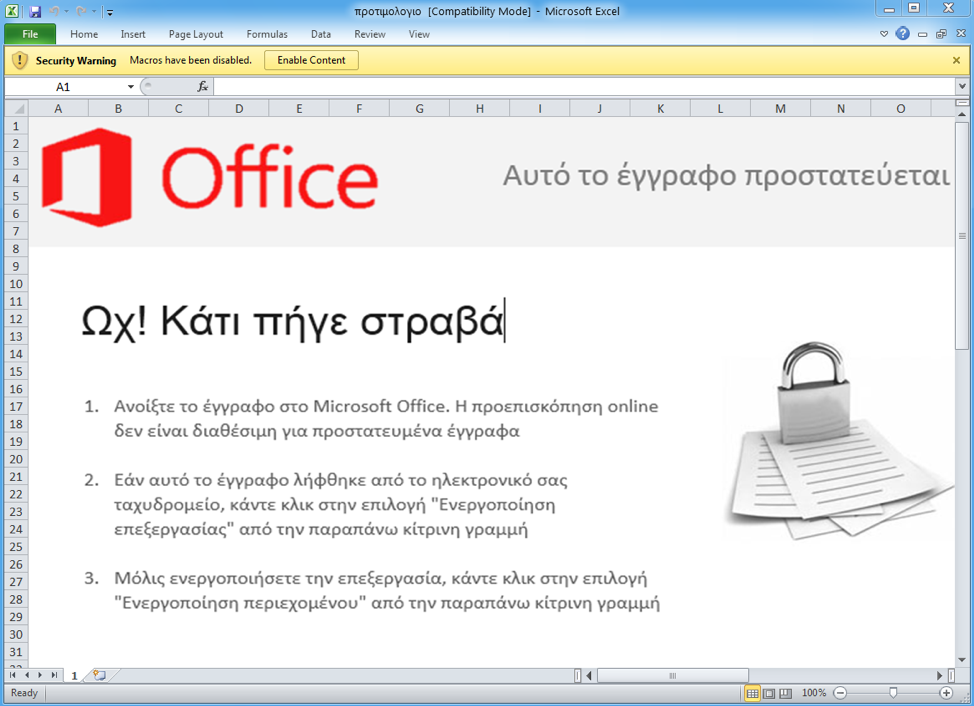 On September 20, we observed hundreds of thousands of emails attempting to deliver Microsoft Excel and .ISO attachments with English and French lures. These emails targeted companies from different verticals in the United States and Canada.

The emails used the following example subjects and attachment names:

In this campaign, Proofpoint researchers again observed the installation and execution of Get2 which in turn downloaded FlawedGrace. 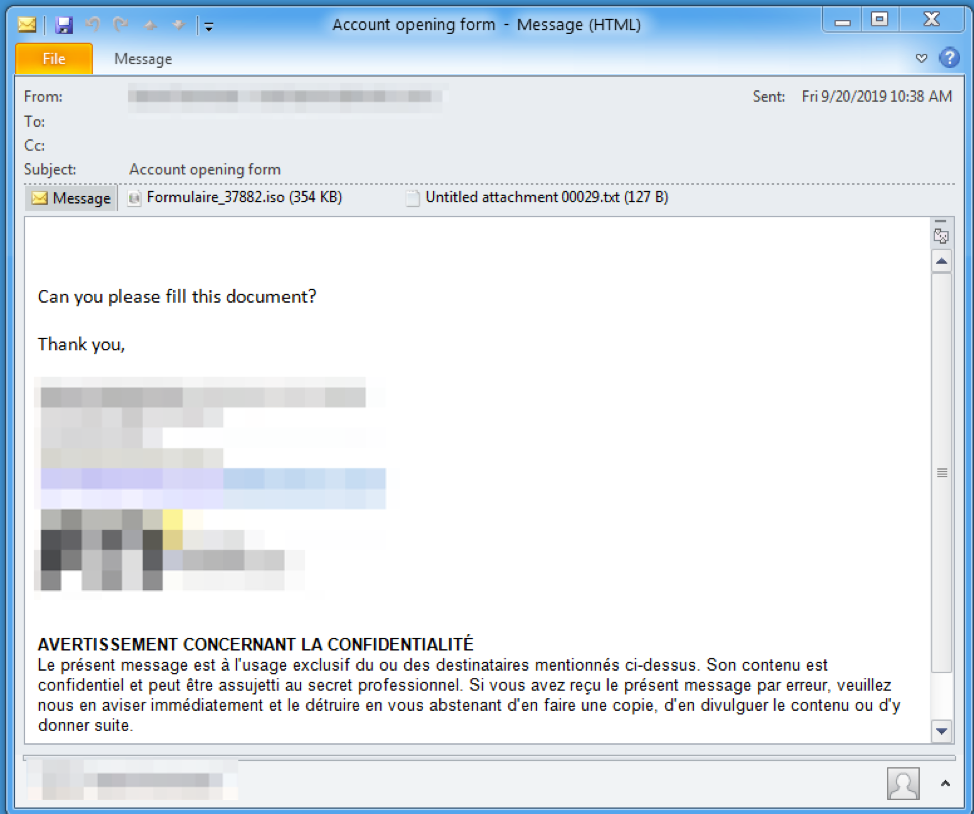 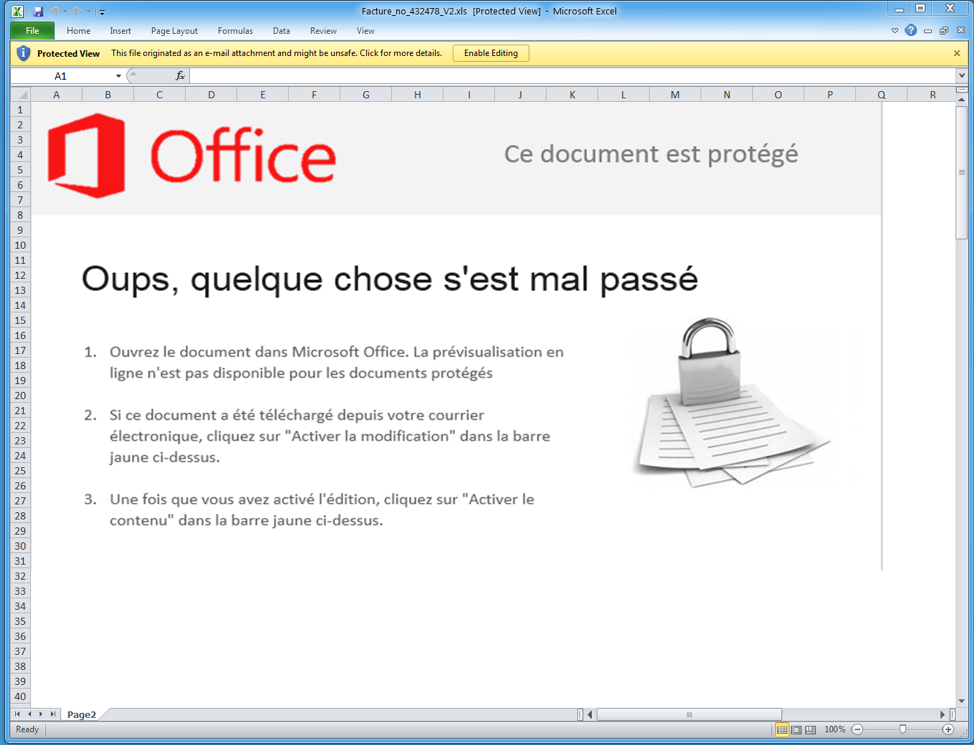 On October 7, instead of directly attached malicious Microsoft Excel files, Proofpoint researchers observed thousands of emails containing URL shortener links redirecting to a landing page that in turn links to an Excel sheet “request[.]xls”. This campaign only used the English language and targeted companies from various industries primarily in the United States.

In this campaign, Proofpoint researchers observed the execution of Get2, which downloaded SDBbot for the first time. 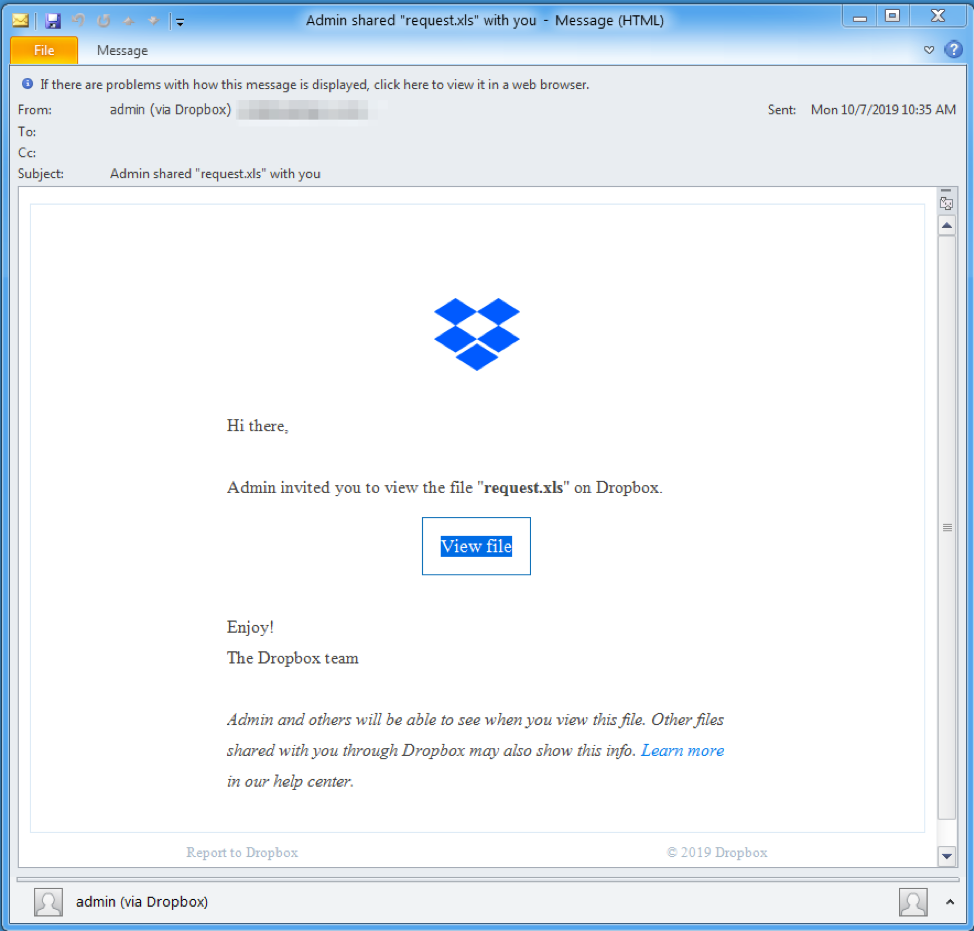 Figure 6: Example email with a Bit.ly URL leading to a landing page that links to download of a malicious document; this uses stolen branding to increase the legitimacy of the shared file lure. 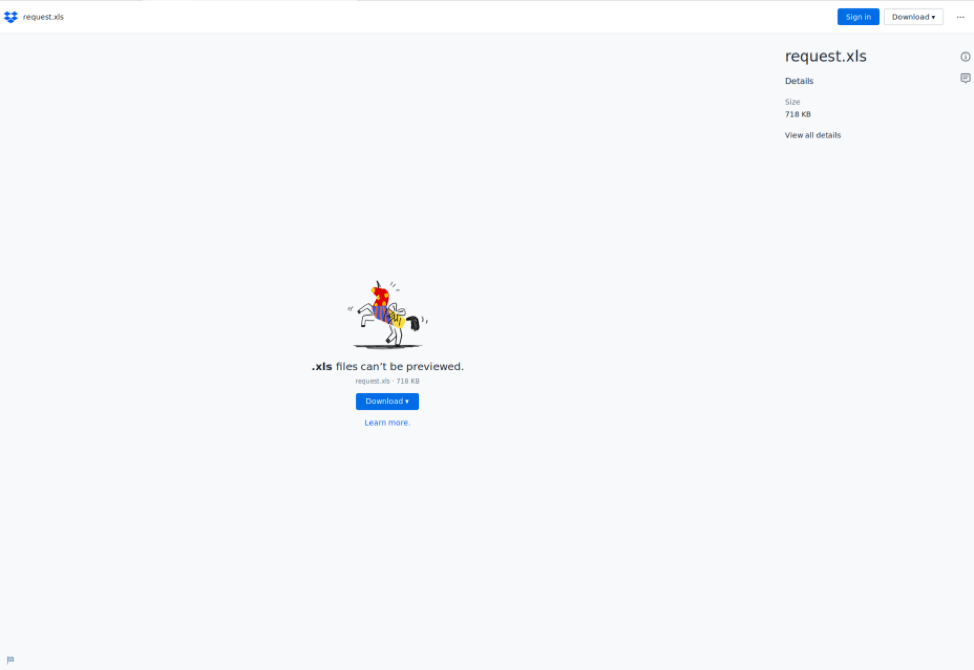 Figure 7: Dropbox-themed landing page with a lure asking users to click a button that links to the malicious document. 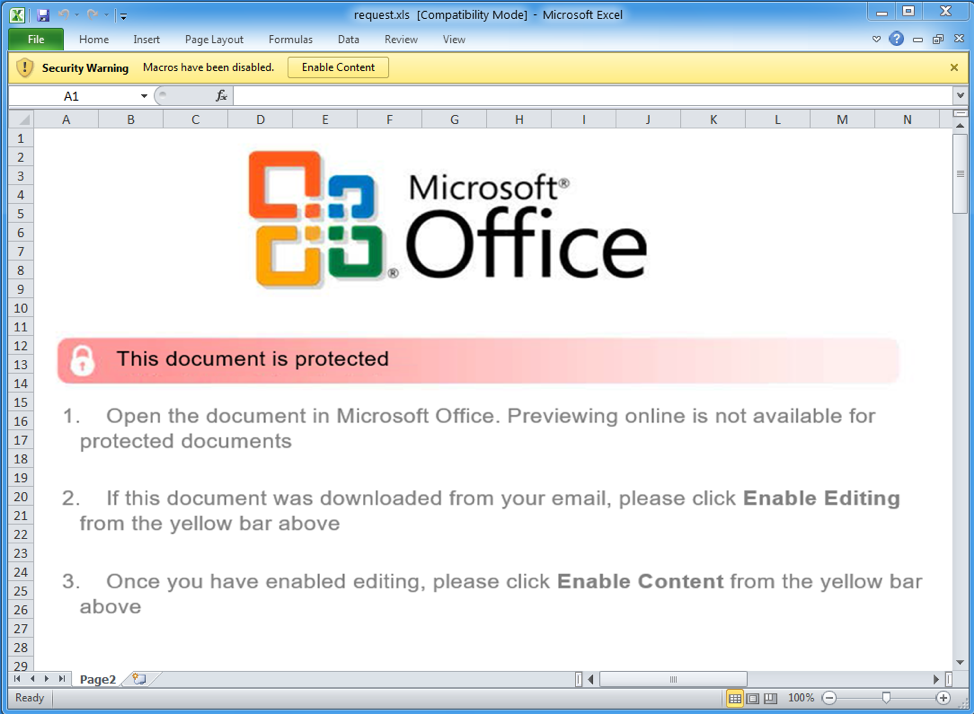 Figure 8: Microsoft Excel spreadsheet with embedded Get2 downloader luring the user to open the document and enable macros.

In addition to TA505’s use of new malware, it should be noted that the new Get2 loader works in conjunction with a new Microsoft Excel macro. Get2 is embedded into the Microsoft Excel file as an object, which can be found as an image icon by scrolling through the document. It is extracted by the macro using the following logic (note that this is an analysis of the September 9 macro and incremental changes were introduced since):

An excerpt from the VBA code from the Microsoft Excel file that performs some of this is shown below. This code appears to be in part borrowed from a Stack Overflow article (except it works to extract a file starting with the “MZ” header instead of “PDF”). 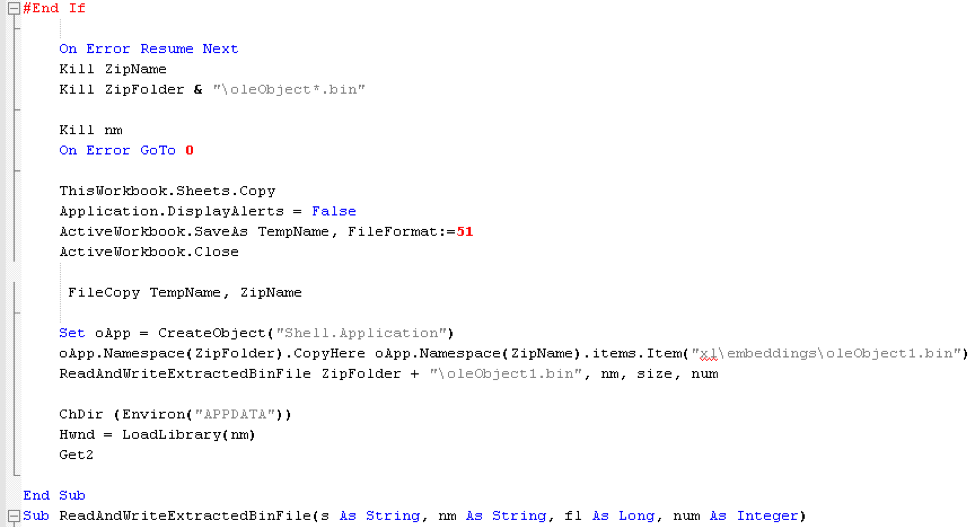 Figure 9: Visual Basic macro code sample from the malicious Microsoft Excel spreadsheet used in conjunction with the Get2 downloader.

Get2 is a new downloader malware written in C++ and used in recent TA505 campaigns. The name is derived from the DLL export name used in the initial sample that was analyzed. Successive campaigns used different export names such as Amway, Hadno, Seven, and Wakeup.

The downloader collects basic system information and sends it via an HTTP POST request to a hardcoded command and control (C&C) server (Figure 10):

Figures 11 and 12 depict some example responses from the C&C server:

The C&C response data is pipe-delimited and each section contains a payload URL and an optional argument delimited by a semicolon.

In earlier observed versions of Get2, it’s payloads were executables run with the argument passed on the command line. In later samples, authors included additional code to check the argument for “RD86” and “RD64” (possibly short for “run DLL”). RD86 indicated the payload was a DLL to be injected and loaded. The system was also scheduled to reboot a random amount of time later (more on the reboot in the SDBbot section below). At the time of research, the RD64 code path had not been implemented, but will likely be similar to RD86 for 64-bit DLLs.

SDBbot is a new remote access Trojan (RAT) written in C++ that has been delivered by the Get2 downloader in recent TA505 campaigns. Its name is derived from the debugging log file (sdb.log.txt) and DLL name (BotDLL[.]dll) used in the initial analyzed sample. It also makes use of application shimming [1] for persistence. SDBbot is composed of three pieces: an installer, a loader, and a RAT component.

The installer stores the RAT component in the registry and establishes persistence for the loader component. In the analyzed sample, the installer was named “SdbInstallerDll[.]dll”. Most of its important strings and data were XOR-encoded with a hardcoded 128-byte key.

A registry value is created at “\SOFTWARE\Microsoft\<random 3 characters subkey>[random 1 character value name]” in HKEY_LOCAL_MACHINE or HKEY_CURRENT_USER depending on user privileges. A binary blob is stored at the value and has the following structure:

If the bot is running with a regular user privilege, persistence is established using the registry “Run” method. The loader DLL component is written to “%APPDATA%\mswinload[.]dll” and a “mswinload” value is added to the “Run” key to execute ordinal #1 of the DLL with rundll32[.]exe.

If the bot is running with admin privileges on a Windows version newer than Windows 7, persistence is established using the registry “image file execution options” method. The loader DLL component is written to “%SYSTEM%\mswinload0[.]dll” and added to the “VerifierDlls” value for “winlogon[.]exe”.

If the bot is running as admin on Windows XP or 7, persistence is established using application shimming [1]. It uses a method very similar to the one described by FireEye in their blog post “To SDB, Or Not To SDB: FIN7 Leveraging Shim Databases for Persistence” [3]. A shim database (SDB) is created (Figure 13) to patch services[.]exe with the loader code and then installed with sdbinst[.]exe:

All three of the persistence mechanisms require a reboot to take effect and there is no additional code to continue executing the loader and RAT components from the installer. Proofpoint researchers speculate that the reboot functionality in the Get2 downloader (described above) is used to continue SDBbot’s execution after installation in the TA505 campaigns.

In the registry-based persistence mechanisms, a separate loader DLL is used to execute the RAT payload. In the analyzed sample, the loader was named “RegCodeLoader[.]dll” and saved to disk as “mswinload[.]dll” or “mswinload0[.]dll”. The application shimming-based persistence doesn’t use a separate DLL, but the code it patches into services[.]exe is similar in functionality. In both cases the random registry key and value name is patched into the loader code.

The loader component reads the binary blob stored in the registry and starts executing the loader shellcode stored there. The shellcode decompresses the RAT payload then loads and executes the DLL.

In the analyzed sample the RAT component was named “BotDLL[.]dll”. It has some typical RAT functionality such as command shell, video recording of the screen, remote desktop, port forwarding, and file system access.

SDBbot stores its C&Cs in a plaintext string or file (“ip.txt”). It uses a plaintext protocol over TCP port 443; an example session is shown in Figure 14:

The bot starts the communication by sending and receiving an acknowledgment DWORD: 0xC0DE0000. It then continues by sending basic system information:

After the malware sends system information, the C&C server responds with a command DWORD. Depending on the command, the C&C server then sends additional arguments. Some of the commands (mostly the shell and video related ones) make use of 48-byte data structures to store various data. There are other commands which create, delete, and query the status of these data structures, so it is defined in Figure 15: 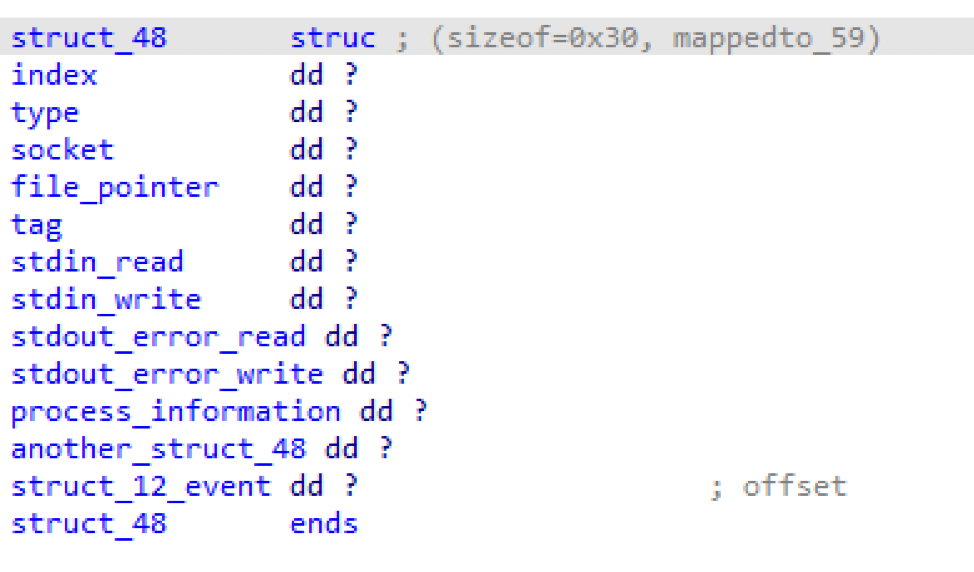 Figure 15: 48-byte data structure used by some of the commands

The available commands are:

TA505 has helped shape the threat landscape for years, largely because of the massive volumes associated with their campaigns through the end of 2017 and 2018. Over the last two years, Proofpoint researchers have observed TA505 and a number of other actors focus on downloaders, RATs, information stealers, and banking Trojans. With this recently observed October 2019 push by TA505 with attacks on a wide range of verticals and regions, the actor’s usual “follow the money” behavioral pattern remains consistent. The new Get2 downloader, when combined with the SDBbot as its payload appears to be TA505’s latest trick (or treat) for the Fall of 2019.