On Jan 29th, 2021, a Twitter user, "TheAnalyst", shared a sample which caught our attention after being notified it triggered an Emerging Threats Network Intrusion Detection System (NIDS) rule.  A quick triage of the sample found overlap with malware tracked internally as CopperStealer.  This external interest caused Proofpoint researchers to investigate further, eventually leading to coordinated disruptive actions by Facebook, Cloudflare, and other service providers.

Our investigation uncovered an actively developed password and cookie stealer with a downloader function, capable of delivering additional malware after performing stealer activity.  The earliest discovered samples date back to July of 2019.  While we analyzed a sample that targets Facebook and Instagram business and advertiser accounts, we also identified additional versions that target other major service providers, including Apple, Amazon, Bing, Google, PayPal, Tumblr and Twitter.

CopperStealer exhibits many of the same targeting and delivery methods as SilentFade, a Chinese-sourced malware family first reported by Facebook in 2019.  Proofpoint believes Copperstealer to be a previously undocumented family within the same class of malware as SilentFade, StressPaint, FacebookRobot and Scranos.  Facebook attributed the creation of SilentFade to Hong Kong-based  ILikeAD Media International Company Ltd and during the 2020 Virus Bulletin conference disclosed it was responsible for over $4 million in damages by “compromising people’s Facebook accounts and then using people’s accounts to run deceptive ads”. 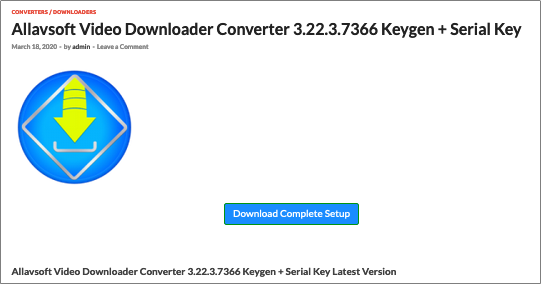 Figure 1: A “cracked” application being hosted which dropped CopperStealer.

During this investigation, Proofpoint researchers worked closely with researchers at Facebook, Cloudflare, and other service providers to coordinate disruptive action.  This included Cloudflare placing a warning interstitial page in front of the malicious domains and establishing a sinkhole for two of the malicious domains before they could be registered by the threat actor.

This sinkhole, a method of concurrently limiting the actor’s ability to collect victim data while enabling researchers to gain visibility into victim demographics, provided valuable insight into the malware’s behavior and scope.  In the first 24 hours of operation, the sinkhole logged 69,992 HTTP Requests from 5,046 unique IP addresses originating from 159 countries representing 4,655 unique infections. The top five countries based on unique infections were India, Indonesia, Brazil, Pakistan and The Philippines.

After approximately 28 hours of operating the sinkhole, the amount of traffic declined sharply. At the same time, it was observed that CopperStealer was no longer being distributed via the keygenninja[.]com website.

Since November 2019, Proofpoint and Emerging Threats have identified this threat as ‘CopperStealer’ and have tracked it internally since then, as well as in ETPRO signatures.  This name originates from observed PDB and process memory strings referencing 'DavidCopperfield' (Figure 2). In January 2021, after other researchers had shown interest in this malware, ESET created specific anti-virus detection for this threat under the name ‘Mingloa’; however, Proofpoint continues to refer to this as CopperStealer.

The malware does make use of several basic anti-analysis techniques to avoid running within researcher systems.

The malware contains the ability to find and send saved browser passwords.  The following Internet browsers are searched specifically for Facebook saved credentials:

All requests created from the analyzed sample contain a static Accept-Language header of "ko-KR,ko;q=0.9,en-US;q=0.8,en;q=0.7".  The analyzed sample produces many lowercased request headers, though this behavior does not appear in all versions (Figure 4).

CopperStealer’s downloader function retrieves a download configuration from the c2 server.  The analyzed sample extracts a 7z archive named xldl.dat (18c413810b2ac24d83cd1cdcaf49e5e1) and then executes one of the extracted files (ThunderFW.exe - f0372ff8a6148498b19e04203dbb9e69) via:

The executed binary appears to be a legitimate download manager called Xunlei created by Xunlei Networking Technologies, LTD, that while legitimate, was previously identified being bundled with malware in 2013 reported by ESET.  CopperStealer uses an API exposed from the Xunlei application in order to download the configuration for the follow-up binary.

The analyzed sample downloads a configuration from the C2 server with a URI path of "/info/dd" (Figure 5).  The download configuration has also been retrieved from alternative URI paths (See Malware Evolution Section below). The configuration returned by the server is encrypted and encoded using the same method as other messages detailed within this report.  The configuration contains details pertaining to the location and execution of the payload (Figure 6). 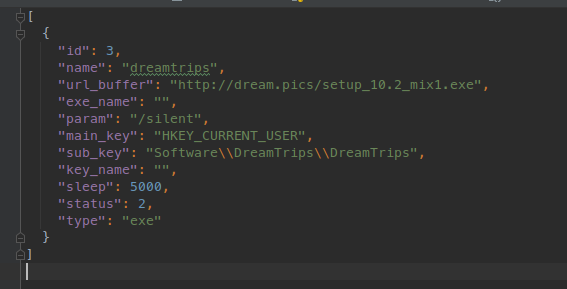 Most recently, Smokeloader has been observed as a downloaded payload from hxxp://dream[.]pics/setup_10.2_mix1.exe.  However, historical network traffic shows a variety of malware being delivered from a handful of urls.

While there are no observed persistence techniques in the analyzed sample, there are several opportunities for host-based detection.

The analyzed sample created a mutex called "Global\exist_sign_install_r3" while other samples have created related mutexes:

The analyzed sample first attempts to open a specific registry key (below) and is later created.  This registry key is used to determine the malware has been previously run on the victim machine and is used when determining the value of "isfirst" flag in the exfiltrated data.

A certificate,  SHA1 Fingerprint=6C:0C:E2:DD:05:84:C4:7C:AC:18:83:9F:14:05:5F:19:FA:27:0C:DD, related to Charles Proxy is loaded into the victim machine's "My" and "Trusted Root" certificates stores.  The existence of this certificate in the "My" certificate store is used when determining the value of the "isfirst" flag in addition to the vindiesel registry key. The Subject Common Name of this certificate contains:

This malware uses HTTP in order to communicate with C2 servers which are generated using a Domain Generation Algorithm (DGA). During investigation into various CopperStealer samples Proofpoint researchers discovered two distinct DGA methods in use, which are detailed below. While the use of TLS has been observed in more recent samples, most communication does not make use of TLS.

Initially reported by "Johann Aydinbas" on Twitter the malware uses a Domain Generation Algorithm (DGA) in order to generate new command and control servers on a daily basis. A Python3 script is publicly available to generate all domains for the observed DGA methods.

The DGA is based on the middle 16 characters of an MD5 hash of a concatenated string of a "seed" and the current UTC date in YYYYMMDD format.  As observed within process memory strings, the analyzed sample utilizes the "seed" of "exchangework" (Figure 7).

As an example, the process of generating the DGA domain for Feb 10, 2021 using the seed of "exchangework" is detailed below:

We identified several different seeds using this domain pattern among other artifacts.   A timeline of seed use can be found in the Malware Evolution section below. 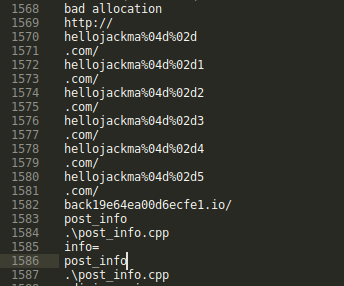 On March 11, 2021, we identified another slight modification in Version 60.0 that resulted in additional DGA domains being generated for each month.  These are the same methods from Version 50.0, but this version included two additional hardcoded domains and extended the DGA domain variants by appending the digits “1” – “10” to the concatenated string.  This results in an “extended” list of domains compared to the Version 50.0 sample.

The analyzed sample exhibits several different types of messages sent to the C2 server. All messages from the client to the server are sent via POST requests using encrypted message content within the "info" key and all decrypted content is `^A` (\x5e\x41) delimited.

The analyzed sample sends status update messages to the HTTP Request URI of `/info/step` via a POST with the key of `info` and the value contains encrypted message data (Figure 9).  The decryption and encoding methods are detailed within the report.

Figure 9: A status update being delivered via an HTTP request made by the malware.

The analyzed sample has the following "status" values:

Figure 10: Decrypted and split content of a status update message.

Figure 11: Facebook Data exfiltrated to the C2 server via “/info/fb” 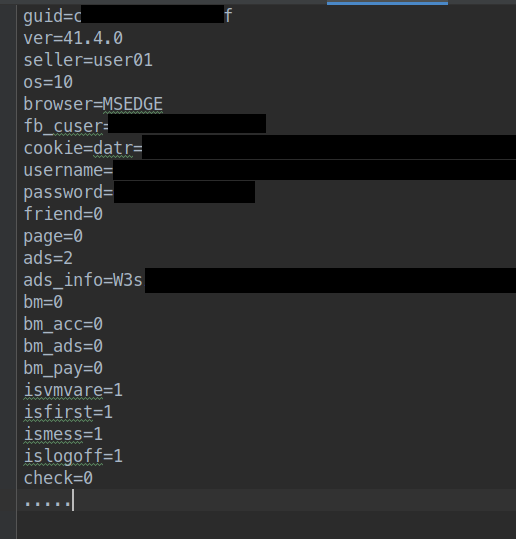 Figure 12:  The decrypted Facebook data sent to the C2 server.

The ads_info key contains a modified base64 encoded string (not encrypted) which decodes to a json string with information of any setup ad accounts (Figure 13).

After completing the downloader function, a downloader specific status update message is sent the C2 server.  These status updates messages are sent using the same encryption method as other messages via a POST requests to "/info/retdl" with the following keys:

Figure 14: Downloader status update being send to the C2 server.

While the malware does not use HTTPS communications, it does leverage DES encryption and a modified base64 encoding.   Within the HTTP traffic, the 'info' form item contains the encrypted details.  Several different key and iv values have been observed (Table 2).

A Python3 script has been created to decrypt the communications using the observed key and ivs.

The first observed sample using the DGA method is associated with Version 10 of the malware. Proofpoint has observed rapid development most recently finding Version 52 first observed on March 5, 2021.

Table 3: A Timeline of DGA Seeds

There have been 80 different versions observed in the year and half CopperStealer has been distributed in the wild. Our investigation found that the release of new versions increased in frequency starting in August 2020 and accelerated between October 2020 and February 2021, with several updates being released every month (Figure 15).

Figure 15: A graph showing the frequency of new version observations.

While the analyzed sample targets Facebook and Instagram, network traffic gathered from other versions indicates other service providers were targeted with unique URI paths that were used for exfiltration (Table 4).

During a brief dynamic analysis of a Ver 51.0 sample (ed21e90c75aec59d0278efb7107f9253) an HTTP request to “/info/r” is made.  The response from the C2 server contains an encrypted partial domain name “amazon.” (Figure 17). The next HTTP request made by the malware is a data exfiltration containing data fields which reference of the amazon URL (Figure 18). 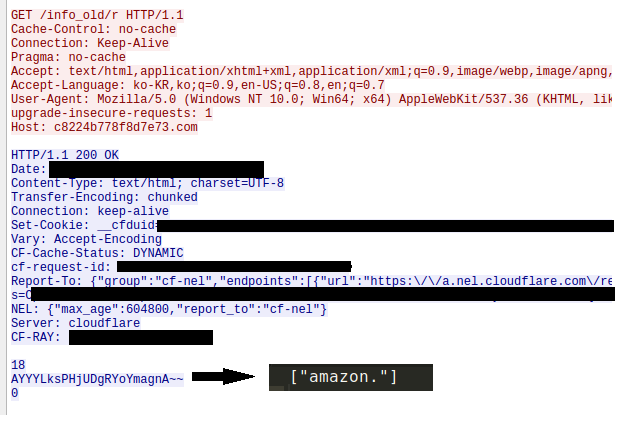 Figure 17:  The C2 server responding with a partial domain.

Starting with Version 47.0 (c2227bff513c463298e61ef82a5c4665) the malware implements hardcoded backup servers in addition to the standard DGA generated domains. The specific hardcoded domains have changed from version to version.  In the case of Version 47.0, the sample introduced hardcoded backup C2 servers from the "changenewsys" seed covering the DGAs for Feb 12, 2021 to Feb 23, 2021 (Figure 19).  The most Version 60.0 sample is configured to use domains in other Top Level Domains (TLDs) such as the .io, .ru and .su. These domains can be found in the Indicators of Compromise section of this report. 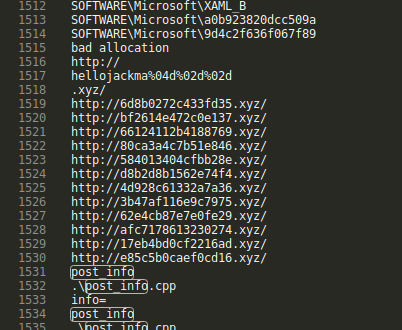 While CopperStealer isn't the most nefarious credential/account stealer in existence, it goes to show that even with basic capabilities, the overall impact can be large. Previous research from Facebook and Bitdefender has exposed a rapidly increasing ecosystem of Chinese-based malware focused on the monetization of compromised social media and other service accounts. Findings from this investigation point towards CopperStealer being another piece of this everchanging ecosystem. CopperStealer’s active development and use of DGA based C2 servers demonstrates operational maturity as well as redundancy. After sinkholing activities helped disrupt CopperStealers current activities, we will continue to monitor the threat landscape to identify and detect future evolutions of this malware.

Proofpoint threat research would like to thank those in the information security research community who share and provide observations for all to use. As described earlier in this post, the collaborative efforts granted us the opportunity to proceed further than just creating detections. Our team encourages researchers to work collaboratively and share information together to move detections, disruption, and research forward. Feel free to reach out via the Emerging Threats feedback portal!