Operation SpoofedScholars: A Conversation with TA453

These connection attempts were detailed and extensive, often including lengthy conversations prior to presenting the next stage in the attack chain. Once the conversation was established, TA453 delivered a “registration link” to a legitimate but compromised website belonging to the University of London’s SOAS radio. The compromised site was configured to capture a variety of credentials. Of note, TA453 also targeted the personal email accounts of at least one of their targets. In subsequent phishing emails, TA453 shifted their tactics and began delivering the registration link earlier in their engagement with the target without requiring extensive conversation. This operation, dubbed SpoofedScholars, represents one of the more sophisticated TA453 campaigns identified by Proofpoint.

In early 2021, a TA453 persona, “Dr.Hanns Bjoern Kendel, Senior Teaching and Research Fellow at SOAS University in London,” used email address hannse.kendel4[@]gmail.com to solicit conversations with targets. The following is a brief summary of an example conversation observed by Proofpoint Threat Research:

TA453 sent an initial email trying to entice the target with a prospective invitation to an online conference on “The US Security Challenges in the Middle East.” TA453 strived to connect with the individual via phone to discuss the invitation; however, after the target hedged and emphatically stated that they wanted a written proposal with the details, TA453 acquiesced with conference specifics. After a little back and forth that verified the target’s interest, TA453 provided a detailed invitation to the fake conference (Figure 1). The conversation concluded with TA453 attempting to get the target to connect via videoconferencing.

Throughout the conversation, Proofpoint identified a few interesting themes:

In addition to Hanns’ solicitations, at least one target received a credential harvesting email to their personal email account. This attempt did not masquerade as Dr. Kendel but did still attempt to harvest credentials from the target. Currently, Proofpoint does not have more information on this specific kill chain.

TA453 targets in Operation SpoofedScholars can be clustered into three main categories that are consistent with the IRGC’s historical collection priorities.

These groupings consistently have information of interest to the Iranian government, including, but not limited to, information about foreign policy, insights into Iranian dissident movements, and understanding of U.S. nuclear negotiations, and most of the identified targets have been previously targeted by TA453. Targeting appeared to be highly selective, with less than ten organizations targeted, according to Proofpoint data.

Once TA453 established a time for the target to activate their invitation, the TA453 persona provided the personalized link to the intended victim. The link led to a “Webinar Control Panel” on a legitimate but compromised website belonging to University of London’s SOAS, a research institution. According to Proofpoint research, while TA453 does appear to have elevated privileges allowing them to create credential harvesting pages at soasradio[.]org, other pages on the site continue to host legitimate SOAS-affiliated content.

TA453 strengthened the credibility of the attempted credential harvest by utilizing personas masquerading as legitimate affiliates of SOAS to deliver the malicious links. The displayed webpage (Figure 2) offers users the ability to use “OpenID” to log in with the following mail providers; Google, Yahoo, Microsoft, iCloud, Outlook, AOL, mail.ru, Email, and Facebook. The website URI was hxxps://soasradio[.]org/connect/?memberemailid= [RedactedInitials of Target]-[String of alphanumeric characters].

When a particular provider is clicked, a pop-up box (Figure 3) displays the actual credential phishing box. Of the options, Google, Microsoft, and Email buttons prefilled the target’s email address. Based on the variety of email providers along with TA453’s insistence that the target log on when TA453 was online, Proofpoint assesses that TA453 was planning on immediately validating the captured credentials manually. 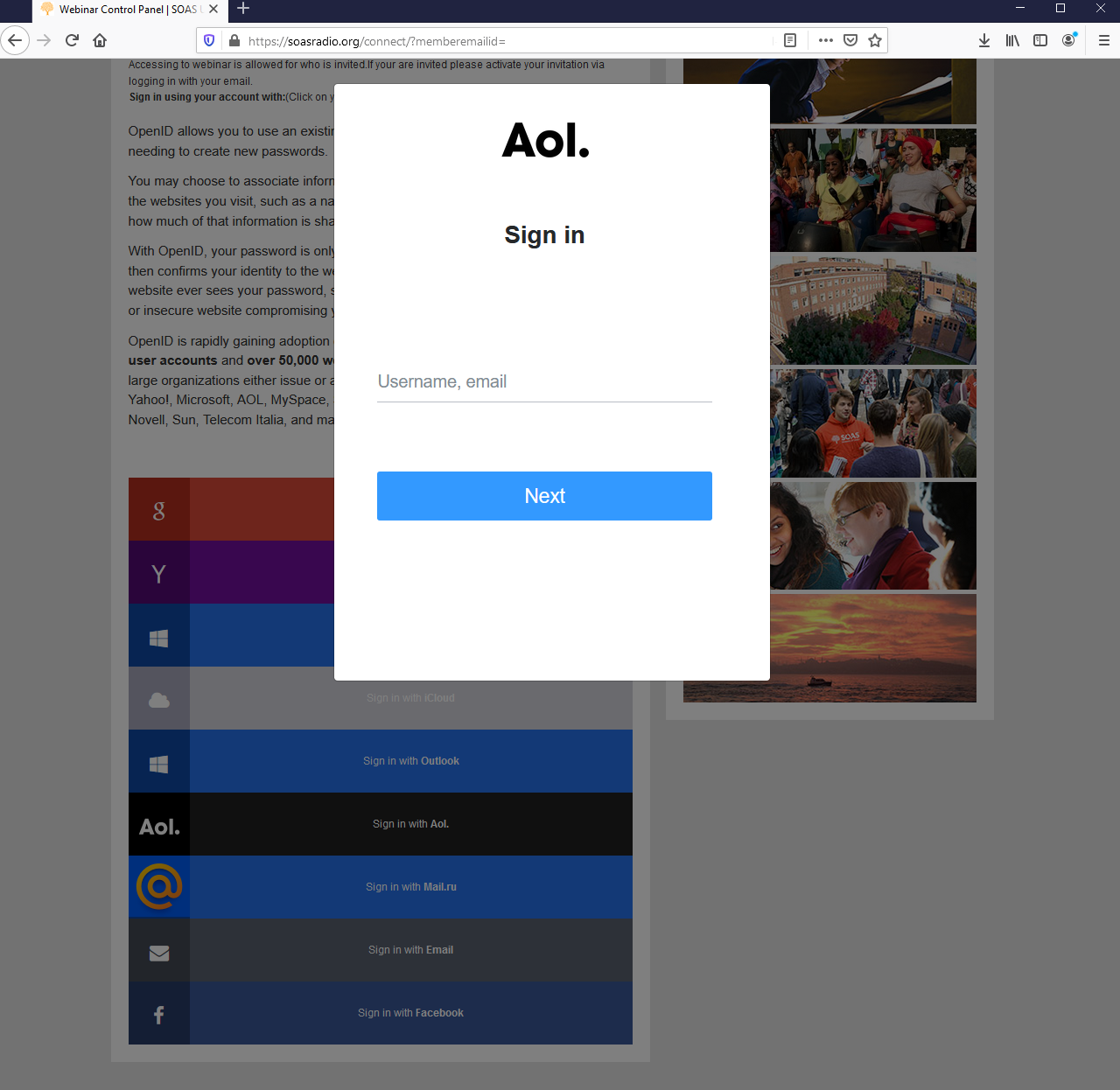 Hanns Kendel was not the only SOAS scholar spoofed by TA453 during Operation SpoofedScholars. Months later, TA453 began spoofing Tolga Sinmazdemir, another individual associated with SOAS. These emails solicited contributions to a “DIPS Conference” and would have likely followed a similar kill chain discussed above. In mid-May, TA453 returned, using a different email (hanse.kendel4[@]gmail.com) to recruit for a webinar.

As discussed previously in Proofpoint’s research on TA453’s BadBlood campaign, Proofpoint analysts cannot independently confirm that TA453 is part of the IRGC. However, the tactics and techniques used by the group and their overall targeting detected by Proofpoint is in line with IRGC intelligence collection priorities, which gives us high confidence in our assessment that TA453 operates in support of the IRGC. The IRGC, specifically the IRGC Intelligence Organization, collects intelligence and conducts operations in support of a variety of assigned responsibilities. According to the Meir Amit Intelligence and Terrorism Information Center’s November 2020 report, some of the IRGC IO’s responsibilities include foiling political subversion, combating western cultural penetration, and supporting the arrest of Iranian dual nationals.

Likewise, attribution specifically for Operation SpoofedScholars is based on TTP similarities to previous TA453 campaigns and consistency with TA453’s historical targeting. TA453 often uses free email providers to spoof individuals familiar to their targets to increase the likelihood of successful compromise. Additionally, as previously discussed, TA453 concentrates their credential phishing to specific individuals of interest to collect intelligence through exfiltration of sensitive email and contacts or initial access for future phishing campaigns.

Broader mitigation efforts against TA453 campaigns include increased awareness and investigation of unusual communication from professional contacts. Academics, journalists, and think tank scholars should practice caution and verify the identity of the individuals offering them unique opportunities, especially if those opportunities occur virtually. Using multifactor authentication provides another layer of protection against TA453 credential harvesting.

TA453 illegally obtained access to a website belonging to a world class academic institution to leverage the compromised infrastructure to harvest the credentials of their intended targets. The use of legitimate, but compromised, infrastructure represents an increase in TA453’s sophistication and will almost certainly be reflected in future campaigns. TA453 continues to iterate, innovate, and collect in support of IRGC collection priorities. While some of the identified selectors no longer appear to be active in TA453 operations, Proofpoint assesses with high confidence that TA453 will continue to spoof scholars around the world in support of TA453’s intelligence collection operations in support of Iranian government interests. Academics, journalists, and think tank personnel should practice caution and verify the identity of the individuals offering them unique opportunities.