Blog
Threat Insight
Look What You Made Me Do: TA453 Uses Multi-Persona Impersonation to Capitalize on FOMO

Look What You Made Me Do: TA453 Uses Multi-Persona Impersonation to Turn FOMO Into a Cybersecurity Risk

As a great songwriter once penned, “everyone needs a friend.” No APT this year has been taking this sentiment more to heart than the Iran-aligned espionage threat actor TA453. Throughout late 2021 and through 2022, Proofpoint researchers have observed TA453, which overlaps with activity tracked as Charming Kitten, PHOSPHORUS, and APT42, continually innovating its approach in a quest to fulfill its intelligence priorities. In late June 2022, this evolution resulted in campaigns utilizing what Proofpoint informally calls Multi-Persona Impersonation (MPI), a subset of Impersonation noted in Proofpoint's Email Fraud Taxonomy framework. In MPI, TA453 takes their targeted social engineering to a new level, targeting researchers with not just one actor-controlled persona but multiple. This FOMO-based cyber-attack allows TA453 to leverage the psychology principle of social proof to prey upon its targets and increase the authenticity of the threat actor's spear phishing. Proofpoint has previously observed this technique from advanced business email compromise actors such as TA2520 (Cosmic Lynx).

It is important to note that for the purposes of this blog, Proofpoint refers to each of the TA453 personas by the sender name. While Proofpoint has previously observed TA453 using compromised email accounts to send phishing emails, Proofpoint has no specific indication that these spoofed individuals were victimized by TA453. Additionally, Proofpoint regularly sees TA453 pair the same spoofed person with different actor-controlled email addresses.

In what Proofpoint researchers consider a standard TA453 campaign, the threat actor masquerades as an individual, such as a journalist or policy adjacent individual, working to collaborate with the intended target. Historically, TA453 has targeted academics, policymakers, diplomats, journalists, and human rights workers. Benign conversations that eventually lead credential harvesting links are hallmarks of TA453 activity. Proofpoint has observed limited instances of TA453 deploying malware.

In almost all cases, TA453 would engage in one-to-one conversations with their targets but this changed in mid-2022.

Proofpoint researchers observed a shift in TA453's approach starting in June 2022. In this first campaign (Figure 1), TA453 started the conversation masquerading as “Aaron Stein, Director of Research at FRPI.” The actor included a variety of questions intended to generate a dialogue about Israel, the Gulf States, and the Abraham Accords. While these questions are generally meant to establish a pretext for sending a follow-up credential harvesting link or to deliver a malicious document, it is also possible they represent intelligence questions tasked to TA453.

In the email, TA453's “Aaron Stein” launched the threat actor's use of Multi-Persona Impersonation (MPI) by referring to and including a “Richard Wike, director of global attitudes research at PEW Research Center” on the CC line. 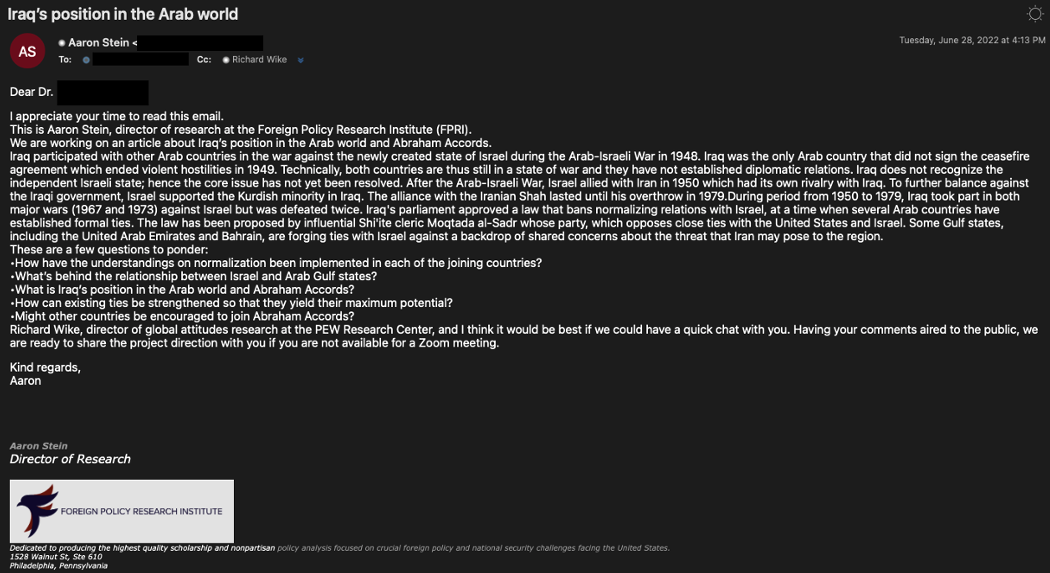 Figure 1. TA453 email posing as an “Aaron Stein, Director of Research at FRPI.”

A day after the initial email, “Richard Wike” responded (Figure 2) to the email thread likely in an attempt to establish the veracity of the request and solicit a response from the target. In this case, no malicious documents or links were observed. 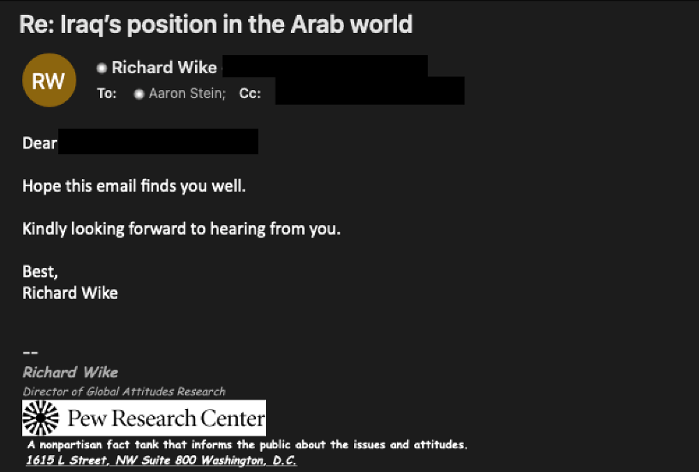 Bringing Up BadBlood: In late June 2022, TA453 reached out to a target specializing in genome research as “Harald Ott” and cc'd two other actor-controlled accounts, “Claire Parry, Assistant Director at the Centre for Universal Health in Chatham House's Global Health Programme” and “Dr. Andrew Marshall, chief editor of Nature Biotechnology,” which made this impersonation attempt a three to one MPI using organ regeneration as a lure. When the target replied to the initial email, “Harald” delivered a OneDrive link that downloaded a malicious Word doc named Ott-Lab 371.docx. The SHA256 for the file is f6456454be8cb77858d24147b1529890cd06d314aed70c07fc0b5725ac84542b. Proofpoint assesses this document represents the latest iteration of TA453's exploitation of Remote Template Injection previously reported by PwC. The template and its macros, dubbed Korg by Proofpoint, will be discussed later in this report. 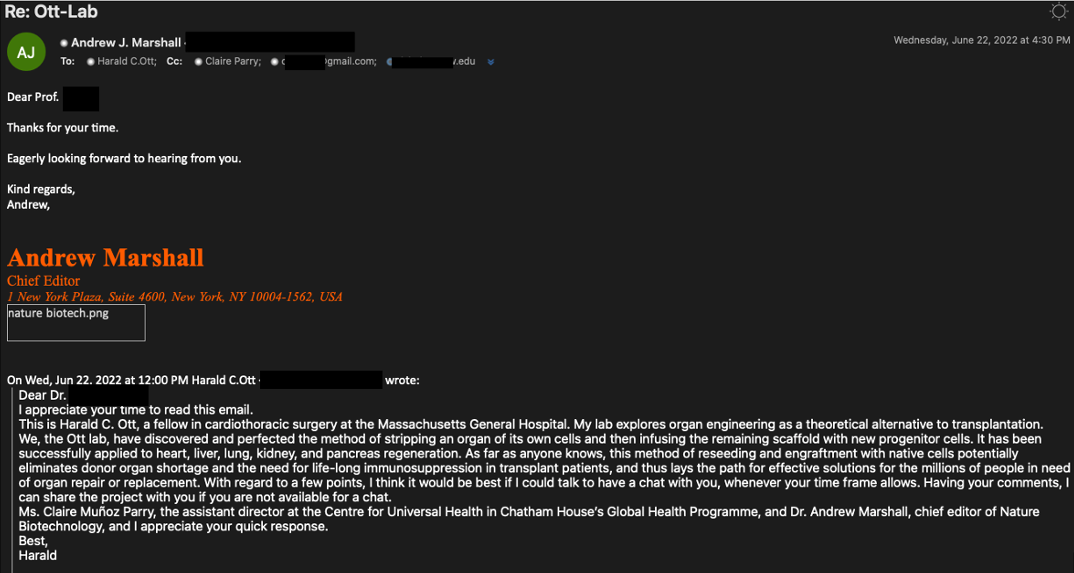 Figure 3. Screenshot of TA453 using one of its cc'd personas to further the ruse targeting a medical researcher.

While the targeting of medical personnel, specifically those involved in genome research, is not a frequent area of focus for TA453, it is not the first time this actor has demonstrated an interest in this type of research. In December 2020, TA453 conducted a phishing campaign targeting medical researchers, as detailed in Proofpoint's BadBlood blog.

Group Project: In June 2022, TA453's “Carroll Doherty” persona reached out to a prominent academic involved in nuclear arms control about a possible US versus Russia clash. This campaign ended up representing an evolution of TA453's MPI technique as the persona did not stop at reaching out to just one target but reached out to two targets at the same university. “Carroll” also cc'd three other TA453 personas on the email: “Daniel Krcmaric,” “Aaron Stein,” and “Sharan Grewal.”

One of the targets responded initially to the outreach email but then ghosted “Carroll.” After the target failed to respond for a little over a week, “Carroll” kindly provided a OneDrive link to the article referenced in the original email (Figure 5). The link downloaded a document titled “The possible US-Russia clash.docx” SHA256: 16a961475a88313478bc2406d6b442be9809e64ea9e2a4754debcce9200cf36b. 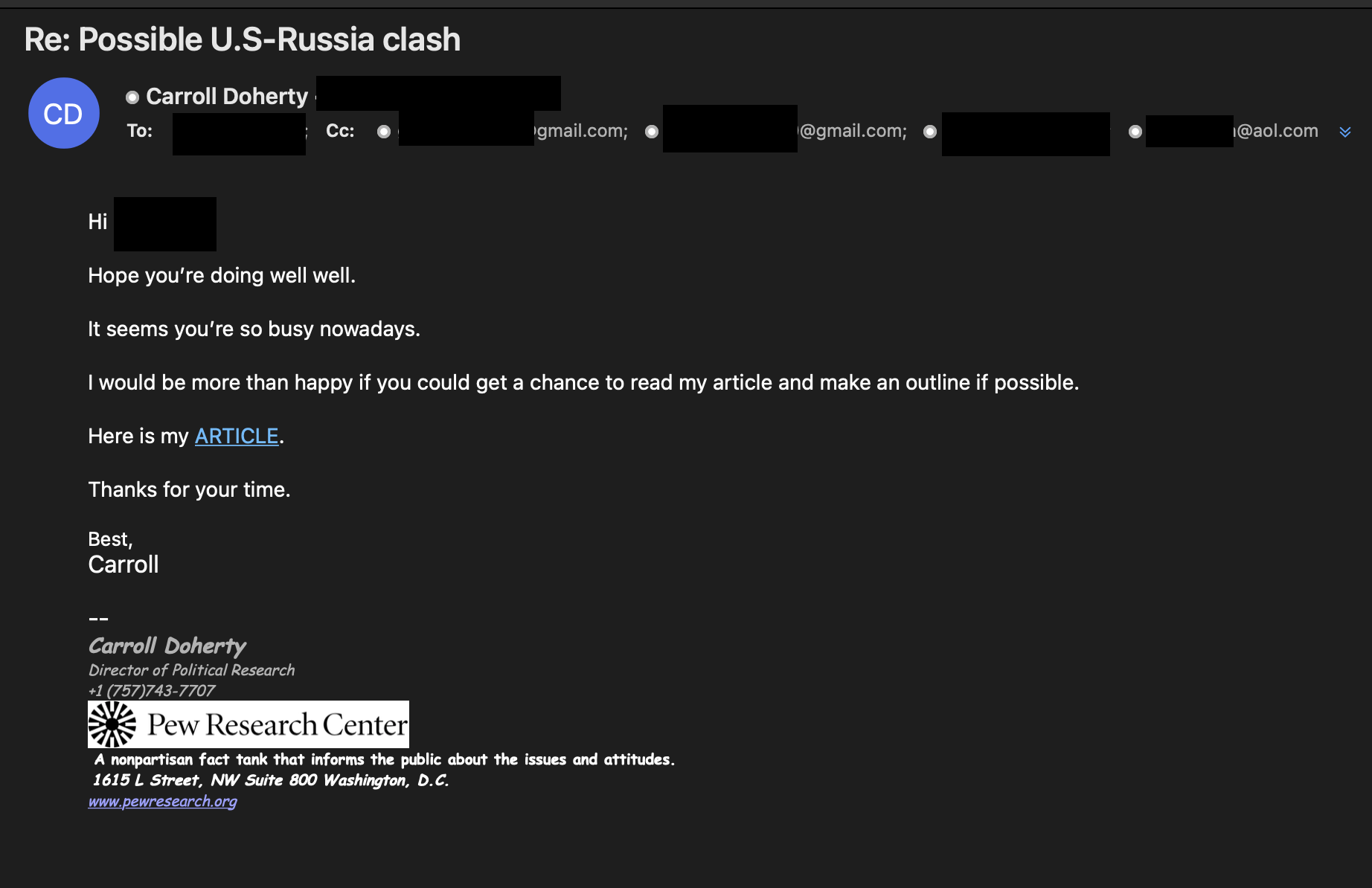 “Carroll” sent the password separately and followed up with the target to let them know the document is secure because it cannot be read without the password. Four days later, one of the cc'd TA453 personas, “Aaron Stein,” dropped “Carroll” from the email thread, apologized to the target, and resent the same OneDrive link and password (Figure 6).

Figure 6. A cc'd TA453 persona attempting to convince a target of the legitimacy of the campaign.

As noted above, some of TA453's campaigns delivered OneDrive links that hosted malicious documents. The documents are the latest version of the TA453 remote template injection documents discussed by PwC in July 2022. The password protected documents downloaded the macro enabled template documents from 354pstw4a5f8.filecloudonline[.]com. Proofpoint observed multiple campaigns reusing that specific filecloudonline[.]com host. The downloaded template, dubbed Korg by Proofpoint, has three macros: Module1.bas, Module2.bas, and ThisDocument.cls. The macros collect information such as username, list of running processes along with the user's public IP from my-ip.io and then exfiltrates that information using the Telegram API.

At this time, Proofpoint has only observed the beaconing information and has not observed any follow-on exploitation capabilities. The lack of code execution or command and control capabilities within the TA453 macros is abnormal. Proofpoint judges that infected users may be subject to additional exploitation based on the software identified on their machines.

Proofpoint continues to assess that TA453 operates in support of the Islamic Revolutionary Guard Corps (IRGC). This assessment is based on a variety of evidence, including overlaps in unit numbering between Charming Kitten reports and IRGC units as identified by PwC, the US Department of Justice indictment of Monica Witt and IRGC-affiliated actors, and analysis of TA453 targeting compared to reported IRGC-IO priorities.

Proofpoint tracks multiple subgroups of TA453 differentiated primarily by victimology, techniques, and infrastructure. Some subgroups in their typical campaigns will engage in benign conversations with targets for weeks before delivering malicious links. Conversely, another subgroup tends to immediately send a malicious link in the initial email.

While the mere presence of specific indicators does not definitively condemn an email as TA453, indicators of a possible TA453-linked persona include:

All threat actors are in constant states of iterating their tools, tactics, and techniques (TTPs), advancing some while deprecating others. The use of MPI by TA453, while the group's latest technique, is likely to continue to evolve and morph as this group hunts for intelligence in support of the IRGC. Proofpoint researchers have already started to observe this potential next step with TA453 attempting to send a blank email, then respond to the blank email all while including all their “friends” on the CC line. This is likely the threat actor's attempt at bypassing security detection.

Researchers involved in international security, particularly those specializing in Middle Eastern studies or nuclear security, should maintain a heightened sense of awareness when receiving unsolicited emails. For example, experts that are approached by journalists should check the journalist’s or their publication’s website to see if the email address belongs to them.