AbaddonPOS: A new point of sale threat linked to Vawtrak

Point of sale (PoS) malware has been implicated in some of the biggest recent data breaches, striking retailers, restaurants, hospitality and organizations from a variety of industries, and often targeting consumers in the US. [1] Once considered too difficult to carry out to be practical for cybercriminals, the retail breaches of late 2013 demonstrated that these attacks are both feasible and highly profitable for cybercriminals, and PoS malware has since continued to evolve and grow in both variety and sophistication. [2]

Proofpoint threat researchers recently detected a new addition to PoS malware landscape. Named AbaddonPOS by Proofpoint researchers, this sample was initially discovered as it was being downloaded in the process of a Vawtrak infection. This use of additional payloads to enhance attack capabilities offers another example of efforts by threat actors to expand their target surfaces through the delivery of multiple payloads in a single campaign, in this case by including potential PoS terminals. This post will analyze AbaddonPOS; discuss the observed infection vectors; and expose, details on the downloader used to retrieve this new PoS malware. We will also provide evidence to demonstrate that the downloader malware and PoS malware are closely related, perhaps even written by the same actor or actors.

On October 8, Proofpoint researchers observed Vawtrak [3] (project ID 5) downloading TinyLoader, a downloader that uses a custom protocol for downloading executable payloads from its command and control (C2) server. TinyLoader was then used to download another downloader in the form of shellcode, which then downloaded AbaddonPOS. Although this infection vector was initially specific to Vawtrak’s project ID 5, we have also since observed it delivered in project IDs 6, 9, 10, 12, and 13. The project ID’s are most easily observed with Vawtrak C2 traffic, as they are stored encoded in the PHPSESSID cookie value. Using the cookie value we provided as an example in our research on Vawtrak enables us to see it in a decoded state (Fig. 1). Bytes 4-7 contain the project ID in little-endian byte order. 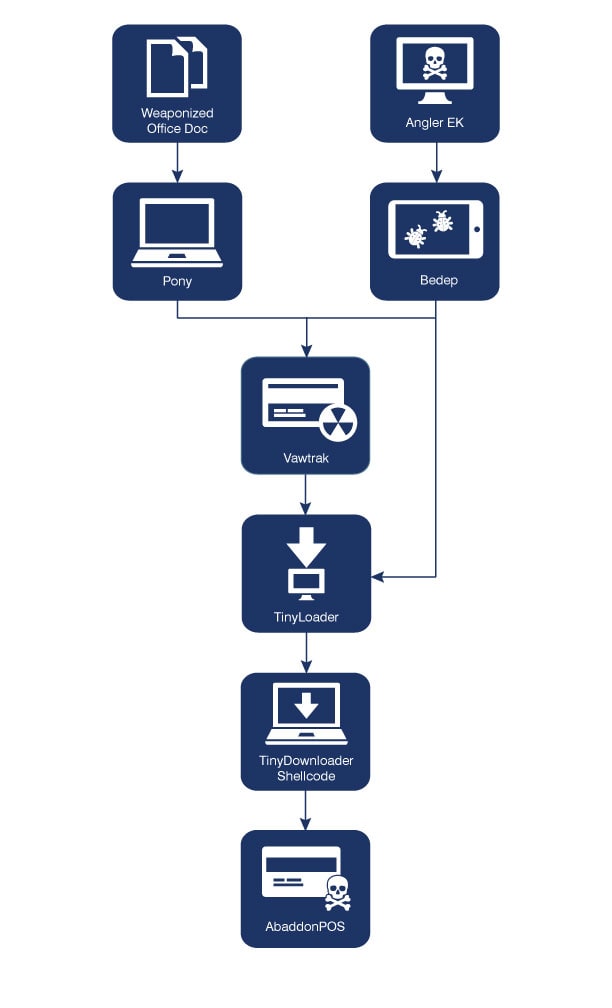 TinyLoader’s sole purpose in this infection chain is to retrieve executable instructions from the C2, which allows the attackers to execute their own custom shellcode on infected machines in addition to downloading and executing additional malware payloads. True to its name, TinyLoader is typically 2-5KB in size. One notable characteristic of TinyLoader is that prior to contacting its single hardcoded C2 IP address, the malware will first check to see if it is running as an x64 or x86 process using the IsWow64Process Windows API (Fig 3.). TinyLoader selects a value based on the result of this API call, and the result is then used to tell the C2 which executable code should be downloaded to the infected client.

As shown in Figure 3 above, 0x84 is used with x86 processes while 0xBA is used with x64 processes; however, the values used for each architecture vary depending on the variant. Once the correct architecture is selected, TinyLoader builds a packet to send to the C2 to initiate the payload download process. Prior to retrieving the downloader that downloads AbaddonPOS, we have observed TinyLoader first retrieve a copy of itself (this step may vary slightly), which is then used as a persistence method by adding a registry key to HKLM\SOFTWARE\Microsoft\Windows\CurrentVersion\Run (Fig. 4). TinyLoader may also download a DLL version of itself, in which case the registry key observed is similar to the following: regsvr32.exe /s “C:\PROGRA~2\[a-zA-Z0-9]+\.dll”

Once the persistent payload is written to disk, another payload is downloaded by TinyLoader in the form of shellcode (Fig. 5), the purpose of which is to manually craft a HTTP request that is then used to download an AbaddonPOS payload (Fig. 6). 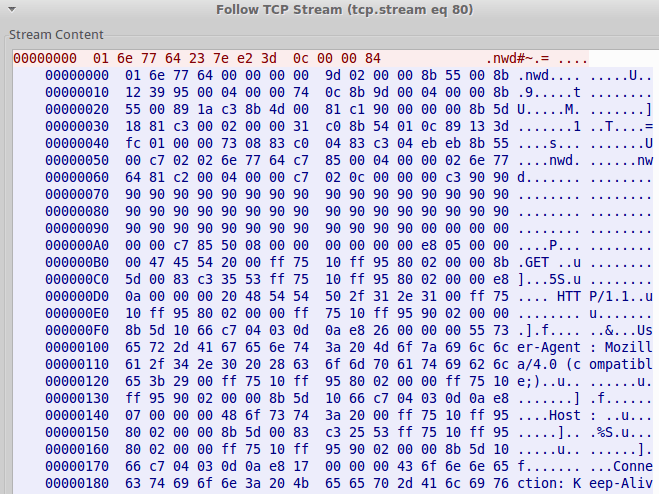 AbaddonPOS is another addition to the PoS malware category, which has attracted a significant amount of attention from malware authors over the years. [4] Similar to TinyLoader, AbaddonPOS is a relatively small package, with most samples being 5KB in size. While the core functionality of this new addition is fairly simple, it contains several features that merit analysis and further discussion: anti-analysis, code obfuscation, persistence, locating credit card data, and a custom protocol for exfiltrating data.

Most of AbaddonPOS’ code is not obfuscated or packed, with the exception of the code used to encode and transmit stolen credit card data. This shellcode is encoded using a 4-byte XOR key; however the key is not hardcoded. Instead, using the first 4-bytes of the decoded shellcode, the malware iterates over all possible 4-byte XOR keys until the correct one is found by checking the result against the hardcoded instructions: 0x5589E58B (Fig. 8). Once the XOR result matches the hardcoded instructions, then the correct key has been found and the malware continues to decode the shellcode using that key.

AbaddonPOS searches for credit cards by reading the memory of all processes except itself by first blacklisting its own PID using the GetCurrentProcessId API. To find credit card data, AbaddonPOS roughly follows this process:

The AbaddonPOS sample with md5 hash: f63e0a7ca8349e02342c502157ec485d was analyzed for the process above. The slightly older version of AbaddonPOS may contain slightly modified functionality, including not allowing “D” as a track 2 delimiter.

Although many of the different PoS malware families rely on HTTP to exfiltrate data, AbaddonPOS uses a custom binary protocol. Communication and exfiltration of credit card data is carried out by the decoded shellcode discussed above. A single hardcoded IP address is used as the C2 address, as well as the encoding routine that is used to obfuscate exfiltrated data. An example of the network traffic generated during a single credit card data exfiltration attempt is shown in Figure 9.As a result of this analysis, Proofpoint created and published ET Pro IDPS signatures (ID’s 2814677-2814680) to detect exfiltration attempts on October 30.

To encode the data, the malware first XORs four bytes of the plaintext with the process handle, followed by a second XOR with a hardcoded 4-byte key. The exfiltration network traffic in Figure 9 is shown in its plaintext state in Figure 10.

The following Python script can be used to decode the network traffic, provided it has been encoded using the technique described above:

Of the samples Proofpoint researchers have discovered and analyzed so far, very few samples seem to have had any functionality added or removed. While “devil_host” is the most prominent mutex used by this malware, we have also found a sample that uses “devil_kor” (md5, a55843235cd8e36c7e254c5c05662a5b), and another that uses “DeviL_Task” (md5, ac03e0e9f70136adede78872e45f6182). We also observed a slightly updated version of AbaddonPOS (see IOCs) where almost all functionality was relocated to the encoded shellcode. In these updated samples the mutex “MG_REX” was used and the credit card search algorithm was also modified by adding ‘D’ as a valid track 2 delimiter.

TinyLoader has now been in development for at least a year, with a first sighting reported on January 16, 2015. Over the past year, TinyLoader has undergone several developmental changes, including:

The similarities with code excerpts including a timeline according to Proofpoint data are provided below (Fig. 11). 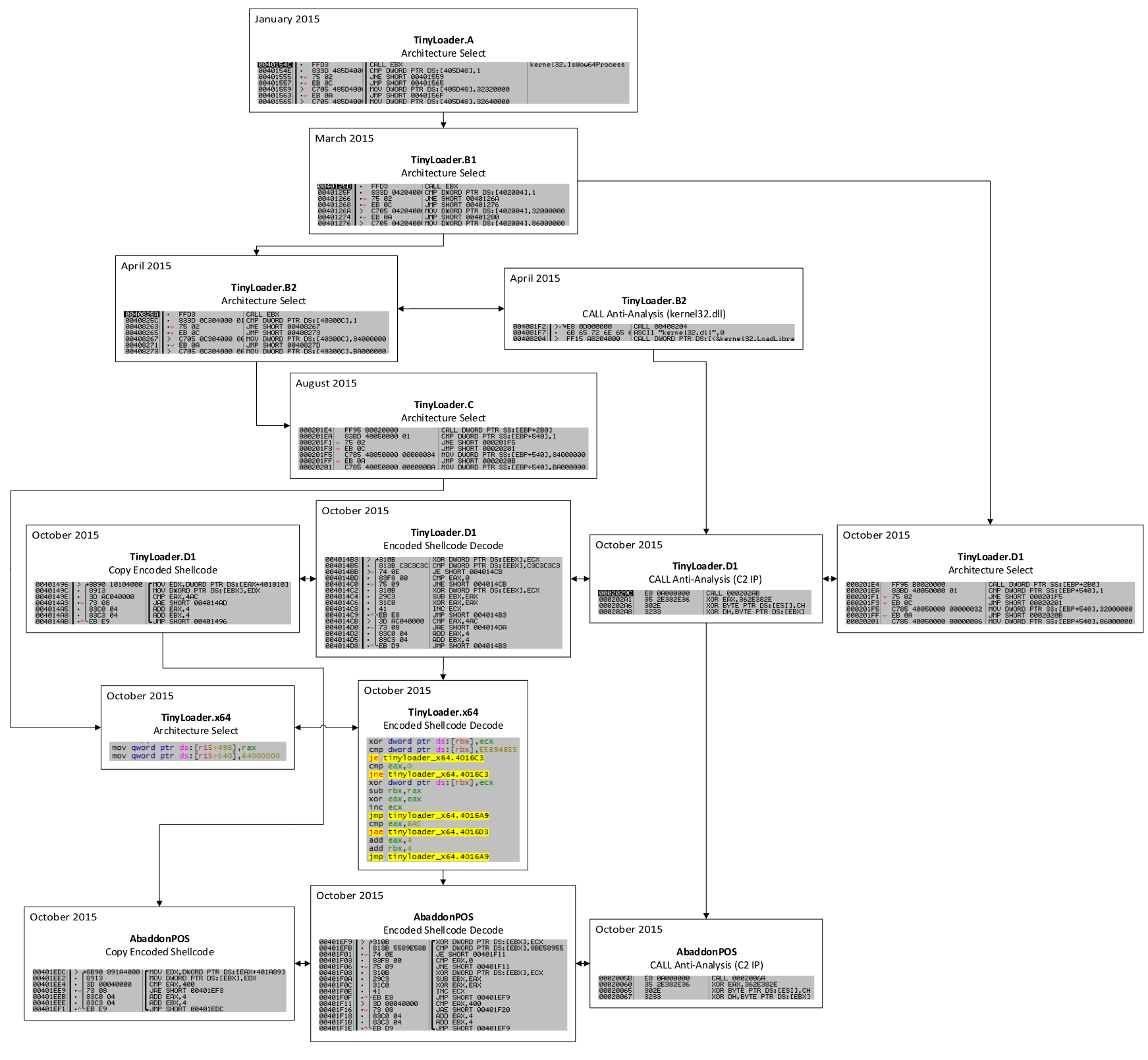 The practice of threat actors to increase their target surfaces by leveraging a single campaign to deliver multiple payloads is by now a well-established practice. While using this technique to deliver point of sale malware is less common, the approach of the US holiday shopping season gives cybercriminals ample reason to maximize the return on their campaigns by distributing a new, powerful PoS malware that can capture the credit and debit card transactions of holiday shoppers.

Further research on TinyLoader and AbaddonPOS turned up samples indicating that this threat has been in the wild since at least August 2015. The current earliest known samples of AbaddonPOS include:

The earliest versions of AbaddonPOS are distinguished primarily by fact that it first targets track data delimiters ("=" and "^") for finding potential credit card data instead of a beginning number ("3", "4", "5", and "6").

The primary difference between these versions and the AbaddonPOS version analyzed in the original post is that these other versions contain a process blacklist: these processes will not be scanned for credit card data. The implementation is unique in that it searches only the first four bytes of each process; if those four bytes match, then it will search two more; and if those match as well, that process will be skipped. (Fig. 12) The blacklist contained the following partial process names:

Other malware that are likely used by these actor(s) include:

These actors may have also employed CryptoWall at some point, as the imphash for 227e6b1f3e66f00a4fc683d4f39da904 matches the imphash for a known CryptoWall sample (md5: 2af149845f4d1ce8e712622d3f1ec46e). Both samples are packed, so it is possible that two actors utilized the same packer/crypter or packing/crypting service.