In the course of our investigation, we shared our findings with fellow researchers in the security community in order to accelerate identification of the exploit. A colleague at FireEye determined  [4] that the exploited vulnerability was unknown. Adobe was promptly notified of the issue, and they verified that although  a mitigation integrated in 21.0.0.182 appeared to cause the exploit to fail, it was a previously unreported vulnerability and assigned it CVE-2016-1019. An emergency patch for the vulnerability was released on April 7 [5].

Despite the fact that this new exploit could potentially work on any version of Adobe Flash, including a fully patched instance of Flash, the threat actors implemented it in a manner that only targeted older versions of Flash. In other words, equipped with a weapon that could pierce even the latest armor, they only used it against old armor, and in doing so exposed to security researchers a previously unreported vulnerability. We refer to this type of faulty implementation as a “degraded” mode, and it is something that we have observed in the past with CVE-2014-8439 [6] [7] and CVE-2015-0310 [8] in Angler. While there will be a period of time when systems are not yet patched for CVE-2016-1019 and thus vulnerable to new exploits, “degraded” implementations of potential zero-day exploits offer security researchers and vendors a valuable opportunity to identify and mitigate previously unknown vulnerabilities.

We looked back at a Nuclear Pack Flash exploit move we spotted on March 31, 2016. As we did not witness a new Flash version being exploited, we did not investigate before but the embedded exploit is the same as that discovered in Magnitude (CVE-2016-1019) according to Anton Ivanov (Kaspersky), and researchers at ESET and FireEye. 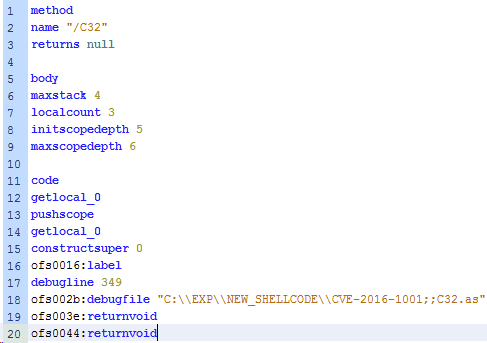 Summarizing the main findings of this analysis:

If Adobe Flash Player is required in your environment, we advise an immediate installation of the update.