Since the middle of 2018, Proofpoint has been tracking campaigns abusing legitimate messaging services, offering fake jobs, and repeatedly following up via email to ultimately deliver the More_eggs backdoor. These campaigns primarily targeted US companies in various industries including retail, entertainment, pharmacy, and others that commonly employ online payments, such as online shopping portals.

The actor sending these campaigns attempts to establish rapport with potential victims by abusing LinkedIn’s direct messaging service. In direct follow-up emails, the actor pretends to be from a staffing company with an offer of employment. In many cases, the actor supports the campaigns with fake websites that impersonate legitimate staffing companies. These websites, however, host the malicious payloads. In other cases, the actor uses a range of malicious attachments to distribute More_eggs.

We have observed a number of variations among the campaigns, but most share common characteristics. While not exhaustive, the general flow as well as specific examples of these attacks are described below.

Initially the actor uses a fraudulent, but legitimately created LinkedIn profile to initiate contact with individuals at the targeted company by sending invitations with a short message (Figure 1). This appears as a benign email with the subject “Hi [Name], please add me to your professional network”. 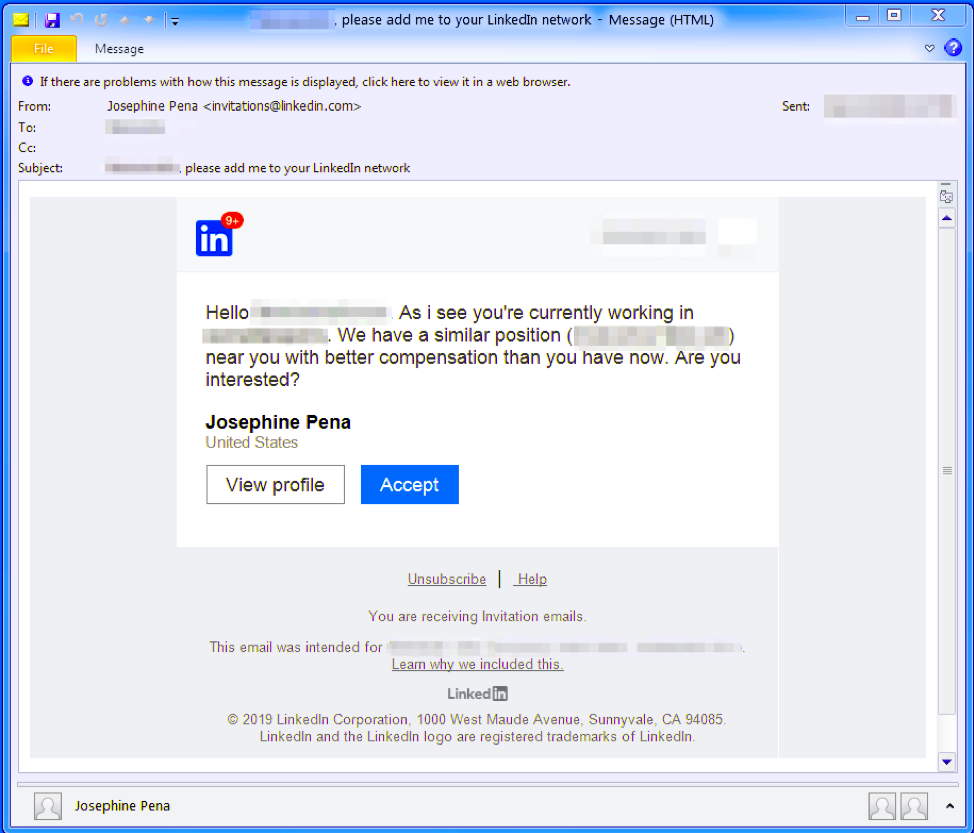 Within a week, the actor sends a direct email to the target’s work address reminding the recipient about the prior attempt to communicate on LinkedIn (Figure 2). It uses the target’s professional title, as it appears on LinkedIn, as the subject, and often suggests the recipient click on a link to see the noted job description. In other cases, this actor used an attached PDF with embedded URLs or other malicious attachments. 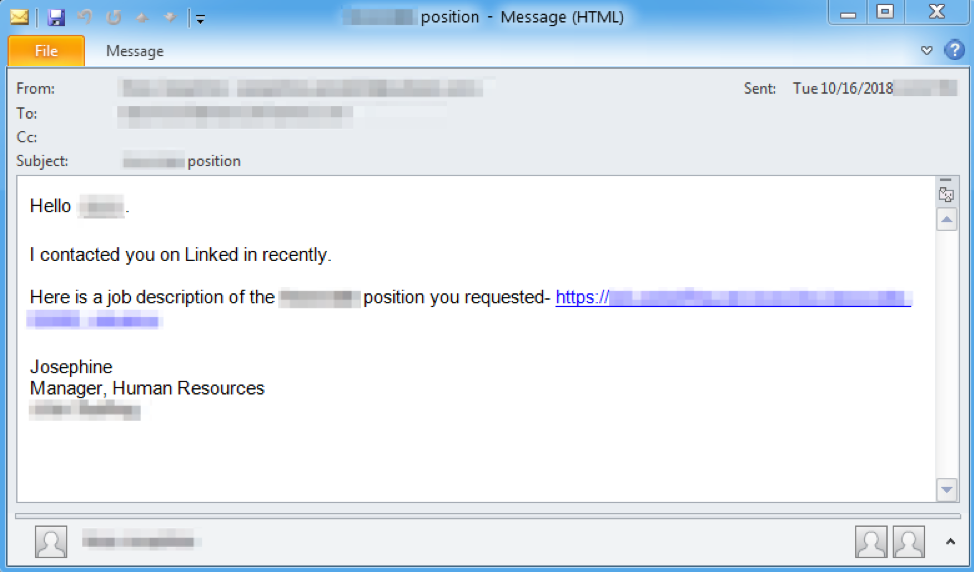 Figure 2: Example follow up email to the target’s work address, with a malicious URL.

The URLs link to a landing page that spoofs a real talent and staffing management company, using stolen branding to enhance the legitimacy of the campaigns (Figure 3). The landing page initiates a download of a Microsoft Word file (Figure 4) with malicious macros created with Taurus Builder (described below). If the recipient enables macros, the “More_eggs” payload will be downloaded and executed. In other cases, the landing page may initiate the download of a JScript loader instead, but this intermediate malware still ultimately results in the delivery of More_eggs. 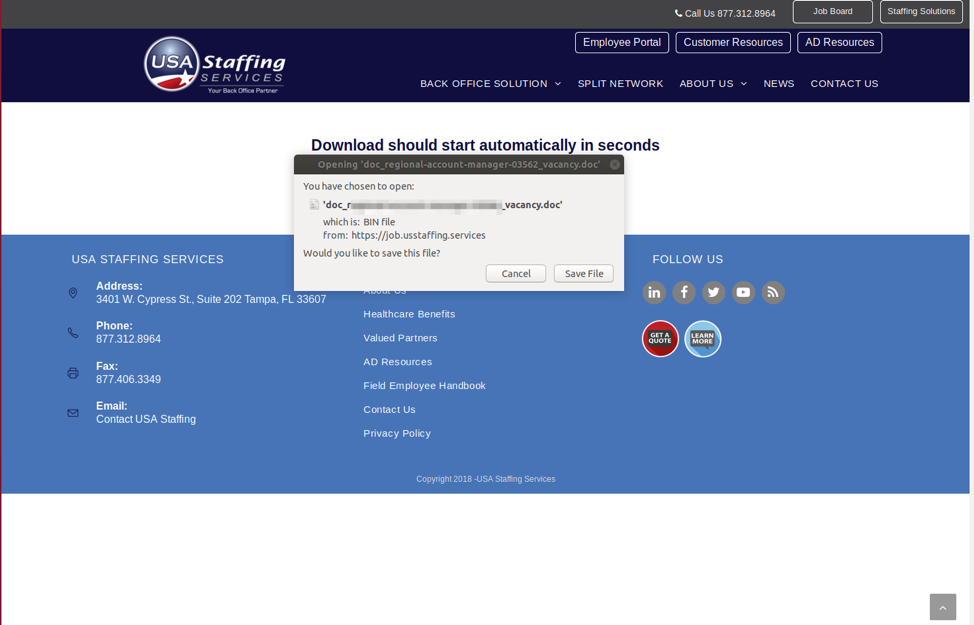 Figure 3: Example of a landing page for the URL included in email using stolen branding and a lookalike domain for a talent management agency. This one specifically initiates a download of a malicious Microsoft Word document. 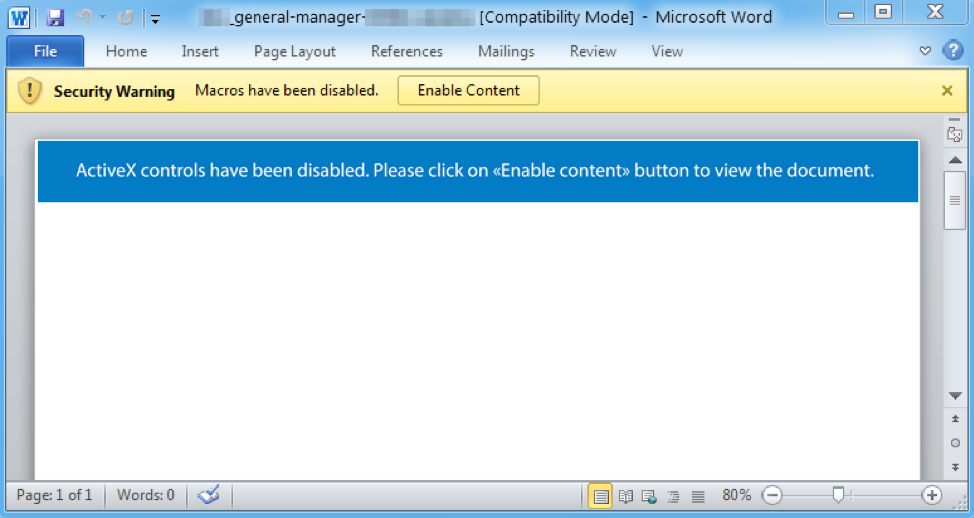 As noted, some campaigns also used malicious attachments instead of URLs in the email. Figure 5 shows an example of one such attachment, a PDF with a link to a spoofed landing page like that shown in Figure 3. 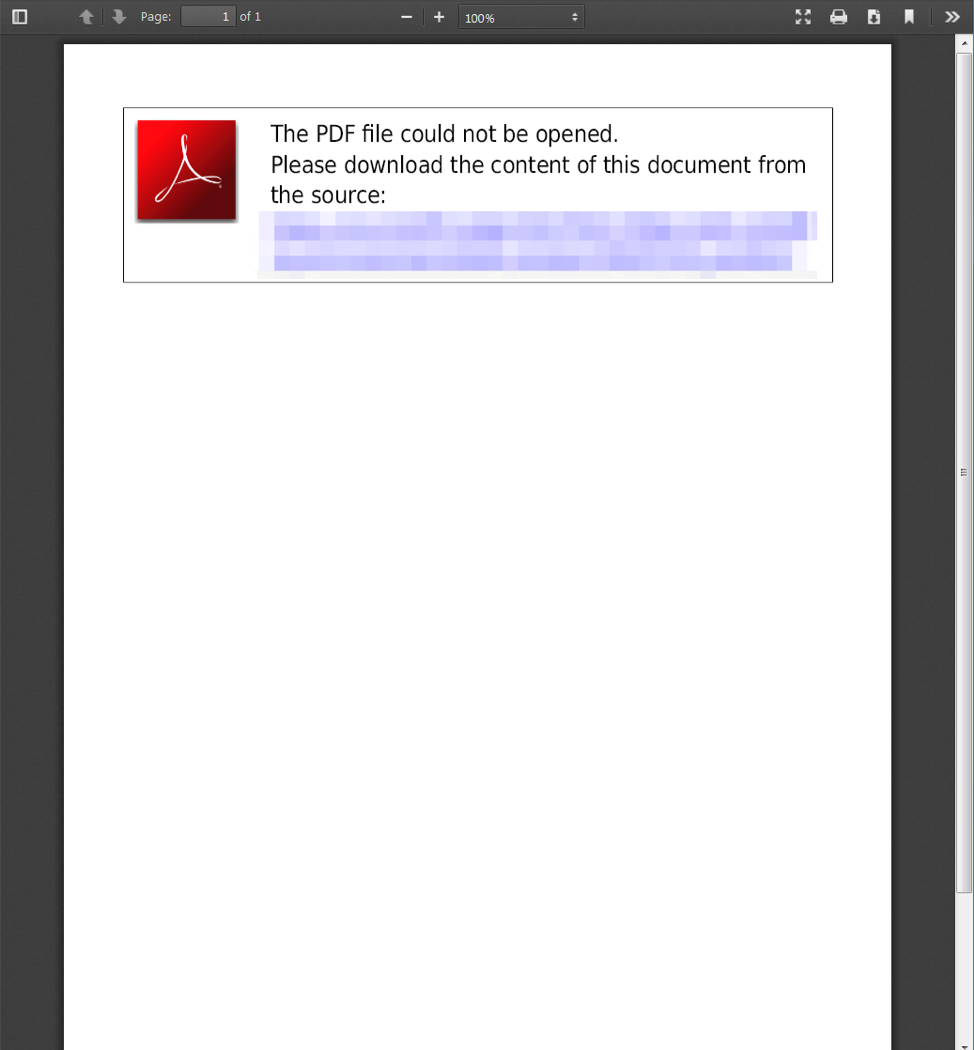 These campaigns demonstrated considerable variability, with the actor frequently changing delivery methods and more. Examples of the types of techniques used by the actor to deliver the final More_eggs payload include: 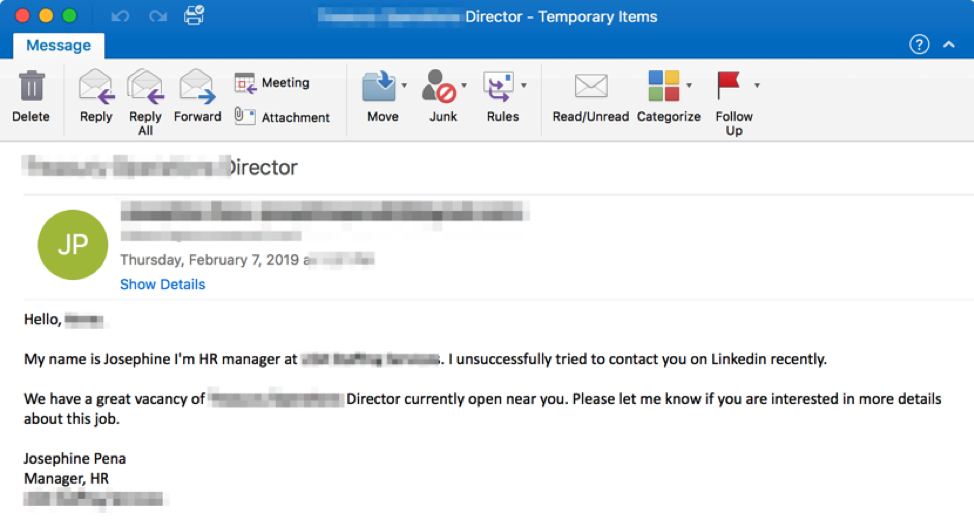 Figure 6: Example of a benign email designed to establish rapport with potential victims

This actor uses a variety of tools to distribute malware. We briefly describe three such tools below.

More_eggs is malware written in JScript used in these campaigns and others. It is often used as a downloader. In addition to its ability to download additional payloads, More_eggs has extensive capabilities to profile the infected machine. The malware was first documented by Trend Micro [5].

Brian Krebs wrote about a related campaign that targeted anti-money laundering officers at financial institutions that we believe may have been sent by the same actor. Although targeting and the final payload were different in the campaign he described, key similarities to campaigns describe above included:

Note: As we were finalizing this report we observed a larger than usual campaign from this actor on Feb 21, 2019, from random senders, with a malicious URL in the email.

As threat actors continue to turn away from very large-scale “spray and pray” campaigns and focus on persistent infections with downloaders, RATs, bankers, and other malware, increasingly sophisticated social engineering and stealthy malware are making their way into a range of campaigns. This actor provides compelling examples of these new approaches, using LinkedIn scraping, multi-vector and multistep contacts with recipients, personalized lures, and varied attack techniques to distribute the More_eggs downloader, which in turn can distribute the malware of their choice based on system profiles transmitted to the threat actor. In response to the increasing effectiveness of layered defenses and end user education efforts, we can expect more threat actors to adopt approaches that improve the effectiveness of their lures and increase the likelihood of high-quality infections.

Note: We have informed all affected parties about the abuse of their services and brands in these campaigns.