However, on October 8, Proofpoint researchers observed the Gophe spammer botnet used by these actors sending tens of thousands of unique Word documents in a single campaign. The Dyre botnet propagates itself using the Gophe spambot – among others – to propagate itself, downloading and running Gophe after the Dyre malware payload is successfully installed. The Gophe bot then sends messages to all the addresses in the victim’s Outlook or Thunderbird contact list, then deletes itself upon completion of this email run. Dyre downloads and runs the Gophe spambot again when needed, as often as several times a day.

Dyre’s Gophe spambot then crafted emails with the downloaded templates, filters, wordlists and other parameters. Appendix A includes the complete detected bot configuration, but we should highlight one of the parameters, “address_in_message” with the value “5”. This parameter instructs the bot to send an attachment to five recipients, and then move on to crafting an email with a different attachment to next five recipients. (Fig. 1) 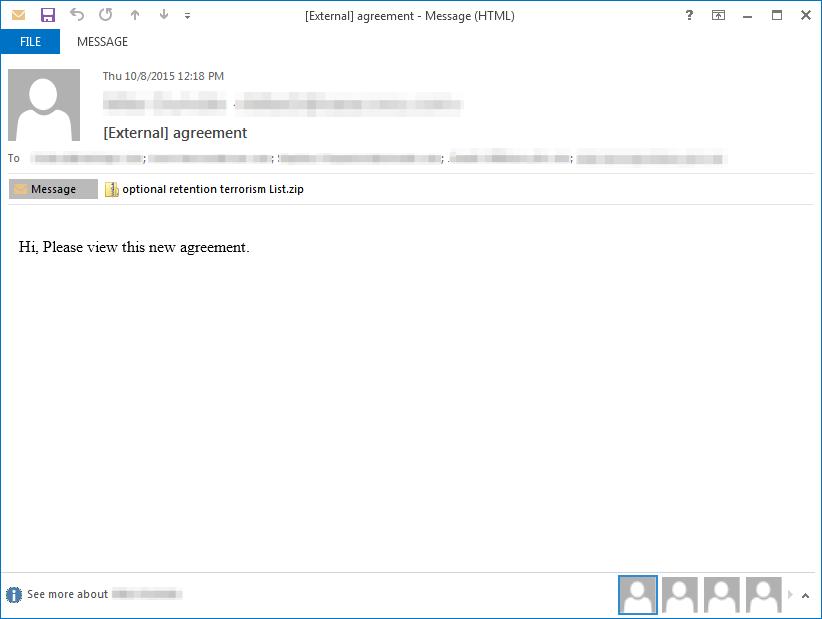 The attachment name was also randomized using an extensive wordlist. Below is a small sample of the over 60,000 words used:

The continual recombination of thousands of unique document hashes with a very wide variety of random words work together result in an email campaign that will virtually undetectable by signature--based defenses.

When the email recipient opens the attachment, they encounter a ‘secure’ Office document. The lure is almost identical to the one Proofpoint researchers recently described in “Dyre Campaigners Set Sights on the Fulfillment and Warehousing Industry” [2]. However, instead of using a macro known as Xbagging or Bartallex [3] to download the Upatre payload from the Internet, a different set of ruses and redirections is employed to drop an Upatre payload that is embedded within the document itself. 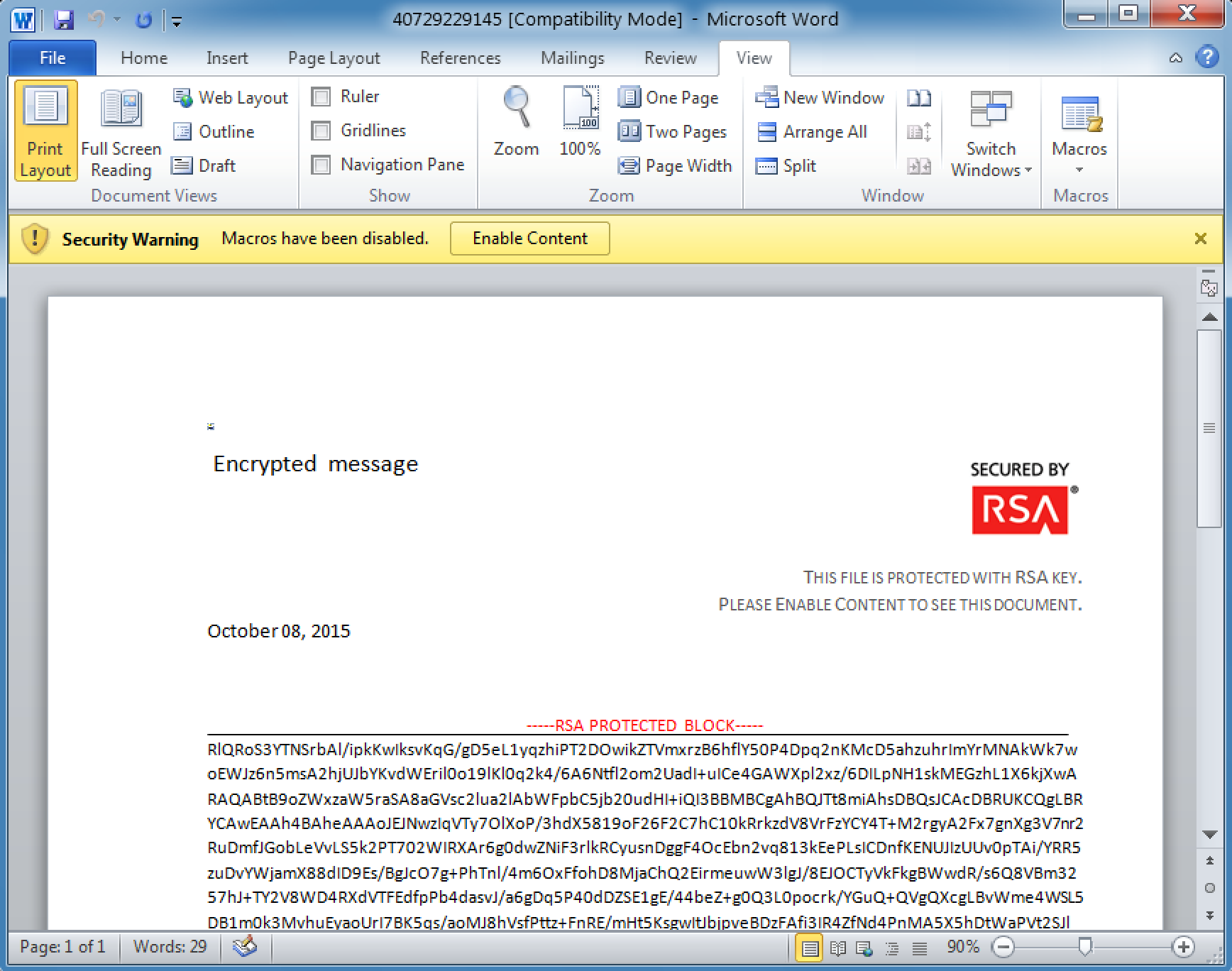 The document includes a malicious macro, which operates as follows:

This long chain of redirections is another example of the continued innovations threat actors and malware authors employ in order to evade detection by both antivirus and behavioral defense solutions.

Examining the macro details closely we can see more clearly how these steps proceed. (Analyst comments are inline after “###”.) 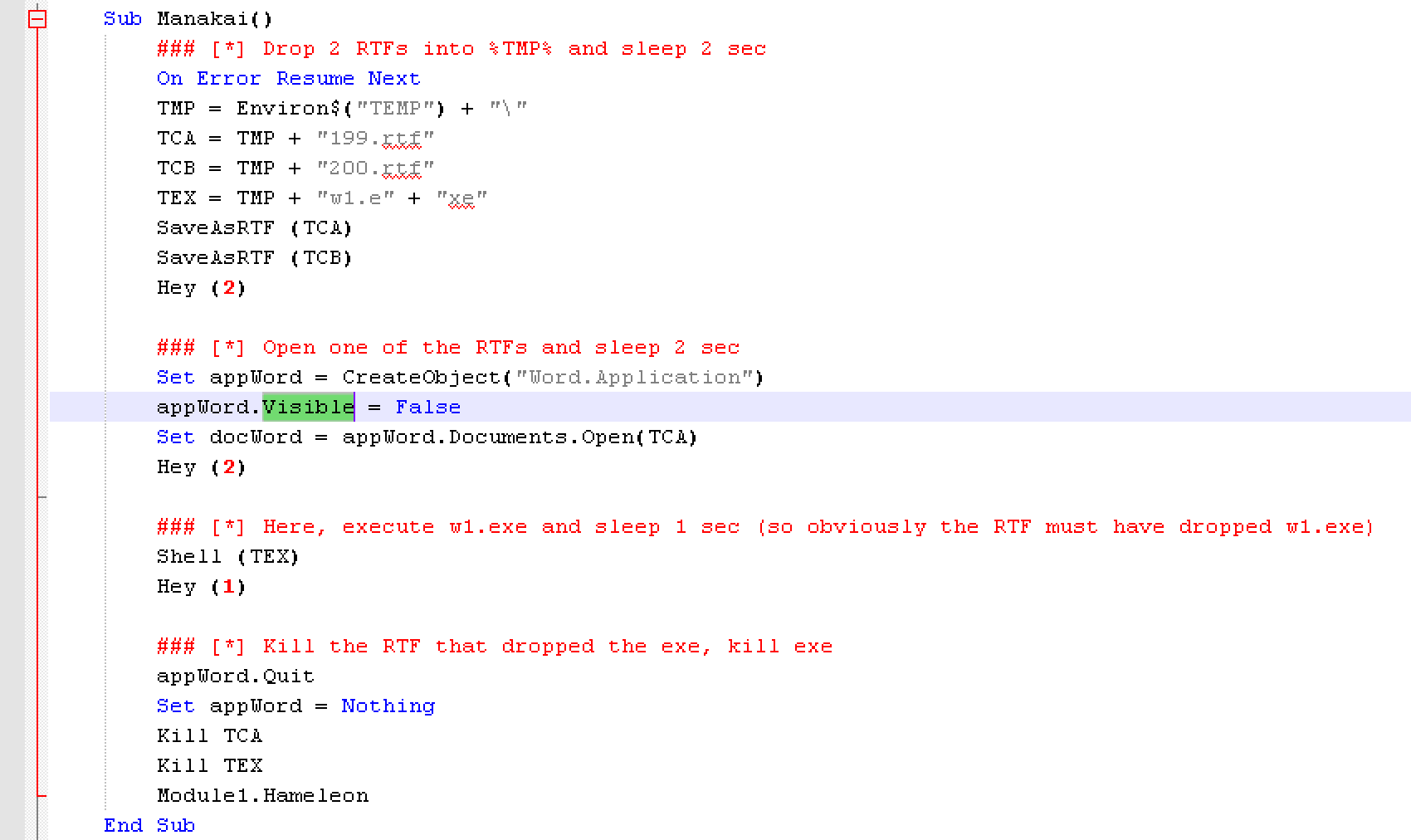 The malicious macro opens “199.rtf” (Fig. 4), which includes an embedded Upatre executable as a Packager Shell Object. (Packager Shell Objects are bundles that can be embedded in a document and double-clicked to execute directly from the document.) A small icon – easily resized – representing the object is displayed in the upper left corner of the document attachment, and when this RTF file is opened by the document macro, the embedded executable is dropped (but not executed) into %TMP% folder as “w1.exe” without any user interaction. We tested other formats such as DOC and DOCX and this behavior does not appear to be reproducible with these other formats. It should be noted that none of the Microsoft Office formats execute the Packager Shell Object binary automatically – the user needs to double click it. 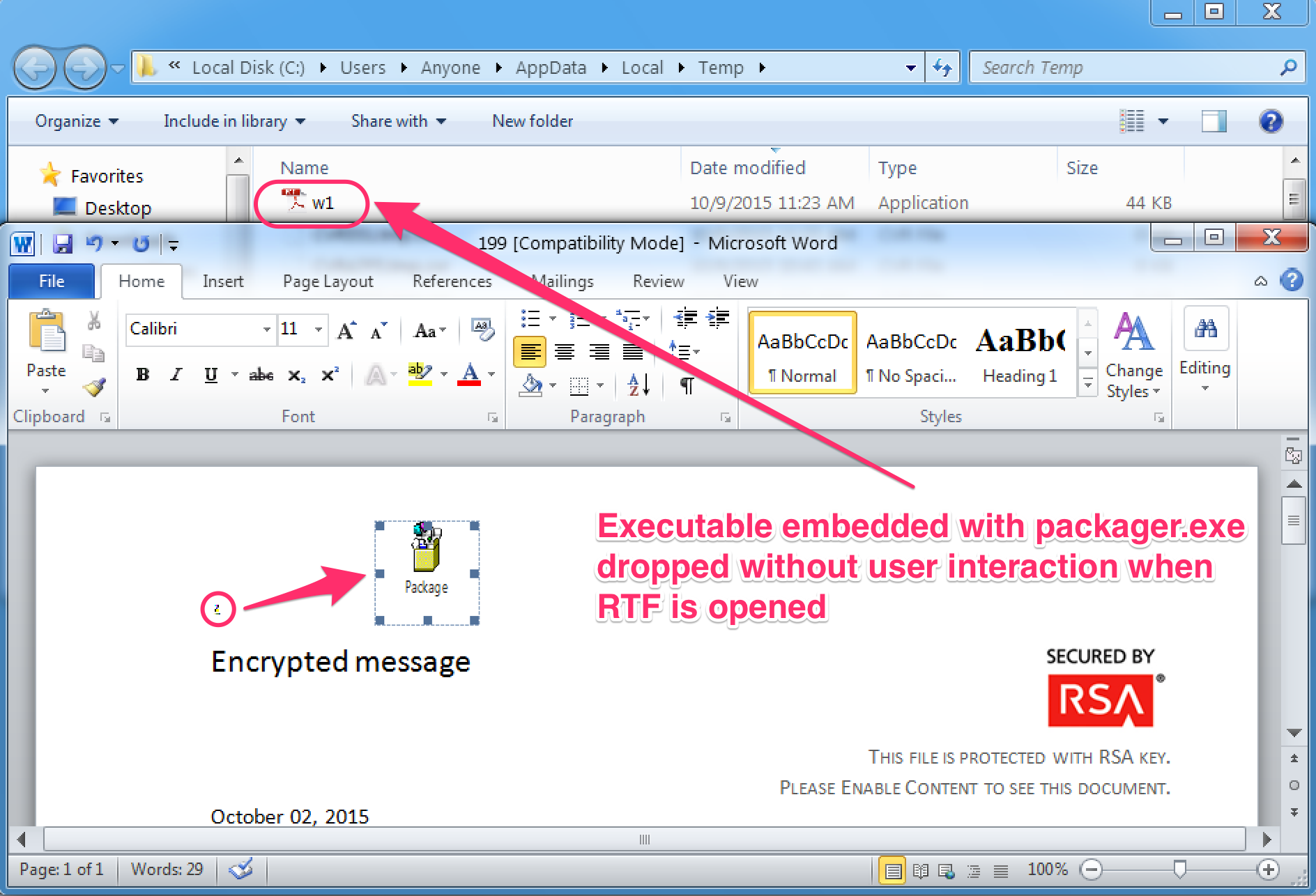 It should be noted that this macro appears to be a service or shared between groups, as it has also been observed in other malware campaigns [4].

Continuous innovation is an essential trait of modern advanced threats in order for them to stay ahead of adapting defenses. As this campaign demonstrates, techniques that have been observed previously in use by one set of actors – such as cycling attachment names, high numbers of unique attachments, and malicious macros that drop embedded malware payloads – can be adopted by threat actors to bring new life and renewed effectiveness to their campaigns. This cycle of innovation and adaptation is a key aspect of many of the cybersecurity challenges facing confronting organizations today, and shows no sign of abating.