Since 2018, Proofpoint has tracked a financially-motivated cybercrime actor, TA558, targeting hospitality, travel, and related industries located in Latin America and sometimes North America, and western Europe. The actor sends malicious emails written in Portuguese, Spanish, and sometimes English. The emails use reservation-themed lures with business-relevant themes such as hotel room bookings. The emails may contain malicious attachments or URLs aiming to distribute one of at least 15 different malware payloads, typically remote access trojans (RATs), that can enable reconnaissance, data theft, and distribution of follow-on payloads.

Proofpoint tracked this actor based on a variety of email artifacts, delivery and installation techniques, command and control (C2) infrastructure, payload domains, and other infrastructure.

In 2022, Proofpoint observed an increase in activity compared to previous years. Additionally, TA558 shifted tactics and began using URLs and container files to distribute malware, likely in response to Microsoft announcing it would begin blocking VBA macros downloaded from the internet by default.

TA558 has some overlap with activity reported by Palo Alto Networks in 2018, Cisco Talos in 2020 and 2021, Uptycs in 2020, and HP in 2022. This report is the first comprehensive, public report on TA558, detailing activity conducted over four years that is still ongoing. The information used in the creation of this report is based on email campaigns, which are manually contextualized, and analyst enriched descriptions of automatically condemned threats. 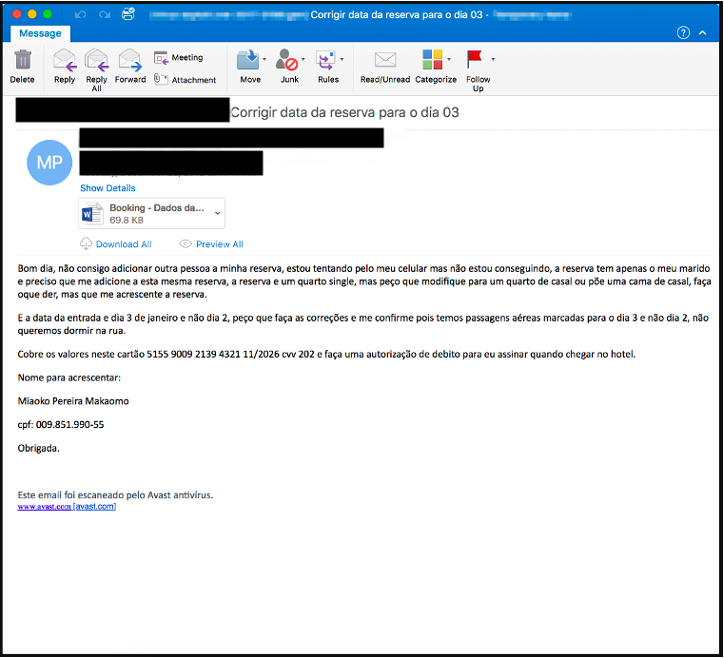 The documents leveraged remote template URLs to download an additional RTF document, which then downloaded and installed Revenge RAT. Interestingly, the term “CDT" is in the document metadata and in the URL. This term, which may refer to a travel organization, appears throughout TA558 campaigns from 2018 to present.

In 2019, this actor continued to leverage emails with Word documents that exploited Equation Editor vulnerabilities (e.g. CVE-2017-11882) to download and install malware. TA558 also began using macro-laden PowerPoint attachments and template injection with Office documents. This group expanded their malware arsenal to include Loda, vjw0rm, Revenge RAT, and others. In 2019, the group began occasionally expanding targeting outside of the hospitality and tourism verticals to include business services and manufacturing. Example campaign: 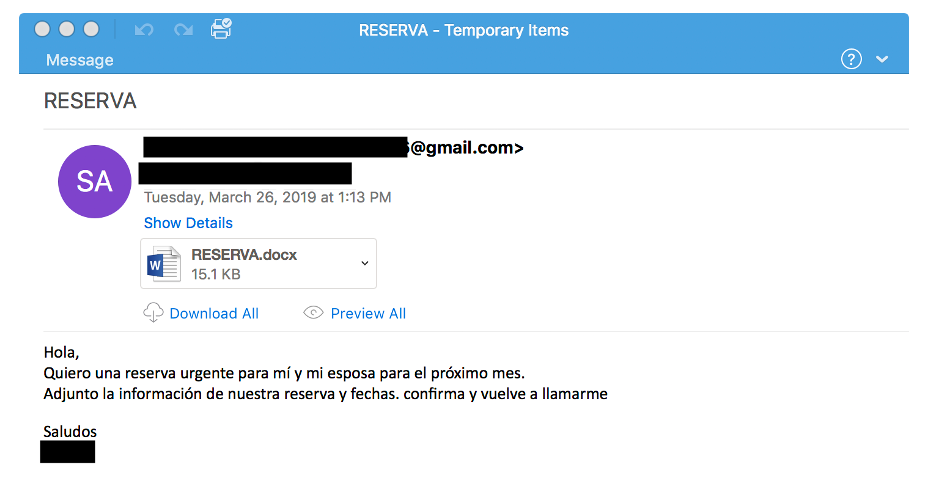 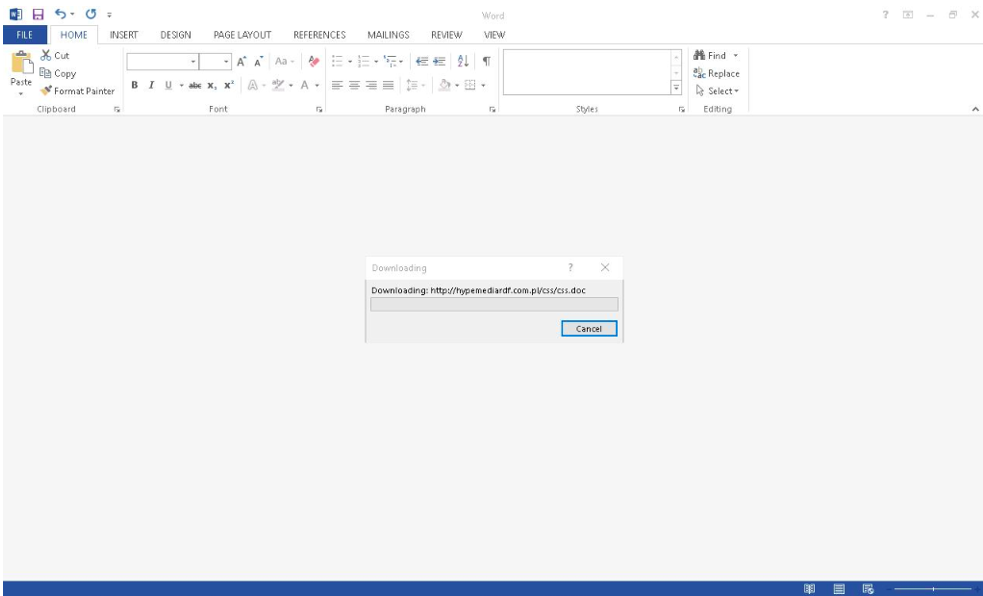 In 2020, TA558 stopped using Equation Editor exploits and began distributing malicious Office documents with macros, typically VBA macros, to download and install malware. This group continued to use a variety of malware payloads including the addition of njRAT and Ozone RAT.

Hotel, hospitality, and travel organization targeting continued. Although the actor slightly increased its English-language operational tempo throughout 2020, most of the lures featured Portuguese and Spanish reservation requests. An example of a common attack chain in 2020: 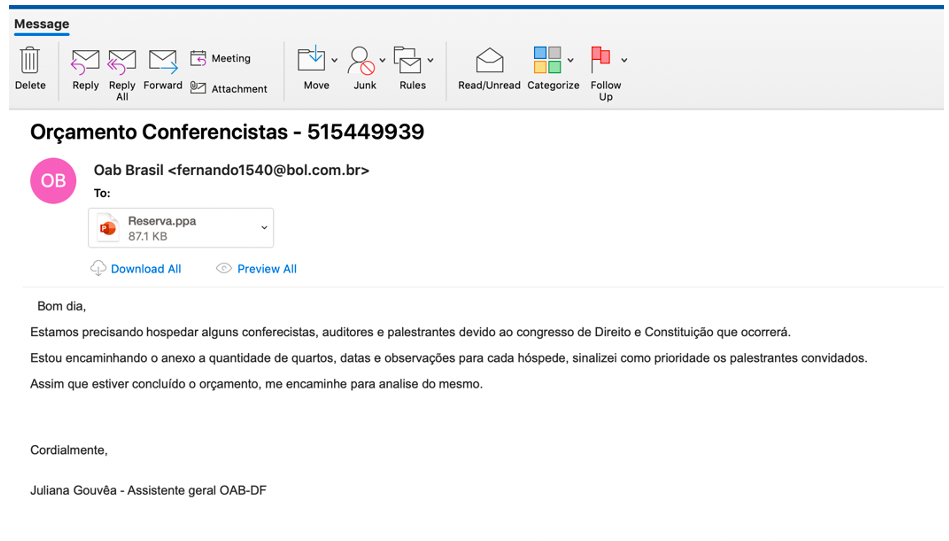 The message contained a PowerPoint attachment that used template injection techniques and VBA macros which, if enabled, executed a PowerShell script to download a VBS payload from an actor-controlled domain. The VBS script in turn downloaded and executed Revenge RAT. 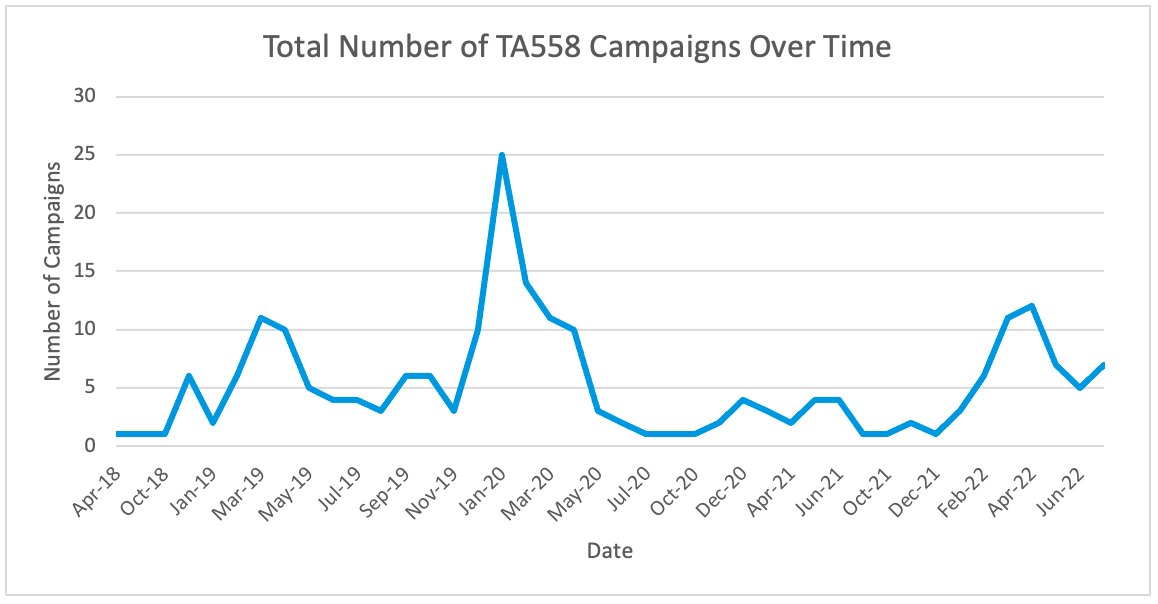 Additionally, this group started to include more elaborate attack chains in 2021. For example, introducing more helper scripts and delivery mechanisms such as embedded Office documents within MSG files.

In this example 2021 campaign, emails purported to be, e.g.:

Emails masqueraded as Unimed, a Brazilian medical work cooperative and health insurance operator. These messages contained Microsoft Word attachments with macros which, if enabled, invoked a series of scripts to ultimately download and execute AsyncRAT. 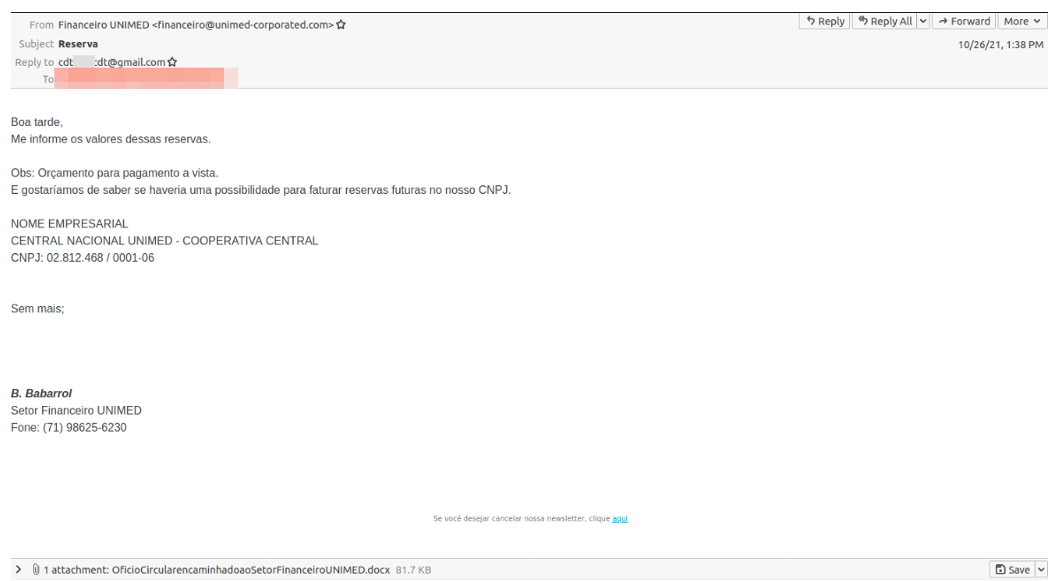 Of note is the repeat use of the string “CDT” contained the replyto email address and C2 domain names.

Persistence was achieved through a scheduled task masquerading as a Spotify service.

This was the actor’s least active year. Proofpoint observed just 18 campaigns conducted by TA558 in 2021.

In 2022, campaign tempo increased significantly. Campaigns delivered a mixture of malware such as, Loda, Revenge RAT, and AsyncRAT. This actor used a variety of delivery mechanisms including URLs, RAR attachments, ISO attachments, and Office documents.

TA558 followed the trend of many threat actors in 2022 and began using container files such as RAR and ISO attachments instead of macro-enabled Office documents. This is likely due to Microsoft’s announcements in late 2021 and early 2022 about disabling macros by default in Office products, which caused a shift across the threat landscape of actors adopting new filetypes to deliver payloads. 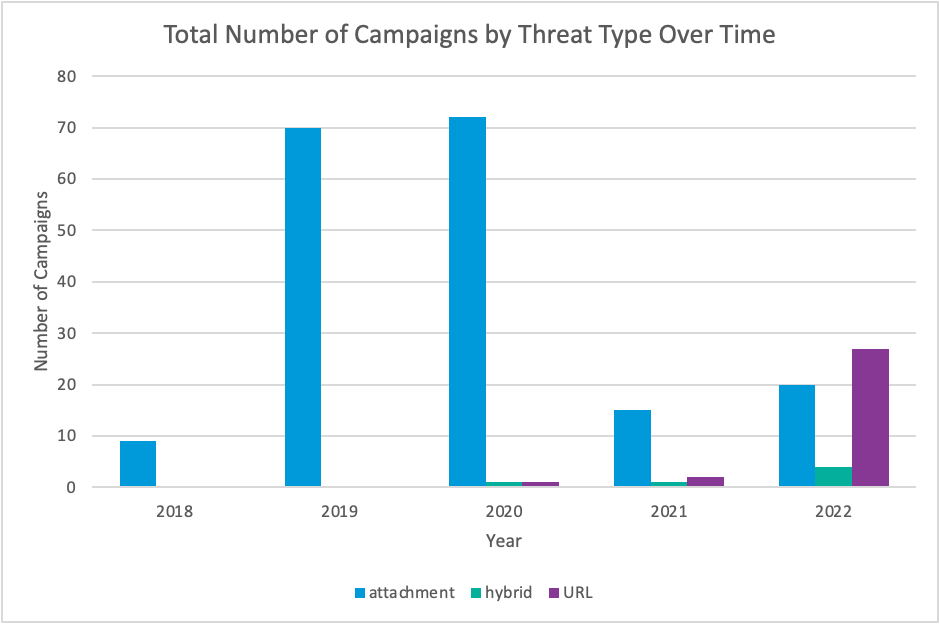 The URL purported to be a legitimate 155 Hotel reservation link that led to an ISO file and an embedded batch file. The execution of the BAT file led to a PowerShell helper script that downloaded a follow-on payload, AsyncRAT.

Similar to earlier campaigns, persistence was achieved via a scheduled task:

In April 2022 Proofpoint researchers spotted a divergence from the typical email lure. One of the campaigns included a QuickBooks invoice email lure. Additionally, this campaign included the distribution of RevengeRAT which had not been observed in use by TA558 since December 2020. Messages purported to be:

The emails contained Excel attachments with macros that downloaded helper scripts via PowerShell and MSHTA. The execution of helper scripts ultimately led to the installation of RevengeRAT. Proofpoint has not seen this theme since April, and it is unclear why TA558 temporarily pivoted away from reservations themes.

Since 2018, TA558 has used at least 15 different malware families, sometimes with overlapping command and control (C2) domains. The most frequently observed payloads include Loda, Vjw0rm, AsyncRAT, and Revenge RAT. 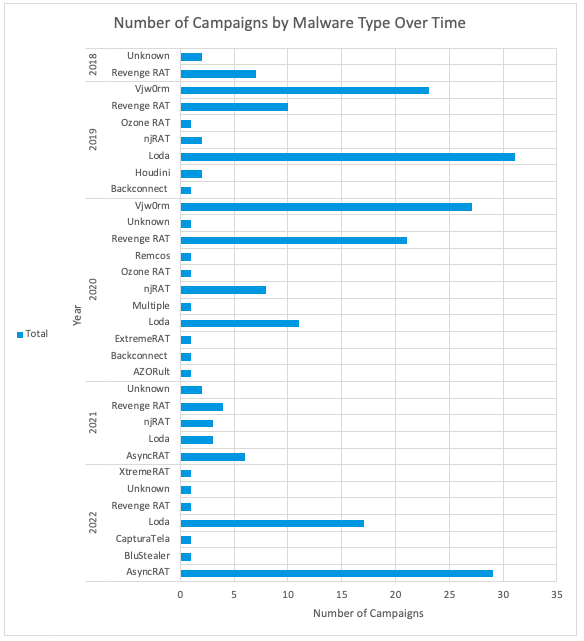 Figure 10: Number of TA558 campaigns by malware type over time

Since Proofpoint began tracking TA558 through 2022, over 90% of campaigns were conducted in Portuguese or Spanish, with four percent featuring multiple language lure samples in English, Spanish, or Portuguese. 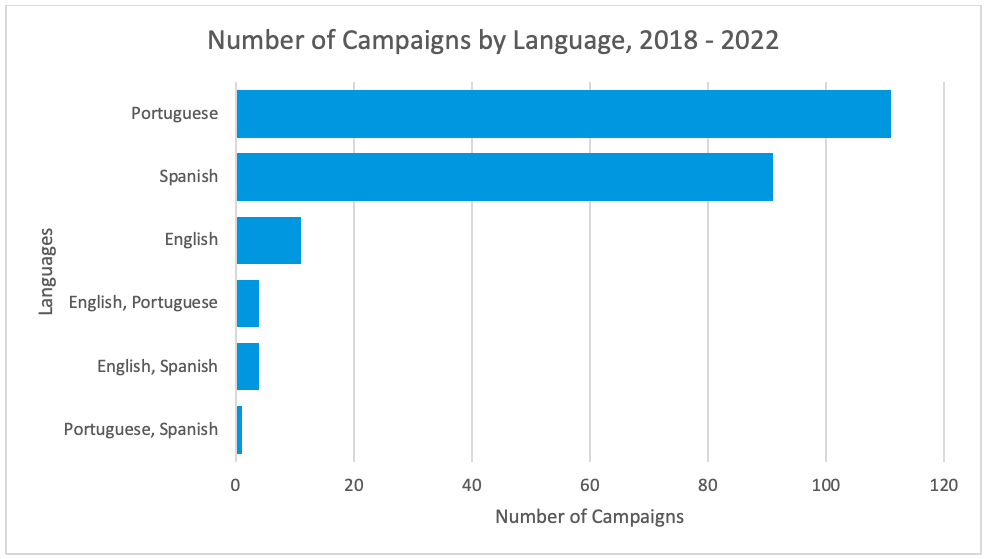 Figure 11: Campaign totals by language since 2018

Interestingly, the threat actor often switches languages in the same week. Proofpoint researchers have observed this actor send, for example, a campaign in English and the following day another campaign in Portuguese. Individual targeting typically differs based on campaign language.

Throughout many of the 2019 and 2020 campaigns the threat actor used various URLs from the domain sslblindado[.]com to download either helper scripts or malware payloads. Some examples include:

Like other threat actors, this group sometimes mimics technology service names to appear legitimate. For example, using terms in payload URLs or C2 domain names. Some examples include:

Another interesting pattern observed were common strings like “success” and “pitbull”. In several campaigns Proofpoint researchers spotted these strings in C2 domains. Some examples include:

From 2019 through 2020, TA558 conducted 10 campaigns used the keyword “Maringa” or “Maaringa” in payload URLs or email senders. Maringa is a city in Brazil. Examples include:

Proofpoint has not observed post-compromise activity from TA558. Based on the observed payloads, victimology, and campaign and message volume, Proofpoint assesses with medium to high confidence that this is a financially motivated cybercriminal actor.

Open-source reporting provides insight into one possible threat actor objective. In July, CNN Portugal reported a Portuguese hotel’s website was compromised, and the actor was able to modify the website and direct customers to a fake reservation page. The actor stole funds from potential customers by posing as the compromised hotel. Although Proofpoint does not associate the identified activity with TA558, it provides an example of possible follow-on activity and the impacts to both target organizations and their customers if an actor is able to compromise hotel or transportation entities.

TA558 is an active threat actor targeting hospitality, travel, and related industries since 2018. Activity conducted by this actor could lead to data theft of both corporate and customer data, as well as potential financial losses.

Organizations, especially those operating in targeted sectors in Latin America, North America, and Western Europe should be aware of this actor’s tactics, techniques, and procedures.

The following IOCs represent a sample of indicators observed by Proofpoint researchers associated with TA558.