Would’ve, Could’ve, Should’ve…Did: TA453 Refuses to be Bound by Expectations

Since at least late 2020, Proofpoint researchers have observed aberrations in TA453 (which overlaps with groups publicly known as Charming Kitten, PHOSPHORUS, and APT42) phishing activity in which the threat actor has stepped away from its typical phishing techniques and target victimology. A hallmark of TA453’s email campaigns is that they almost always target academics, researchers, diplomats, dissidents, journalists, human rights workers, and use web beacons in the message bodies before eventually attempting to harvest a target’s credentials. Such campaigns may kick off with weeks of benign conversations from actor-created accounts before attempted exploitation.

Proofpoint tracks approximately six subgroups of TA453—more details of which are shared in the Attribution section of this report—differentiated primarily by victimology, techniques, and infrastructure. Regardless of the subgroup, TA453 typically targets academics, policymakers, diplomats, journalists, human rights workers, dissidents, and researchers with expertise in the Middle East. Email accounts registered by TA453 generally match thematically with their targets and the threat actor favors including web beacons in its email campaigns. TA453 heavily relies on benign conversations to initiate contact with targets—of which Proofpoint has observed over 60 such campaigns in 2022. TA453 almost always delivers credential harvesting links with the intent of gaining access to a target’s inbox for exfiltration of email content. Some subgroups will converse for weeks before delivering the malicious links, while others will immediately send the malicious link in the first email.

TA453 Branches Out with its Techniques and Targeting

Beginning in late 2020, Proofpoint researchers started to observe campaigns that deviated from TA453’s expected phishing activity. These deviations have received little, if any, public attention, causing Proofpoint to decide to share our insights in this report. The campaigns notably leveraged techniques not previously associated with TA453’s email activity, such as:

The following is a comprehensive chart of Proofpoint-observed outlier activity followed by deeper dives into campaigns that exemplify TA453’s irregular activity.

Highlights of Proofpoint-Observed Abnormal TA453 Targeting Between 2020 and 2022

Samantha? I don’t even know a Samantha…Do I?

Proofpoint researchers first identified the Samantha Wolf persona when the associated email, samantha.wolf0077[@]gmail.com, was included in the lure content of a malicious document (SHA256: a8c062846411d3fb8ceb0b2fe34389c4910a4887cd39552d30e6a03a02f4cc78). This document, which was uploaded to VirusTotal, used remote template injection to download multiple .dotm files from office-updates[.]info and is attributed to TA453. The attack chain for this cluster of activity typically resulted in a PowerShell backdoor Proofpoint calls GhostEcho (publicly tracked as CharmPower). As detailed by PwC, the downloaded template establishes persistence by replacing the user’s previous default Microsoft Word template. 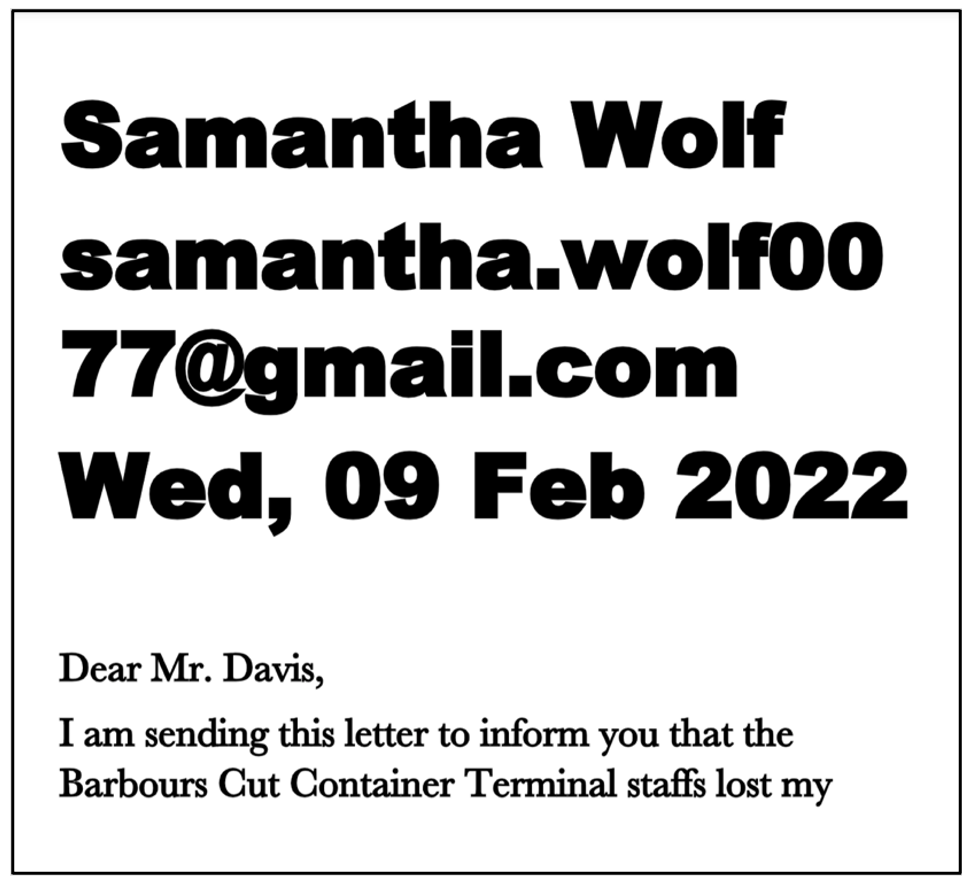 Figure 2. The Samantha persona reaches out to a US-based academic claiming a car accident.

In late 2022, Samantha encountered even more people with whom she has taken umbrage, sending additional complaint-themed benign conversation emails to senior US and European government officials. Samantha’s confrontational lures demonstrate an interesting attempt to generate engagement with targets not seen from other TA453 accounts.

Not So Charming: A Look at TA453’s Aggressive Side

While most of TA453’s operations have appeared to focus on collecting intelligence, a subset of late 2021 and mid-2022 activity showed a more aggressive side to TA453 that indicates possible support to the IRGC’s kinetic operations.

In May 2022, Israeli media reported Israeli intelligence agency Shin Bet identified Iranian intelligence services’ phishing activity designed to lure targets in order to kidnap them. Based on the indicators provided, Proofpoint correlated this activity with TA453 campaigns from December 2021 in which campaigns attributed to TA453 used a spoofed email address of a reputable academic from the domain (css-ethz[.]ch) to give a researcher an “Invitation to Zurich Strategic Dialogue Jan-2022."

In early May 2022, Proofpoint identified a disturbing TA453 attributed campaign targeting a single individual. In this campaign, TA453 utilized multiple compromised email accounts, including those of a high-ranking military official, to deliver a link to the target—a former member of the Israeli military. The use of multiple compromised email accounts to target a single target is unusual for TA453. While each of the URLs observed were unique to each compromised email account, each linked to the domain gettogether[.]quest and pointed to the same threatening message in Hebrew. The message displayed on the web page (Figure 3 below) was an image with the target’s first name in the file name.

Machine translation of the Hebrew text in the image:

I'm sure you remember what I told you

Take care of yourself

After Proofpoint blocked the initial email attempts, TA453 included a commercial web beacon from mailtrack[.]io likely to verify the delivery of its threatening emails.

It is this method of using multiple compromised accounts belonging to established connections of the target to send a message of intimidation rather than a phishing link that indicates a possible collaboration between TA453 and hostile Iranian state-aligned operations. This assessment is further supported by the content of the email itself and overlapping infrastructure. The gettogether[.]quest domain has resolved to 66.29.153[.]90 since mid-April 2022. Co-located on that infrastructure since December 2021 is css-ethz[.]ch, the domain similar to the one spoofing The Center for Security Studies (CSS) at ETH Zurich in support of kidnapping operations discussed previously.

Additionally, Proofpoint in mid-2022 identified that a close affiliate of a former US official targeted in the IRGC murder-for-hire plot was targeted and successfully compromised by the Korg malware, a family exclusive to TA453. TA453 previously targeted this same individual with phishing links in April 2021 and July 2021. This further corroborates Proofpoint’s assessment that a subcluster of TA453 supports kinetic IRGC operations.

Proofpoint continues to assess that TA453 generally operates in support of the IRGC, specifically the IRGC Intelligence Organization (IRGC-IO). This assessment is based on a variety of evidence, including overlaps in unit numbering between Charming Kitten reports and IRGC units as identified by PWC, the US Department of Justice indictment of Monica Witt, and IRGC-affiliated actors, and analysis of TA453 targeting compared to reported IRGC-IO priorities. Proofpoint judges with moderate confidence that the more aggressive activity could represent collaboration with another branch of the Iranian state, including the IRGC Quds Force.

Clustering cyber espionage activity is often difficult when looking from different telemetry. Proofpoint currently views TA453 as overlapping with PHOSPHORUS and roughly equivalent to APT42 and Yellow Garuda, all of which can be considered Charming Kitten. 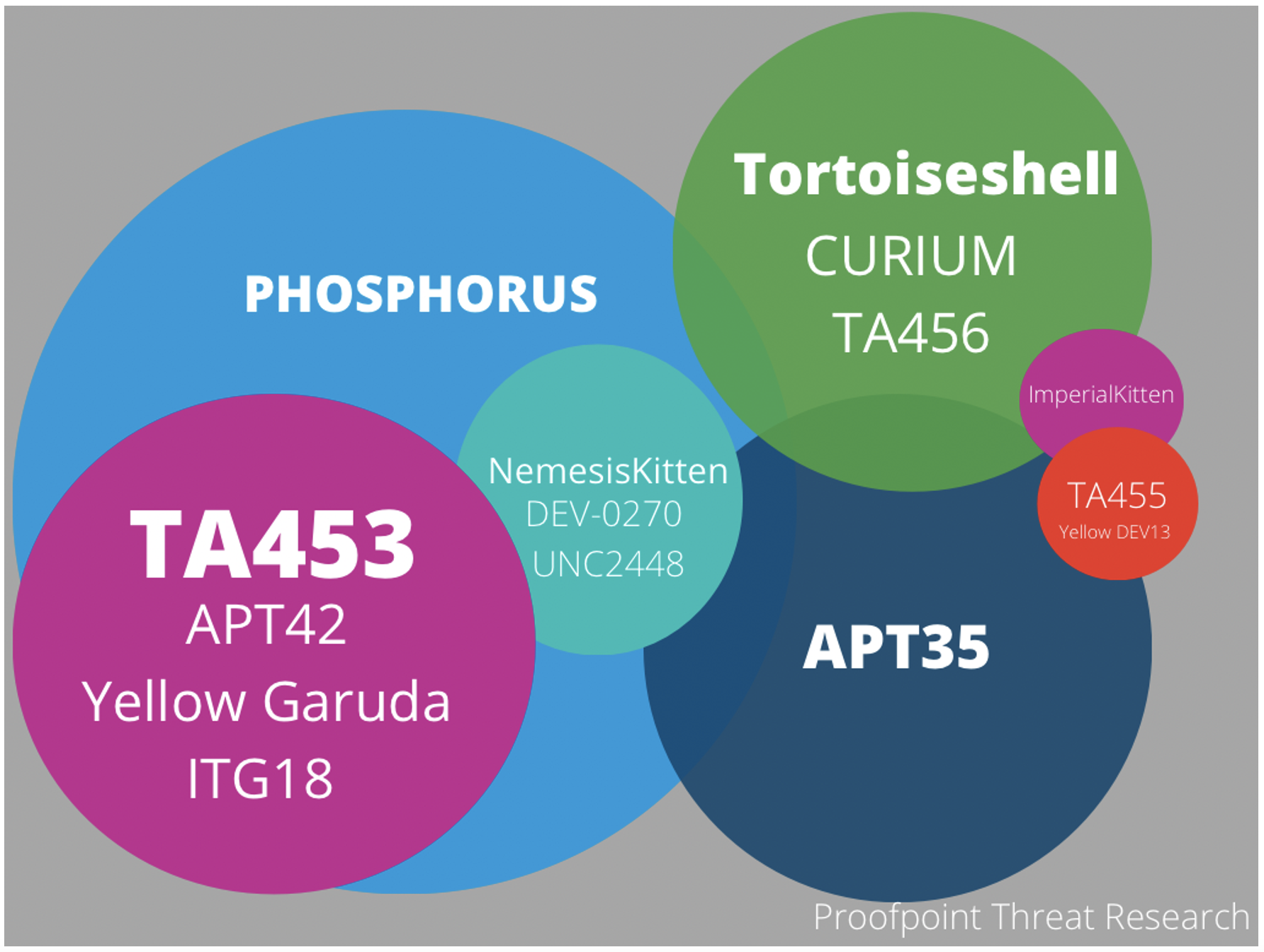 TA453, like its fellow advanced persistent threat actors engaged in espionage, is in a constant state of flux regarding its tools, tactics, techniques, and targeting. Adjusting its approaches likely in response to ever changing and expanding priorities, the Proofpoint-observed outlier campaigns are likely to continue and reflect IRGC intelligence collection requirements, including possible support for hostile, and even kinetic, operations.