Buer, a new loader emerges in the underground marketplace

For several years, Proofpoint researchers have been tracking the use of first-stage downloaders, which are used by threat actors to install other forms of malware during and after their malicious email campaigns. In particular, over the last two years, these downloaders have become increasingly robust, providing advanced profiling and targeting capabilities.

More importantly, downloaders and other malware like botnets and banking Trojans have displaced ransomware as primary payloads, giving threat actors the flexibility to deploy a range of malware in secondary infections. For example, one of the most prevalent, Smoke Loader, has been used extensively to drop payloads such as Ursnif and The Trick banking Trojans, as well as using its own modules for credential and other information and data-stealing, among other malicious functions.

Since late August 2019, Proofpoint researchers have been tracking the development and sale of a new modular loader named Buer by its authors. Buer has features that are highly competitive with Smoke Loader, is being actively sold in prominent underground marketplaces, and is intended for use actors seeking a turn-key, off-the-shelf solution.

On August 28, Proofpoint researchers observed malicious email messages that appear to reply to earlier legitimate email conversations. They contained Microsoft Word attachments that use Microsoft Office macros to download the next stage payload. 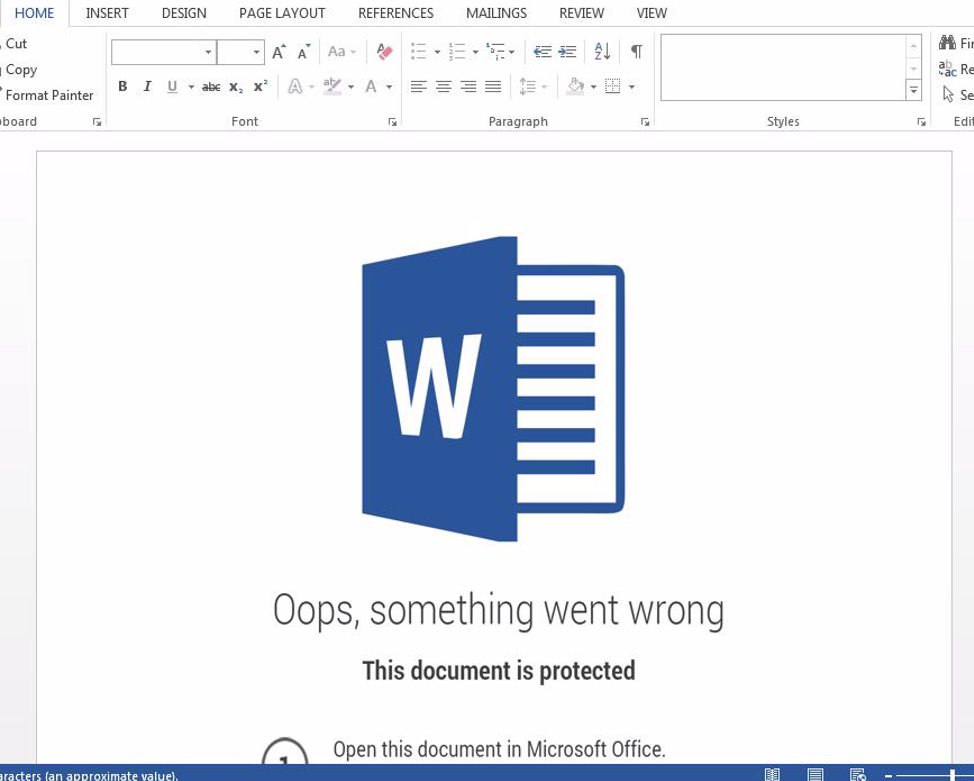 We observed the next-stage payload being downloaded from URLs including:

The dropped payload was named verinstere222.xls or verinstere33.exe (a naming convention that the actor used during that period). Instead of the Dreambot variant of Ursnif frequently associated with this actor, the payload was an undocumented loader not previously observed in the wild.

In the following weeks over September and October, Proofpoint researchers and other members of the infosec community [1] observed several campaigns from the same actor dropping either the Dreambot variant of Ursnif or this new loader.

Since the beginning of July, Proofpoint researchers observed approximately 100 campaigns involving Ostap [2] almost exclusively loading several instances of The Trick. On the 21, however, Proofpoint researchers observed malicious email messages with subject lines such as “Penalty Notice # PKJWVBP” containing Microsoft Word attachments. The documents contained macros that, if enabled, would execute Ostap. We observed Ostap downloading this loader from

which in turn loaded The Trick “ono22” from its C&C: garrisontx[.]us

Figure 3: Network traffic observed once the macro in the malicious documents is enabled. 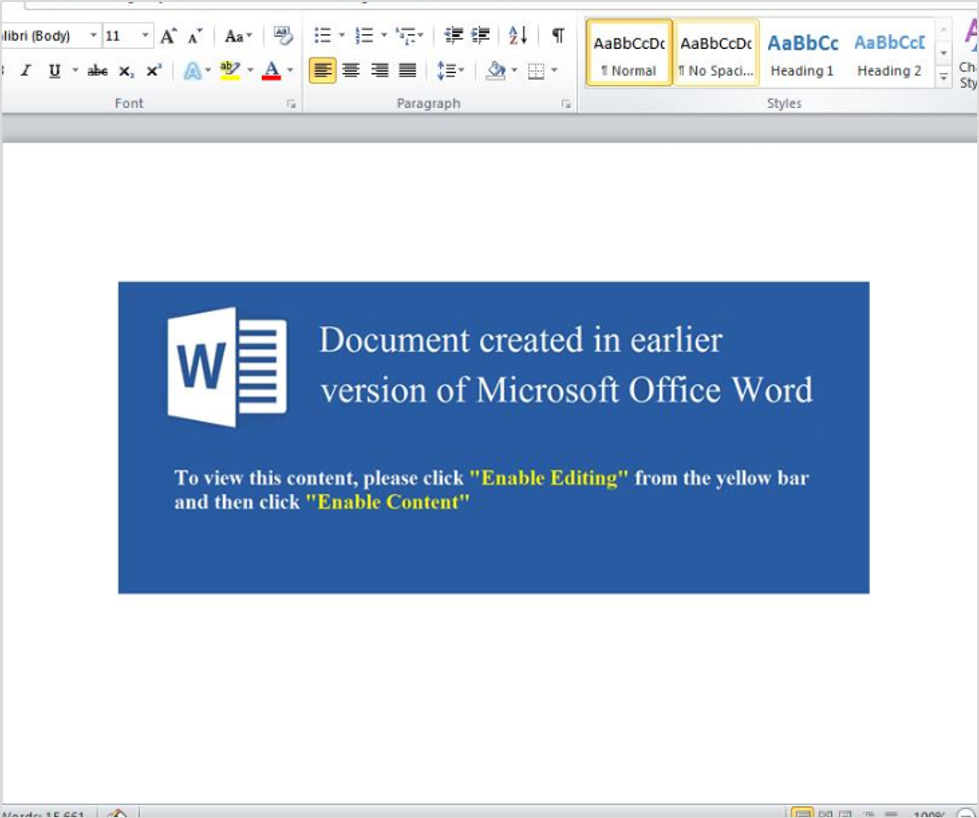 Because we began observing this new loader in use in multiple, distinct campaigns, we expected that it was being sold in an underground marketplace to multiple actors. Moreover, we discovered an advertisement from August 16 on an underground forum describing a loader named “Buer” that matched the functionality of the malware observed in the above campaigns.

The features added and advertised in the following weeks match exactly with the evolution of the loader found in these campaigns.

We retrieved text from a bulletin board posting by the author, in Russian, requesting a payment of $400 for the malware, and offering their services to set up the software for prospective customers in order to get it up and running. The author also notes that updates and bug fixes are free of charge, but there is a $25 surcharge for “rebuilding to new addresses.”

The following text, which Proofpoint also extracted from the underground marketplace, and is presumed to be written by the author of the malware, is a summary of the functionality of the loader as described in the original Russian: 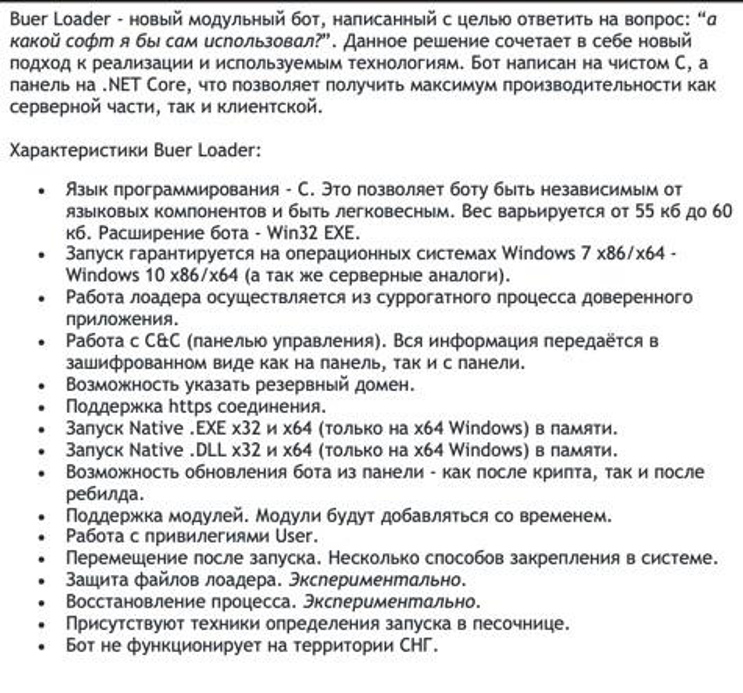 Similarly, the advertisement also lists control panel functionality. The author notes that the modular bot is written entirely in C, using a control panel written in .NET Core, emphasizing higher performance in both the client and server due to the choice of programming language.

The ad describes the following features for the server and control panel:

The forum post also included technical release notes for the Buer loader and control panel (version 1.1.2). In the introduction, the author noted that launching the loader now consists of three steps -- if the first two steps are unsuccessful on the infected system, and the injection into the surrogate process fails (for example, due to incompatibility with the crypt itself), the loader will execute under its own process instead.

The release notes call out the following for the loader:

The release notes call out the following features for the control panel:

Finally, the author described the following technical changes for version 1.1.9. These are noteworthy as they demonstrate that the malware is under active, professional development.

The following control panel screenshots were included in the underground advertisement, showing some of the back end capabilities available to customers, including telemetry monitoring, host filtering, and more. 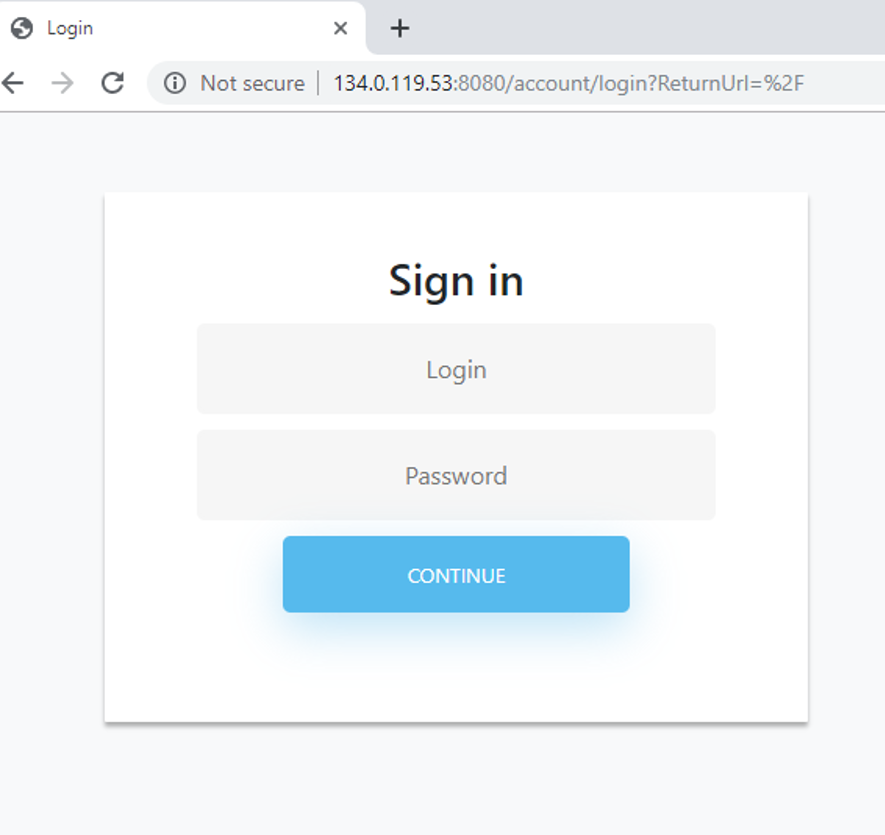 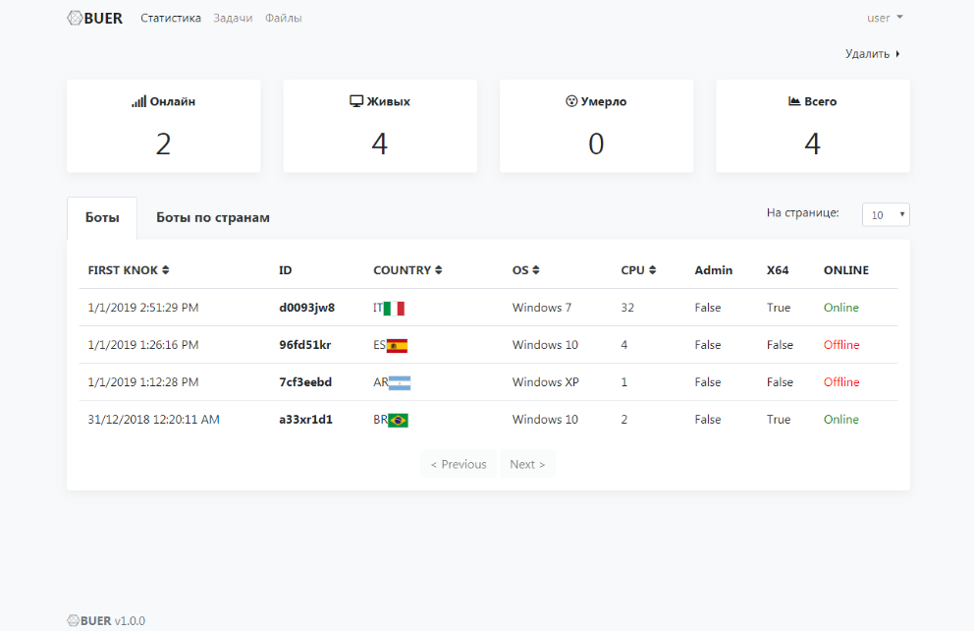 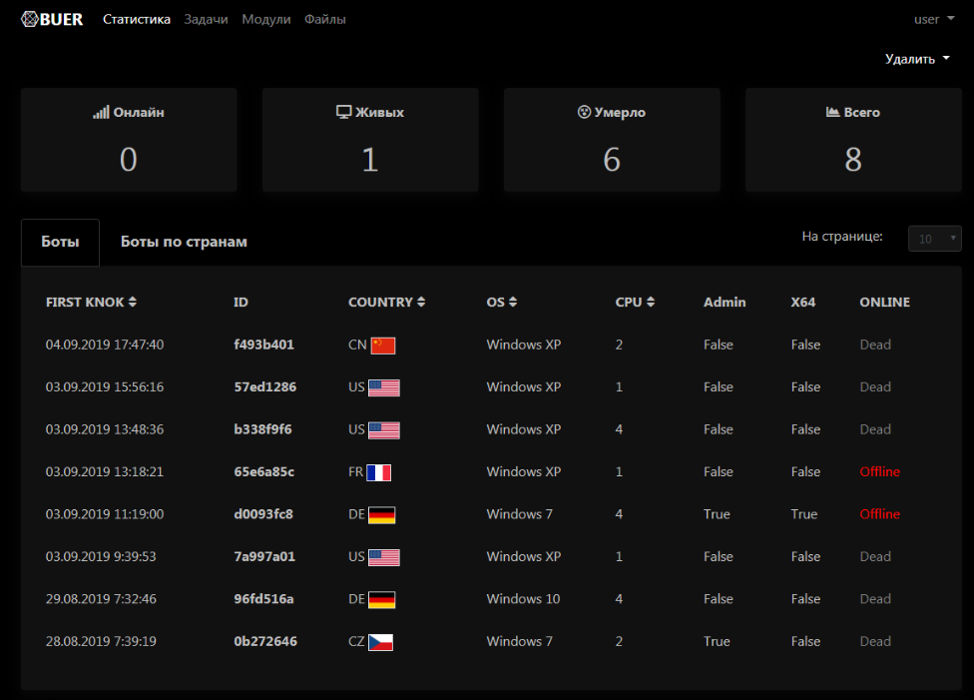 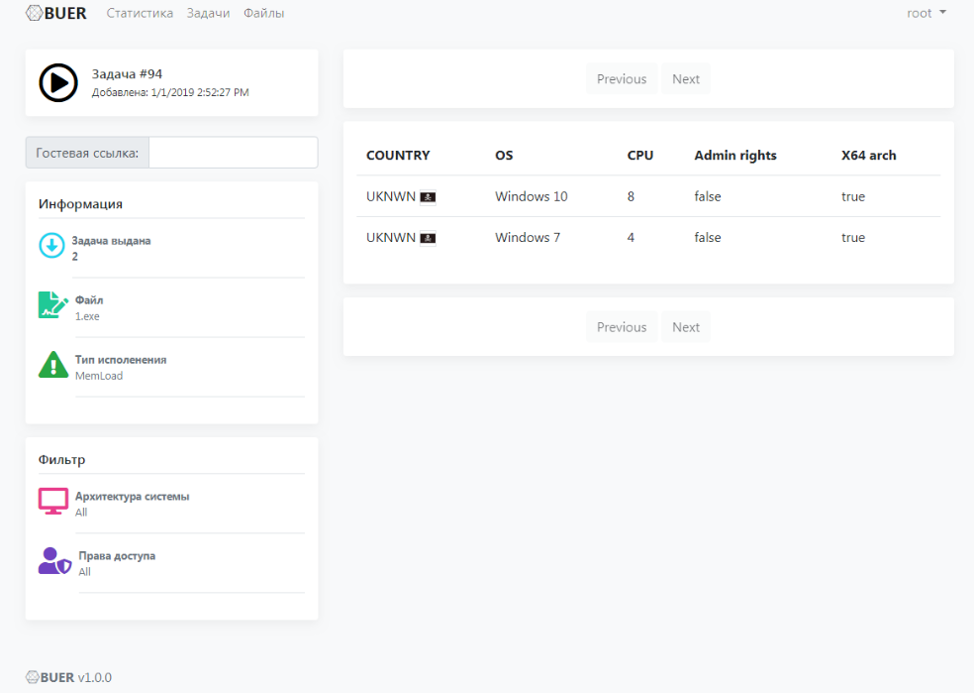 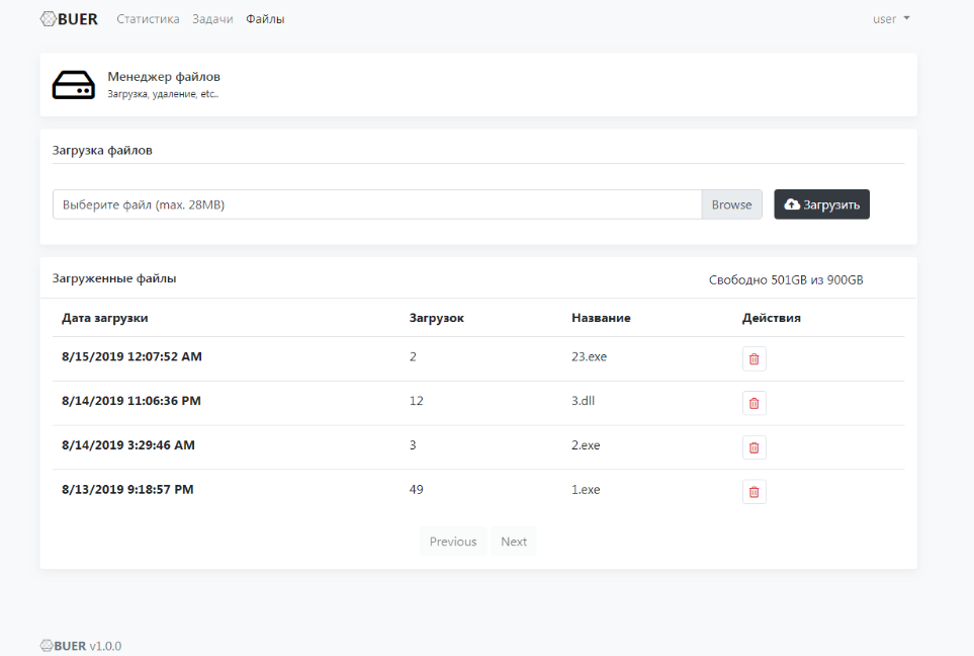 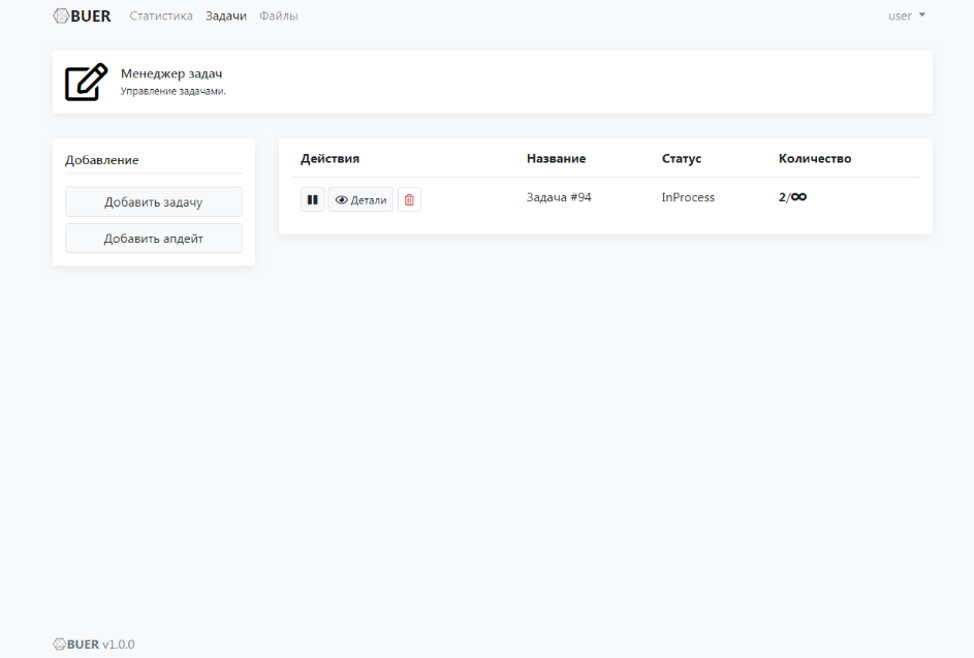 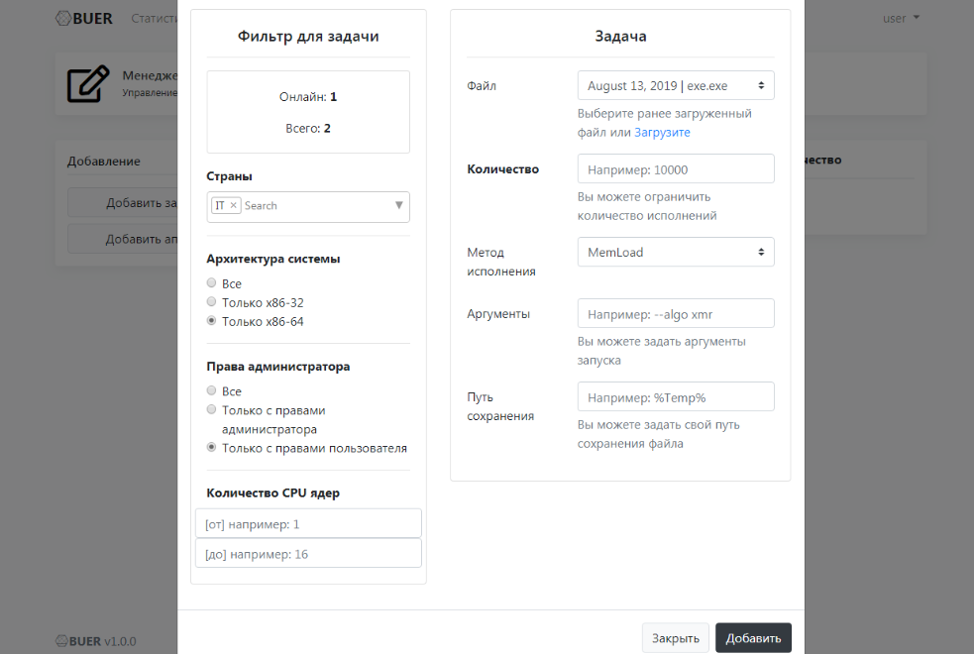 Buer Loader is a new downloader malware that downloads and executes additional payloads.

Figure 14: Malware check to make sure it is not running in specific countries

Persistence is set up by configuring a Registry RunOnce entry. Depending on the version, the registry entry will execute the malware directly or schedule a task to execute it.

This sample contains a function to encrypt strings. 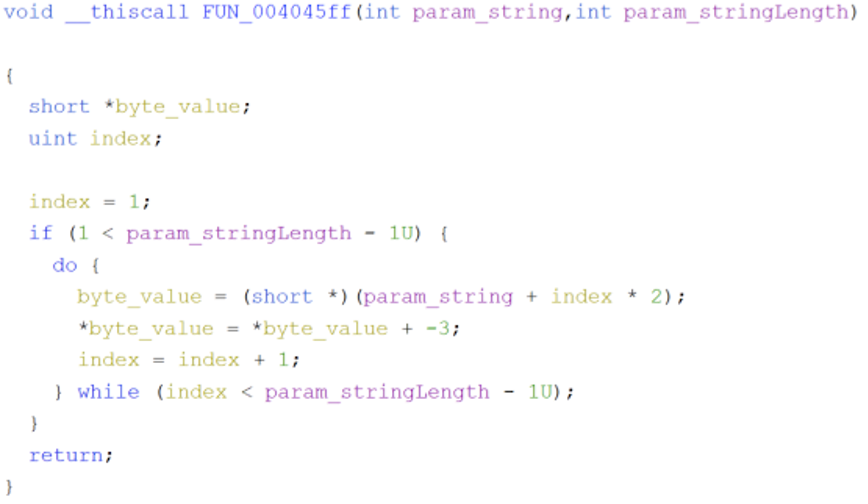 The following function is an example of how to decrypt the encrypted strings in Ghidra using Jython: 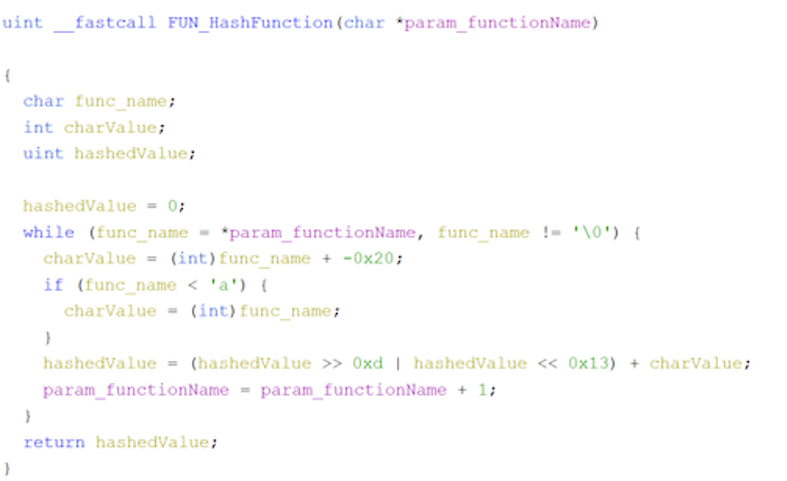 The following function is an example of how Python can be used to help resolve the API calls.

The following table contains a list of some selected hashes used and their corresponding Windows API name:

Command and control (C&C) functions are handled via HTTP(S) GET requests. An example command beacon looks like Figure 20:

These requests go to the “update API” and contain an encrypted parameter. This parameter can be decrypted by:

An example of the plaintext parameter is:

An example command beacon response is shown in Figure 21:

It can be decrypted similarly to the request parameter above, except that the hex-encoded bytes are separated by dash characters. An example plaintext response is shown in  Figure 22:

The decrypted text is a JSON object containing various options on how to download and execute a payload:

Payloads downloaded from the C&C server are done via requests to the “download API” as seen in Figure 23:

An example of the plaintext request parameter is shown below:

It contains the bot’s ID and “AccessToken” from the command beacon response. If the payload is downloaded from the C&C, it is encrypted with RC4. In the analyzed samples the key was “CRYPTO_KEY”.

The command beacon response contains a “modules” list. Proofpoint researchers have not observed Buer modules being used in the wild yet, but based on the code this list will contain module AccessTokens. The module file name is queried by sending an AccessToken to the “module API” of the C&C. The module will then be downloaded using the “downloadmodule API”. Once downloaded and decrypted, it is loaded using the “loaddllmem” method.

A new downloader, Buer, has appeared recently in a variety of campaigns, via malvertising leading to exploit kits; as a secondary payload via Ostap; and as a primary payload downloading malware such as The Trick banking Trojan.

The new loader has robust geotargeting, system profiling, and anti-analysis features and is currently being marketed on underground forums with value-added setup services. The Russian-speaking author(s) is actively developing the downloader with sophisticated control panels and a rich feature set, making the malware competitive in underground markets.

The downloader is written in C while the control panel is written in .NET core, indicating optimization for performance and small download footprint, as well as the ability to easily install the control panel on Linux servers -- built-in support for Docker containers will further facilitate its proliferation on rented hosts used for malicious purposes, and potentially, compromised hosts as well. The latter capability is included in its advertised features and release notes.