Share with your network!
July 24, 2019 Michael Raggi and Dennis Schwarz with the Proofpoint Threat Insight Team

Proofpoint researchers have identified a targeted APT campaign that utilized malicious RTF documents to deliver custom malware to unsuspecting victims. We dubbed this campaign “Operation LagTime IT” based on entities that were targeted and the distinctive domains registered to C&C IP infrastructure.

Additionally, this APT group utilizes Poison Ivy payloads that share overlapping command and control (C&C) infrastructure with the newly identified Cotx campaigns. Based on infrastructure overlaps, post-exploitation techniques, and historic TTPs utilized in this operation, Proofpoint analysts attribute this activity to the Chinese APT group tracked internally as TA428. Researchers believe that this activity has an operational and tactical resemblance to the Maudi Surveillance Operation which was previously reported in 2013 [1].

The lures used in the subjects, attachment names, and attachment content in several cases utilized information technology themes specific to Asia such as governmental or public training documents relating to IT. On one specific occasion an email utilized the subject “ITU Asia-Pacific Online CoE Training Course on ‘Conformity & Interoperability in 5G’ for the Asia-Pacific Region, 15-26 April 2019” and the attachment name “190315_annex 1 online_course_agenda_coei_c&i.doc”. The conference referenced in the lure was an actual event likely selected due to its relevance to potential victims. This is significant as countries in the APAC region continue to adopt Chinese 5G technology in government as well as heavy equipment industries. 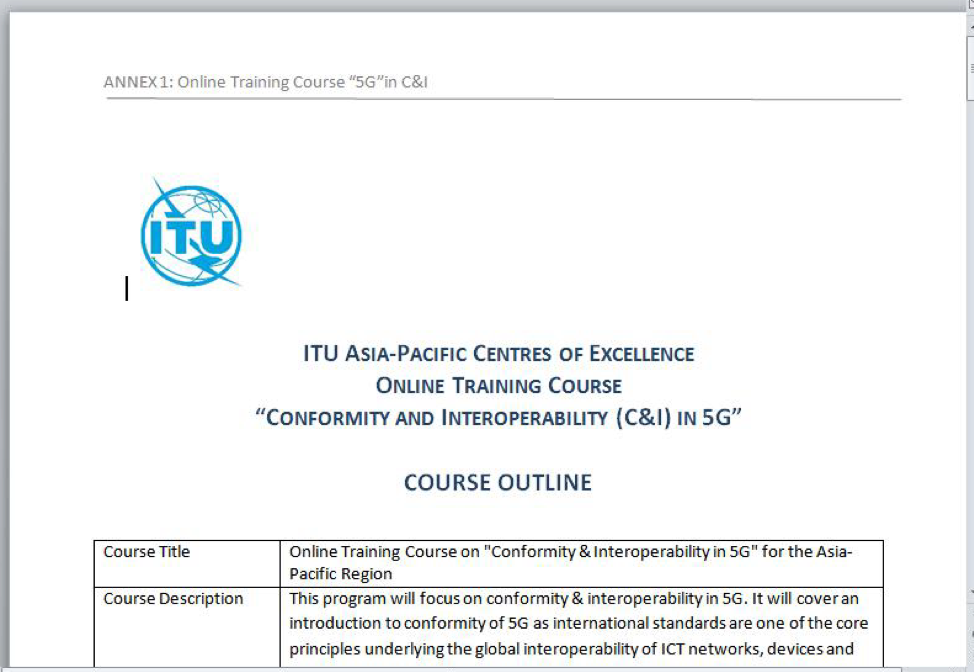 We identified several government agencies targeted as part of Operation LagTime IT. These agencies are responsible for overseeing IT, scientific research, domestic affairs, foreign affairs, political processes, and financial development.

As we previously noted, the malicious RTF attachments exploited vulnerabilities in the Microsoft Equation Editor, specifically CVE-2018-0798, before downloading subsequent payloads. The exploit uses an encoded RTF object to drop a PE file to the Windows temporary directory. The dropped PE file has the distinctive file name “8.t”. When executed, writes a Word Add-In file with the “.wll” extension to the Windows Startup directory, which runs the next time Word is opened. It should be noted that this dropper methodology is not unique to TA428, and has been identified by security researchers in campaigns related to at least four additional Chinese APT groups. RTF files leveraging this technique have historically contained the string "objw871\\objh811\\objscalex8\\objscaley8" which has been noted by researchers at Anomali [2] and FireEye. Researchers have also recently observed this RTF weaponizer tool in commodity campaigns delivering Async RAT.

After it is executed, the .wll file renames itself as RasTls.dll. Simultaneously, it decrypts a legitimate Symantec PE binary commonly named IntelGraphicsController.exe or AcroRd32.exe. This legitimate Symantec binary is used to side-load RasTls.dll using DLL search-order hijacking leading to the execution of Cotx RAT malware. Once executed the RasTls.dll file next resolves the addresses of the DLL libraries it is programmed to access and ensures that it is only running in one of five predetermined processes. These processes are winword.exe, excel.exe, powerpnt.exe, eqnedt32.exe, and acrord32.exe. The first four of these processes are associated with Microsoft Word, Excel, and PowerPoint exploits, as well as the Equation Editor exploit used by the initial malicious RTF in this campaign. The last process is utilized as part of the loading process for Cotx RAT and involves the legitimate Symantec binary noted above. The inclusion of the processes excel.exe and powerpnt.exe suggests that this stage one malware may be capable of utilizing .xls and .ppsx files as droppers. Researchers at SectorB06 [4] have noted this stage-one payload and indicated that throughout the above process it is running a “CheckRemoteDebuggerPresent” function to prevent analysis and debugging by researchers.

For persistence, Cotx stores files in a directory “Intel\Intel(R) Processor Graphics”. The location of this folder varies among samples with both the %AppData% and %PROGRAMFILES% directories being observed.

The command and control structure of Cotx RAT is proxy aware. It utilizes wolfSSL for TLS encrypted communication. The initial beacon contains “|”-delimited system information. The data included in the beacon is Zlib compressed and encrypted with AES-192 in CBC mode utilizing the same keys as the configuration. The following values are included:

Commands from the C&C are received from the malware beacon. This data is AES-encrypted. We observed the following commands:

TA428 threat actors also delivered Poison Ivy malware payloads. In a limited number of cases, we observed attachments utilizing the 8.t dropper methodology described above. However, the majority of Poison Ivy payloads were dropped as PE files named OSE.exe when the RTF attachment was executed and an Equation Editor vulnerability was successfully exploited. The Poison Ivy samples all communicated with the IP 95.179.131[.]29. We identified earlier variants of Poison Ivy malware that utilized the above IP via open source research, which used the file names bubbles.exe and sfx.exe. Examination of the Poison Ivy malware configurations indicated that all samples shared the password “3&U<9f*lZ>!MIQ” while campaign and group IDs, as well as mutexes varied across campaigns.

An examination of the separate C&C infrastructure utilized by Cotx RAT and Poison Ivy payloads revealed further overlaps between these campaigns. A review of passive DNS information indicated that the C&C IPs hosted subdomains that share the root domain vzglagtime[.]net. We found that the Poison Ivy C&C IP hosted the domains f1news[.]vzglagtime[.]net and news[.]vzglagtime[.]net. The Cotx RAT C&C IP hosted the hostname mtanews.vzglagtime[.]net. The latter of these domains was previously reported by security researchers to have been a C&C address observed in a malware implant targeting the East Asian Telecommunications and Transportation sectors in January 2019. The presence of related domain registrations on disparate malware IP infrastructure also contributed to analysts’ decision to classify these campaigns collectively under Operation LagTime IT.

Proofpoint analysts assess that Operation LagTime IT is likely a continuation of targeted activity by APT actors aligned with Chinese state interests. This operation, centered around East Asian governmental agencies, may represent efforts to satisfy espionage and intelligence requirements relative to China’s regional neighbors. While not revolutionary in its approach or malware design, TA428 actors demonstrated significant persistence in compromising victims and utilized custom malware. The defined scope of targeting in this operation including government information technology agencies demonstrates a focus on high-value targets. While ultimately the motivation for this APT campaign remains opaque, what is certain is that TA428 persists in targeting users responsible for the orchestration of governmental systems in East Asia.