Share with your network!
November 04, 2020 The Proofpoint Threat Research Team

In July 2020, cryptocurrency wallet company Ledger revealed a breach of 9500 customers’ names and contact information. In their announcement, they caution users to be aware of credential phishing attempts and state that they will “never ask [users] for the 24 words of [their] recovery phrase.”

On October 25, 2020, Proofpoint researchers discovered several thousand messages claiming to be from Ledger with subjects like, “Your Ledger Live client may be compromised” and “Your Ledger assets may be at risk”. The messages don’t appear to be targeted at any specific industry or geography.

Figure 1: Email lure claiming to be from Ledger

The messages claim that Ledger has experienced a breach and that recipients should assume their “cryptocurrency assets are at risk of being stolen.” The suggested remediation is to download the latest version of Ledger Live and set up a new PIN. In line with Ledger’s real statement following the June breach, the message never suggests that the user will be asked to share their recovery phrase. Instead, at the bottom of the message, a button prompts the recipient to “Download latest version” of Ledger Live.

Figure 2: Additional email lure claiming to be from Ledger

The button takes the user to a spoofed Ledger Live download page with links to malicious downloads for Windows, MacOS, and Linux. The fake download page is hosted at “hxxps://xn--ledgr-9za[.]com/ledger-live/download/”, and when punycode is rendered in a user’s browser, it appears extremely similar to the real download page URL:

Beyond the URL, the landing page for the malicious download closely mirrors the legitimate Ledger page, appearing to offer downloads for a variety of desktop platforms and mobile. However, there is one notable change.Figure 5: Spoofed Ledger Live download page with links to malicious executables

Upon clicking the download button on the spoofed page, the installer is downloaded to the user’s machine.

The fake installer and fake Ledger Live have the following digital signature:

Figure 7: Signature for the installer and spoofed Ledger Live downloads

While Proofpoint researchers have not conducted a full analysis on the malware, at the very least the backdoored Ledger Live application is capable of stealing recovery phrases. The Ledger hardware wallets themselves are not targeted in this campaign, instead users may be tricked into revealing their recovery passphrase through social engineering. A stolen recovery phrase may be used by an actor to generate a copy of the user’s private keys, allowing them to steal any digital currencies associated with those private keys.

Figure 8: Backdoored Ledger Live “Get started with your Ledger device” with removed options

After selecting the “Restore device from Recovery phrase” and choosing a Ledger wallet, the backdoor application’s next step is the “Recovery phrase” (Figure 10), which is normally the third step in the legitimate application (Figure 11). If a user is tricked into providing their recovery phrase in this stage of the backdoored application, the phrase is sent to actor-controlled infrastructure where they may then freely steal any digital currencies associated with that phrase. 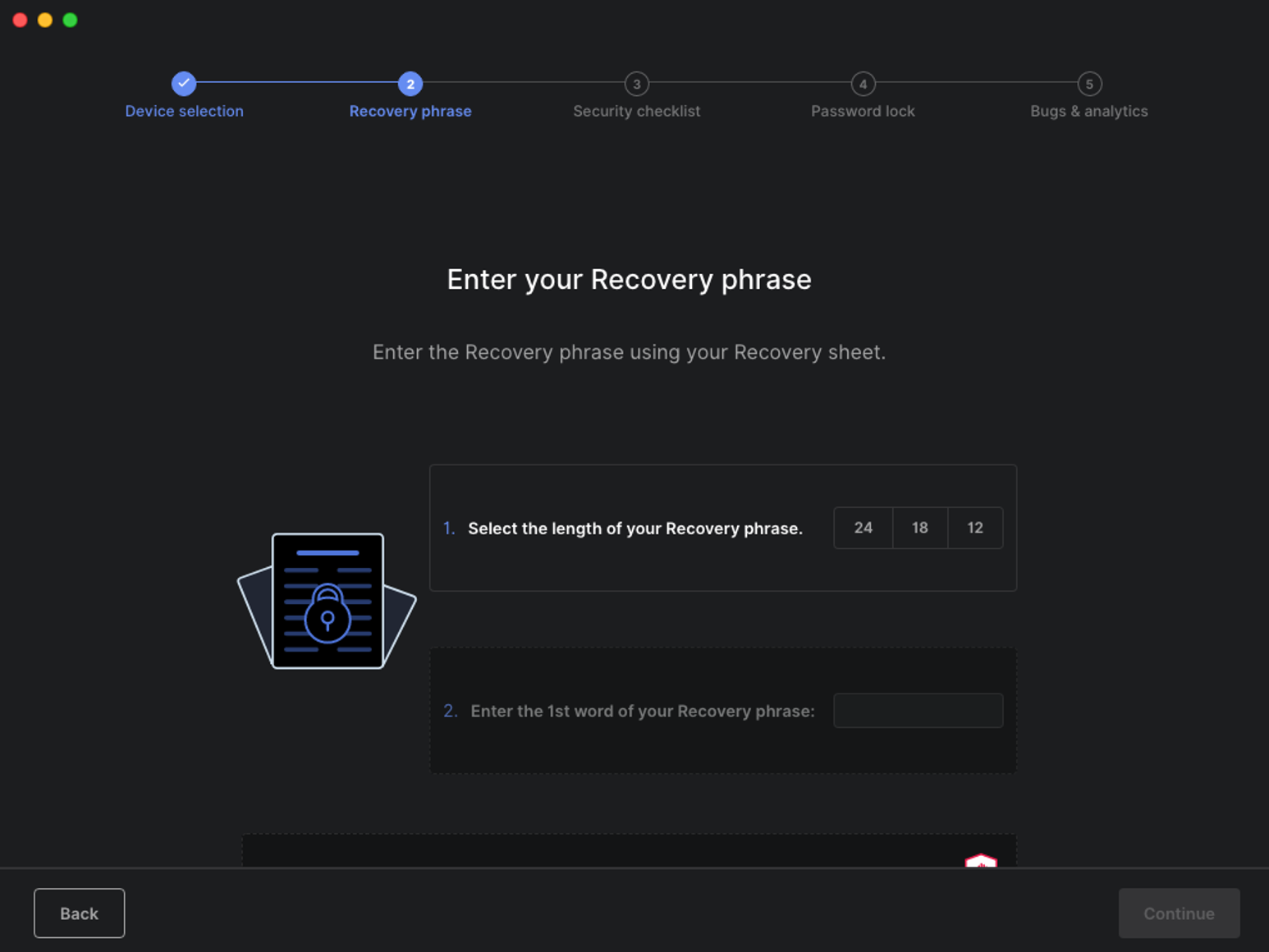 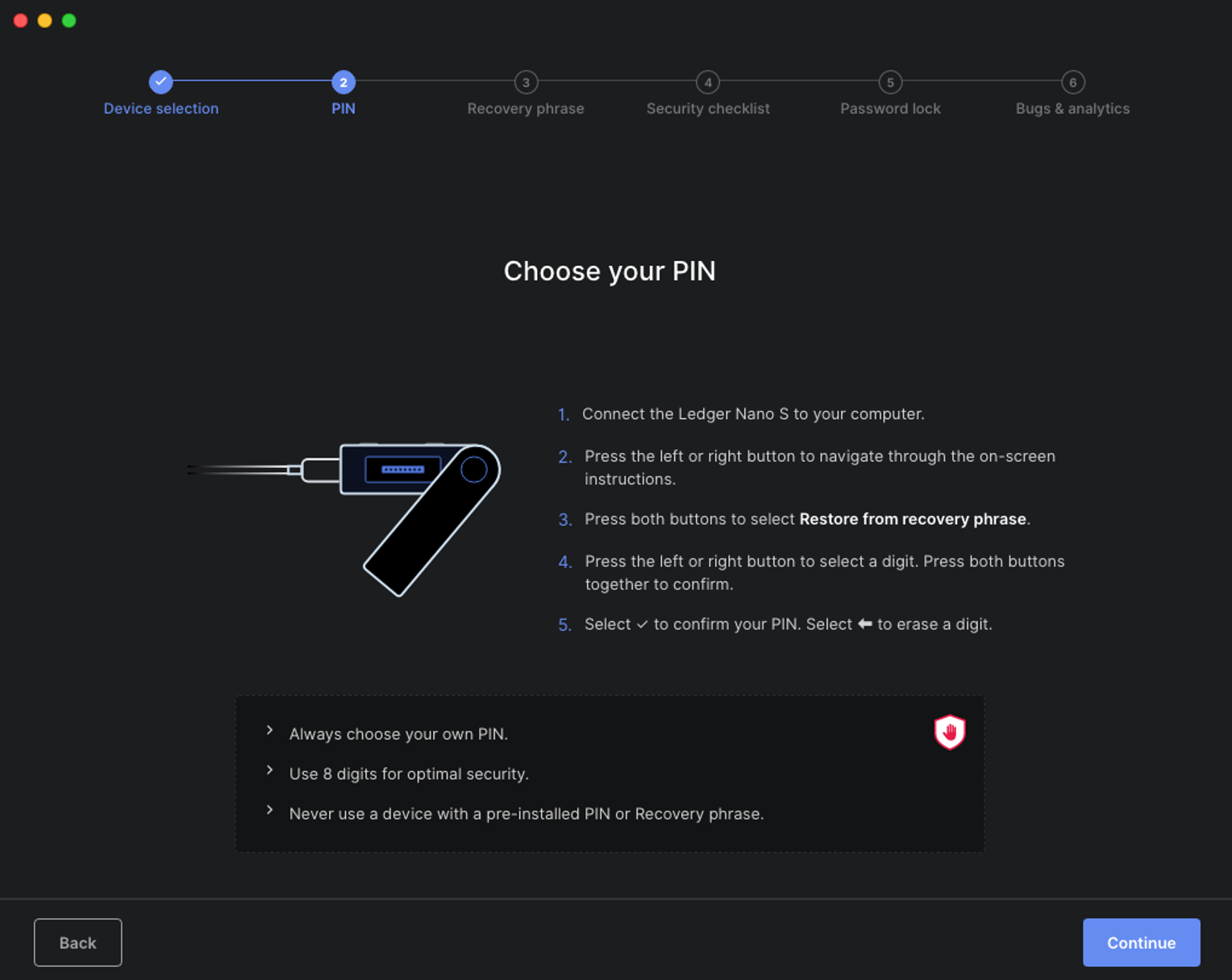 The malicious code modifies the number of options available on the “Get started with your Ledger device” page based on whether the installation has been “registered” with the attacker’s command and control (C2) server. This is accomplished first with a HTTP GET request to the C2 server and checks for the following response string: “unregistered” (Figure 12). If the server responds with “unregistered” then only the “noDevice” and “restoreDevice” options are displayed (Figure 8), otherwise the full list of options is displayed (Figure 9). This request is also sent at every onboarding check (Figure 13).

If a user is tricked into entering their recovery phrase, the malicious code will check each entered word against a hardcoded list of BIP-39 valid words. If the word is found in the list (Figure 14), then a malicious “work()” function is executed until enough words making up the completed mnemonic sentence have been entered. Once all the words have been entered then the full mnemonic sentence is sent to the actor controlled C2 via a HTTP POST request (Figure 15). Once a recovery phrase has been stolen, the actor is free to generate a private key with that phrase and are then be able to transfer any associated digital currencies to their own wallet.

Sometime on or before October 31, 2020, the actor launched a new campaign that similarly attempts to trick their targets into revealing their recovery phrase. Instead of using a backdoored Ledger Live, however, this campaign is purely web-based. At the time of writing, this campaign has not been observed via email. The landing pages that redirect to a recovery phrase-stealing webpage were likely sent through SMS messages. One recovery phrase-stealing website was hosted at the following punycode URL: hxxps://xn--ldgr-vvac[.]com/update/ (Figure 16). Similar to the spoofed Ledger Live download page, the decoded text from the punycode domain was made to look like the official Ledger website (ledger[.]com): lėdgėr[.]com. 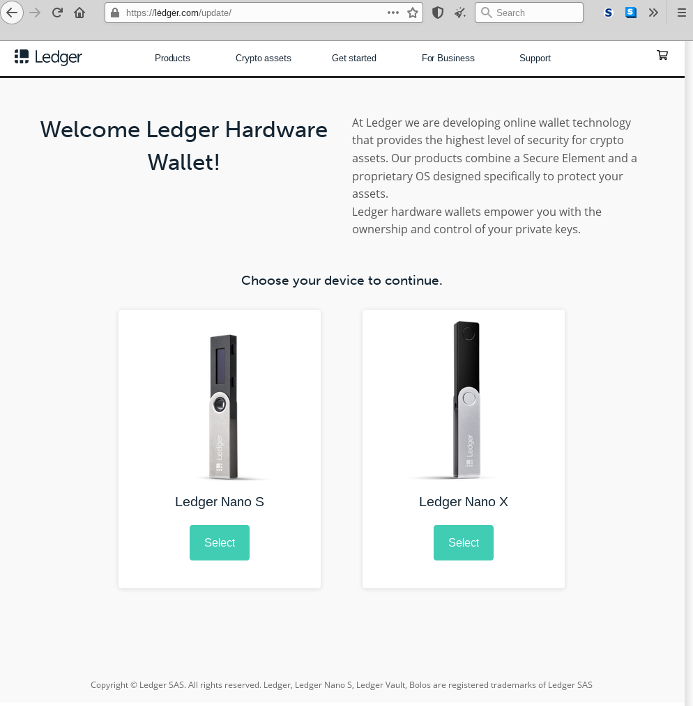 After selecting a wallet, the webpage navigates to a time locked page requesting the target to connect their device (Figure 17). Regardless of whether a device is connected, the page will eventually unlock the Continue button. When clicked, the button presents a fake error message asking the target to select their recovery phrase length (Figure 18). The final page asks for each word to be entered separately (Figure 19), and after all the words are entered then they are sent via a POST request to the same server.