Much attention has been focused recently on ransomware and other threats that go after consumers and businesses directly for monetary payouts. Still, point-of-sale (POS) malware continues to be an important source of stolen credit card data and associated revenue for cyber criminals.

The ongoing rollout of chip-and-pin credit cards and tighter standards following the retail megabreaches of 2014 have put further pressure on the POS malware black market. But as we have seen with the AbaddonPOS malware described here, POS malware is not just alive and well—it’s being actively developed.

On May 5, a financially motivated actor whom Proofpoint has been tracking as TA530 (also featured in our previous blog post "Phish Scales" [1]) sent out a highly-personalized email campaign targeting primarily retail companies and attempting to install TinyLoader and AbaddonPOS point-of-sale malware. The retail vertical was likely chosen due to the higher likelihood of infecting a POS system. We first observed AbaddonPOS when it was delivered by Vawtrak [2] in October of 2015. We have also found that TinyLoader and AbaddonPOS have since been updated in several ways.

The messages we observed used subjects such as “Group Booking at [company name]” and the personalized attachment names such as:

Clicking the “Enable Content” button enables the malicious macro, which then begins the infection by downloading TinyLoader, which in turn downloads AbaddonPOS.

Most of the messages we saw were delivered to retail companies (Figure 3). 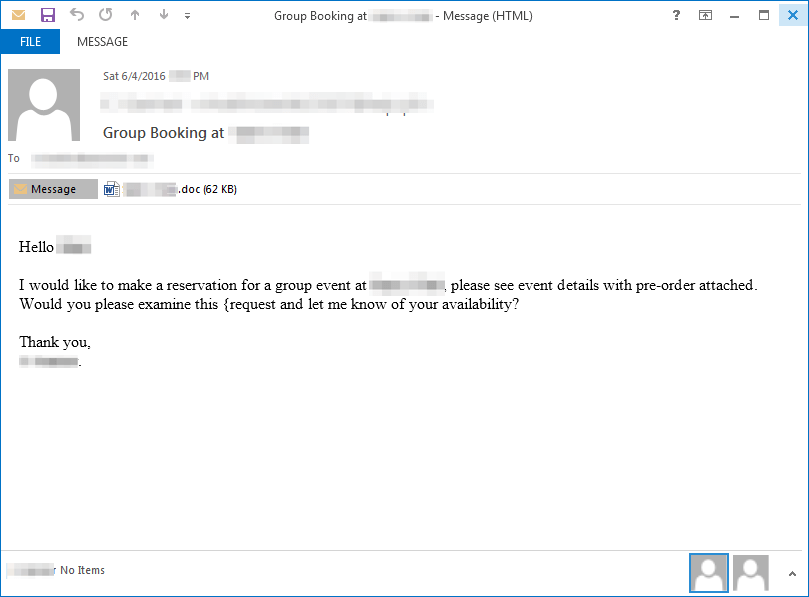 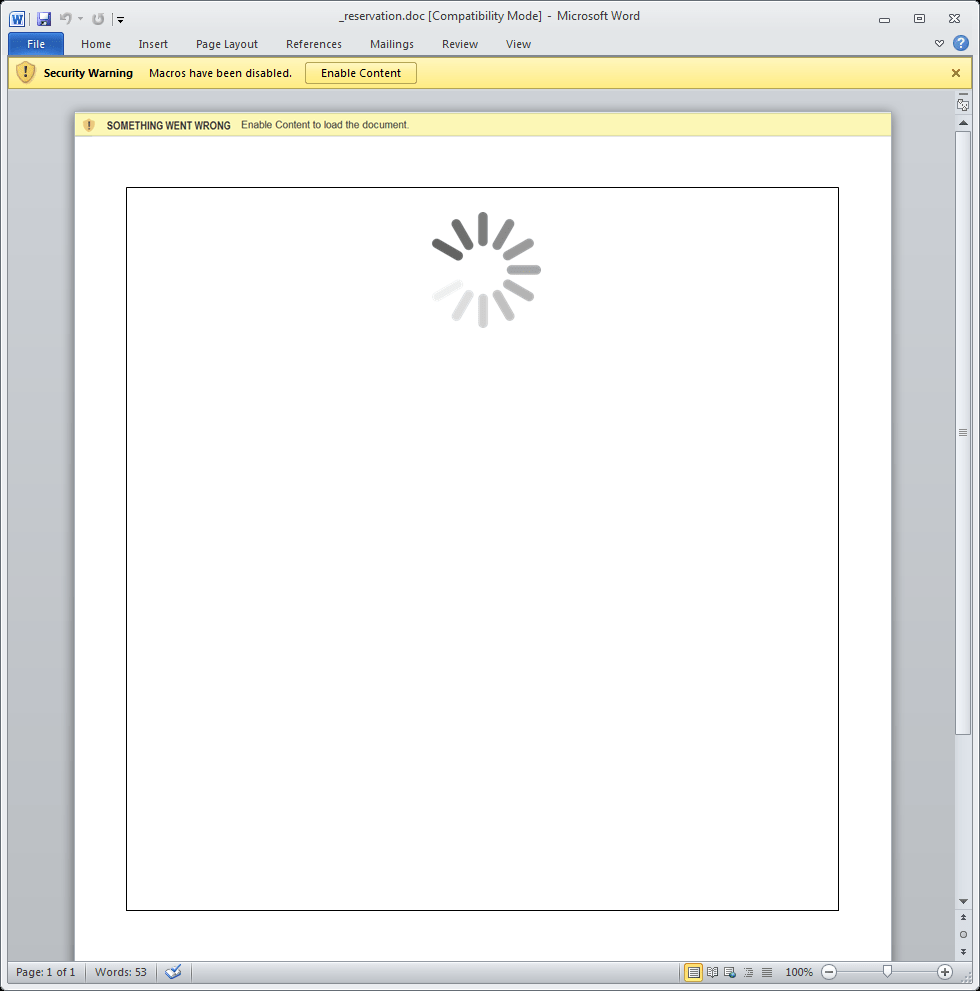 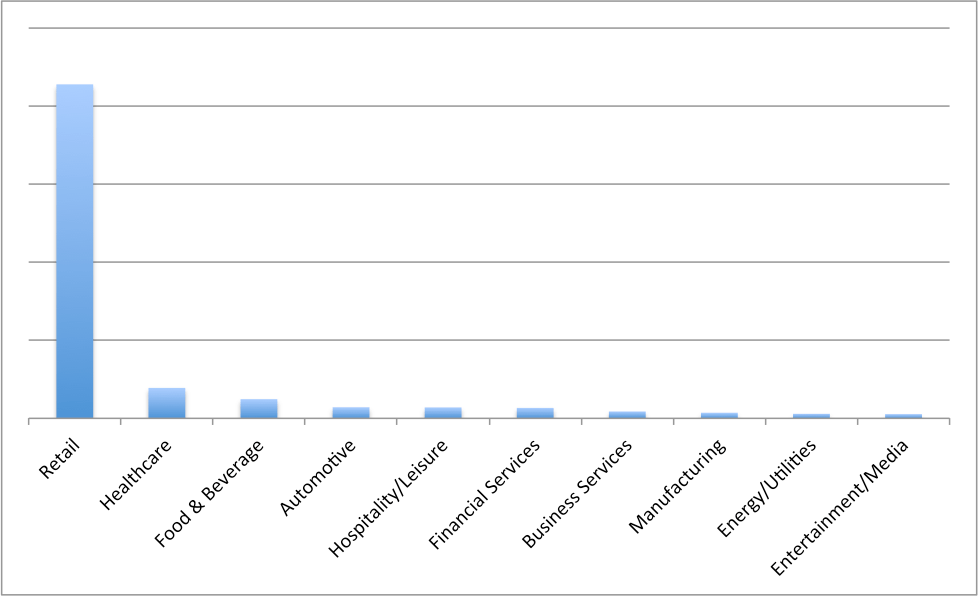 The variant of TinyLoader used in this campaign is similar to the one we previously had analyzed in connection with AbaddonPOS. One significant change includes the addition of a basic 4-byte XOR layer of obfuscation over the shellcode that is received from the command-and-control (C&C) server (Figure 4). 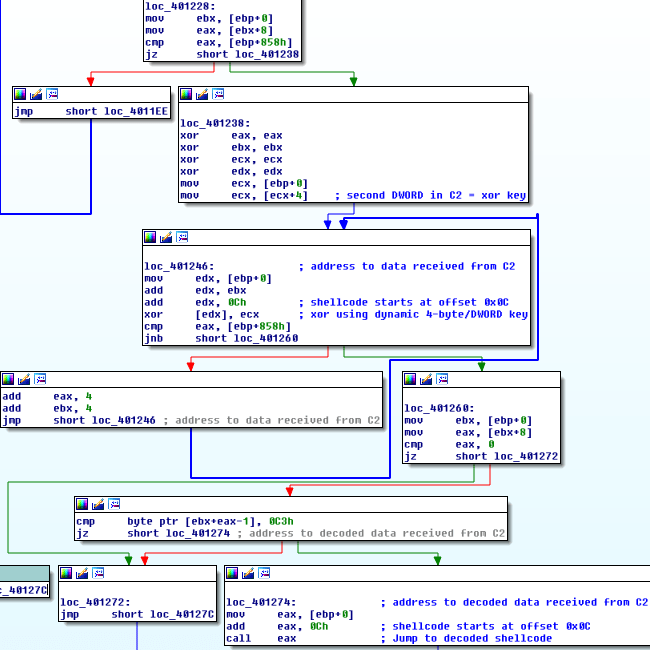 The XOR key is dynamically generated by the C&C and is different in every session. Once the shellcode is decoded, execution is immediately passed to the decoded shellcode. Although the controllers of TinyLoader could theoretically perform any action through custom shellcode, we are still observing this family of malware being used as a downloader. Figure 5 shows a TinyLoader response containing encoded shellcode to build a fake HTTP request used to download a payload.

Once the shellcode is decoded, the strings used to craft an HTTP request can be seen (Figure 6). After this code is loaded, the TinyLoader C&C operator(s) is free to provide a target IP and URI to instruct an infected bot to retrieve a payload.

The AbaddonPOS downloaded in this campaign functions much like the original samples we discovered. It does, however, include a few significant changes:

AbaddonPOS utilizes both lists separately from each other. That means the common process name list has no effect on the POS name list. Both lists are also checked using the exact same code. However, different results occur based on whether execution is currently in the main thread or a spawned thread. The authors use a hardcoded 0x0C0C0C0C value (Fig 10) to implement this tracking capability.

Figure 12: Utilizing process list depending on whether execution is in main or spawned thread

This implementation could result  from a mistake on the part of the malware author, but it seems more likely that the author is testing various blacklist/whitelist implementations in this sample. Dedicating a thread to only processes with known POS-related names ensures a thread is always scanning those processes more often vs. the main thread used to scan all non-system related processes. Also, it would not be surprising to eventually see AbaddonPOS variants that contain only the common process name method or POS process name method rather than both. 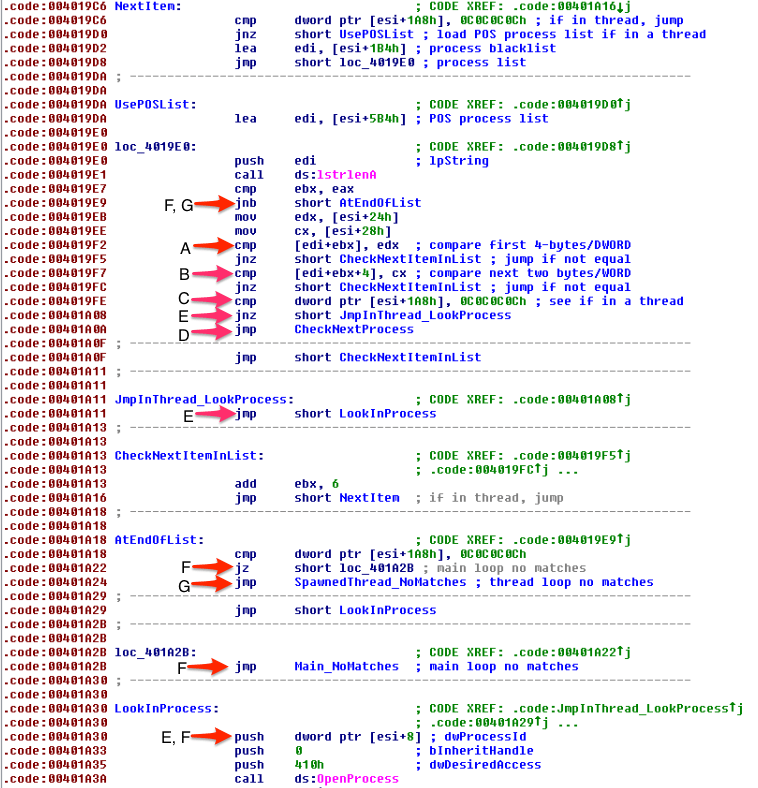 Some minor changes were also made to the way stolen credit card data is exfiltrated. First, the IP address is no longer stored as an ASCII string (Fig. 14). That also means the inet_addr API is no longer needed. Finally, the hardcoded XOR key was changed to 0x4C5D6E7F (Fig. 15).

Although the second XOR key was changed, the overall method of encoding and exfiltration of the data has stayed almost identical (Fig. 16, 17) when compared to our previous analysis.

TinyLoader and AbaddonPOS are under active development. We expect both to continue to appear in email attacks as cybercriminals target point-of-sale systems to harvest credit card data. Despite changes in the credit-card landscape and more stringent PCI DSS compliance requirements, credit card-related cybercrime remains profitable for threat actors when it can be conducted at scale. Comprehensive email, network, and endpoint protection—along with user education—remain the best ways to protect systems and customer data.