Share with your network!
September 26, 2019 Bryan Campbell and Jeremy Hedges with the Proofpoint Threat Insight Team

While not a new development, the use of Microsoft SQL queries to retrieve next-stage payloads has been relatively rare as a form of malware distribution. In August 2019, however, Proofpoint researchers encountered new Microsoft Office macros, which collectively act as a staged downloader that we dubbed “WhiteShadow.” Since the first observed occurrence of WhiteShadow in a small campaign leading to infection with an instance of Crimson RAT, we have observed the introduction of detection evasion techniques. These changes include ordering of various lines of code as well as certain basic obfuscation attempts.

In August 2019, the macros that make up WhiteShadow appeared in English-language cleartext. The only observed obfuscation technique was in the simple case altering of strings such as “Full_fILE” or “rUN_pATH.” In early September, we observed slight misspellings of certain variables such as “ShellAppzz.Namespace(Unzz).” Mid-September brought another change in macro code using reversed strings such as “StrReverse("piz.Updates\stnemucoD\")”. The most recently observed versions of the WhiteShadow macros contain long randomized text strings such as “skjfhskfhksfhksfhksjfh1223sfsdf.eDrAerTerAererer”. Overall, the macro code still remains mostly human readable, with the same functionality as previously observed.

When recipients open malicious document attachments in these campaigns and activate macros, WhiteShadow operates by executing SQL queries against attacker-controlled Microsoft SQL Server databases. The malware is stored as long strings that are ASCII-encoded within the database. Once retrieved, the macro decodes the string and writes it to disk as a PKZip archive of a Windows executable. Once extracted by the macro, the executable is run on the system to start installing malware, which is determined by the actor based on the script configuration stored in the malicious Microsoft Office attachments.

Early campaigns delivered Crimson malware, which has historically been linked to specific actor activity. However, Proofpoint researchers currently have no evidence tying this current round of malware distribution with previous Crimson campaigns [1]. 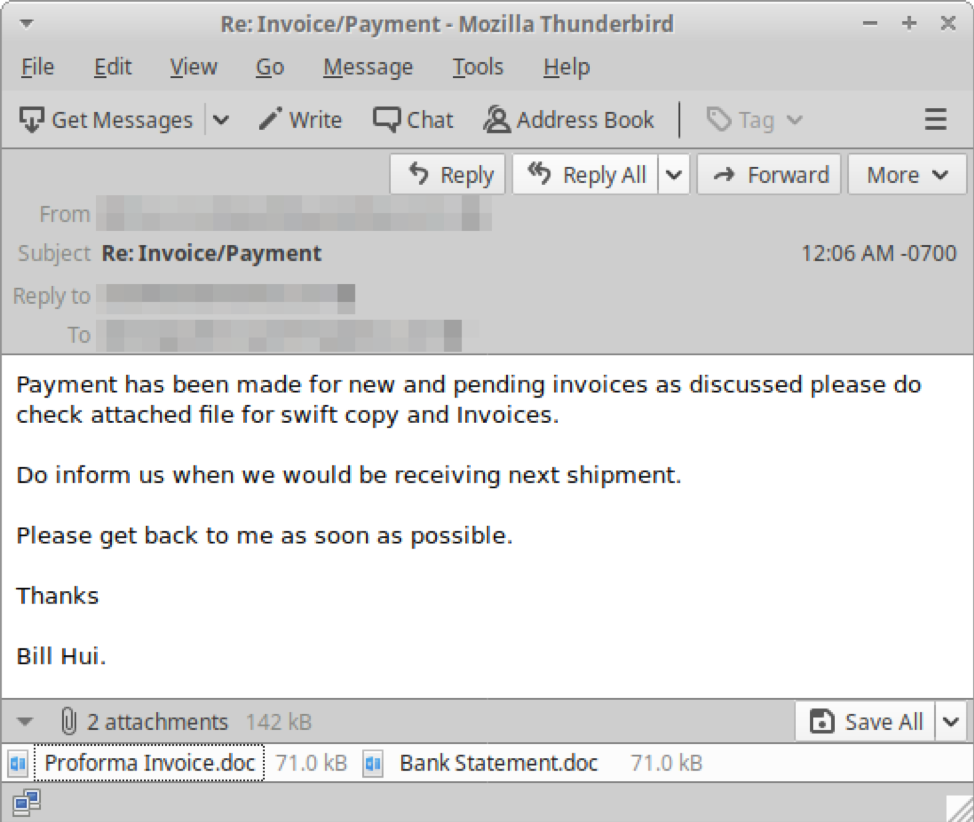 It appears that WhiteShadow is one component of a malware delivery service, which includes a rented instance of Microsoft SQL Server to host payloads retrieved by the downloader.

The following chart is a chronology of campaigns, relative message volume, and payload summary since we first observed WhiteShadow in the wild.

WhiteShadow uses a SQLOLEDB connector to connect to a remote Microsoft SQL Server instance, execute a query, and save the results to a file in the form of a zipped executable.

The SQLOLEDB connector is an installable database connector from Microsoft but is included by default in many (if not all) installations of Microsoft Office. Once the connector is installed on the system, it can be used by various parts of the Windows subsystem and by Visual Basic scripts including macros in Microsoft Office documents. We have observed several malware strains downloaded in this manner by WhiteShadow:

The malware infection occurs in the following sequence:

The sequence is illustrated in Figure 2: 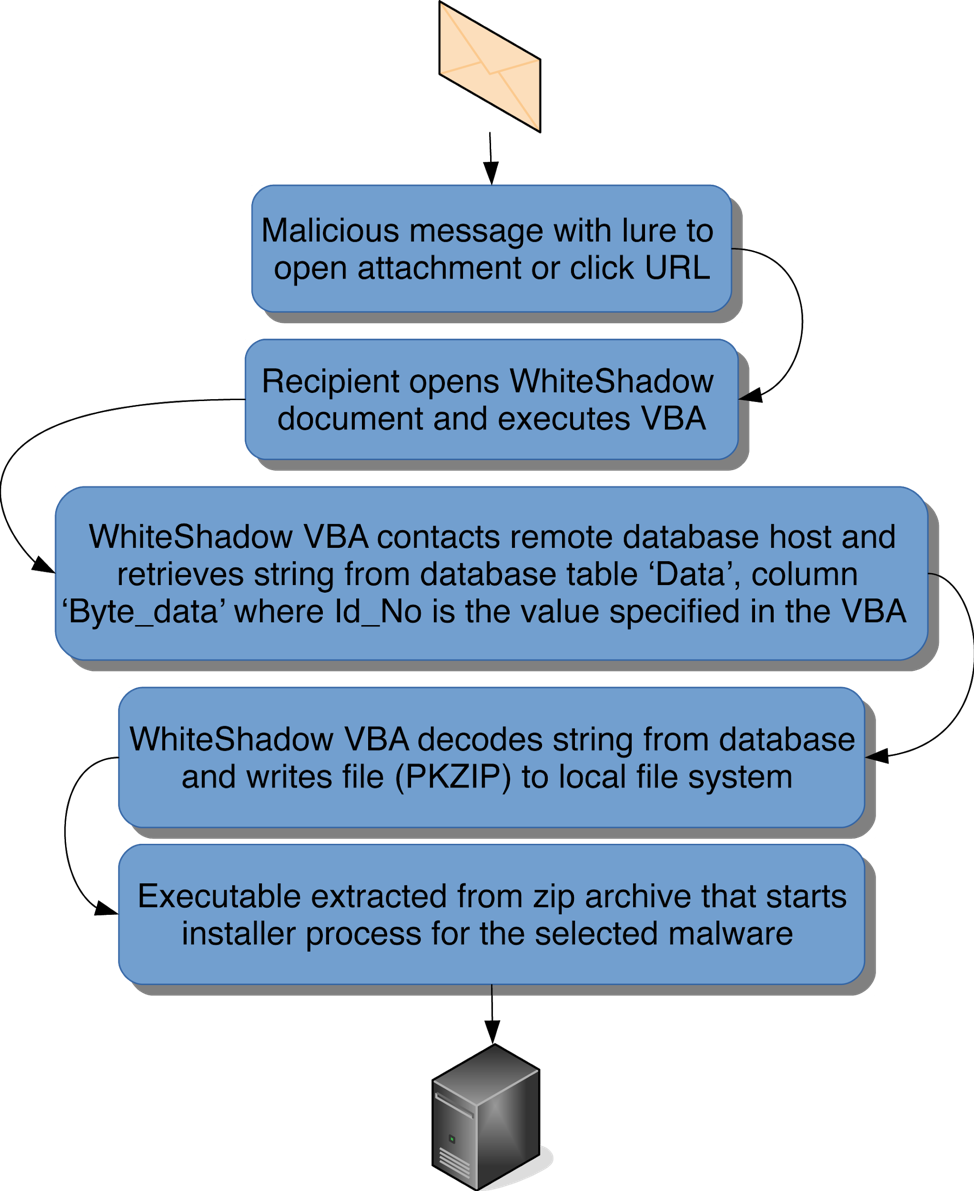 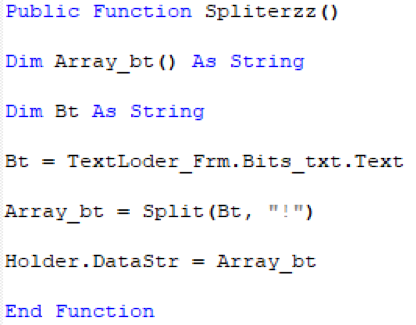 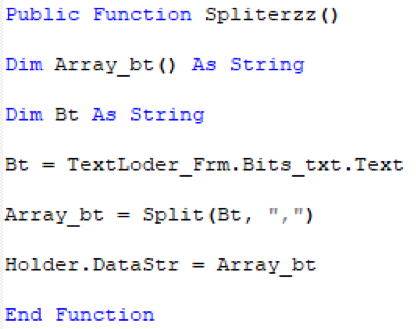 Figure 5: ASCII representation of the ‘encoded’ PKZIP file before written to disk, line breaks added for comparison to Figure 6

Figure 6: Hex editor representation of the ‘decoded’ PKZIP file as written to disk.

We have observed multiple databases all hosted on a subdomain of mssql.somee[.]com:

In each of the databases, the data that was being accessed by WhiteShadow was stored in a table called ‘Data,’ which always contained three columns:

Proofpoint researchers have observed rows being added, removed, and in rare cases, updated in these databases.

Proofpoint researchers also noticed similarities in some cases with the data in the ‘Net_Ver’ column and Affiliate/Group structures in some of the malware that was being dropped relative to a specific ‘Id_No’;

Table 2: Illustration of how the Net_ver identifier column corresponds with the associated configured malware identifier

It should be noted that bytesdata’s Id_No ‘4’ was first identified as Nanocore, but was updated two days later to be Crimson, where the Net_ver was updated from ‘jay’ to ‘jay2’

We also observed similarities between multiple MSSQL hosts, suggesting they are likely managed by the same actor:

While analyzing the various payloads hosted in the database, we discovered one family of malware in particular - Crimson - that had several updates since our last analysis of the malware [2]. Updated commands are listed below:

Adds an executable to Environment.SpecialFolder.CommonApplicationData\\%install_folder%\\updates\\ and executes it via Process.Start(exe_path);

Captures a JPEG format screenshot of the infected machine and sends it to the C&C using the C&C response command:

This is similar to the previously documented 'procl' command; it creates a concatenated string of processes with a format similar to:

for each process running on the system, enumerated via:

The input to this function is a string and it compares the string to the current running process executable path. If that path is different, it 'moves' the executable via:

It will then install the modified path into the common ‘CurrentVersion AutoRun’ registry key:

The remaining non-Crimson samples appeared to be largely the same as those currently documented and observed in the current threat landscape.

Although not a new development, the use of MSSQL queries to retrieve next-stage payloads is unusual in the wild. In late August 2019, Proofpoint researchers encountered a new staged downloader which uses this uncommon method and named it “WhiteShadow”. More importantly, this appears to be a new malware delivery service, allowing a range of threat actors to potentially incorporate the downloader and associated Microsoft SQL Server infrastructure into their attacks. We have observed actors using WhiteShadow to install RATs, downloaders, and keyloggers including Agent Tesla, AZORult, Crimson, and others. Organizations need to be cognizant of both the incoming malicious email and outbound traffic on TCP port 1433 which should be blocked or at least restricted on modern ACL configurations in firewalls today. Currently, these campaigns are relatively small, with message volumes in the hundreds and thousands, but we will continue to monitor associated trends.