Share with your network!
October 14, 2019 The Proofpoint Threat Insight Team

In our September 5, 2019, Threat Insight post, “Seems Phishy: Back To School Lures Target University Students and Staff,” we discussed the seasonal uptick of phishing campaigns that are directed at university students and staff, usually between June and October of every year. Since our blog post, colleagues at Secureworks have provided further details on one actor we highlighted, tracked by Proofpoint as TA407, also known as Silent Librarian, Cobalt Dickens, and Mabna Institute. In this blog, we provide additional insight into the actor and their evolving TTPs in ongoing, academia and university campaigns.

Like many educational phishing attacks, campaigns associated with TA407 are typically not geographically targeted, but rather tied to specific universities, with phishing landing pages developed for library and student or faculty access portals. While many of the attacks are directed at schools in the United States, Proofpoint researchers regularly observe campaigns affecting universities primarily in North America and Europe.

Silent Librarian is a prolific financially motivated actor operating out of Iran. In early 2018, the US Department of Justice indicted nine members of the cybercrime group for hacking, wire fraud, and identity theft. In particular, the group was cited for “obtain[ing] unauthorized access to computer systems, steal[ing] proprietary data from those systems, and sell[ing] that stolen data to Iranian customers, including the Iranian government and Iranian universities.”

The indictment alleges that between 2013 and 2017, TA407’s activities resulted in the following damages:

Victims of the scheme included:

The DOJ indictments, however, have had no appreciable effect on the group’s activities and university email account compromises are ongoing, building on the success of previous campaigns.

Since the beginning of 2019, Proofpoint researchers observed several TA407 campaigns distributing phishing URLs leading to clones of university library login pages. Although TA407 has made minor updates to their social engineering techniques and infrastructure, their strategies have been overall rather consistent. Many of these campaigns use the same lures with minor variations in phrasing.

Historically, the group has employed the use of a series of phishing origin points, abusing access first at one university and then another. TA407 makes extensive use of Freenom domains to host credential phishing landing pages; the group then abuses compromised accounts at universities to phish users at other universities, compromising additional accounts and spreading from school to school.

Proofpoint researchers have observed changes in TA407’s tactics, techniques, and procedures (TTPs), particularly in their use of URL shorteners, linking, and abuse of legitimate services and infrastructure. While the group does not always use URL shorteners, these frequently appear in their mix of linking and redirection techniques.

The following Freenom domains were observed in use by TA407 in September. A complete list of such domains used since January appears in the Appendix. 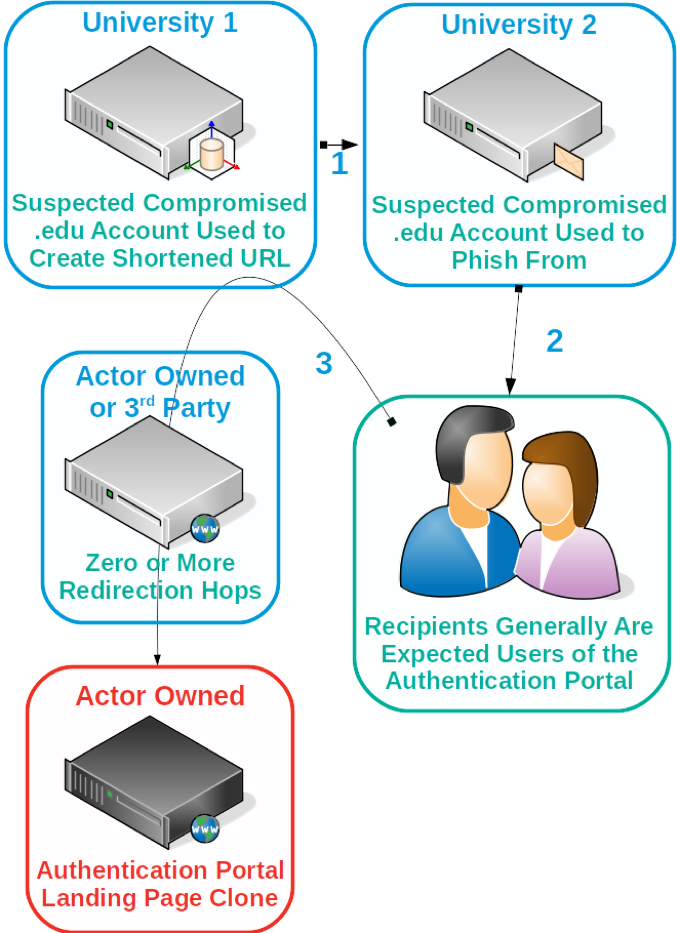 Proofpoint researchers frequently observe Silent Librarian’s phishing attempts originating from a university unrelated to their current target using a separate, unrelated university’s URL shortening service. This short URL links to a phishing landing page either directly or via one or more third-party sites that eventually lands the user on a clone of a login portal hosted on an actor-controlled server.

The following illustration depicts the attack flow of the actor’s use of phishing links starting at any of the redirection phases. Variation between university-based URL shorteners and free shorteners represents one of the shifting TTPs observed in Silent Librarian’s recent activity.

Over time, Proofpoint researchers have observed TA407 abuse several short URL services for initial redirection to phishing landing pages. These have included the now discontinued Google URL shortening service, .ir-based short URL services, and .edu URL shorteners. We observed apparent experimentation with university-based URL shorteners prior to the discontinuation of Google’s goo.gl services. Earlier in 2019, after goo.gl was discontinued, abuse of university URL shortening services appeared to increase and has been observed as recently as September of 2019.

Very little has changed with TA407’s phishing lures in 2019. Most phish lures are themed around library access. 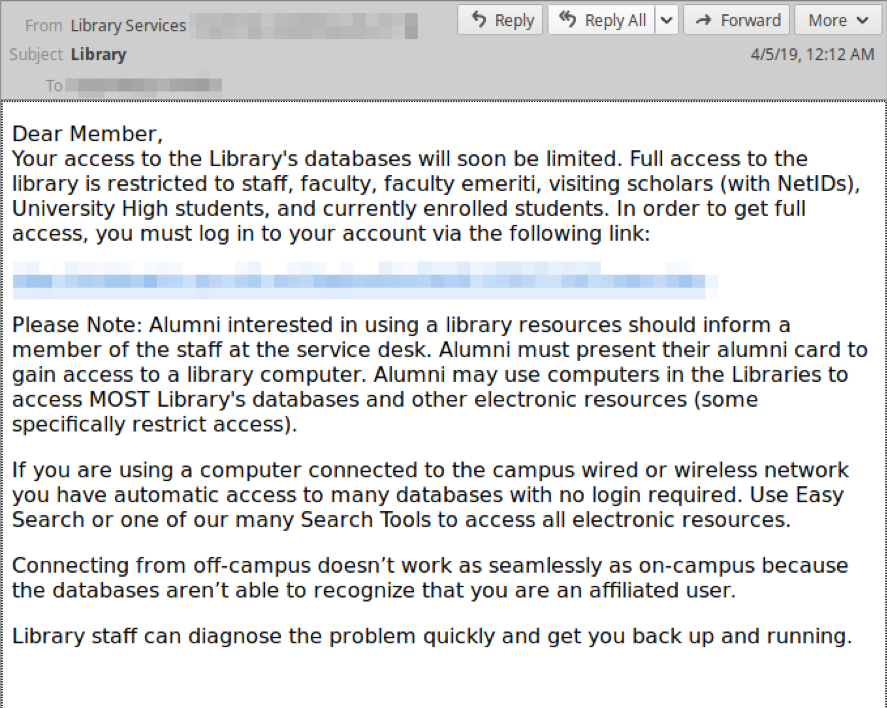 Figure 3: Example of a library access phish lure from TA407

Over time, Proofpoint researchers have observed slight adjustments in lure verbiage, but most continue to emphasize loss of library access privileges: 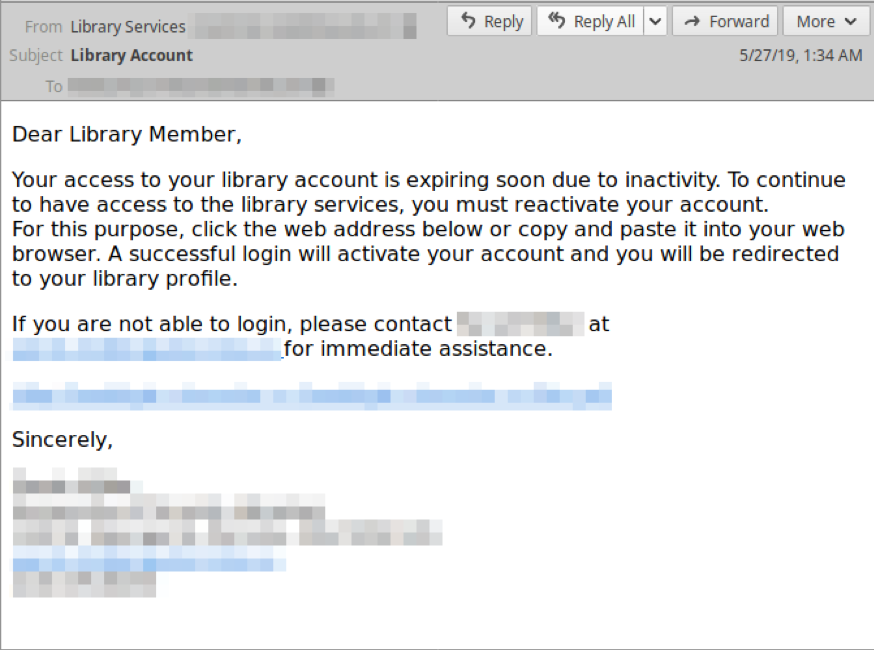 Figure 4: Example of how TA407’s lure verbiage has evolved over time 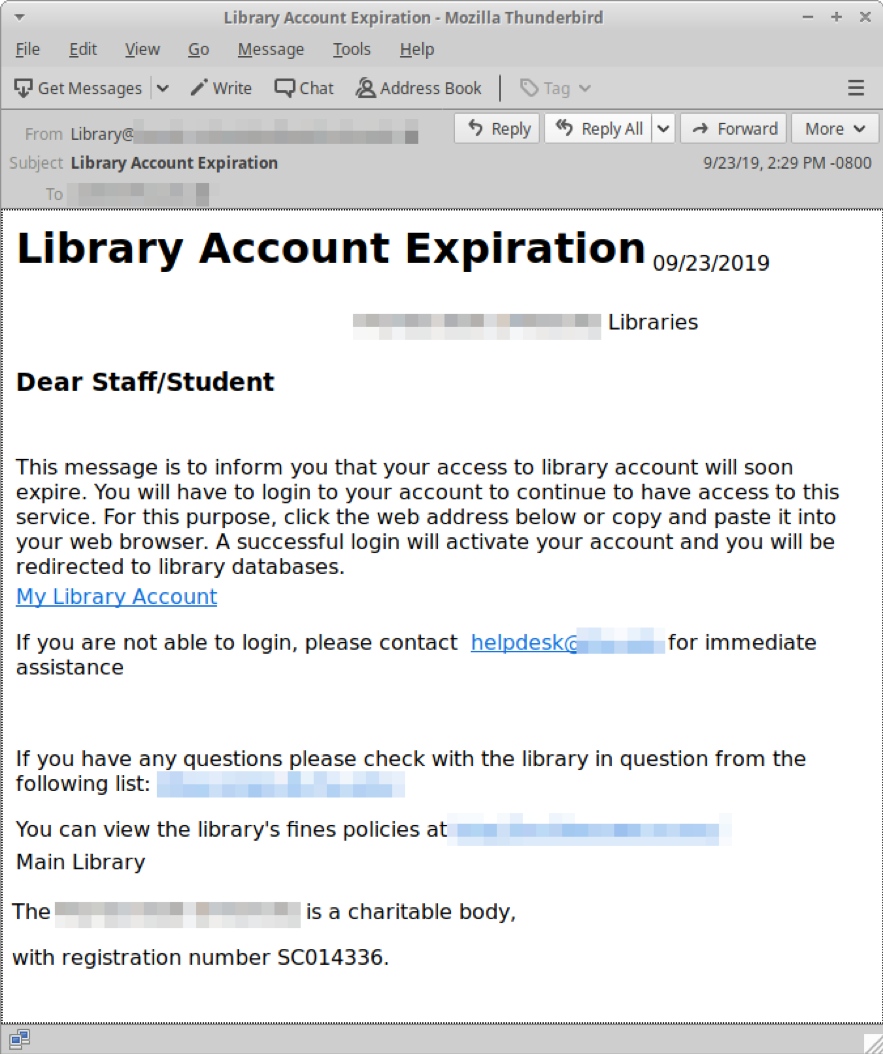 Figure 5: Basic lure verbiage by TA407. This style has been used for years.

In many examples, TA407 uses stolen branding from the university being targeted. In the following example, we have redacted the image of the signature block using the school logo that was used in the message body. 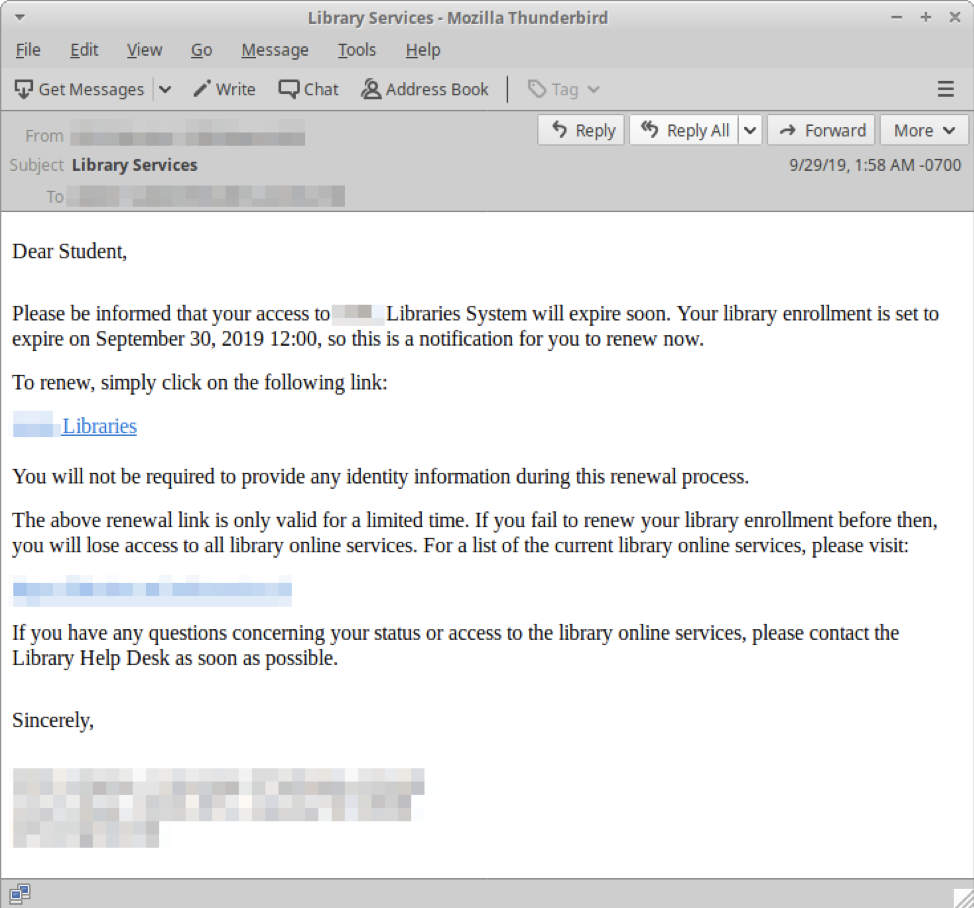 TA407 has demonstrated awareness of close to real-time changes in authentication portal traits, such as weather notification banners, that are sometimes reflected on the landing page clones used in their campaigns. The awareness manifests in both the lure wording and/or landing page appearance. However, Proofpoint researchers do occasionally observe what appears to be an outdated clone of a previous version of their target's portal, suggesting either inconsistent updates or coincidental timing of clone updates. 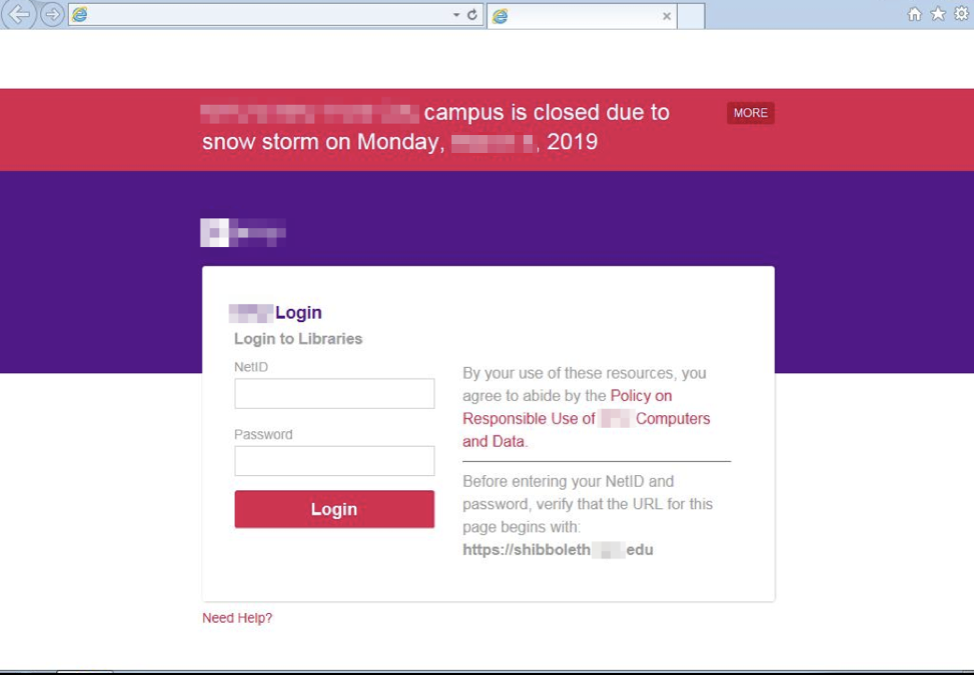 Last year’s DOJ indictments had no appreciable effect on curtailing the activities of TA407. Campaigns with the apparent intent to compromise user accounts at universities are ongoing with new Freenom domains appearing in September to host phishing pages. Most notably,

Appendix: List of OpenTLD and Freenom domains used by TA407 since January 2019