KovCoreG, a financially motivated threat actor active since at least 2011, made headlines recently when Proofpoint researchers uncovered a long-running malvertising campaign distributing Kovter ad fraud malware via social engineering. Kovter itself was developed by KovCoreG, first as ransomware and then reincarnated as an ad fraud powerhouse. This blog traces the activities of KovCoreG, also referred to as MaxTDS by FoxIT InTELL, from its early days distributing the Zaccess backdoor to its latest social engineering attacks. The history of KovCoreG in many ways parallels the history of web-based threats over the last several years. Analyzing the evolution of this actor and their techniques enables us to better understand the increasingly sophisticated techniques employed by crimeware threat actors, and, in particular, the general movement from reliance on automated exploits to the integration of social engineering to carry out infections. 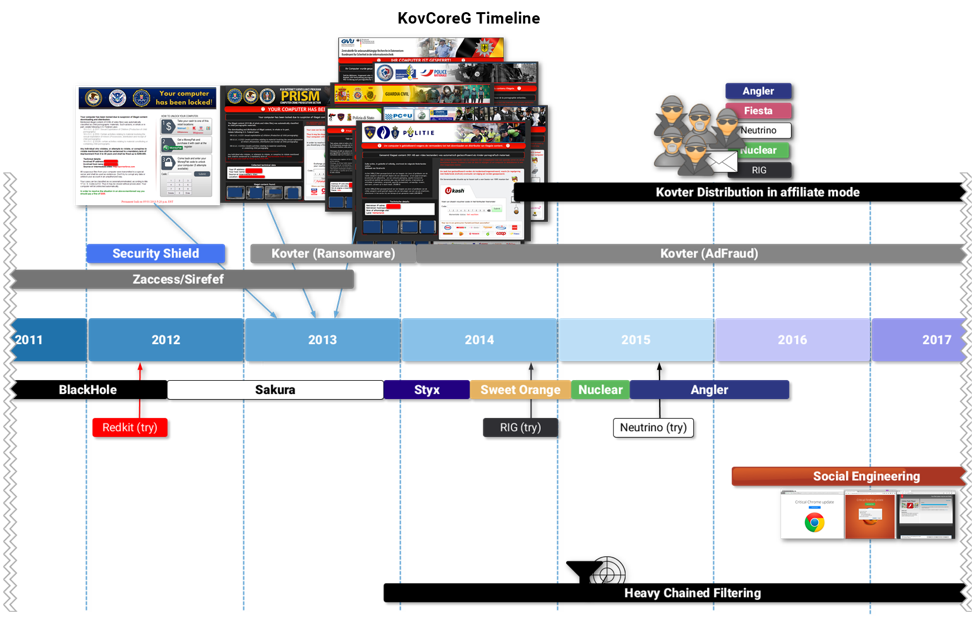 Figure 1 shows the evolution of KovCoreG operations. Although we can likely trace their activities back to 2010 or even earlier, we began our analysis at end of December 2011 when the connections among malware strains, campaigns, and KovCoreG became most concrete.

Zaccess, also known as ZeroAccess and Sirefef, is a backdoor Trojan used to load a variety of potential malware on Windows PCs. From at least the end of 2011 through mid-2013, KovCoreG distributed Zaccess via exploit kits (EKs) in large-scale malvertising campaigns. During much of this period, the group was also distributing SecurityShield, a fake antivirus application (“scareware”) that alerted users to nonexistent security threats and prompted them to pay for removal. KovCoreG also leveraged EKs and malvertising to install SecurityShield, setting the stage for distribution of their homegrown Kovter malware via similar vectors in the years to come. Figure 2 details KovCoreG activity related to Zaccess and SecurityShield in 2012 and 2013. 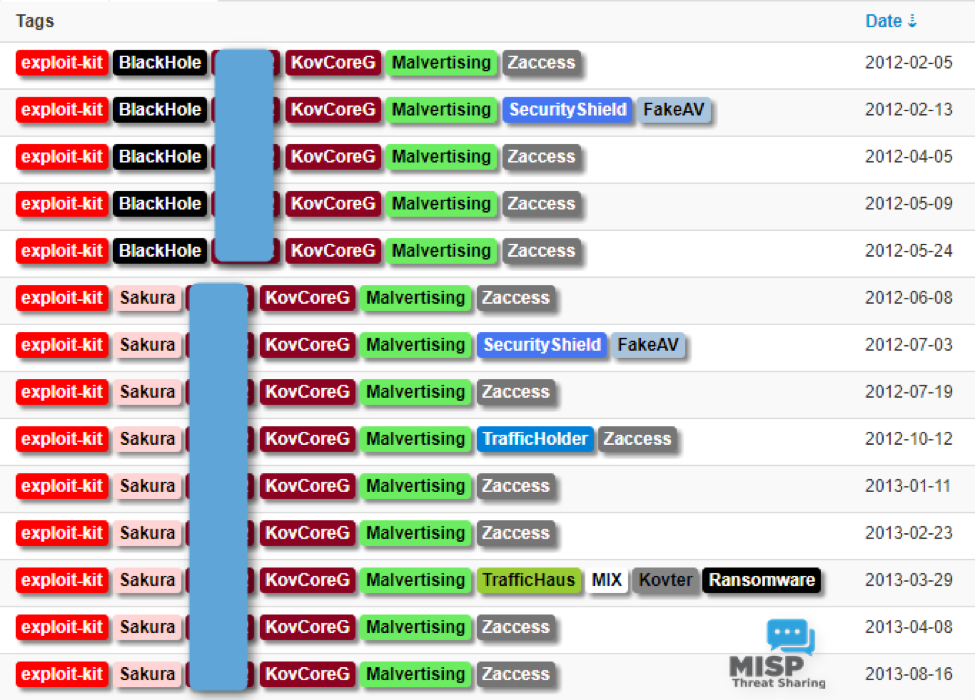 Figure 2: KovCoreG activity before the advent of Kovter malware

KovCoreG distributed SecurityShield as an affiliate, one of many actors involved in widespread scareware infections during this period. Figure 3 is a screenshot showing the application as it appears to end-users with infected PCs. 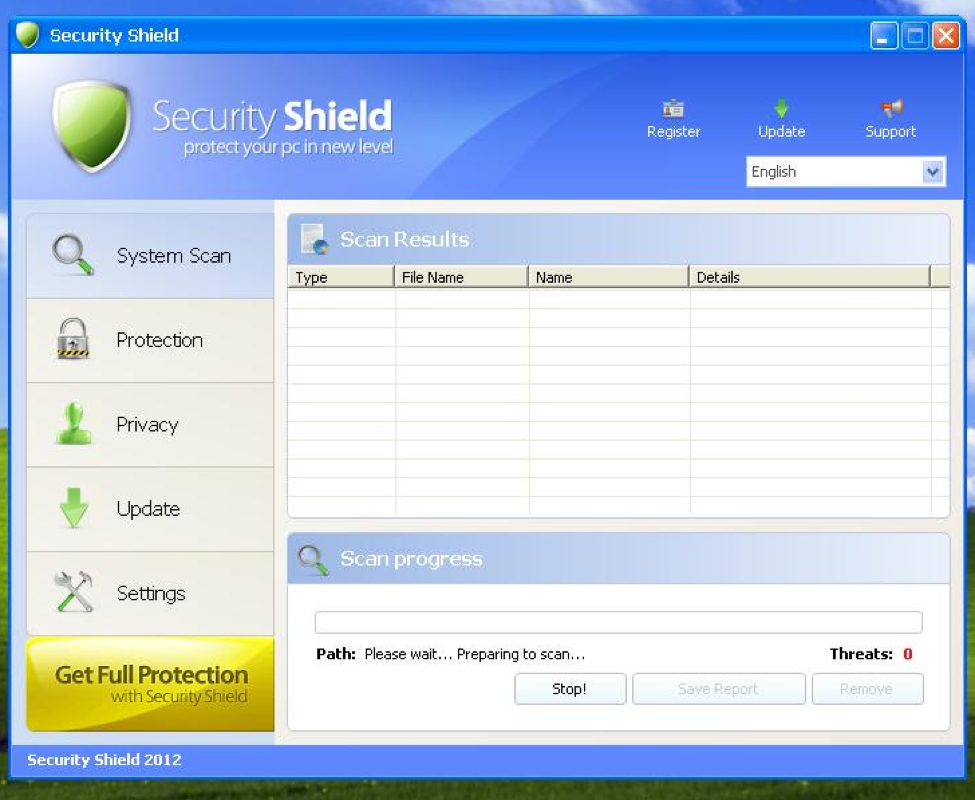 Between the end of 2011 and the first half of 2012 , KovCoreG’s infections occurred via the Blackhole exploit kit (Figure 4). In April 2012, KovCoreG appeared to test the Redkit EK but quickly returned to Blackhole. In June 2012, however, the group began using the Sakura EK in their malvertising campaigns, continuing through most of 2013.

Figure 5 shows an example infection chain from August 2012 in which KovCoreG used Sakura EK to distribute the Zaccess Trojan on adult websites.

The Advent of Kovter

KovCoreG is best known for development and distribution of Kovter malware. Initially developed as ransomware, the malware was later reengineered as ad fraud malware. Below, we trace the discovery and evolution of KovCoreG’s malware of choice, including the affiliate distribution we believe they control.

Figure 6 illustrates a selection of KovCoreG activity distributing Zaccess and Kovter ransomware, before exclusively spreading  Kovter as an ad fraud malware, via multiple exploit kits and social engineering schemes. The final instances of Zaccess distribution appear to coincide with the group’s transition of Kovter to ad fraud. 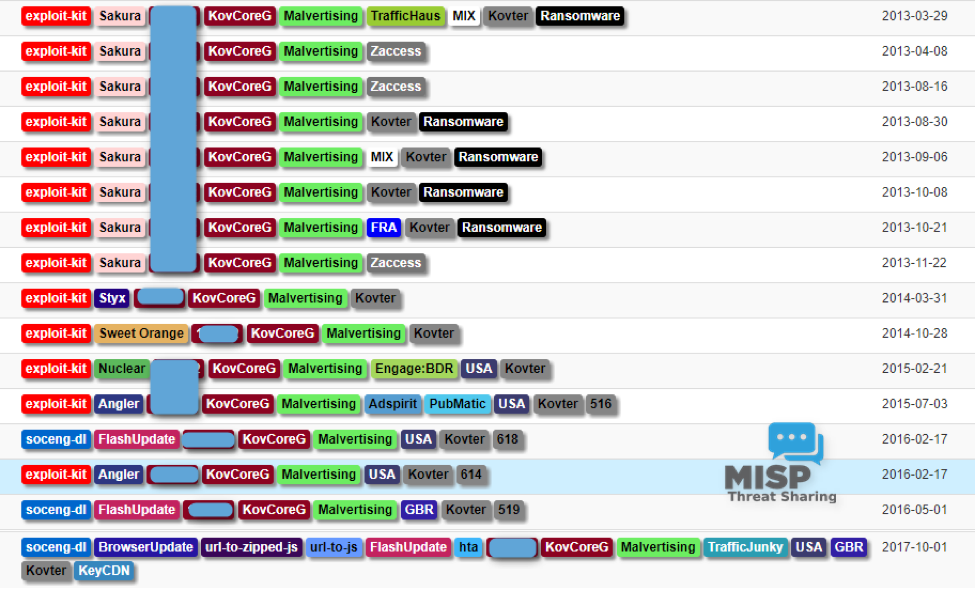 Figure 6: Illustration of some of the KovCoreG activity in the Kovter Era

On March 29, 2013, Kovter ransomware was observed in a live infection chain via the Sakura EK. 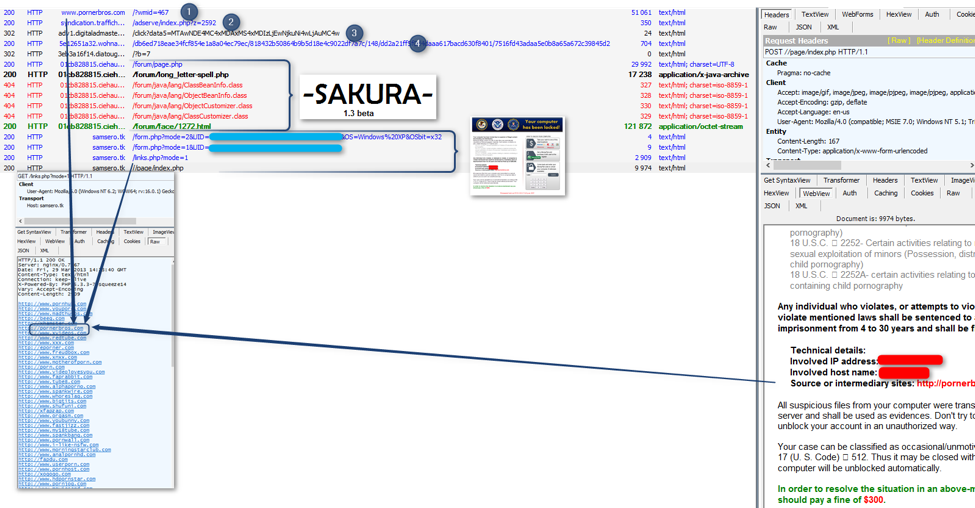 Figure 8 shows another infection chain in which KovCoreG leverages the Sakura EK:

In August 2013, KovCoreG distributed a “PRISM-themed” version of Kovter ransomware. The version used social engineering to convince victims that they may face prosecution for “illegal content” on their computers if they did not pay to resolve the bogus charge. The infection chain and a screenshot of the ransom message appear in Figures 9 and 10, respectively. 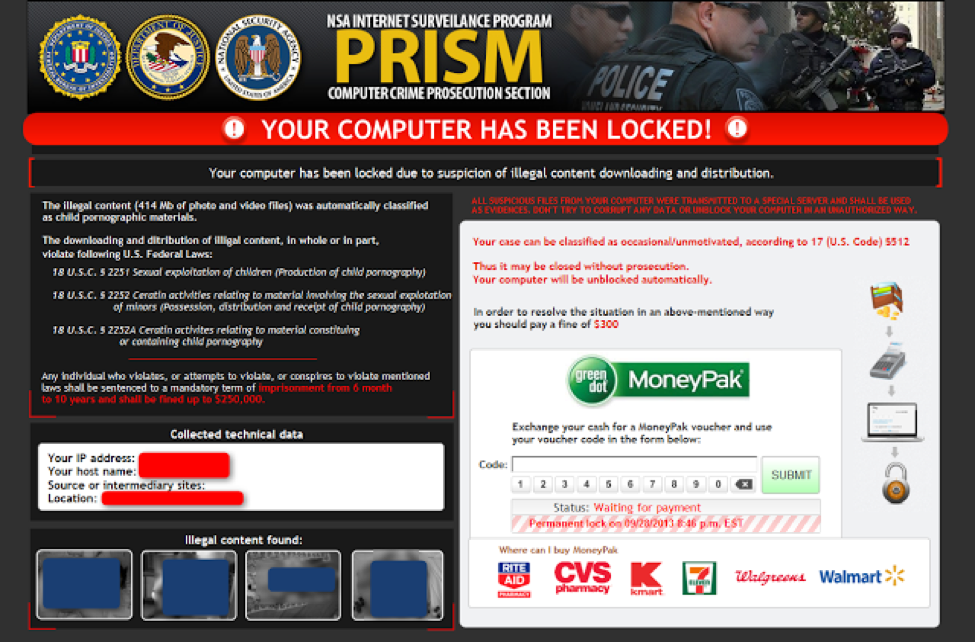 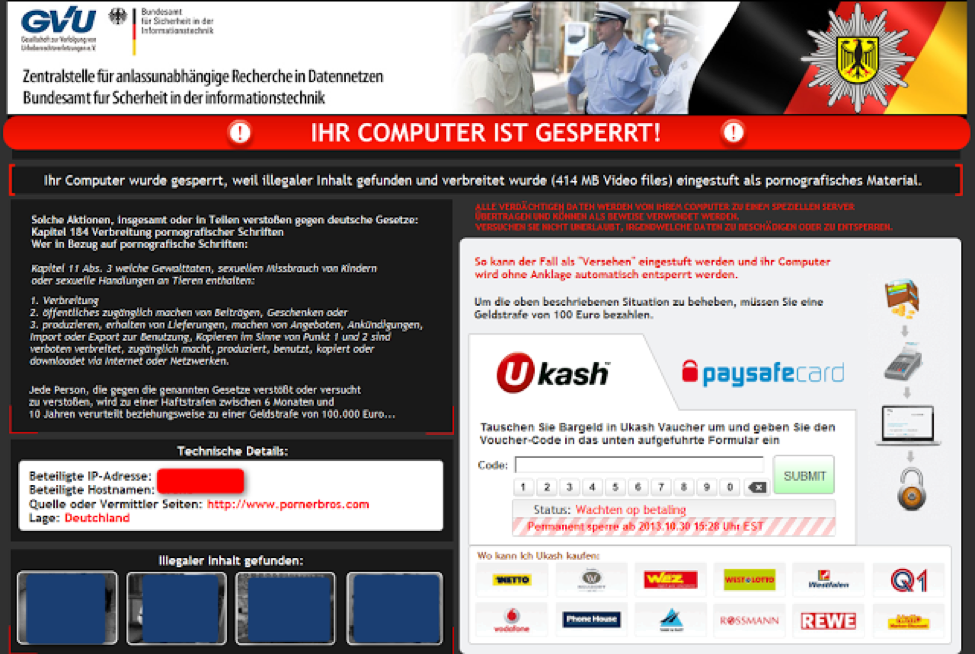 To our knowledge, KovCoreG was the last user of Sakura, extending their use of the EK for several weeks beyond that of any other customers. Figure 12 shows the last recorded Sakura pass.

End of 2013: Infection chain filtering and transition to ad fraud

At the end of 2013, the group began adding significant filtering and implemented a multistep infection chain. This helped them avoid repeated reports to ad agencies and reputation services that forced them to rebuilt accounts, proxies, etc., The approach proved highly effective, allowing KovCoreG to stay globally below the radar and reach high volumes with quality traffic [4][5][6][7][8]. It also became increasingly difficult to obtain a full infection chain replay.

In March 2014, KovCoreG began using the Styx EK, an infection chain an example of which is shown in Figure 13:

Figure 13: KovCoreG chain into Styx dropping Kovter which, at this point, had been converted to ad fraud malware, March 2014.

By the end of March 2014, Kovter migrated from ransomware to ad fraud malware; Kovter continues today as part of a sophisticated ad fraud scheme.

In October 2014, the group also briefly used RIG EK to distribute Kovter, but quickly turned back to Sweet Orange, which they continued to use until early 2015 when they switched to Nuclear EK.

In December 2014, Kovter was detected appearing in other infection chains involving different actors and vectors. It appeared that the malware was being distributed in affiliate mode, with all affiliate IDs (affids) in the 8xx range associated with other actors and 5xx and 6xx affids operated by KovCoreG itself.. Figure 15 shows nearly three years of activity following the move to an affiliate or pyramid model. It appears that KovCoreG controls this model with all other actors distributing Kovter downstream from KovCoreG. 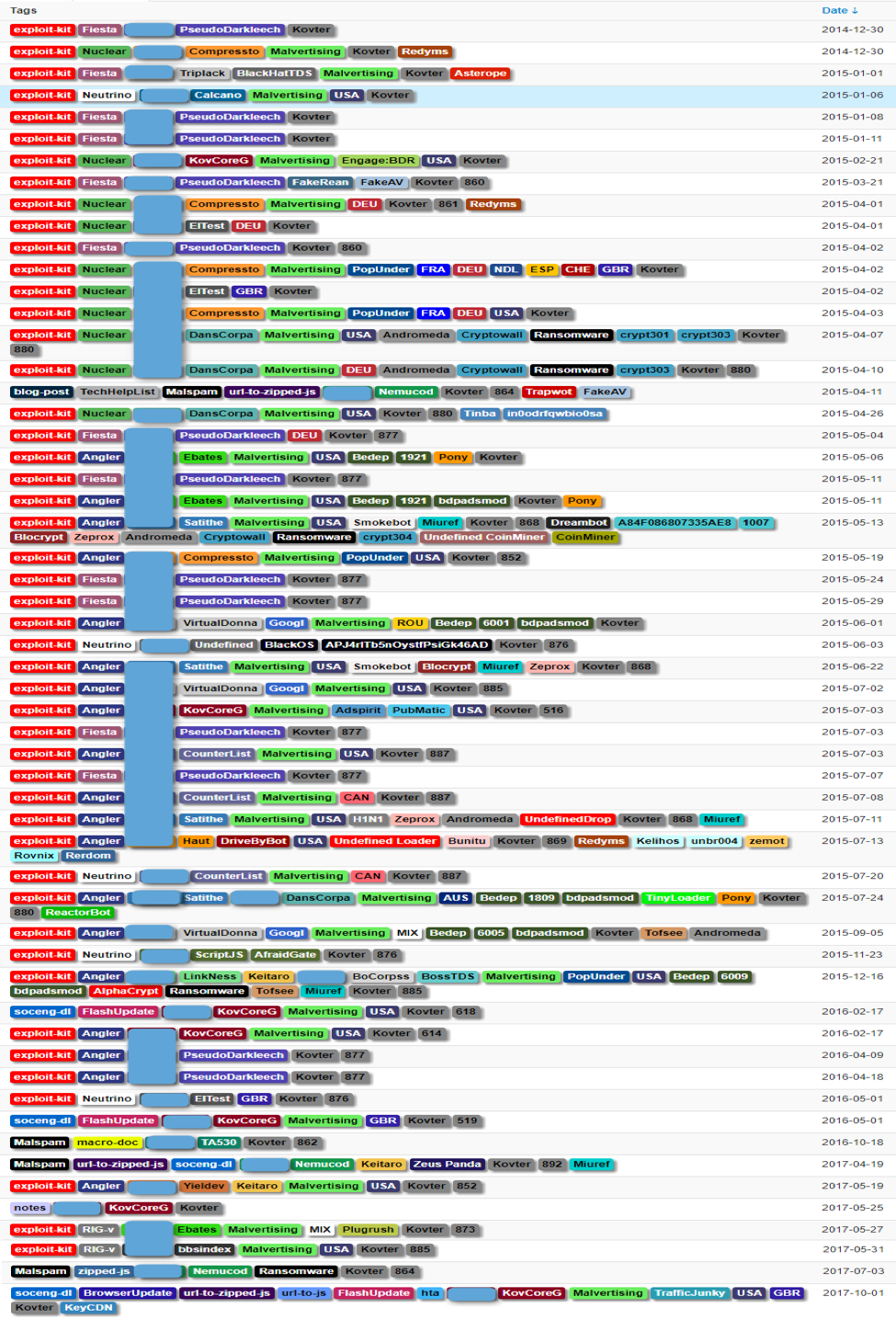 Figure 16: Selected websites compromised by “Pseudo-Darkleech” that redirect to Fiesta EK, dropping Kovter instead of Miuref, another ad fraud Trojan previously associated with this chain, December 30, 2014

Figure 17: Kovter and Redyms Spread via Nuclear Pack by another actor, December 30, 2014

Figure 19: Kovter spread via Fiesta by another group than KovCoreG, April 2, 2015

Figure 20: Kovter spread via Nuclear Pack by another group than KovCoreG, April 2, 2015

Figure 21: Kovter spread along with Andromeda (not shown here but later grabbing Cryptowall 303) via Nuclear Pack from a fifth different driveby actor, April 7, 2015.

The threat actor TA548 (aka “Nemucod”)  are also integrating it as one of their payloads in spam campaigns [13]. The actor TA530 spread Kovter heavily in October 2016, also via malicious spam campaigns. [15]

KovCoreG relies heavily on malvertising to distribute Kovter. Figure 22 shows a complete malvertising chain abusing the Engage:BDR network and using an instance of the Nuclear Pack EK in February 2015.

In mid-2015, KovCoreG transitioned to Angler EK for their malvertising operations. Figure 23 shows one such malvertising chain, again dropping Kovter.

In July, the group used Neutrino EK for several days. Snapshots of their driveby activity statistics for two of these days provide significant insight into the reach of these campaigns. The statistics for the captured Neutrino threads can be found in Appendix A. These four sets of snapshots, taken 24 hours apart on July 19 and 20, 2015, show not only a strong focus on the US, Canada, and Great Britain, but also the accumulation of more than 20,000 infections over this 24-hour period.Notably, these statistics are only for Kovter distribution operated by KovCoreG; affiliate infections are not counted in these snapshots. 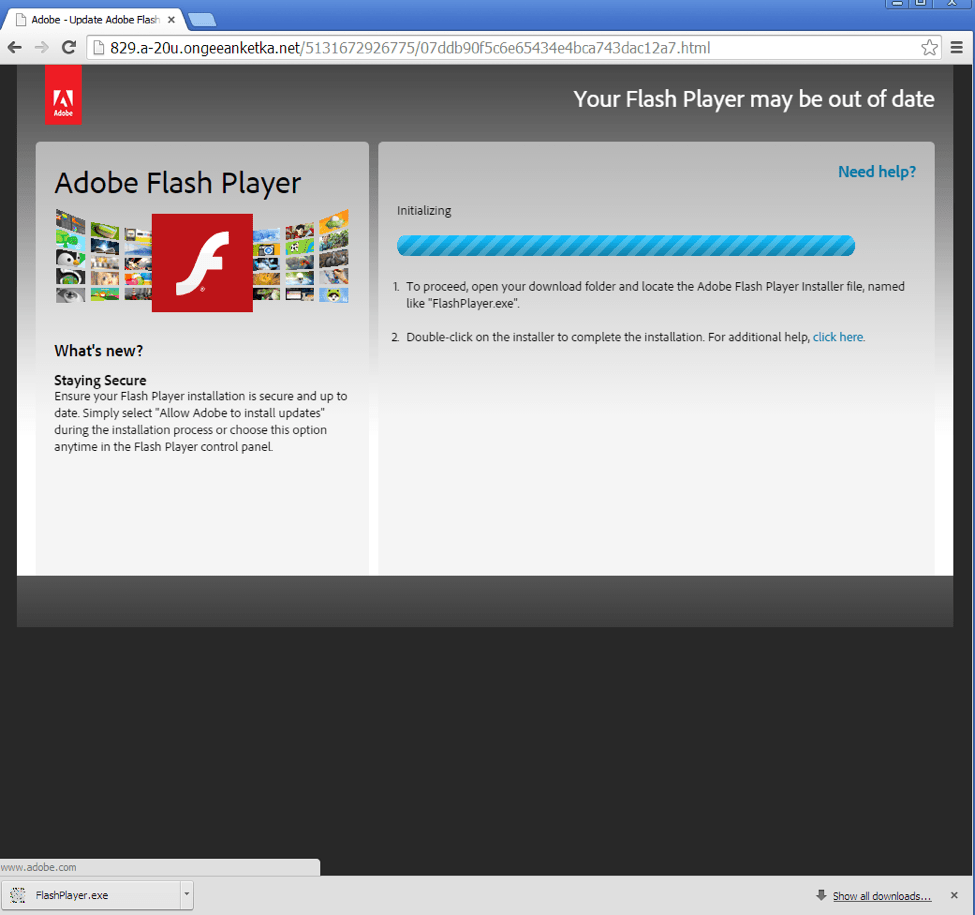 In parallel with this activity, KovCoreG was also still targeting Internet Explorer users with Angler EK: 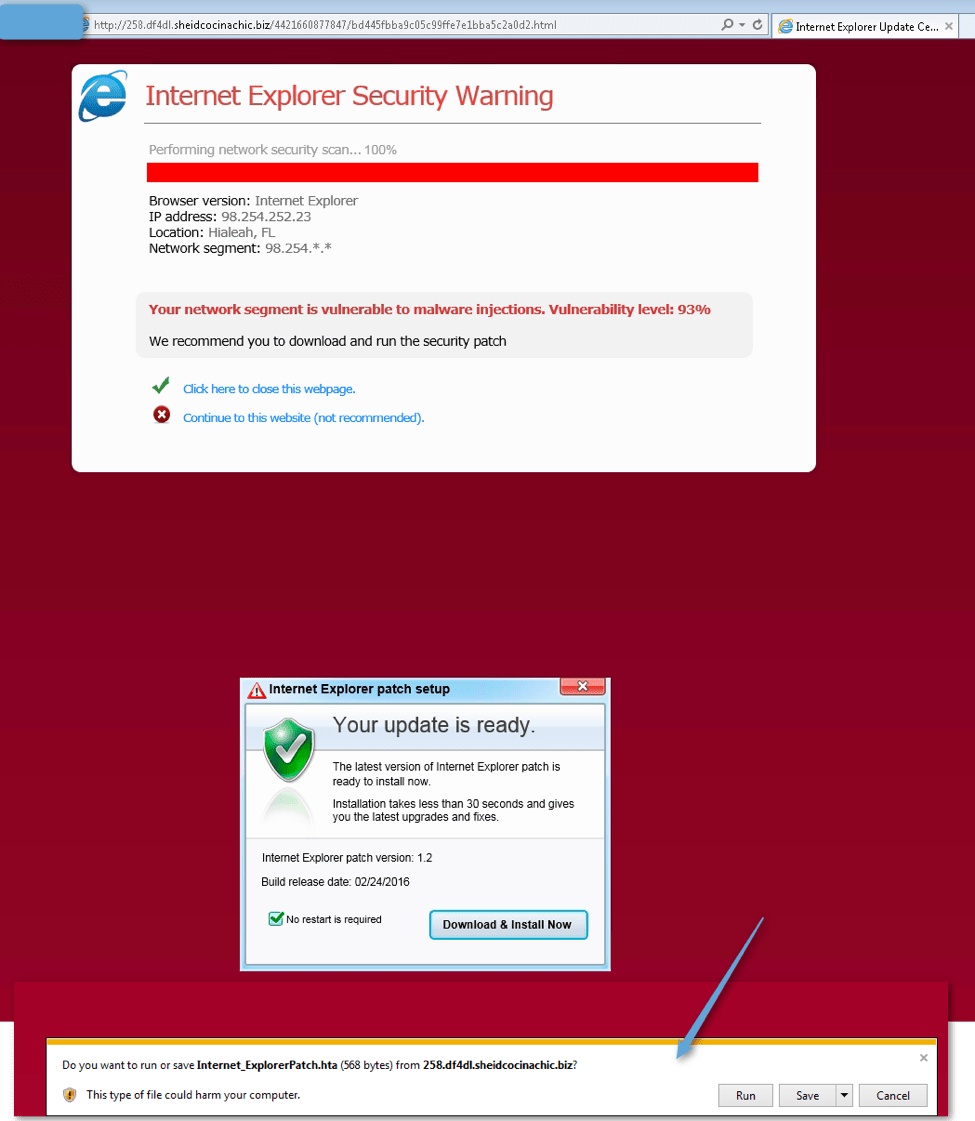 KovCoreG has continued extensive malvertising campaigns in 2017, using a variety of stolen branding over the last year, a selection of which is shown in Figure 28: 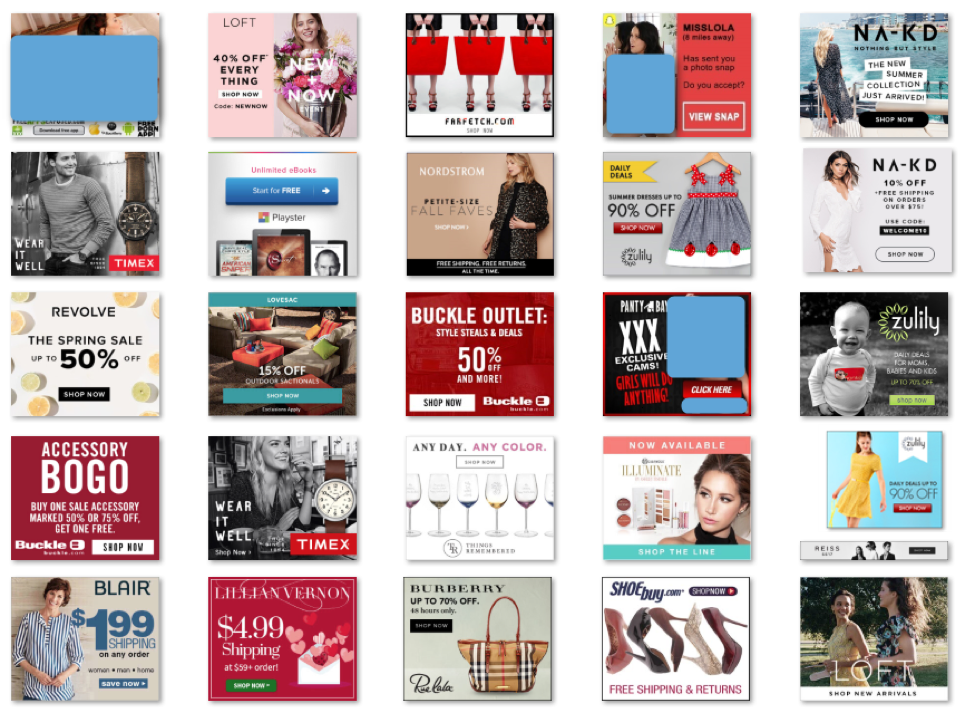 KovCoreG demonstrates how a financially motivated actor can adapt, evolve, and innovate over several years, influencing the threat landscape while remaining effective and viable as they fly under the radar of law enforcement, the sites and ad networks they abuse, and end users. KovCoreG also provides a window into the ways in which affiliate models can grow, increasing the footprint of a particular threat while spreading the risk for a single threat actor. KovCoreG has been at the forefront of malvertising, exploit kit usage, and, as EKs declined, social engineering, while distributing lucrative malware through multiple vectors. Through their relatively long history, the group has adapted to the shifting popularity of scareware, “police locker” ransomware, exploit kits, and, for the last few years, taken advantage of the massive scale and automation of online advertising. We will continue to follow this actor and the affiliates distributing Kovter to see what comes next - and how best to defend against it.

Frank Ruiz from FoxIT InTELL for his invaluable and long-running assistance in the ongoing study of KovCoreG.

The loads in the following screen captures refer to the number of infections; the group’s filtering ensures that the infections are unique. 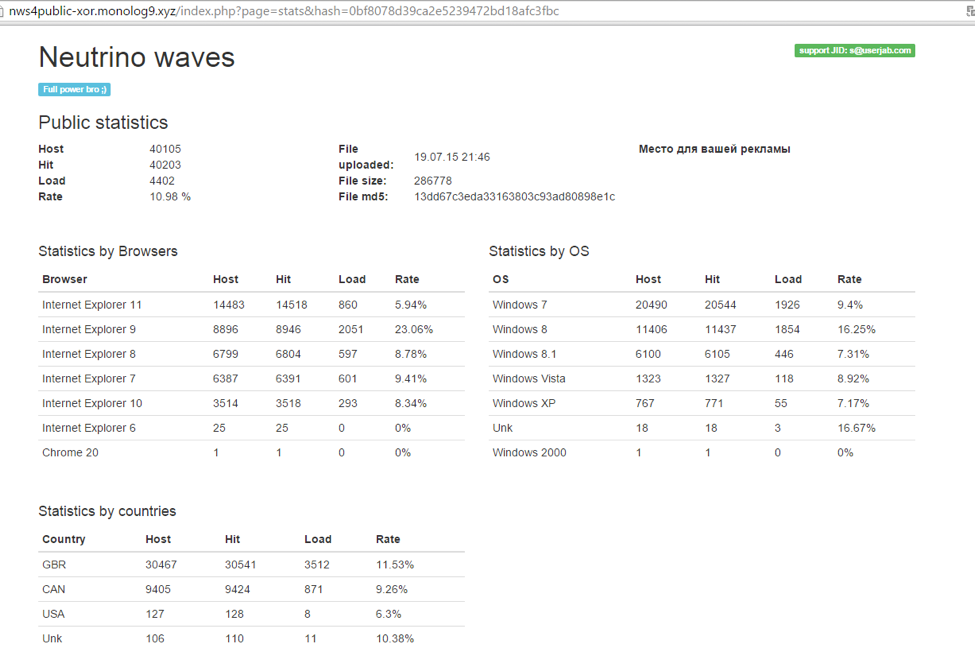 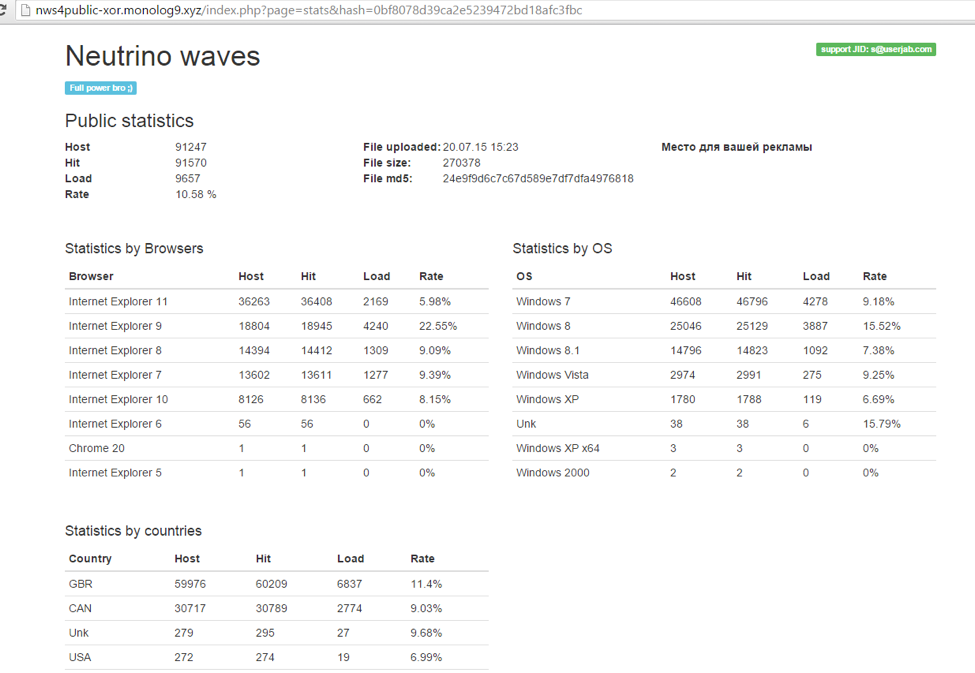 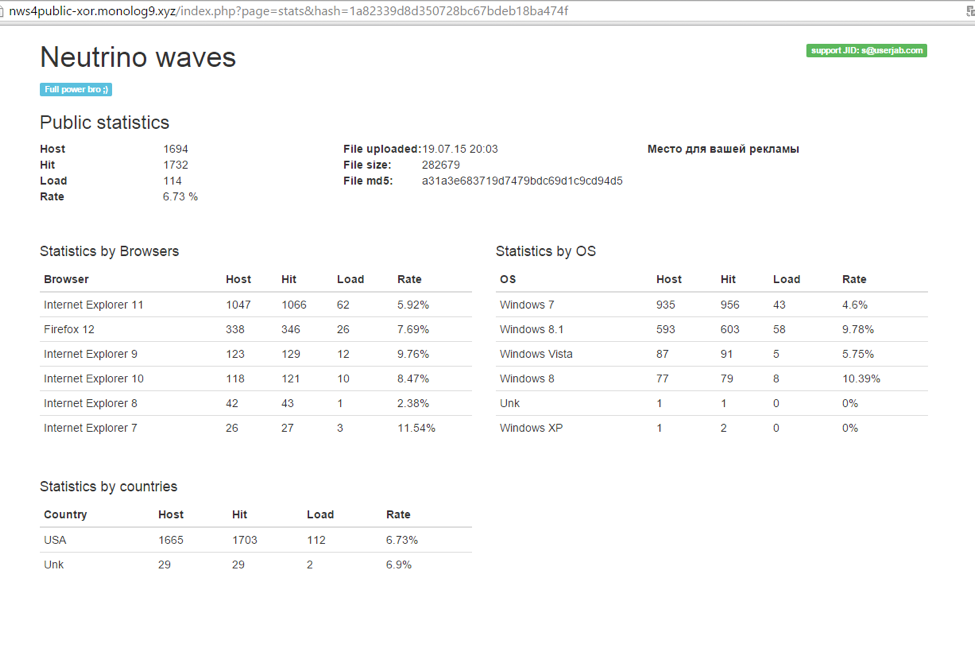 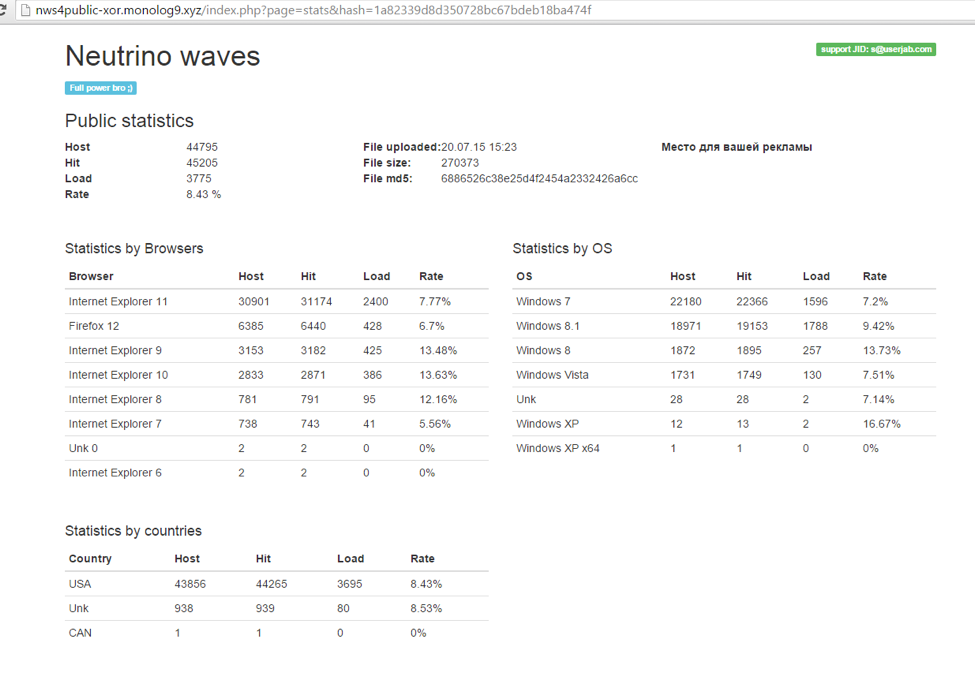 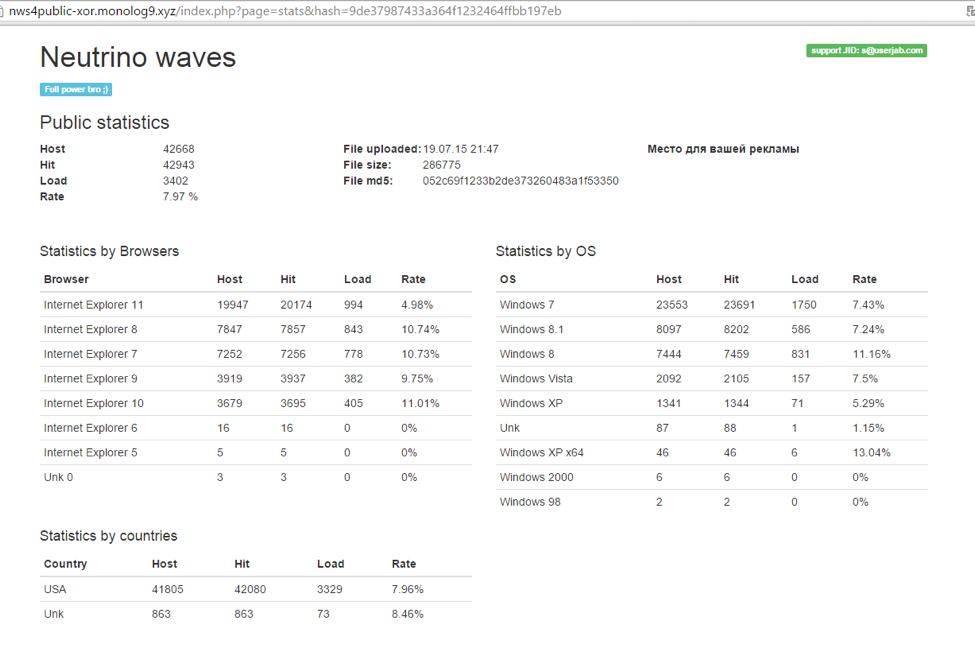 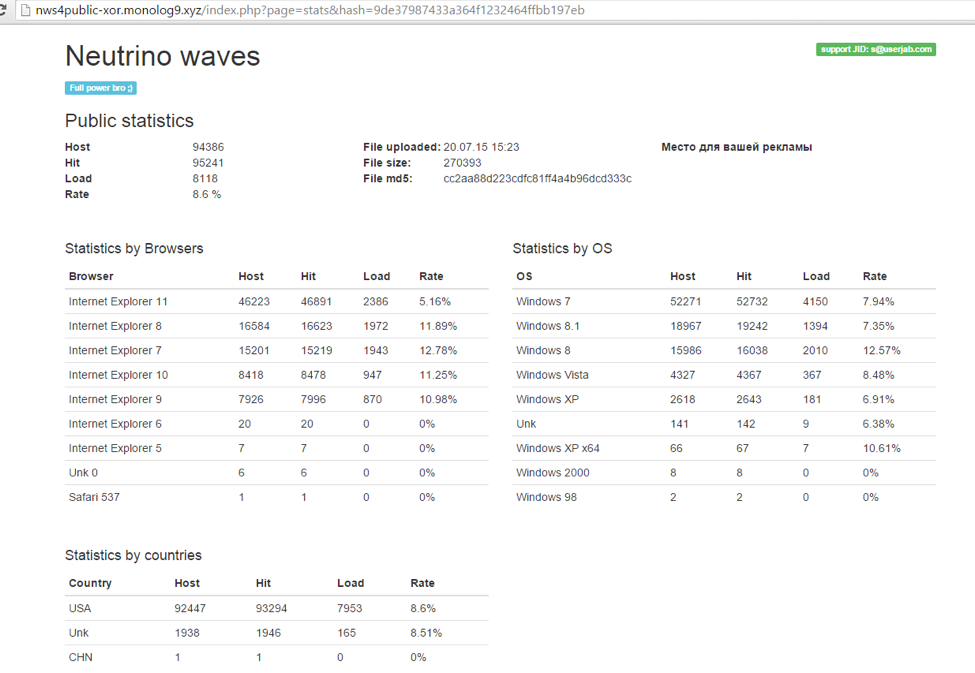 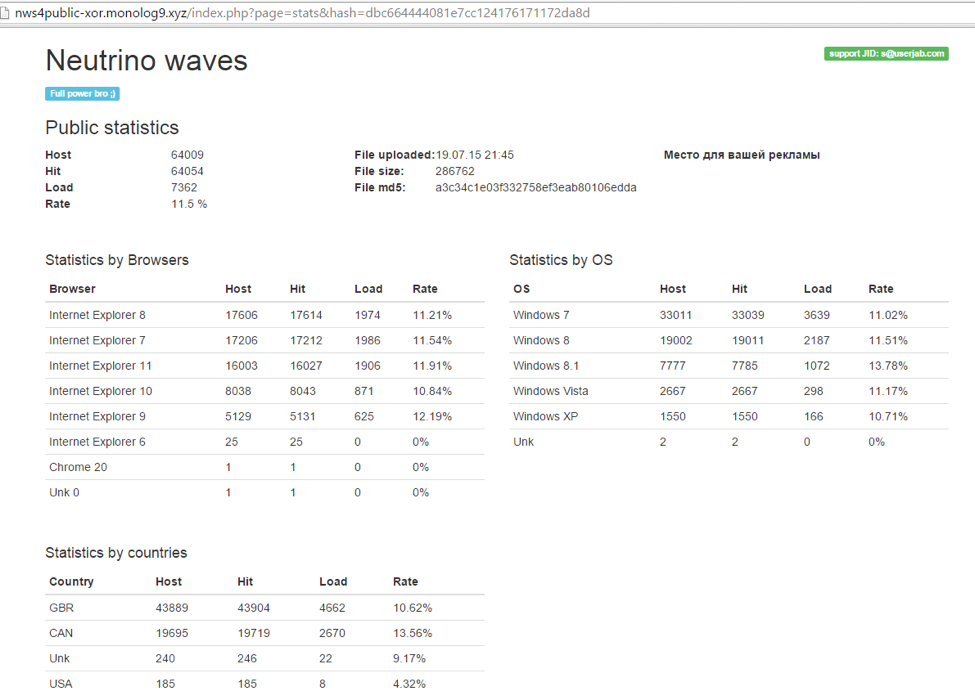 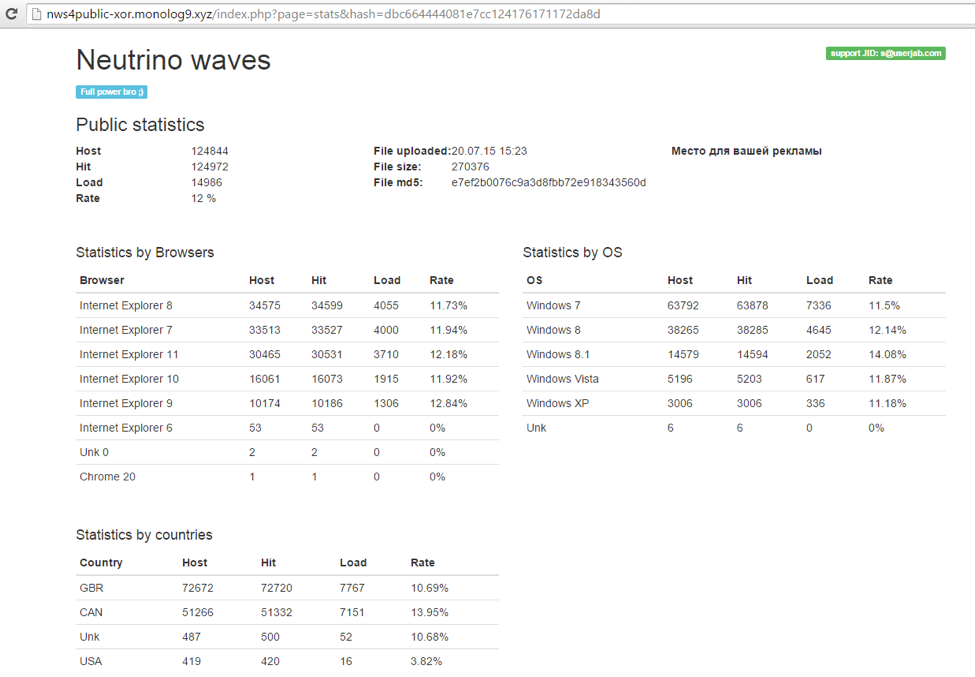