May 15, 2019 Axel F and the Proofpoint Threat Insight Team

Update: Table 1 was updated to reflect a Poland-targeted Emotet campaign discovered on the day of publication. This is the first campaign targeting the region since 2017.

Proofpoint researchers began tracking a prolific actor (referred to as TA542) in 2014 when reports first emerged about the appearance of the group’s signature payload, Emotet (aka Geodo) [1][2]. TA542 consistently uses the latest version of this malware, launching widespread email campaigns on an international scale that affect North America, Central America, South America, Europe, Asia, and Australia.

Earlier versions of Emotet had a module that was used to commit banking fraud, specifically targeting German, Austrian, and Swiss banks [7], and for years, the malware was widely classified as a banking Trojan. However, later versions of Emotet no longer loaded its own banking module, and instead loaded third party banking malware. More recently, we have observed Emotet delivering third-party payloads such as Qbot, The Trick, IcedID, and Gootkit. Additionally, Emotet loads its modules for spamming, credential stealing, email harvesting, and spreading on local networks.

TA542 typically distributes high volume email campaigns consisting of hundreds of thousands or even millions of messages targeting all industries. TA542 is currently one of the most prolific actors in the entire threat landscape. With TA542’s international reach and high volume campaign strategy, we expect Emotet use to continue to grow in the upcoming quarters. 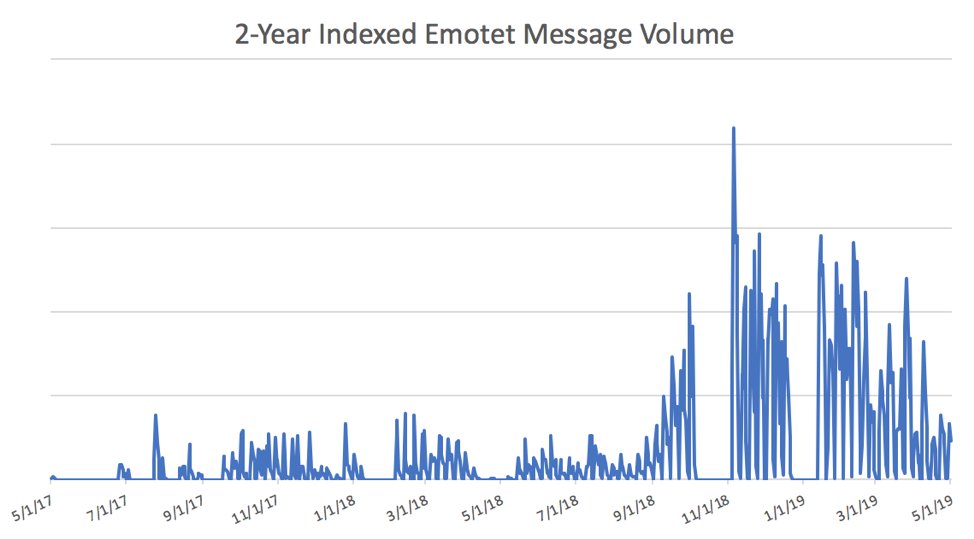 Version 1 of Emotet originated around May 2014 as a banking Trojan, which at first was only known to load its own banking module targeting German and Austrian banks [1][2].

Version 2 was detected in fall 2014, when it began using the Automatic Transfer System (ATS), and had a modular structure with a spamming module, banking module, DDoS module, and address book stealing module [7].

Version 4 was initially observed around December 1, 2016, spreading via the RIG 4.0 exploit kit [9]. Proofpoint researchers next observed it spreading via emails with links to zipped executables or JScript in February 2017. Starting in April 2017, TA542 began consistently distributing this version in high-volume campaigns. This version does not use its own banking module, but primarily loads other modules and third-party banking malware.

Since its introduction, Emotet has used a number of modules:

Main module: Downloads other modules from a command and control (C&C) server.

Spam module: This module has been present in most versions of Emotet. The spam module facilitates the continued spread of the Emotet botnet by sending out emails with links or attachments that lead to Emotet. “Distribution is performed using previously scraped mail accounts, which are sent to each spambot” from the C&C [8].

Credential stealing: This module has been present in most versions of Emotet. In version 4, it steals credentials from web browsers and mail clients, using NirSoft tools Mail PassView and WebBrowser PassView [8].

Spreader module: The network spreader module, introduced in September 2017, enumerates network resources. It attempts to connect to them “as the currently logged on user before jumping into the bruting portion of the code.” [10] The brute force attack happens by enumerating available logins and attempting passwords from a hardcoded list. For every successful login, a file is copied into the new network folder. A service is configured on the remote system to execute the file.

Email harvesting: This module was introduced in October 2018. It exfiltrates email content from the infected machines to the C&C. Specifically targeted components of email include the email subject, body, the name of the sender and the receiver, along with his or her corresponding email address. This information is only stolen for emails sent/received in the last 180 days. “If the body is longer than 16384 characters, it is truncated to this size plus the string ...” [6].

Address book stealer: This module, first seen in 2017, performs a relationship analysis between sender and recipient in the current user’s Outlook data file. It extracts the name and address list from each profile’s address book and then undergoes a recursive scan on each email stored in the data file. Information about each sender and recipient is extracted, which is then used to make inferences about the relationship and refine its targeting, that is then passed to the spam module. [11]

DDoS module: No longer active, a module from early versions of Emotet [7].

Banking module: No longer active, a module from early versions of Emotet [7].

As with many threat actors monitored by Proofpoint researchers, TA542 leverages social engineering mechanisms to increase infection rates. They frequently use stolen branding and urgent subject lines in order to deceive potential victims. They also compose emails in the appropriate language for the targeted country. TA542 uses a variety of social engineering mechanisms and strategies, but the most common are described below.

Often, the body of the message is simple, and consists of only a few sentences. Email bodies usually include brief verbiage about missed or upcoming payments, incoming financial statements, or invoices. However, Proofpoint researchers have observed more sophisticated examples in which TA542 included stolen company branding.

Thread hijacking is a technique in which threat actors reply to existing benign email conversations with a malicious attachment or URL. Since early April 2019, TA542 began to consistently utilize this technique to distribute Emotet, sending what appear to be replies to legitimate emails [4][5]. While the technique is not novel or original, it is still effective because as victims have seen these email chains before, they may believe that they are interacting with a person they trust, making them more inclined to open attachments and links in the message body.

The appearance of thread hijacking followed reports of a new module that can steal emails from the victim’s machines in October 2018 [5].

TA542 abuses the branding of dozens of high-profile companies, including them in the body of the email, Microsoft Word document attachments, PDF attachments, and in the malicious URL paths. Commonly abused brands include shipping companies (such as DHL and UPS), telecommunication companies (such as T-Mobile and O2), large financial institutions (such as TD Bank, Barclays, and RBC) and others.

Table 1: Description of the countries with observed Emotet email campaigns. Note that this list is not considered exhaustive.

This section highlights email lures from some of the more notable TA542 campaigns.

The figure below shows the following email messages: 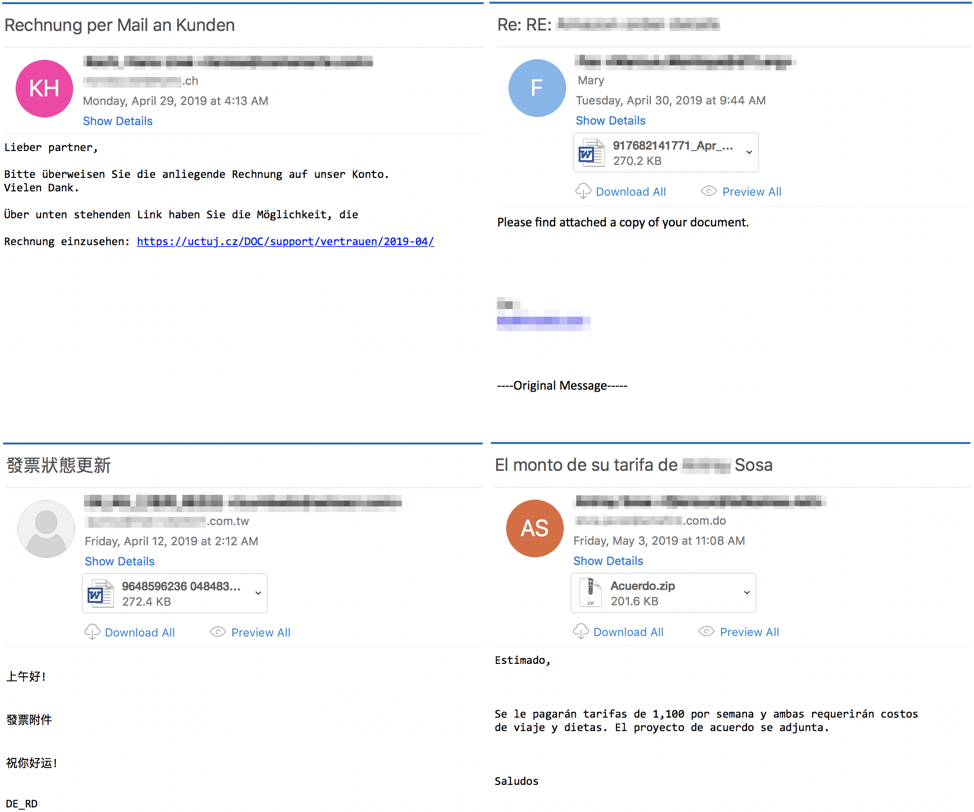 The example emails below show the seasonal customization used in the days leading up to Christmas and Black Friday in 2018: 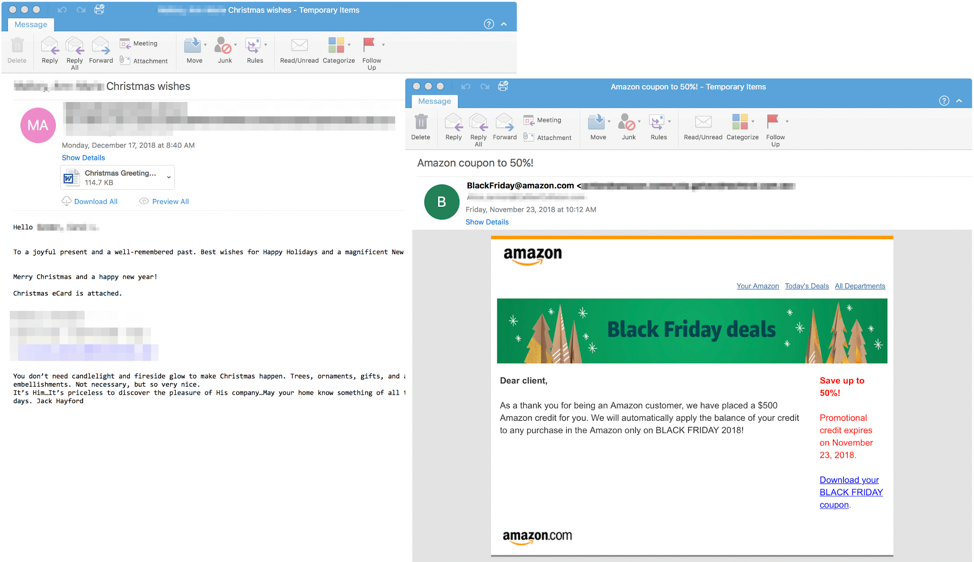 The malicious content included in the emails sent by this threat actor is generally either a URL or an attachment, although Proofpoint researchers have observed some instances in which both were included at the same time. The actor maintains a diverse arsenal of attachments and URLs in order to vary their attacks. TA542 frequently uses some formats, such as attached Microsoft Word documents with macros and URLs linking to similar documents. The actor uses other formats such as PDFs and JScript intermittently. Finally, formats such as password-protected Zip files containing Microsoft Word documents appear to be experimental and it remains to be seen if they will be adopted for broader use.

The following is a list of known types of email attachments used by TA542. All types of attachments are first-stage downloaders that attempt to download the Emotet payload or another intermediary downloader, as in the case of PDFs, from one of several (typically five) hardcoded payload URLs. Many unique attachments can contain the same set of payload URLs. TA542 also exchanges the URL sets several times a day.

The following is a list of known types of URLs that the actor embeds in the emails. The URLs are frequently hosted on compromised vulnerable sites, including vulnerable  WordPress installations. The actor typically adds a nested structure of one or more folders on the compromised site and hosts a malicious PHP script that initiates the download of the payload. The folder names are sometimes synchronized with the rest of the campaign theme, and might use stolen branding. 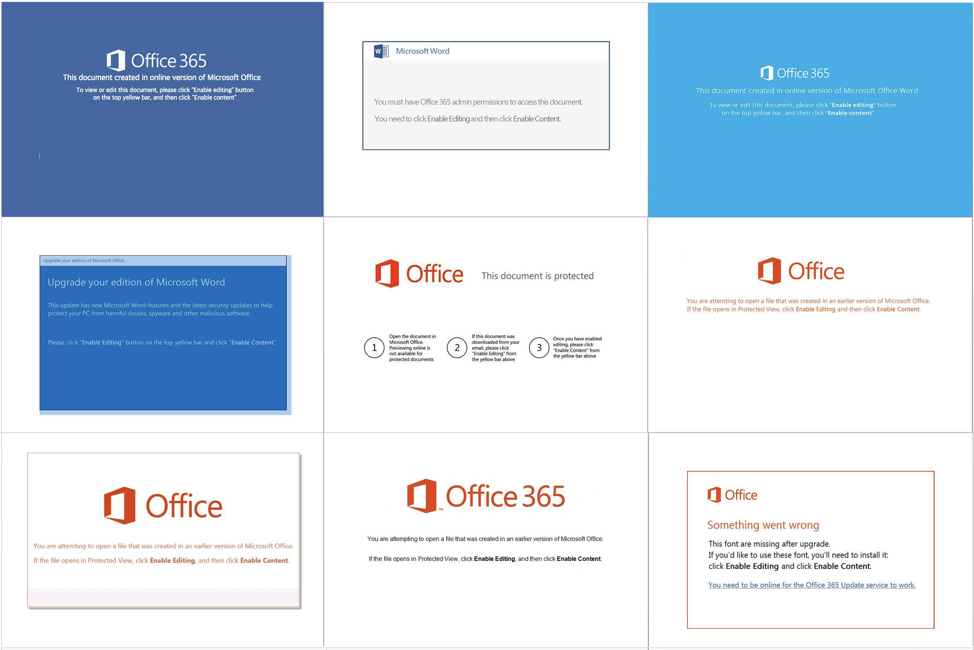 Figure 5: TA542 most commonly uses Microsoft Word documents with macros. The actor periodically updates the visual lure used in the document. This collage shows many of the lures used. 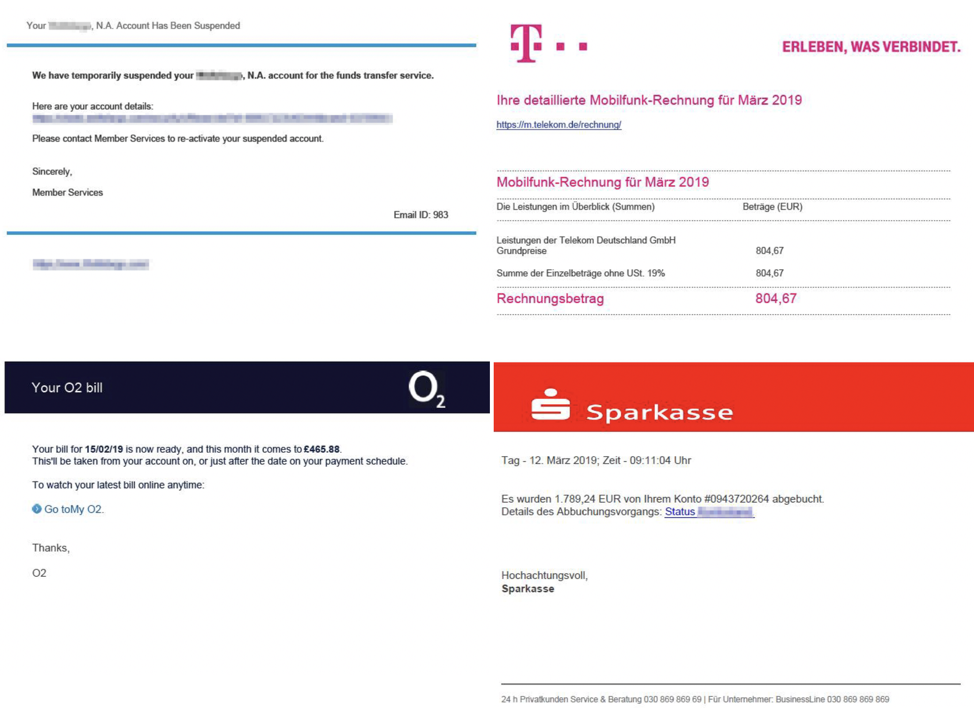 In the last two years, TA542 has become one of the most prolific threat actors in the overall threat landscape. Leveraging a robust Botnet known as Emotet, TA542 orchestrates high-volume, international email campaigns that distribute hundreds of thousands or even millions of messages per day. They use Emotet to download third-party banking malware such as The Trick, IcedID, and Gootkit, and to facilitate the continued spread of their botnet via a number of modules. As TA542 continues to operate at near-global scale, we can expect Emotet use to grow in the upcoming quarters.