DanaBot Gains Popularity and Targets US Organizations in Large Campaigns

Proofpoint researchers first discovered DanaBot in May of 2018 [1], describing its use by a single actor targeting Australian organizations. As we predicted at the time, other threat actors targeting Europe and North America have since adopted the banking Trojan, increasing its footprint and taking advantage of its extensive anti-analysis features. In this blog we describe a campaign affecting organizations in the United States and present new reverse engineering analysis of DanaBot.

Our colleagues at ESET recently blogged about DanaBot campaigns and described the latest expansion of targeted countries to include Poland, Italy, Germany, and Austria [2]. We have also observed several campaigns since May targeting Australia. Finally, at the end of September, an actor that typically targets the United States with daily campaigns distributing the Panda banking Trojan switched to delivering DanaBot for a day.

On September 26, Proofpoint researchers observed a campaign with hundreds of thousands of email messages targeting US recipients. The emails used an eFax lure (Figure 1) and contained a URL linking to the download of a document containing malicious macros (Figure 2). The macros, if enabled by the user, executed the embedded Hancitor malware [3], which, in turn, received tasks to download two versions of Pony stealer and the DanaBot banking malware. You can find a more in-depth analysis of the recent macros used by this actor in a post written by 0verfl0w [4]. 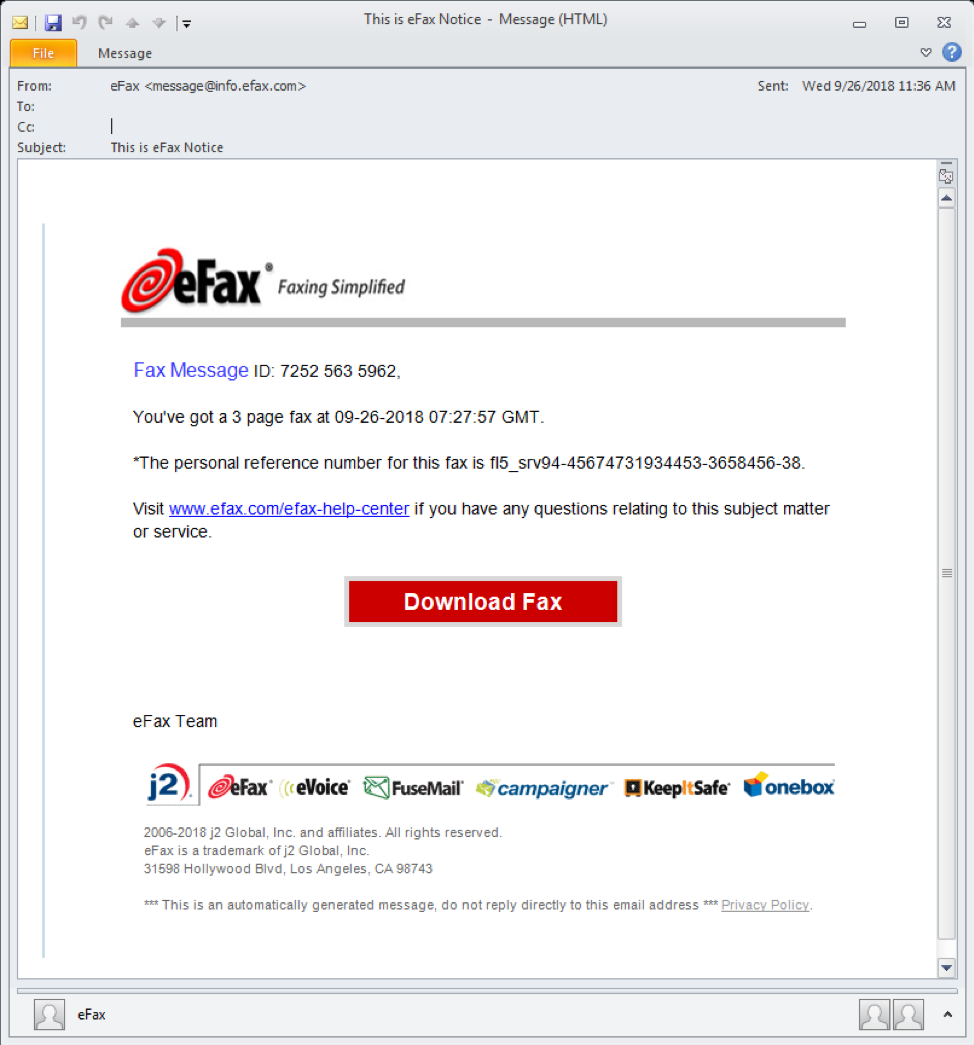 Figure 1: Message example with URLs linking to the download of a document containing macros that download the Hancitor payload 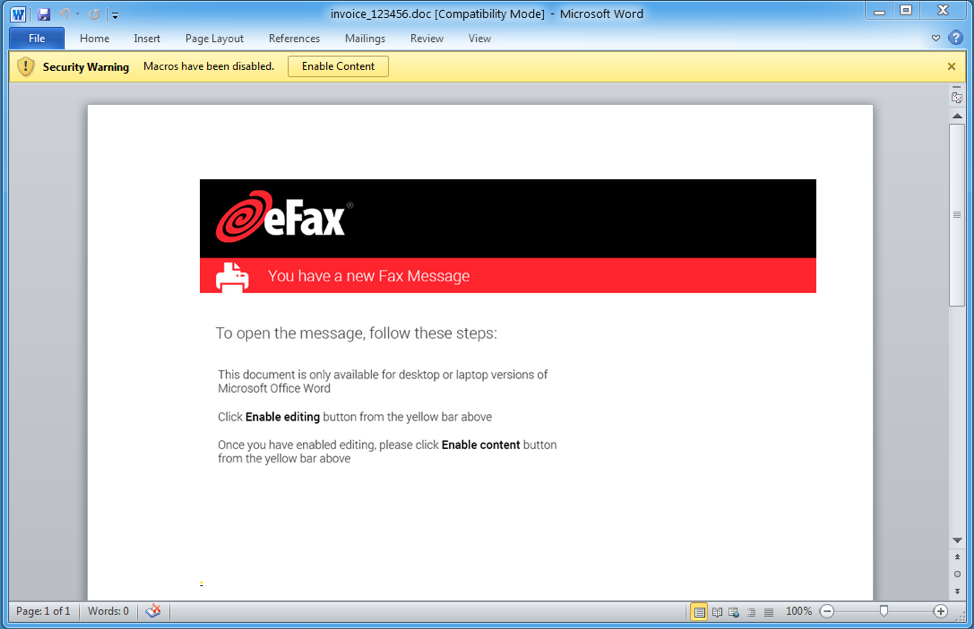 As previously described, DanaBot is a banking malware written in the Delphi programming language. This section continues our analysis of DanaBot by examining details of version 2.003. This is the latest version that we have seen in the wild, first appearing in early September. The version number is based on a version string (Figure 3) that is sometimes transmitted when the malware sends data to the command and control (C&C) server.

Figure 3: DanaBot’s version string being sent to the C&C server along with system information

DanaBot is composed of three components:

DanaBot includes a significant amount of junk code including extra instructions, conditional statements, and loops. When combined with the use of Delphi, these features dramatically impair reverse engineering. In addition, DanaBot uses Windows API function hashing and encrypted strings to prevent analysts and automated tools from easily determining the code’s purpose.

A version of the API hashing algorithm written in Python [7], a list of the resolved Windows API functions used in the loader [8] and the main component [9] are available on Github.

The characters of the encrypted strings are stored as an array of DWORDs and are decrypted using a key and a basic substitution cipher. An IDA Pro Python script [10] and a list of decrypted strings used in the loader [11] and the main [12] component are available on Github.

In both the loader and main components there is a list of 10 C&C IP addresses stored as DWORDs. Figure 4 shows an example from a memory dump of a loader component: 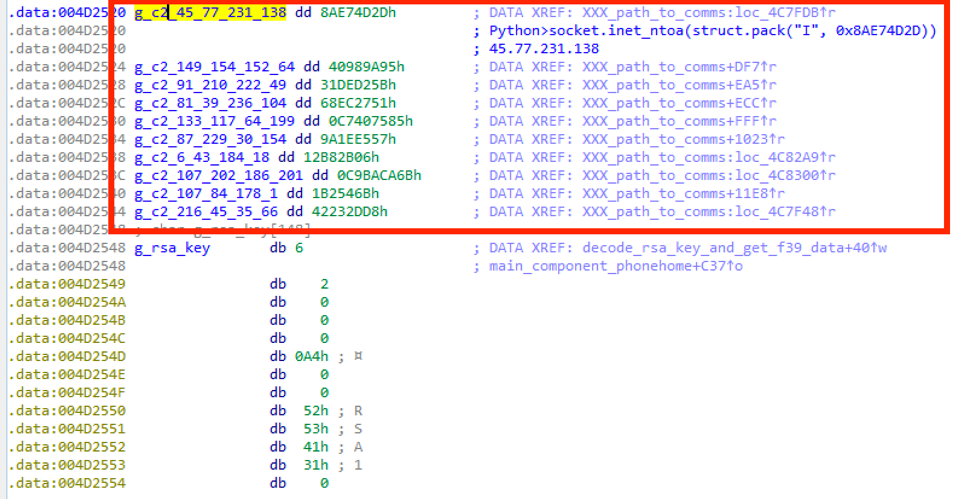 Note: Please see the “C&C Infrastructure” section for a potential caveat about these hard-coded IP addresses.

The protocol has some quirks, but in general consists of a 183-byte header followed by optional payload data. Most of the header values in a request are echoed back in the response header. If there is payload data, the format depends on the particular command.

An example of the header is shown in Figure 5. 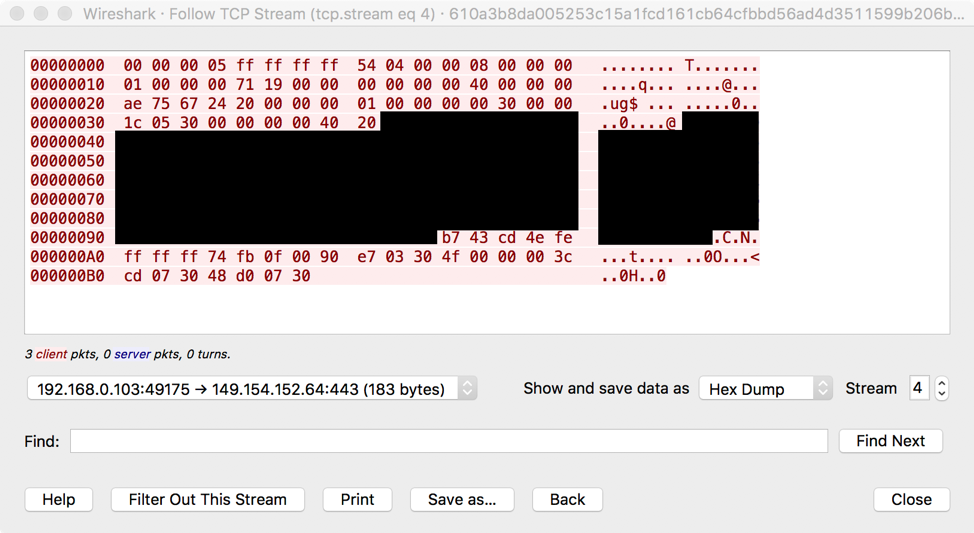 It can be broken down into the following fields:

This command is used by the loader to request the main component from the C&C server. The command argument (offset 0x24 in the header) will contain the integer “32” or “64” to request either the x86 version or x64 version of the component. The response payload contains encrypted data and an encrypted 128-byte RSA signature block used to verify the data. A decryption key is generated by the CryptDeriveKey Windows API function where it is initialized by taking the MD5 digest of the value at offset 0x5a in the header. Data is AES-256-CBC-encrypted using an initialization vector (IV) of 16 null (\x00) bytes. The decrypted data is the main component DLL which will be executed by rundll32.exe.

This is the first command sent by the main component to the C&C server. There is no data in the request or the response, so we believe this is just an initial beacon. 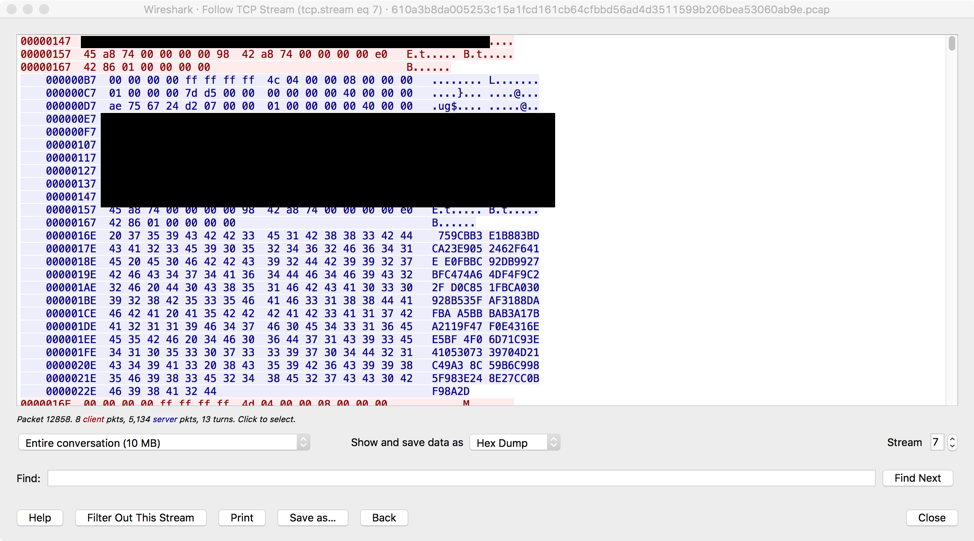 This command is used to request a module from the C&C server. To indicate what module to download, field at offset 0x5a in the header will contain a module identifier (received via command 0x44c). The response payload data will contain a 1699-byte subheader, encrypted data, and a encrypted 128-byte RSA signature block used to verify the data. Figure 7 shows an example subheader:

The following fields have been identified in this subheader:

A decryption key (used to decrypt the module) is generated by the CryptDeriveKey Windows API function where it is initialized by the following process:

Data is AES-256-CBC-encrypted using an initialization vector (IV) of 16 null (\x00) bytes. The decrypted data is optionally ZLIB compressed and once decompressed contains a module DLL that will be executed by rundll32.exe

This command is used by the malware to send data to the C&C such as the system information (Figure 3 above) or a screenshot. The request payload data contains a 656-byte subheader, encrypted data, and encrypted session key (Figure 8 shows an example subheader):Command 0x44e (1102): “Send data to C&C”

The following fields have been identified in the subheader:

While we do not have specific visibility into DanaBot’s back-end infrastructure, we have observed some noteworthy behavior that allows some speculation.

Out of the total list of possible C&C IPs, only the following 10 (4%) seemed responsive:

Interestingly, these synced up with the overlapping IP list. We also noted that the overall IP list contained some unrouteable IPs such as:

As a result of these observations, we can speculate that the main component may contain only a few real C&Cs while the rest are random decoys.

Based on distribution methods and targeting, we have been grouping DanaBot activity using an “affiliate ID” that we have observed in various part of the C&C protocol (e.g., offset 0xc of the 183-byte binary protocol header). At the time of publication, we observed the following affiliate IDs:

We observed that DanaBot samples with different affiliate IDs seem to use some of the same C&C IP addresses. At this point we speculate that DanaBot may be set up as a “malware as a service” system in which one threat actor controls a global C&C panel and infrastructure system and then sells access to other threat actors (affiliates) who distribute and target DanaBot as they see fit.

Proofpoint blogged about CryptXXX file-encrypting ransomware in 2016 [5] and noted that it shared many similarities with Reveton “police” ransomware. In particular, we noted that it was written in Delphi and used a custom command and control protocol on TCP port 443.

DanaBot’s C&C traffic appears to be an evolution of this protocol, now using AES encryption in addition to the Zlib compression. For example, in the traffic included in the Malware Traffic Analysis blog [6], the initial CryptXXX checkin format is:

The following fields are among those common to both CryptXXX and DanaBot:

The compressed buffer decodes to:

The following fields have been identified in the decoded buffer:

Later on in the communication there is a (decoded) request to download a “Stealer” module “stiller.dll”:

Thus it would seem that Danabot follows in a long line of malware from one particular group. This family began with ransomware, to which stealer functionality was added in Reveton. The evolution continued with CryptXXX ransomware and now with a banking Trojan with Stealer and remote access functionality added in Danabot.

When we first discovered DanaBot, we predicted that it would likely be picked up by other actors. Distribution of this malware has now extended well beyond Australia, with campaigns targeting Poland, Italy, Germany, Austria, and, more recently, the United States. DanaBot is a banking Trojan, meaning that it is necessarily geo-targeted to a degree. Adoption by high-volume actors, though, as we saw in the US campaign, suggests active development, geographic expansion, and ongoing threat actor interest in the malware. The malware itself contains a number of anti-analysis features, as well as updated stealer and remote control modules, further increasing its attractiveness and utility to threat actors.